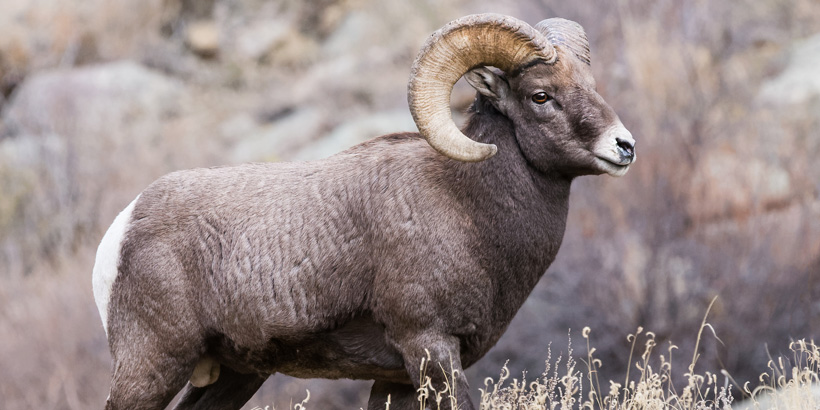 After a significant decline in bighorn sheep numbers across western North Dakota due to bacterial pneumonia, there’s a light at the end of the tunnel: herds are holding steady and slowly beginning to rebound. This week, the North Dakota Game and Fish Department (NDGFD) announced that the 2019 bighorn sheep survey found 290 bighorn sheep – “up 2% from 2018 and 3% above the five-year average,” the Grand Forks Herald reports.

“The increase in the 2019 count reflects lessening effects of bacterial pneumonia that was detected in 2014,” said NDGFD big game biologist Brett Wiedmann.

According to the Grand Forks Herald, biologists tallied 77 rams, 162 ewes and 51 lambs during the annual survey, counting a grand total of 290 bighorn sheep. That number doesn’t include 30 additional bighorn sheep in both the North Unit of Theodore Roosevelt National Park and the other 30 bighorn sheep recently relocated to the Fort Berthold Indian Reservation. However, while the northern Badlands population increased by 12% since 2018, the southern Badlands population hasn’t fared as well, dropping “again to the lowest level since 1999.”

“The total count of adult rams unfortunately declined for a fourth consecutive year in 2019, but adult ewes remained near record numbers,” Wiedmann said. “Most encouraging was the significant increase in the lamb count and recruitment rate following record lows in 2016 and 2017.”

Wiedmann points out that some of the rebound could “indicate the population is becoming somewhat resilient to the deadly pathogens first observed in 2014.”In fact, according to Wiedmann, Mycoplasma ovipneumoniae, which has caused massive die-offs in countless bighorn sheep herds across the West, hasn’t been found in the area in “most of the northern herds” for the past two years and none of the current bighorn sheep show any symptoms of the disease.

“However, the next few years will be important in determining if the state’s population shows signs of recovering from the disease outbreak,” said Wiedmann, “or if the pathogens are likely to persist and cause a long-term population decline.”

While a bighorn sheep hunting season is still scheduled for fall, it could be canceled if biologists find “a recurrence of significant adult mortality from bacterial pneumonia.” NDGFD will make the call by Sept. 1, 2020, after they complete the summer population survey.