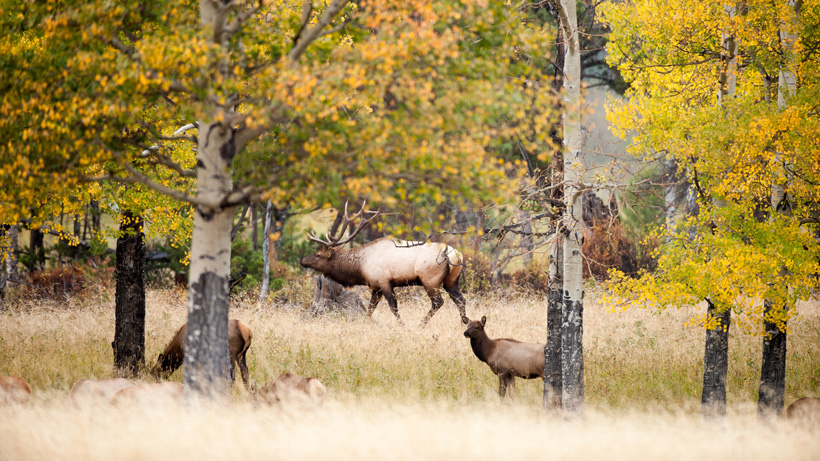 Each spring, thousands of elk start their annual migration, surfing the green wave as the foliage begins to spread through areas in and around Yellowstone and Grand Teton National Parks. While they’re following historic migration routes—pathways that have been passed down from mother to young—a new University of California-Berkeley (UC Berkeley) study shows that migratory elk are also using “environmental cues, including a retreating snowline and the greening grasses of spring” to determine when they’ll make these annual treks—signals that are changing due to changes in climate, according to Berkeley News.

For the study, researchers gathered GPS tracking data from over 400 animals that were in nine major Yellowstone elk populations. Coupled with satellite imagery, they were able to “create a comprehensive model of what drives these animals to move” and published their findings in the journal Global Change Biology.

They found that, while the timing of these environmental signals may be changing, there is a high level of adaptability within elk and this ability will likely allow them to survive climate changes and modify their behavior to complement current conditions. However, these changes could have “unknown ripple effects in local economies and throughout the Greater Yellowstone Ecosystem (GYE),” which is considered “one of the last remaining large, nearly intact ecosystems in Earth’s northern temperate zone,” encompassing nearly 18 million acres of land, according to Berkeley News.

“The decisions that these animals make about when to migrate are absolutely dependent on changes in the landscape, changes that are ultimately governed by the climate,” said Arthur Middleton, an assistant professor of environmental science, policy and management at UC Berkeley and senior author on the study. “And in the future, with climate change, we should expect the timing of these mass movements to be altered, which will affect the other wildlife and the people who depend on them, including predators, scavengers and hunters across the ecosystem.”

Numerous studies have been conducted on various elk herds and their migratory patterns, but this is the first to look at it from an ecosystem perspective. Middleton partnered with state and federal agencies within the Yellowstone area to gather as much information as possible, working with wildlife managers to “pool information on 414 elk” within the nine herds that wore GPS collars between 2001 and 2017.

Gregory Rickbeil, a postdoctoral researcher in Middleton’s lab, was in charge of analyzing data to figure out when every single elk made its way from winter to summer range and then back again using satellite imagery. While he confirmed that green-up was definitely the spring starting factor and snowfall and hunting pressure was synonymous with their return to winter range, he noted that “the team was surprised by the extent of the elks’ flexibility” in when they actually migrated. For instance, during the study, Middleton discovered that elk reached their winter ranges 50 days later in 2015 than in 2001—something that had been identified by local wildlife managers, but not yet confirmed on the ecosystem scale.

“We’ve been observing a lot of really interesting changes over the past decade about the way that elk are moving across the landscape, specifically of the timing of the migrations,” said Alyson Courtemanch of the Wyoming Game and Fish Department. Courtemanche manages the GYE Jackson elk herd and provided GPS data to Middleton for the study. “This analysis helped confirm a lot of things that people on the ground had suspected were happening, but that weren’t really quantified.”