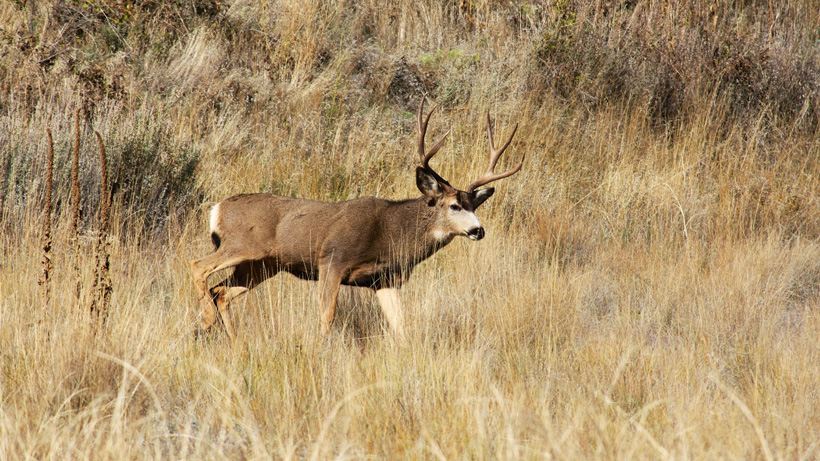 A new study recently found that gas pads play a major role in mule deer forage in Wyoming. The paper, “Where to forage when afraid: Does perceived risk impair use of the foodscape?” was just published by the journal Ecological Applications. University of Wyoming research scientist Samantha Dwinnell, lead author of the paper, says “that the role of food was a ‘missing link’ in past research that investigated how energy development affects deer,” the Jackson Hole Daily reports. During the study, Dwinnell discovered that because winter ranges are restricted based upon vegetation, topography, snow cover, etc., once gas pads, roads, pipelines or other industrial infrastructure interrupt those areas, “the ranges functionally shrink.”

“Are they no longer using the landscape the way that they would be, without that disturbance present on it?” Dwinnell asked rhetorically in an interview with Jackson Hole Daily. “And that’s what we found with this research…We’re seeing they’re not really taking that risk and using that food that’s available to them there.”

However, while Dwinnell discovered “a 4.6-fold ‘indirect habitat loss’ multiplier that extends beyond the actual footprint of disturbed areas,” no area had the same results and, instead, varied considerably from one gas field to the other. For example, according to the Jackson Hole Daily, the 200,000-acre Bureau of Land Management property located south of Pinedale (where the Pinedale Anticline deer population dropped by 36% during a 15-year period while the field was being “drilled out”) had about 20% of sagebrush shoots left on the stem. Yet, on the Wyoming Range winter habitat, which overlaps the Labarge Oil and Gas Field, “only 4.3% of mule deer forage was eschewed.” In the southern portion of that range, deer functionally lost about 11% of their habitat.

Dwinnell also noted that topography seemed to play a role in which range was least affected. For example, the Anticline is “the flattest landscape” and “where the most mule deer forage goes unused” while the northern Wyoming Range is more “rugged and hillier.”

“I wish we knew why,” Dwinnell said, who acknowledged more research needed to be completed. “It’s probably a combination of a lot of things. It’s hard, because these animals, they use senses that we humans aren’t quite as in tune with.”

Fortunately, the study’s findings did find that certain steps already taken by the oil and gas industry like directional drilling has helped “minimize habitat degradation,” according to the Jackson Hole Daily.

“Development is occurring on these landscapes — it’s inevitable, a needed resource and a huge part of the state’s economy,” said Dwinnell. “Really what this research is providing is a more realistic understanding of what we can expect when this development happens.”