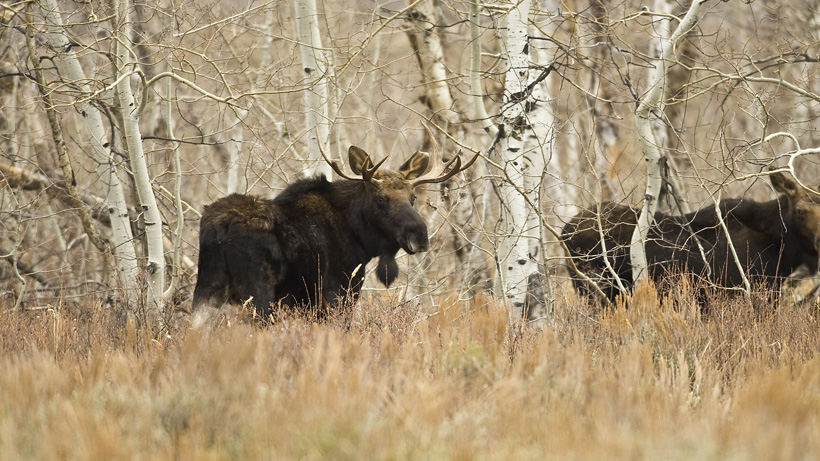 There are moose in Nevada. Yes, you read that right. There are moose living in Nevada — about 40 to 50, according to the cumulative data of Nevada Department of Wildlife (NDOW) big game biologists Kari Huebnar, Travis Allen and Cody Mckee. Sightings of the largest species of the deer family in the Silver State began in the early 1950/1960s and have been steadily increasing in recent years. With over 300 citizen-scientist reported sightings, there is hope that a population of moose is creating a foothold in the northern parts of the state.

Last January, NDOW carried out a collaring project on the moose population. With four successfully collared cow moose, data is coming in every day, giving biologists a better idea of where these moose live, if they are permanent residents of the state or if they’re just semi-annual visitors from Idaho. The department looks forward to potentially collaring bull moose in the future. Without these collars, tracking the population becomes extremely difficult. Cow moose tend to have a small range compared to young bull moose that are known to travel miles each day during the rut. Any sightings of moose should be reported to either the NDOW Elko field office, NDOW headquarters in Reno or online.

Sightings this last spring increased with several cow moose being spotted with newborn calves — a promising sign for a resident population. Biologists strongly recommend caution if you do see a cow moose with a calf. The animals are well known for being extremely aggressive towards anything that comes between it and its offspring. If you happen to sight a cow moose in the spring, watch for its ears to be pinned to its head, raised hackles or if its licking its snout. These are signs of aggression and, more than likely, an impending charge. A moose can run up to 35 mph, are known to swim up to 10 miles at a time and can dive up to 20’ deep. The best practice in the event of a moose attack is to run and find cover behind a tree, a car — whatever you can find. Standing your ground against a moose will more than likely result in serious injury and, in some cases, even death.

As hunting season kicks off here in Nevada, there are sure to be increased sightings and run-ins with moose. For hunters, species identification is a concern surrounding moose. Although it is a low occurrence, it is important that when you take to the field you are aware of what animals are out there. Most frequently, hunters have mistaken cow moose for cow elk. Moose are most prevalent in northern Elko and Humboldt counties. For help identifying the differences between the two species, watch this video by the Utah Department of Natural Resources.