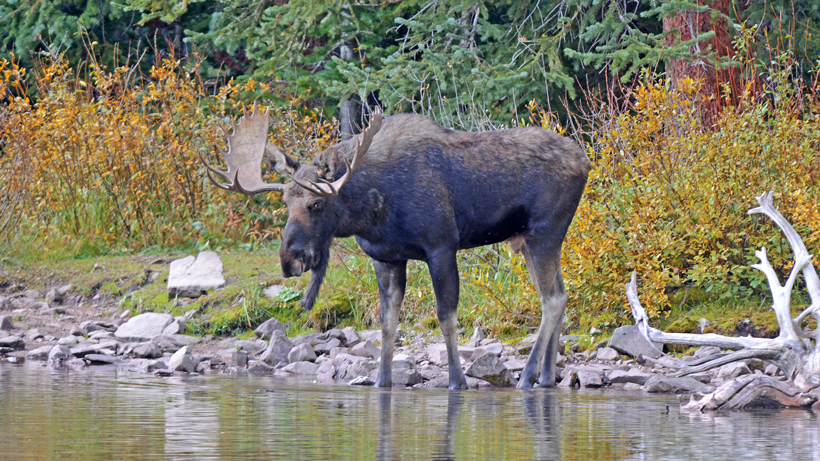 Wildfires in Quesnel, British Columbia (BC) have resulted in a decision by the ?Esdilagh (Alexandria) First Nation to ban moose hunting within traditional territory in the Cariboo Chilcotin. The community is located closest to the Tautri Complex fire, which combined with the Plateau Fire – the largest fire in BC’s history, the Williams Lake Tribune reports.

The announcement was made following an Oct. 5 community meeting and, according to the press release, the decision seems justified. “The community discussed this season’s wildfires, the effects it has had so far within their traditional territory and the devastating impact it will have on moose,” states the ?Esdilagh press release. “Moose populations in ?Esdilagh’s territory are already at an unprecedented low level, and as a result of the 2017 firefighting, there are many new roads and access to sensitive moose habitat.”

?Esdilagh, one of six Tsilhqot’in Nation communities that are represented by the Tsilqot’in National Government (TNG), is following the hunting ban recommended by TNG chair Joe Alphonse. British Columbia’s Ministry of Forests has already shut down Zones A and C of Management Unit 5-13 effective Oct. 15 to 31 and Nov. 1 to 15; however, Zone B in both MU 5-13 and MU 5-14 continue to remain open to those with limited entry moose tags, causing ?Esdilagh members to question why the zones are still open.

In fact, the inaction by the Ministry of Forests to close Zone B in both of these units has caused Chief Roy Stump to stress the importance of maintaining habitat for moose in the impacted area.

“We are willing to forego our Aboriginal rights to hunt moose and we expect the Province to rescind the remaining 2017 Limited Entry Hunt authorizations for conservation purposes,” Stump stated in a press release. “We also expect B.C. to commit substantial resources to work with us to protect and conserve the moose population.”

In addition to this moose ban, the Xeni  Gwet’in (Nemiah) First Nation is planning to announce a ban on moose and mule deer doe hunting through until May 31, 2018, the Tribune reports.