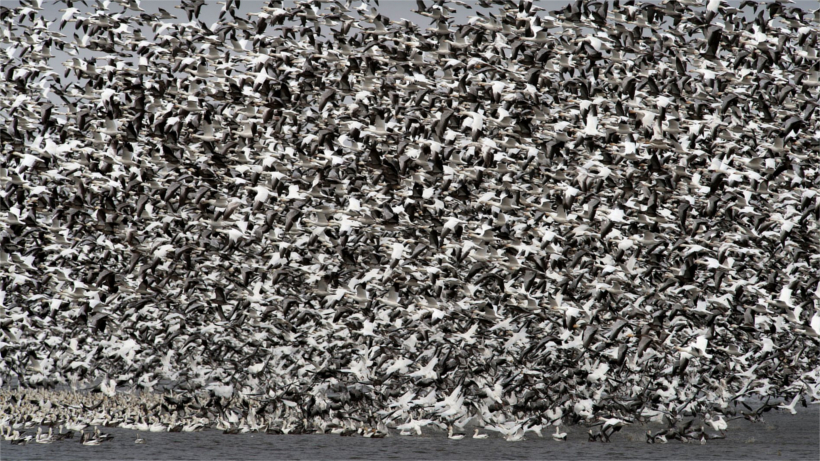 A winter storm diverted thousands of snow geese to their death in on Nov. 28 when they sought refuge in the Berkeley Pit in Butte, MT. The old mine pit is a toxic graveyard, filled with decades of environmental waste, turning the 700-acre pit into an acidic – and unhealthy – environment.

According to the Washington Post, between 1955 and 1982, 300 million tons of copper ore were removed from the 900’ deep pit, which then filled with floodwater contaminated with arsenic, cadmium, cobalt, copper, iron, zinc and other inorganic compounds. The pit is a death trap for any animal, particularly waterfowl who seek smaller bodies of water to take refuge upon during migration, which is what happened in late November.

Mark Thompson, an environmental affairs manager for mine company Montana Resources (the company responsible for the Berkeley Pit), told The Guardian that employees have been using spotlights, noisemakers and other distraction methods to keep more birds from landing in the pit. While the pit falls within the snow geese migration route, it appears that the number of birds within the area – nearly 25,000, according to reports – was higher than usual this year; about 10,000 birds landed in the pit.

“I can’t underscore enough how many birds were in the Butte area that night,” says Thompson. “Numbers beyond anything we’ve ever experienced in our 21 years of monitoring by several orders of magnitude.”

As of Nov. 29, 90% of the birds had been scared off, according to The Guardian, but that doesn’t mean that the death count is over. The Montana Standard reports that dead birds have been found “in a Walmart parking lot, on roadsides and outside the city,” suggesting that birds coming into contact with pit water doesn’t equal instant death.

"Trying to get some idea of mortality has been difficult," EPA Montana Superfund director Joe Vranka told the Billings Gazette. The pit was already considered a federally managed Superfund site and the EPA will continue to investigate the incident.