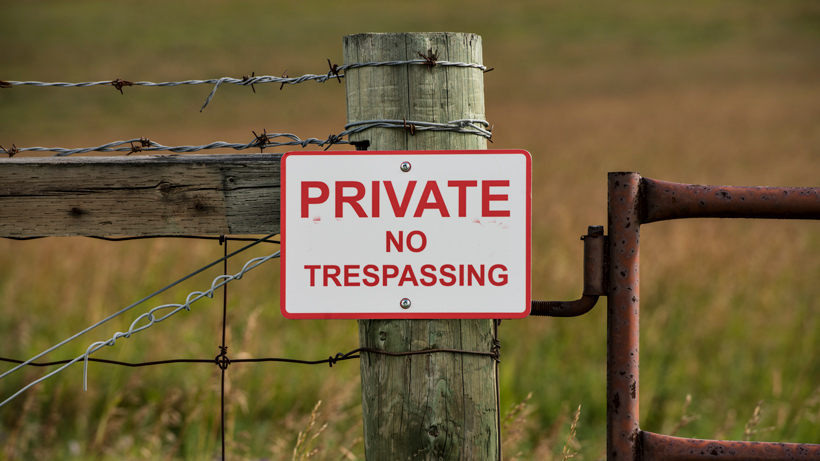 Legal jargon has very specific definitions and a single word may be a turning point in public land access. A Montana public easement dispute between the Wonder Ranch LLC and the U.S. Forest Service is hanging on the decision of a three-panel court regarding the definition of the word hostile, the Billings Gazette reports.

Christopher Stoneback, the Billings attorney representing Wonder Ranch, seeks to overturn a 2016 ruling that says the Forest Service has a prescriptive easement over the ranch’s property to access the Lee Metcalf Wilderness Area at Indian Creek in the Madison Mountain Range. Stoneback says that “there was no evidence in the record proving that use of the trail by hikers, hunters, and outfitters dating as far back as 1940 was in any way hostile,” according to the Billings Gazette. Hostile, which can mean a claim of ownership even over the holder of the recorded title, can be applied to a piece of real property, or, in this case, this particular easement that allows the public to use it to gain access to public land.

In his brief, Stoneback says, “It is the character of the use that matters. Hostility must be proven, and it was not. The mere use of a trail, even if extensive or longstanding, is insufficient to satisfy the open, notorious, and hostile elements of a prescription claim.”

In the 2016 ruling, in order to obtain the prescription easement across a quarter-mile portion of the Wonder Ranch, the Forest Service “had to prove that use of the route had been, ‘under Montana law … open, notorious, exclusive, adverse, continuous and uninterrupted … for the statutory period,’” which, prior to 1953, was 10 years; after 1953, only five. The Forest Service’s attorney, Mark Smith, said that the longstanding use of the trail “without asking or receiving any permission is hostile” and added that people had been using the trail for decades.

However, Judge Morgan Christen pointed out an important aspect of the easement. “Maybe everyone knew that these folks were accommodating and that it was all permissive use. How do we know?”

While the three-panel court reviews the case, it’s possible that their decision could determine how other public access lawsuits are handled in the future. For example, according to the Billings Gazette, there was a prior case that took place in the Crazy Mountains. Landowners “closed off historic Forest Service routes across their property” because there was not a written easement and ended up charging a man with trespassing in 2016 when he tried to use a historic path.

The court could take several months to decide whether to overturn the original ruling. Stay tuned to goHUNT for further information.

I don’t believe the question is in regard to using the individuals property for recreational purposes. I believe they are trying to access property that the Ranch is blocking access to by allowing a public easement through property.

Here in Europe anyone can hike on private property. We have 85,000,000 people in Germany, any private forest can be hiked on by anyone even with dogs. This actually leads to a ton of problems, in other European nations a person may camp for 3 days on private land.

We do not want to get to a situation where private land owners do not have the right to restrict access to their property. This will lead in them calling anyone who walks on their land a poacher, and multiple problems with land owners hating the public and going out of their way to stop hunters.

I agree as well.

Continuous does not mean a yearly hunting trip.....

I second this though:

Make the "landowners" pay the taxes on any public lands they deny access too at fair market value.

Make the "landowners" pay the taxes on any public lands they deny access too at fair market value.

What the FS need to do is find someone who has been using that trail for over 5 years (like an annual hunting trip). If they can find someone who did that, that would be proof of use without enforcement of the private property, creating the prescriptive easement. Enforcement is key. Columbia university does it - once a year, they close down the campus and put up no trespassing signs. They issue a citation to the first person to "trespass", then open campus back up, and that serves as evidence of enforcement. If there is no evidence of enforcement by the property owner over a 5 year period, then the owner will have a hard time with this case.

I get that private land is exactly that but its compleye bulls&$! That someone can block access to public land. Seems to me like there should be some legal precedent establishing this.

I've read this a couple times and researched the case from 2016. I'm confused. It seems like the land owners were not stopping the public from accessing the trail but the Forest Service was seeking to purchase the quarter mile section of trail. Was this in an effort to ensure continued public access via the trail in the event the landowners change their mind and deny public access along the trail?