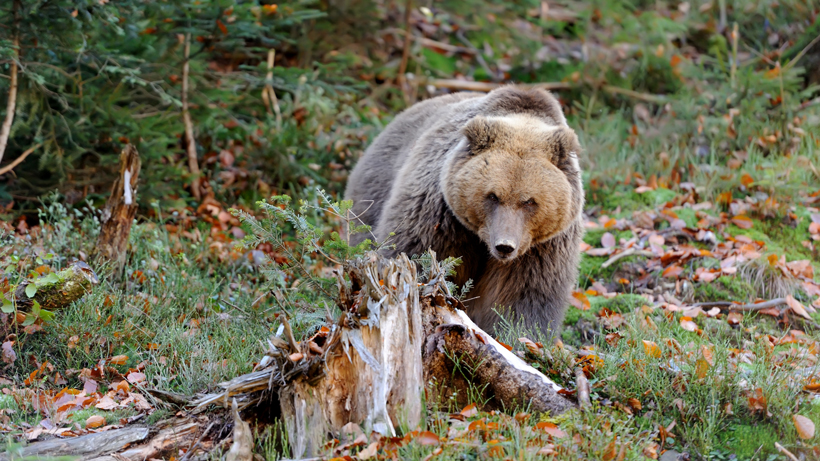 A Montana man is lucky to be alive after a grizzly bear attack this week. The attack occurred on Monday after Shannun Rammel came upon the bear inside of a barn a mile and a half from their home, the Great Falls Tribune reports.

While Rammel’s wife, Jammie, said that “her husband’s injuries are not life threatening,” the violent attack has left them “shaken.”

“As fast as that bear came out and got my husband, he couldn't have gotten to a gun even if he'd had one,” said Jammie. “My kids were home last night and I told them to turn on the flood lights, let the dogs out. I want you guys close to the house.”

The Rammels have nine children and live in the Choteau area. They were warned by a neighbor that grizzlies could be in the area after bear tracks were spotted “near the pond that lies between their two houses,” according to the Great Falls Tribune.

“Earlier he was getting water out of the pond, and he had walked around and found the bear's tracks,” said Jammie. “We’ve had grizzly bears up there before and we talk back and forth. If he sees a bear he’ll call me. He knows we have nine kids. We've got dogs, pigs, chickens and goats. It’s good that your neighbors can be aware and do that for you.”

The attack was a case of being the wrong place at the wrong time. According to the report, while Jammie and their 12-year-old daughter headed to their pickup, Shannun decided to poke his head in a nearby shed to see if any leftover grain had attracted the bear.

“He had just put his head in and looked to the left and then the right, and the bear growled and charged him as fast as it could,” said Jammie. “(Shannun) went to run but before he could he tripped. The bear blew past him then spun around and attacked.”

While Jammie didn’t initially see the bear, she did hear her husband’s screams followed by the bear’s roar.

“The bear had him and was throwing him like a rag doll,” said Jammie. “My 12-year-old daughter was standing by me. She was watching her dad and screaming her head off - 'There's a bear! There's a bear!'"

Jammie quickly put her daughter in the pickup and gunned the engine.

“My instinct was to start up my truck, drive towards him and run over the bear if I could,” said Jammie. “I knew if I got out of the truck and ran over there he would have got me.”

Jammie was able to turn the truck to face the grizzly bear where it was still attacking her husband. The revving engine distracted the bear, which then “took off through the fields,” according to the Great Falls Tribune. After it fled, Jammie proceeded with the truck, cautiously searching through the fields for husband. They eventually found him and assumed he was dead because he was lying face down on the ground. However, as they watched, Shannun slowly got up and made his way to the truck where he then moved to the driver’s seat and drove himself to “where the field met the road” before Jammie insisted she drive the rest of the way, according to the Great Falls Tribune.

“He wrapped his arm because he was splattering blood everywhere,” said Jammie. “I called the hospital and told them I was on my way.”

Once at the Teton Medical Center, doctors were able to clean his wounds and evaluate the “serious cuts and bites to his upper body.”

“The bear had bit through his palm and tore a chunk of meat out of it,” said Jammie. “He’s got four bite marks on his back, and just below his shoulder he’s got a big gash with teeth marks in there.”

Montana Fish, Wildlife and Parks is still looking for the grizzly bear that attacked Shannun. Jammie believes it’s the same bear that has caused other troubles in the area since October.

“He was tearing off grain bin doors and eating barley and wheat,” said Jammie. “FWP brought out a trap and tried to catch him for a couple of weeks, but they never got him.”

Best wishes to Shannun for a speedy recovery!