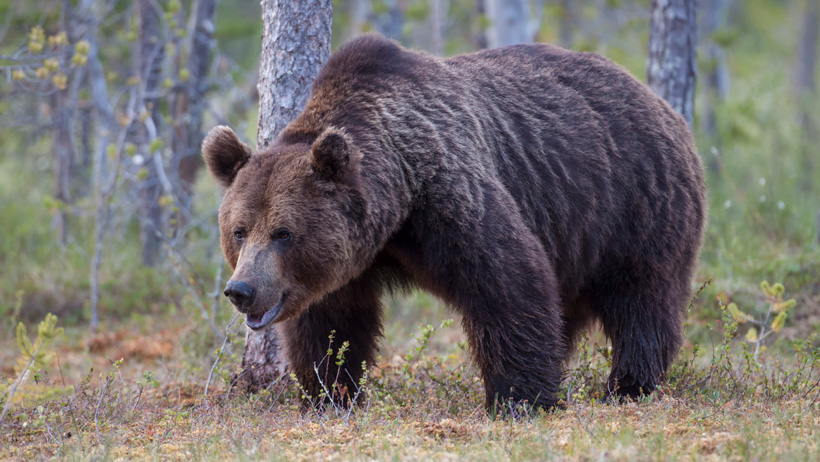 A bowhunter is lucky to be alive following a grizzly bear attack this week in southwestern Montana. Tom Sommer and his hunting partner stumbled upon the grizzly bear while looking for an elk they had been calling on Monday morning; the bear was “feeding on an elk carcass in the southern end of the Gravelly Range,” the Great Falls Tribune reports. Once the men were spotted, the bear charged.

The bear was too fast for Sommer to use his bear spray. Fortunately, his hunting partner was able to use his, which did slow the animal a bit, but not stop it completely. Sommer circled a tree twice, trying to escape, dropping his bear spray. Grabbing his pistol, he tried to defend himself, but the bear “swatted his arm down,” according to the report.

“It bit my thigh, ran his claws through my wrist and proceeded to attack my head,” Sommer told the Great Falls Tribune. ““I could hear bones crunching, just like you read about.”

Thanks to his partner’s use of bear spray, the attack – which only lasted about 25 seconds – ended. The bear scrambled off into the woods, leaving Sommer with a 16” cut in his head that required 90 stitches. Because the duo were prepared, they were able to use blood coagulation powder and a turban to stop the bleeding before walking a mile back to their spike camp and traveling another four miles to their base camp. Once there, they still have drive two hours to the hospital in Ennis, Montana.

“I’ve been a hunter my whole life,” says Sommer. “I have no grievance against the bear. He was just doing what bears do. But I would have shot him just the same.”