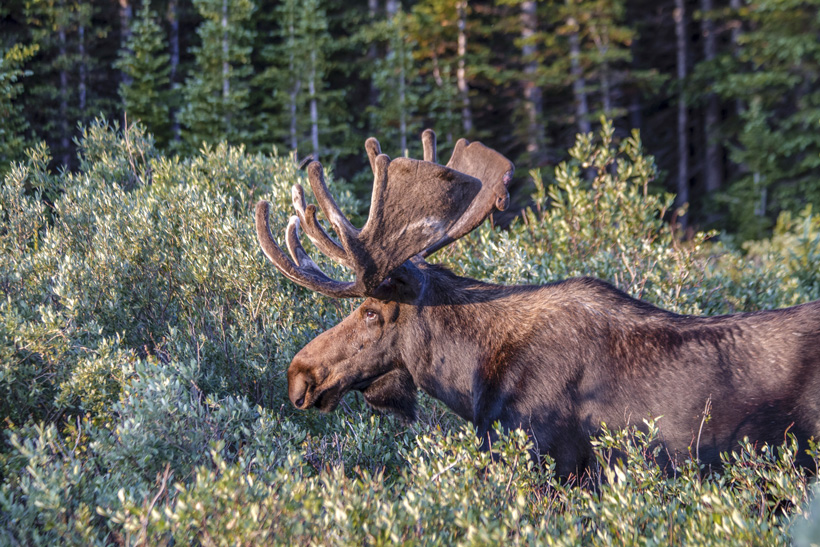 Minnesota moose are in trouble. The dwindling population has dropped nearly 60% across the state due to disease and predation, prompting U.S. Fish and Wildlife Service (FWS) to take action. Last week, FWS announced it would begin the yearlong review to determine if the northwestern moose should be placed on the Endangered Species List.

The decision to review the moose population follows a petition filed last year by the Center for Biological Diversity (CBD) and Honor the Earth that asks the government to add the moose – specifically the subspecies Alces alces andersoni, which is found in Minnesota, Michigan’s Upper Peninsula, North Dakota, Wisconsin and Isle Royale in Lake Superior – to the Endangered Species List in order to guarantee their survival.

Collette Adkins, a biologist and attorney with CBD, told Minnesota Public Radio that adding moose to the list is the best preventative action to total extinction.

"We've seen how the Endangered Species Act has saved the wolf, and I think it can save the moose too," says Adkins. "Even though this is sad that moose need this protection, it's good news they're likely to receive it."

FWS agrees that the moose decline cannot be ignored and responded to the petition by saying, “Based on our review … the petition presents substantial scientific or commercial information indicating that the petitioned action may be warranted for the U.S. population of the northwestern moose.”

While the yearlong “status review” of the Midwest moose is underway, it could take years for the animals to officially be listed as an endangered species. This does little to help the current population. Fortunately, the Minnesota Department of Natural Resources (MDNR) is in the middle of a multi-year,multi-agency study to figure out why so many moose are dying. According to the West Central Tribune, factors affecting moose mortality range from predation by wolves to conditions like brainworm, winter ticks, bacterial infections and liver flukes. In addition, researchers have discovered a link between warm winter weather and overall moose nutrition and health.

Rich Baker, who works as the MDNR endangered species coordinator, says that “the agency will comply with the federal request for data on the issue,” but also acknowledged that FWS’s request is only the first step towards any type of solution. While overall moose numbers showed a small improvement during the 2016 count (which estimated approximately 4,000 moose up from 3,450 in 2015), those directly involved with the moose conundrum believe that an uptick in numbers won’t last, especially since there were about 9,000 moose in the state nearly a decade ago.

“Moose are not recovering in northeastern Minnesota,” says Glenn DelGiudice, MDNR’s top moose researcher. “It’s encouraging to see that the decline in the population since 2012 has not been as steep. But longer-term projections continue to indicate that our moose population decline will continue.”

For now, data will be collected and FWS will turn its attention towards determining whether moose should be awarded protected status. With the dwindling numbers and little hope for an increase, it’s likely that the moose will eventually be listed as endangered.