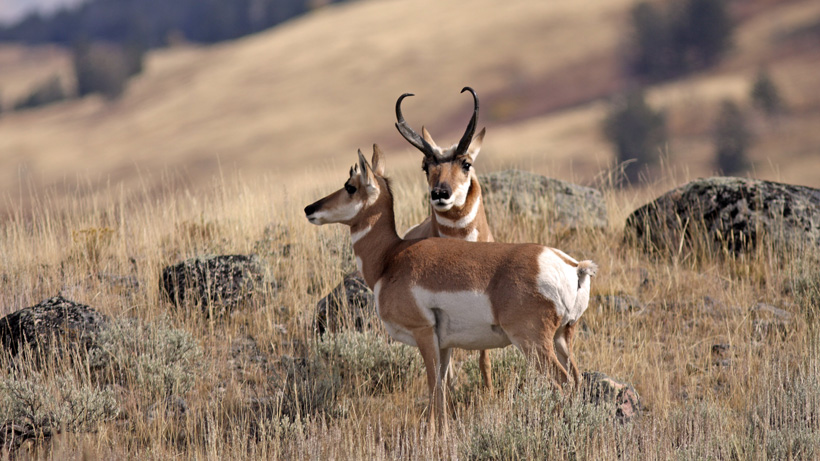 A new study is underway in Idaho to determine antelope migration patterns. The hope is that through data collected via GPS collars, Idaho Department of Fish and Game (IDFG) biologists will be able to build a comprehensive database that can be used to gain a better understanding of how to manage the species and protect important habitat, the Associated Press reports. It will also help other agencies, like the Idaho Department of Transportation, understand migration hotspots in order to make safer wildlife crossings, particularly along U.S. Highway 20.

This summer, biologists worked with a helicopter crew to capture and collar 24 antelope in Camas and Blaine counties. They believe that antelope from these counties winter in Elmore and Jerome counties, but don’t have data yet to support this “anecdotal” information, according to the Associated Press. While costing the agency about $1,000 to capture and collar a single antelope, the effort could help them identify critical habitat in the Magic Valley, particularly where new solar, wind and hydroelectric projects could be developed in the next few years. Projects like these impact antelope, particularly when it interrupts key migration corridors.

“It will help us try to guide development in these areas that are really critical to pronghorn,” said IDFG Regional Wildlife Biologist Sierra Robatcek.

Capturing and collaring antelope can be tricky—due to their speed and their fragility. Because they’re incredibly fast and can run up to 60 mph, IDFG biologists didn’t chase the targeted animal for more than three minutes since they “can literally run themselves to death” due to a build-up in lactic acid, which causes a slow and agonizing “muscle death.”

“Capture is kind of bittersweet,” said Robatcek. “It’s really fun to be interacting with animals that closely—that’s why I became a biologist. But there's also this risk to the animal and to the people.”

Upon capture, biologists worked quickly to calm the animal by blindfolding it before attaching the collar, tagging its ear and taking fecal and blood samples. Once the minutes-long procedure was complete, the animal was carefully released and took off quickly, running back to its herd.

“Our priority is keeping the animal alive,” said Robatcek. “There’s no point in putting a collar on a dead animal.”

And, now, biologists wait, collecting data and keeping tabs on the collared antelope, ready to figure out key information in migration patterns.

It's about time IDFG pulled their head out of their ass and concentrated more effort on the pronghorn instead of just the elk and mule deer. Pronghorn really need a lot of help to get the numbers back here in in Idaho.