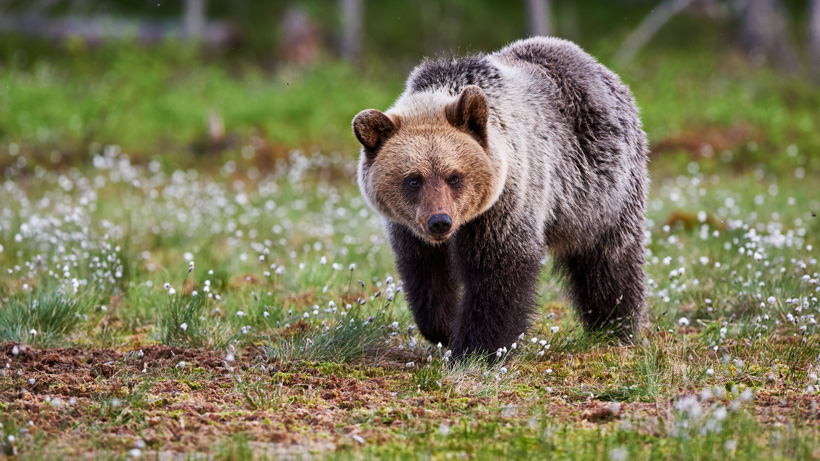 A road closed in the late 1980s to protect endangered grizzly bears will be reopened for security reasons. The road, which snakes through the Selkirk Mountains in Idaho, runs between Upper Priest Lake and the Canadian border. The U.S. Department of Homeland Security ordered the U.S. Forest Service to re-open the long-abandoned 5.6 miles of Bog Creek Road because of “legitimate threats to border security,” The Spokesman-Review reports.

While the road, which is located in Boundary County, will not be open to the public and only “available for administrative use to allow” border patrol officers “to meet their statutory mission,” the Forest Service plans to begin repairing the road riddled with alders and other vegetation. This work includes the installation of six new culverts and replacement of six of the 67 corrugated metal pipe culverts as well as trimming trees and brush so they do not block the road, according to The Spokesman-Review.

However, not everyone is happy with this decision and the Idaho Conservation League (ICL) has threatened legal action to stop it.

“This project will reduce the amount of habitat available in the most important grizzly bear management unit in the Selkirk Recovery Zone,” said Brad Smith, ICL’s North Idaho director.

Smith added that the Forest Service did close a “number of administratively used roads” in order to “meet grizzly bear recovery standards,” but that those specific roads do not actually matter to grizzly bears.

“The Forest Service and the Border Patrol had an opportunity to close other roads and mitigate the impact on grizzly bears,” Smith said in an email. “Unfortunately, the agencies chose to ‘close’ roads that are either already undrivable or will provide little or no habitat value to bears.”

Back in 2016, former biologists with the Forest Service objected to reopening the road, explaining that “the interests of wildlife, wild areas and border security are best served by not opening the Bog Creek Road” and to open it would be a violation of the Endangered Species Act.

“Even the government’s own analysis shows that this project will harm federally protected grizzly bears for years after the project begins,” said Andrea Santarsiere, a senior attorney at the Center for Biological Diversity. “We are currently considering our options, which may include a lawsuit to prevent the harm that this project would cause to Idaho’s wildlife.”

Yet, Border Patrol said that “no particular incident prompted the request to reopen the road,” according to The Spokesman-Review, and that they had no plans of using the road during the winter. Further, agents wouldn’t “be going ‘back and forth on it.’” The current Border Patrol station is at Metaline Falls, Washington. Agents at that station are in charge of patrolling east of Bog Creek Road.

Klaus D. Thanks a lot. This is a very good initiative. The matter of saving these animals is first of all the matter of the local authorities, but we cannot be indifferent.

I am very glad that the road is finally open. I was very worried about these bears and I am very glad that it is for administrative use only. At the same time, a lot of animals continue to get lost along forest roads, and this needs to be addressed. A lot of casino games from Berlin are ready to support the project and give all the money from the buran casino to save the animals: "Wir sind bereit, unsere Investitionen zu tätigen und Tiere zu retten, dank der Website https://ipayzz.com/de/buran-casino/ , auf der wir dies tun können".

Nicholas W. hit the nail on the head below...Grizzly bears are not endangered. They should be exposed to human pressure and be hunted so that some fear is re-instilled into them. Generations of griz have now lived with no fear of humans. This is not a good thing if you play for "Team People", and you generally care about the well-being of people over bears. Those who place the protection of griz over everything else likely don't spend much time in griz country, and are the last people that should weigh in on the subject.

Public land. Tax dollars used to maintain it the road. Open it to the public.

"Hard science" can be skewed in many ways.

The conclusions made in environmental science are rarely hard...... and rarely based in science.

Edit:
Post below should have read, "...Is not just motor vehicle vs bear collisions".
Roads also increase access, even limited use roads.
My contention is more about gov't wasting tax dollars since I am old school fiscal conservative combined with keeping US gov't small. If this road was so necessary for national security, then why is it only open maybe 5 months of the year? Because its not about national security as much as it is about convenience. Now, for myself, I place protecting wildlife populations far above some bloated government agency convenience.

Christopher,
Could you do me a favor and explain what those abbreviations mean? You are obviously from a different generation than myself. BTW, you are not at a ballgame, there are not just two teams here.

As for a "crisis", do you need a paperbag to breath into? No crisis was reported, simply a road that was closed by the USFS based on hard science for the benefit of game populations has now been re-opened at taxpayer expense. If you educate yourself rather than go off half-cocked, the article and it links describe the effect on bear populations is not motor vehicle vs bear collisions.

Be careful of identity politics. God gave you a brain and critical thinking skills.
Don't waste them.

Clutch, tell us all how a gated road corridor less than 6 miles long is going to increase vehicle/ bear collisions. I'll wait. You're obviously a Y2Y proponent and most likely a BHA supporter. Once again, fabricated crisis over a gated road corridor closed to the public. Maybe mtn bikers will run over a few, eh?

On second thought, just keep inventing your own narrative against those “Greenies” since its alot more fun to read.

Gotta love the greenies logic. This 5.6mi road is going to block travel by bears along the whole ecosystem that stretches hundreds of miles. The bears will use that road more than DHS. Oh the sensationalism.

Sounds like a big waste of my tax dollars to open a road which will not be open to the public nor will “Agents be going back & forth on it” and will have a seasonal closure for 5-6 months every winter.

It certainly does not sound necessary. I remember back when the Republican Party practiced fiscal conservatism.

Forget hunting, grizzlies, or wildlife in general. DHS mission includes protecting our borders from terrorists - lets support the men and women trying to keep us safe. This is something that we (stupid anti-hunters and stupid hunters) should be united in.

Well, IMO Grizzlies are not endangered anymore and need to be hunted. I would like to see that road opened to the public, and to hunters. The only threat to the wildlife is still considering the Grizzly Bear endangered.