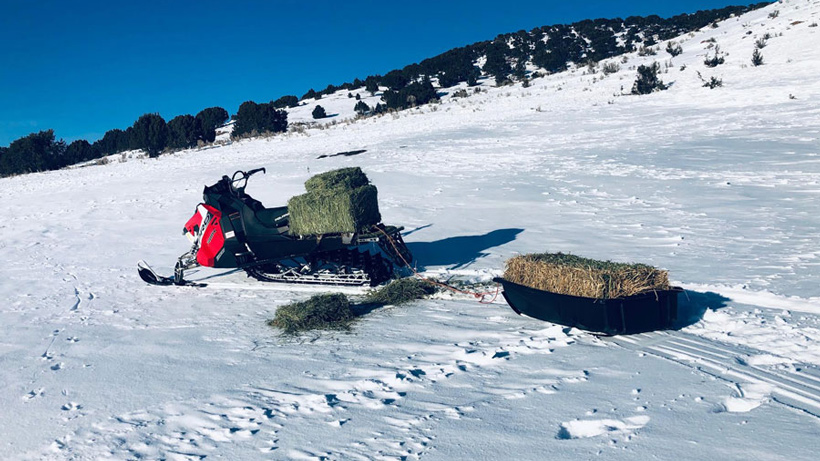 Want to entice elk to move from one area to another? Use hay—an alluring elixir that, according to the Idaho Department of Fish and Game (IDFG) “can be like ice cream in a sea of carrots,” East Idaho News reports. The bait is being used to lure 200 elk away from a cattle operation in Caribou County, Idaho to limit the possibility of spreading brucellosis between elk and cattle as well as protect the cattle’s feed source.

“Elk are often times attracted to private property, especially in the winter time when there might be haystacks, or in this case, there is a cattle operation with a feed line,” said IDFG Southeast Region Communications Manager Jennifer Jackson.

While not ideal to feed wildlife, sometimes, it’s necessary. Unfortunately, once a few elk discover haystacks or feedlines on private property, that means others tend to follow, which is what happened on this particular Idaho property. Working with the Idaho Winter Feeding Advisory Committee, IDFG set up a temporary bait line of hay using a snow mobile.

Jackson told the East Idaho News that IDFG and the Winter Feeding Advisory Committee will continue to monitor the bait line and “will bait until conditions change,” elk lose interest in the offered food or move into higher county as the snow melts.

“It is the end of February but we’ve had a lot of recent snow and storms happening,” said Jackson. “We just take it day by day.”

There is a situation just west of Denver, CO about 30 min. The past couple of weeks Ive seen a nice size heard of elk sharing a pasture with a bunch of captive buffalo.. hmmm