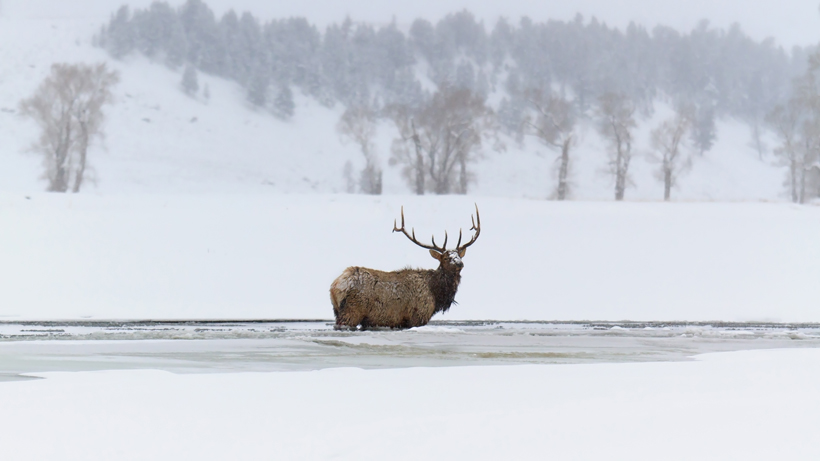 With winter still lingering in northwest Wyoming, wildlife managers are started to get worried. Deep snowpack from several recent storms and freezing temperatures are keeping food out of reach for elk, mule deer, moose, and other wildlife. In fact, snow depth is deeper in some places than it has been in “all but four other March 28 dates documented during the last century,” the Casper Star Tribune reports. Between hard ice covering soft snow in places, creating difficulty for both food and movement, the unfortunate reality has surfaced: wildlife death rates are on the rise within certain areas of the state.

According to the Casper Star Tribune, three out of the 10 adult doe mule deer and seven out of the 10 fawn deer being tracked by University of Wyoming biologists have already died and the winter mortality rate in mule deer in the Sublette Herd has also increased.

“The bottom line is we are expecting above average mortality, again, in the Sublette Deer Herd,” said Brandon Scurlock, the Wyoming Game and Fish Department’s (WGFD) wildlife coordinator for the Pinedale Region.

“It’s unfortunate that we had a severe 2016-17 winter, and then this winter,” said Scurlock. “It’s another setback, but at least with deer and pronghorn those populations are plastic and cyclic, and it’s part of the natural cycle. They will come back.”

In fact, “Mo,” the five-year-old mule deer doe that stole hearts on social media is one of the latest casualties. The Wyoming Migration Initiative had used the mule deer as a way to share migration patterns with the general public. It’s unknown what exactly happened to her. When her GPS collar indicated there was a problem, all researchers found were her collar and some hair, according to the Casper Star Tribune.

However, there’s still some optimism among WGFD biologists. The Wyoming Range has roughly a 70% survival rate among collared fawns and all of the collared adults are currently alive. Deer herds within the Star Valley and Snake River Canyon are hanging on. Elk are doing OK, but, unfortunately, moose are another story.

According to WGFD biologist Gary Fralick, “moose are having a ‘pretty rough go of it,’ and are tick-infested and trying to live amid human development.”

“I think it has to do largely with the dramatic [mid-winter] changes in snow conditions,” added Fralick. “It pushed them into areas that are stressful to make a living in.”

The reason they feed the Elk in Jackson is to keep them from Migrating through the nice mountain town of Jackson not because they need the extra nutrition.

They should limit/eliminate the doe kill statewide to allow them to recover.

Its literally that simple.

Feeding the wildlife does not help. You create dependence from it. There are some states that do feed white-tails, bison or elk. Example MN, ND & SD the reason behind it is to keep the critters out of the farmers/ranchers hay storage. Pittman Roberts act is for restoration and improvement of wildlife habitat not for supplement feed for wildlife during a harsh winter.

Why doesn't the department of Game and Fish feed these animals just enough to get them through this harsh winter? Isn't that why we buy conservation and habitat stamps! We feed the elk and Bison in and around Jackson Hole, plus the winter of 79 the deer were feed supplement feed to get them through. Also, isn't that why we pay tax info the Pittman Roberts Act? Or are we saving that money to reintroduce more darn wolves???