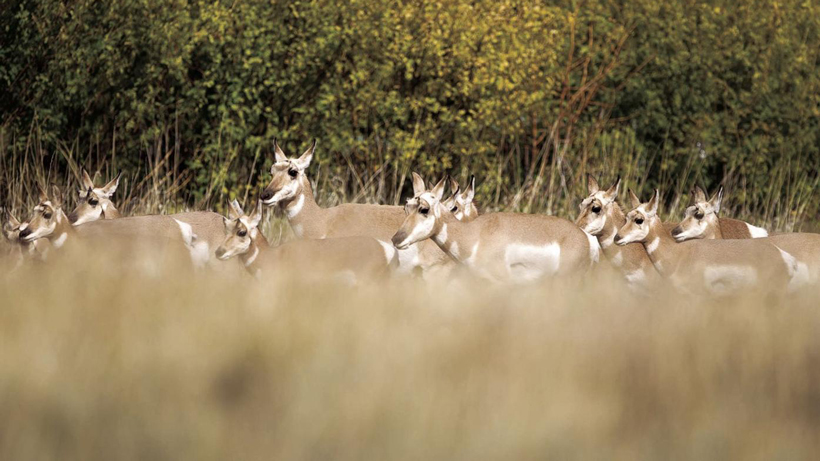 Wildfires play a role in habitat renewal and, in Wyoming, that’s exactly what’s happening following last year’s Mullen Fire, which burned over 176,000 acres in the Snowy Range. The large fire scorched acres of invasive grasses, allowing for habitat regeneration in the burn scar left behind, which will provide long-term benefits for elk, mule deer, moose and bighorn sheep, the Rawlins Times reports.

Coupled with the Wyoming Game and Fish Department’s (WGFD) efforts to control the spread of cheatgrass in the Platte Valley, Wyoming is ahead in regard to cultivating key habitat for native wildlife. Cheatgrass, which is an invasive grass that often “outcompetes native species” that local wildlife depend on. It grows fast and dries out quickly, creating early “fire danger,” according to WGFD’s habitat biologist Ryan Amundson.

“A healthy, vigorous system should be able to combat a noxious weed invasion,” said Amundson.

Meanwhile, across southeast Wyoming, antelope herds are doing okay. The Medicine Bow herd is meeting its population objective and the Elk Mountain herd is holding steady, meaning “hunting conditions will be similar to those in recent years,” according to the Rawlins Times. However, trophy worthy antelope bucks may be scarce due to “poor spring and summer moisture,” said WGFD spokesperson Robin Kepple, who added that antelope will “likely be concentrated near wet meadows and other water sources.”

The Iron Mountain, Hawk Springs, Meadowdale and Dwyer antelope herds are experiencing a drop with low fawn recruitment. According to the Rawlins Times, these herds had increased winter mortality due to a heavey snowstorm in March that “dropped 30 inches in that region,” resulting in a reduction in the number of available hunting licenses.

In mule deer news, the Sheep Mountain, Platte Valley and Shirley Mountain herds are seeing steady increases in population and, as a result, an additional 50 licenses are available in Hunt Area 81.