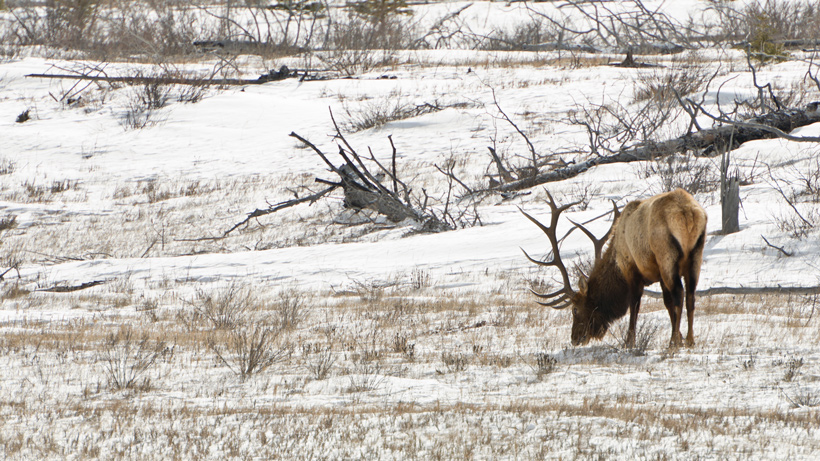 Winter can be hard, especially for elk and other animals who lack a constant feed source during extreme conditions. This is why supplemental feeding stations have been set up in places like Wyoming’s National Elk Refuge: to provide alfalfa pellets to elk that may not have another source of food. However, this week, the Sierra Club, National Wildlife Refuge Association and Defenders of Wildlife filed a lawsuit against the U.S. Fish and Wildlife Service, claiming that “the practice encourages disease,” particularly chronic wasting disease (CWD), the San Francisco Chronicle reports.

“The National Elk Refuge is supposed to sustain healthy populations of native wildlife, not spread infection of lethal disease,” said attorney Tim Preso with the environmental law firm Earthjustice, which is representing the environmental groups.

CWD has impacted elk, deer and moose across the nation, resulting in mandatory testing, herd culls and other management strategies to keep the fatal disease from spreading. The lawsuit alleges that by providing this supplemental winter feed in the refuge, it creates an unnatural elk concentration and could cause more issues among healthy animals. According to the San Francisco Chronicle, the groups have filed the lawsuit to make FWS go through with a 2008 commitment “to gradually decrease elk feeding on the refuge in coordination with the Wyoming Game and Fish Department.”

While the refuge didn’t feed elk last winter because conditions weren’t that bad, they did begin the supplemental feeding program this February due to heavy snow. According to the San Francisco Chronicle, roughly 5,000 elk utilized this extra feed.  The supplemental feeding program was initially created about 50 years ago to keep hungry elk away from ranching and agricultural operations.

I believe there are 17 feed grounds in Wyoming and not 1 confirmed case of CWD. I know the antis are hoping and praying for it so they can say I told you so. There is no where for the Yellowstone herds to go. They are landlocked at Jackson and traditional winter range is unobtainable. Hunters are not going to sit by idly and let these animals starve. And we sure as hell are not going to listen to radicals from California on what is best for our elk.

None of you guys are focusing on the issue they brought up. The spreading of CWD. They ain't wrong.

It could be good. The elk will continue into Jackson, followed closely by the wolves and grizzlies. When dadddy deep pockets has his landscapping munched, and wolves are killing calves in his front yard, he will then get to reap what he sowed.

I have a message to all tye leftist groups. An overpayed retired elk hunter will soon be fighting back. Keep those lawyers close, cause your gonna need them

107 years of feeding elk, but a San Francisco think tank knows what's best. Laughable. They only sue the govt when they know the judge is in their pocket and they can win. Then, thru a law established in the 1980s, they can make the govt pay their legal fees. Never intended to be abused like this, Earth Justice and their slime bag lawyers found a loophole. Call your representatives today and tell them you demand reform to the Equal Access to Justice Act. Some cases the have won got billed out at 600 dollars an hour for attorney fees. Put an end to their nonsense once and for all by crippling their Cash cow!

So Wyoming is been doing this for a long time. This organization should do their homework. Just saying