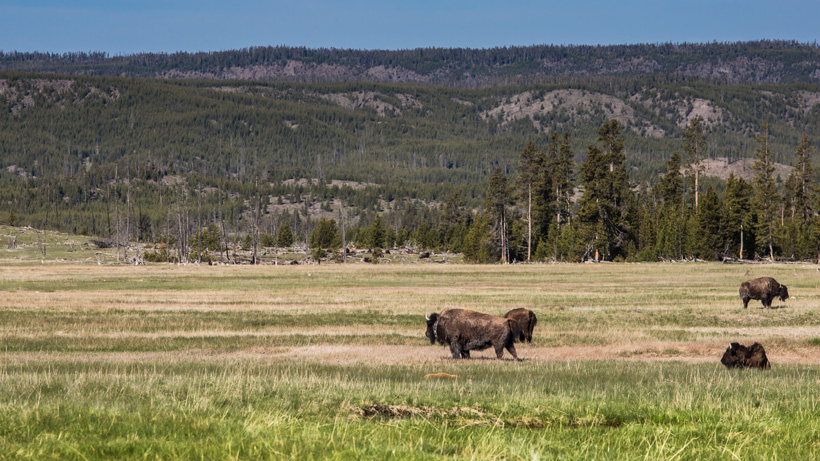 There are too many bison in the Grand Canyon. Two years ago, a herd reduction plan was approved; however, little action has been taken to reduce the population due to “weather and disagreements over how to kill some bison” if relocating the excess animals “isn’t enough,” the Washington Post reports. Park officials tried to round up animals last year only to be deterred due to severe winter weather, which caused bison to move “farther north on a plateau.”

The September 2017 plan included “corralling the animals near the highway that leads to the Grand Canyon’s North Rim” and using sharpshooters to cull other members of the herd; however, there’s been no progress on actual guidelines for lethally removing the excess animals. Officials also previously tried fencing off watering holes on the North Rim, hoping to force bison into the national forest where it is legal to hunt them, but that didn’t work. While Arizona holds an annual draw for bison tags in the Kaibab National Forest, out of the 25 hunters lucky to draw a tag, only two were successful. That poor success rate has resulted in a change that will give hunters more time to hunt during the spring hunts in 2020 and 2021.

But that doesn’t solve the immediate problem. And, if park officials don’t do something, the burgeoning herd could increase to as many as 1,500 animals, which would severely damage “the landscape and water resources,” according to the Washington Post, hence the push this month.

This month, Grand Canyon officials are giving it another try. The current plan is to corral a good portion of the bison at the North Rim and then sort the captured animals before giving them to Native American tribes that request them through the Intertribal Buffalo Council. According to Jan Balsom, a senior adviser at the park, “none of the animals can be slaughtered within the first year.”

“The goal is to reduce the bison herd to 200 within five years,” said Balsom.

However, the current plan isn’t supported by all state agencies. Last year, the Arizona Game and Fish Department was ordered by the state wildlife commission to stop talking with the Park Service “because it prefers hunters do the work and keep their prey,” according to regional Game and Fish Supervisor Scott Poppenberger.

Other states have suggested similar stances regarding excess bison and hunting.

“That would be a substantial game-changer in moving the ball forward,” said Poppenberger, referencing the push in Montana for bison hunting in Yellowstone National Park, which would help keep brucellosis in check.

Yet, to date, park officials are not supportive of bison hunting and, according to the Washington Post, that idea “has gone nowhere.

Were to start out of 250 tags there weren't only 2 taken don't know where that number came from I hunted buffalo on the kaibab in 2018 and there were 12 tags in my hunt and 11 people killed that was only 1 hunt out of 5 different hunts in 2019 I know of at least 4 people that have killed this year so those facts are wrong. There not hurting the park anyway why remove them there an American icon that was almost wiped out send them to Yellowstone

Very simple hunt them in the park problem solved.

I agree hunters will to this effectively and are willing to buy licenses. Open it up.

Increase the tags , allow the hunt. End the bickering !!!