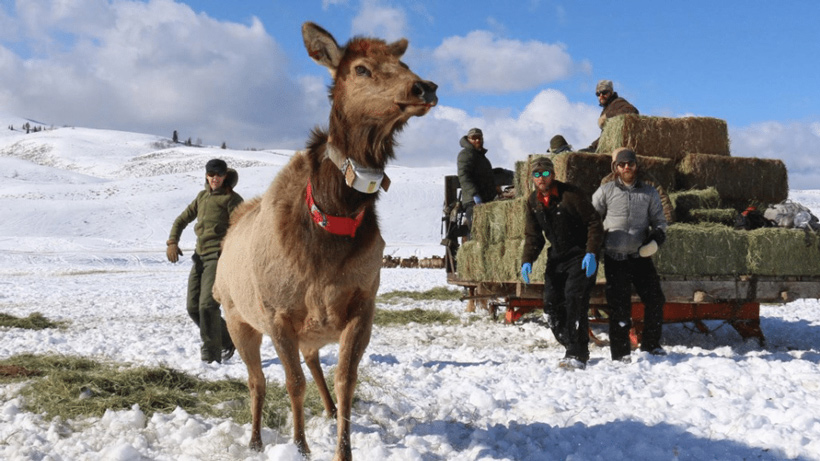 What’s causing Wyoming elk to ignore their historic winter range in the Gros Ventre drainage? Over the past five years, hunters and wildlife officials have noticed a major drop in the number of elk that traditionally migrate to the area. While the Jackson elk herd population hasn’t really fluctuated much in numbers, the latest tally shows that “elk have simply left the drainage. Almost completely,” Buckrail reports.

Wyoming Game and Fish Department (WGFD) officials believe that elk have naturally selected a new winter range, possibly due to the number of wolves that inhabit the Gros Ventre Wilderness. According to Buckrail, WGFD has been keeping tabs on 62 cow elk outfitted with GPS collars. Most of this particular group has migrated to the National Elk Refuge while others have continued onto to wintering areas in the Upper Green, Hoback Canyon and near Dubois.

WGFD believes that increased wolf pressure may be behind this change.

In February, WGFD completed the annual aerial survey, counting only 86 elk in the Gros Ventre; however, data obtained via tracking collars suggest that some elk are returning to the area – just not very many. WGFD will continue to closely monitor elk, using remote cameras, increasing weekly flights and outfitting additional elk with GPS collars, the Buckrail reports. A possible increase in wolf hunting quotas for the Gros Ventre area is also on the table.

More fake news for our consumption! Elk have been wintering on the Gro Ventre for thounds of years. And now, in the last few years the pattern has changed overnight. If you can’t connect the dots between wolves and declining elk numbers, then you can’t see the trees through the forest. Dennis Wilson

Amazing how smart elk are.