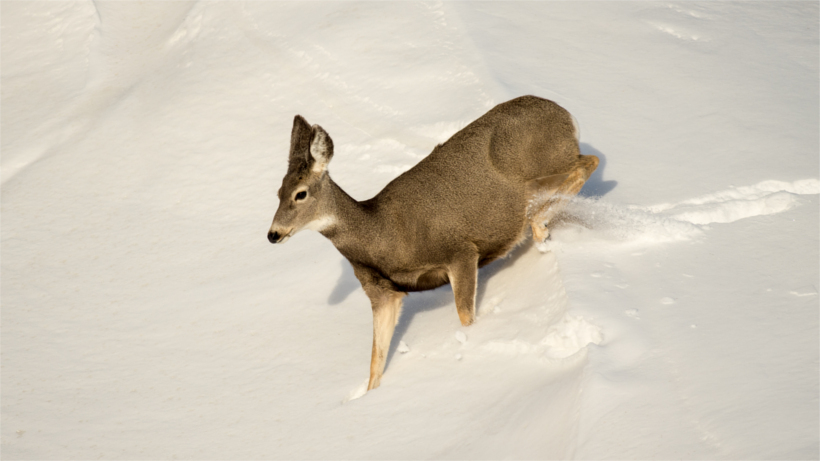 Due to massive fires that have burned 128,800 acres of mule deer habitat, the Nevada Board of Wildlife Commissioners has approved an emergency mule deer doe hunt in Area 6. The antlerless mule deer hunt will hopefully curtail massive deer malnutrition and starvation over the winter due to the expanse of range ruined by the fires. It may also help maintain winter browsing on the remaining unburned landscape.

“The Hot Pot Fire consumed the most important winter range for Area 6 mule deer, the Izzenhood Range, specifically the Izzenhood Basin. It is never good to refer to something as worst case scenario, but this is really close, “ says Matt Jeffress, game biologist for the Nevada Department of Wildlife (NDOW). “Izzenhood Basin represented the last large block of intact Wyoming sagebrush in the Izzenhoods. This winter is going to be very tough on this segment of the Area 6 deer herd.”

Between December and April, NDOW estimates that 3,000 to 4,000 deer migrate through the Izzenhood winter range (Hunt Unit 067). Approving the emergency doe hunt should help sustain remaining herd members through the winter despite less habitat.

“The goal of this emergency hunt is to reduce the density of deer that use the Izzenhoods for crucial winter range before the onset of winter,” says Cody Schroeder, NDOW mule deer biologist. “Since a large portion of this winter range burned, it will no longer support as many deer as it has in years past. If we have a severe winter this upcoming year, we may see a large scale die-off of mule deer on this winter range even with reduced densities resulting from this hunt.”

NDOW will hold two separate antlerless mule deer hunts for residents only. 500 tags will be available to those who have not previously received deer tags this year. The hunts will run Nov. 21 to Dec. 4 and Dec. 5 to 18. Tags will be issued through the online application hunt system. The application period opens today and closes Oct. 20. Tags will be announced on Nov. 11.

“We typically target adult females when trying to reduce the density of animals on crucial winter range which may have limited carrying capacity,” says Schroeder. “In terms of population dynamics, females (more specifically their reproductive success) are usually the driving factor in determining how many animals the habitat will have at any one time.”