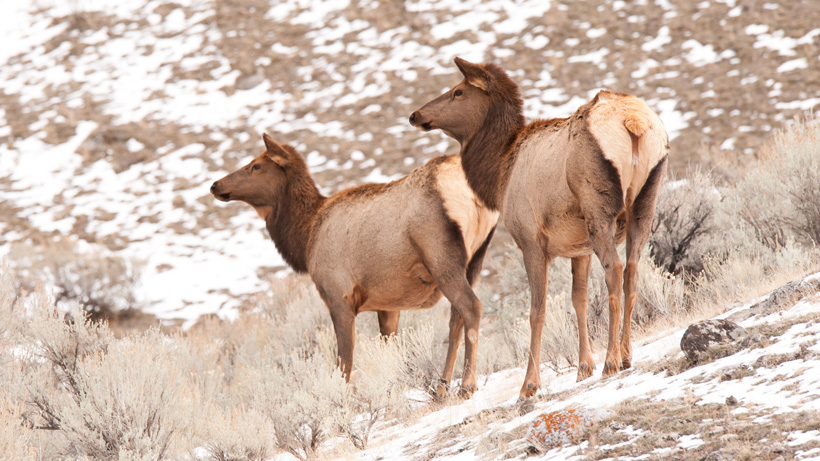 Here’s some good news: elk populations are up – and over objective – in the Missouri River Breaks in Montana. Montana Fish, Wildlife and Parks (Montana FWP) are reporting solid numbers after completing surveys last month in Hunting Districts (HD) 621, 622, 631 and 632 – districts located north of the river, the Billings Gazette reports.

The surveys are completed during alternating years with bighorn sheep surveys. To ensure survey quality, officials complete all hunting district surveys during “similar time periods to minimize any issues with elk movements between the hunting districts” and “both area biologists began simultaneously at the boundary between HD 622 and 631, Timber Creek, and continued their surveys west and east,” according to the Billings Gazette.

“In total, 1,991 elk were observed during this survey, which is a minimum count for elk within these districts,” said biologist Brett Dorak. “Elk numbers observed this year in 621 and 622 are 20% above the 2018 survey, and 20% above the maximum objective level of 1,650 that was set out in the 2005 Montana Final Elk Management Plan.”

“With 405 elk observed, we are still slightly above the objective of 300-350 elk that is identified in the 2005 Montana Final Elk Management Plan,” said biologist Drew Henry. “However, there has been a consistent downward trend in harvest in these districts, which is likely due to seasonal distribution shifts.”

Montana FWP recommended fewer cow licenses for HD 631 and 632 over the last few years and, for the 2020 and 2021 seasons, there will be no 699-00 antlerless elk shoulder season licenses or 698-00 antlerless elk permits in these two units, according to the Billings Gazette.

“We heard from many hunters that elk were tough to find during the rifle season in these districts,” said Henry. “We made these adjustments after the feedback we heard during the season-setting process, and we look forward to seeing how this affects elk distribution and hunter success.”

There were a few other changes based upon the survey data that include the following, per the Billings Gazette:

Know this, they have probably already thought of it...

Sounds like they need to introduce some wolves over there and get that calf count down to something acceptable like maybe 4 or 5 per hundred cows .