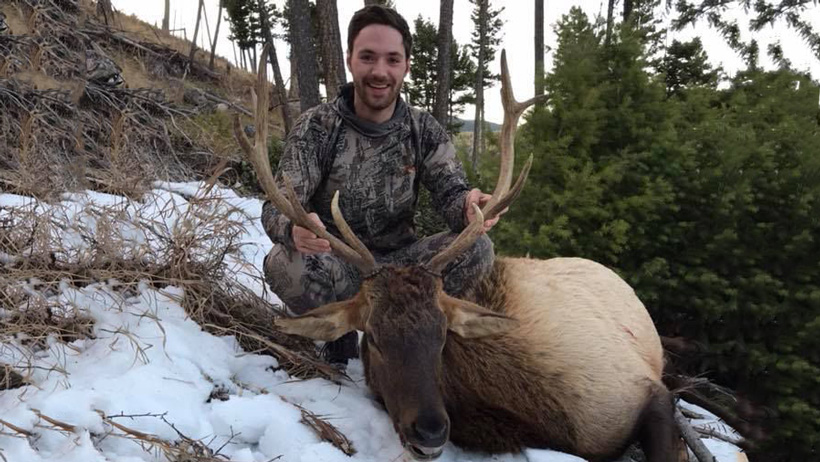 After spending countless hours in the backcountry, Ethan Donaldson finally harvested his first bull elk on the last day of Montana’s elk season – a fete that even his father had never accomplished. After celebrating in the field, Donaldson dropped off the elk meat at a processor on the way home and parked his truck at his North Reserve apartment complex in Missoula, Montana. He left the head of the 5-point bull, which he wanted to show his father, in the back of the truck overnight.

The next morning, he realized it had been stolen.

“All I could say was ‘Are you kidding me?’ ” Donaldson told The Missoulian.

Unfortunately, when he contacted Montana Fish, Wildlife and Parks, the warden told him that his case was one of a dozen and “finding it would just be a random chance of picking the right house to search,” says Donaldson, who also filed a report with the Missoula Police Department.  The police have opened an investigation.

While he realizes the odds aren’t in his favor, his Facebook post on the robbery has already received hundreds of shares and responses, The Missoulian reports, and Donaldson is hopeful that someone will come forward with information.

“It’s just a sad thing that this happens in the state of Montana. Everybody values the wildlife they take, and I just wish people would understand what it’s like to be a hunter and what it’s like to kill something that you really admire and that you work so hard for,”  Donaldson told NBC-Montana. “We leave our family for three months out of the year to go elk hunt, and all the elk hunters out there know how hard it is to kill an elk, and finally I killed mine and I’ll never be able to touch it again.”

The Montana Chapter of the Backcountry Hunters and Anglers has offered a $1,000 reward to anyone with information that leads to the recovery of Donaldson’s elk head.

“The thing that I really don’t like thinking about is that I’ll only be able to look at this thing in my head, but somebody will buy it for a hundred bucks to sell at an auction as a chandelier or something like that, and it’s just it’s a horrible thing that happened,” says Donaldson.