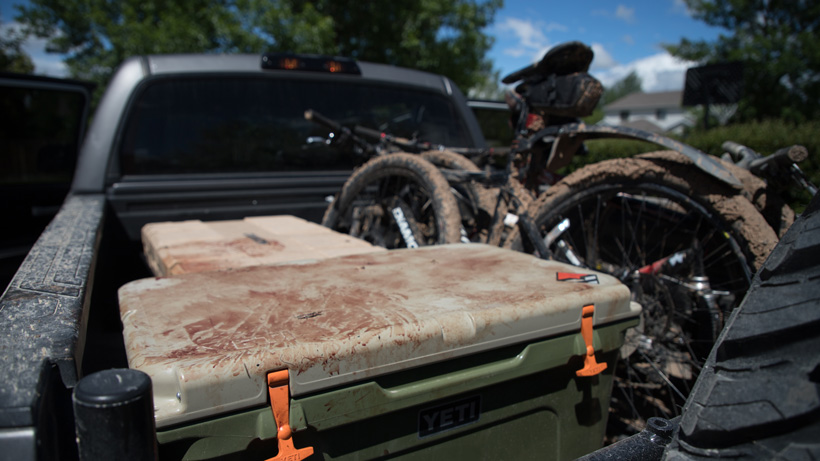 After several recent events that brought outdoor mountain bikers too close to nature for their own good, some have come forward to warn about the dangers of biking in the great outdoors. Dr. Christopher Servheen is one of those people. Servheen, who served on a committee that investigated a mountain biker death after the man collided with a grizzly bear near Glacier National Park, is a retired coordinator for the grizzly bear recovery program of the U.S. Fish and Wildlife Service. He recently spoken out against “recreational sports in the areas where grizzlies live,” the New York Times reports.

“We tell people not to run in grizzly bear habitat, to make noise and to be aware of their surroundings,” said Servheen. “Agencies are permitting the very activities we are telling people not to do.”

For example, this past summer, Servheen attempted to stop two ultramarathons in the Flathead National Forest because of the times at which both were scheduled. The one held last weekend occurred during “a time when bears are particularly active in foraging for food” in preparation for hibernation, according to the New York Times. But those actively engaging in mountain biking and other outdoor recreation interested in exploring backcountry for their sport seem to be unaware of the dangers or encroachment that this activity has on the wildlife that live in these remote areas. And the increased interest in exploring the public land in the West by bike or hike is resulting in increased conflicts between wildlife and humans—and, particularly, with grizzly bears that may feel threatened or scared.

“Bears respond to surprises usually by fleeing, but sometimes by attacking whatever it is that is surprising them,” said Dr. Stephen Herrero, a professor emeritus of ecology at the University of Calgary and author of Bear Attacks: Their Causes and Avoidance. “Events like runners and bike riders and anything else that suddenly thrusts a disturbance or surprise into their environment, they sometimes respond by attacking.”

“I try to avoid mountain biking in any area that is grizzly bear habitat,” Herrero continued. “There are plenty of areas that aren’t.”

And, while the current focus is on how mountain biking may disturb grizzly bears, according to the New York Times, other experts think that the activity may also impact elk, deer and other animals and “disrupt their lives.” In fact, studies have been conducted that show outdoor recreation—not just mountain biking—can have dire consequences on wildlife.

“Overall we found a moderate to strong effect of recreation on wildlife across the board,” said Courtney Larson, who published a literature review of 274 studies in 2016 for her Ph.D. at Colorado State University and has just completed a meta-analysis on the effects of recreation.

“It’s a little difficult to tease out on its own because most of the time, mountain bikes use occurs on multiple-use trails with hiking, mountain biking, dogs and horseback riders on the same trails,” said Larson.

According to the New York Times, a 2018 study discovered that elk move when people do—and they tend to move more from bikers than hikers. In fact, in recent studies, researchers found that “when a mountain bike appeared, elk fled 1,500 meters” and fled even further—2,000 meters—when trying to flee from an all-terrain vehicle. This need to relocate as soon as people start to pressure them can disrupt feeding habits and create long-term problems for the entire herd.

“If a female doesn’t put on enough body fat, she might not be able to conceive the next year,” said Michael Wisdom, a researcher with the Pacific Northwest Research Station, part of the Forest Service, and an author of the study. “An increase in time running reduces time foraging.”

However, even with these studies and information, will it prevent people from taking to the woods for outdoor recreation? Nope. This means other solutions need to be identified to keep wildlife safe from unnecessary disturbances and people safe from dangerous encounters. These solutions include “better management of trails used by mountain bikes, as well as restricting use on some trails, lowering any speed limits and permitting bike riders only on dirt roads,” according to the New York Times.

“Careful planning of the trail corridor and the design” is also a good idea, said David Wiens, executive director of the International Mountain Bicycling Association in Gunnison, Colo. “That’s where the agencies get involved and the wildlife specialists, who can come up with the proper location of the trail based on their expertise. In certain cases, there are seasonal closures for wildlife.”

The Sammi are also white Europeans. Just a ethnically diverse group from those in the other two groups of people (Finns and Norwegians/Swedes) in the rest of Scandinavia.

I have a German Jagdschein (hunting license). Most of the population of brown bears in central Europe is in Switzerland or Sud Tyrol (Northern Italy). Croatia, Romania and Bulgaria have a ton of bears as does Scandavia and there are some in Spain.

The idea that predatory species are not tolerated is not quite right. I know of a pechter (the actual term for wildlife manager is not jagermeister as many believe) in Finland that killed himself after it was found out he killed a wolf. The non-hunting public is nuts over wolves, and welcomes them back from Eastern Europe into Western Europe just as much as the non-hunting public in America thinks it is a good idea to have wolves everywhere in the Western USA.

Hey Seth, I did some digging because your response left the impression that the situation in Europe is more uniform than it is, and less contentious than that in the USA. So, for the USA readers, here are some facts.

Germany: There are no black bears at all. Some few years ago a single brown bear, the first in 150 years, wandered into Germany. It tore up bee hives and some livestock. Attempts to run it out were futile so a “hunting season” was opened, and the bear got hunted. It’s still in Germany, in a museum. The news media named it Bruno. You mentioned bears in the Alps in a sentence referring to Eastern Germany. That’s a bit confusing. There are no bears in the German Alps, perhaps a few in Switzerland.

There are wolves and lots of predation. There is a lot of pressure to delist them and allow hunting, just like here. My friend said some words in German that are well understood here; translated, it is “Shoot, shovel and shut up”. German farmers and hunters don’t care much for wolves. Wildlife in general are very tightly controlled in Germany. For example, red deer are not tolerated outside of certain areas. If they wander, they are killed.

Romania: Lots of bears, and lots of problems. Couple of years ago animal rights activists convinced the populace to outlaw brown bear hunting. Now there is a lot of pressure to legalize it because when the bears that are not afraid of people are not hunted, they thrive, and people suffer.

In all of Scandinavia there are large populations of brown bears and wolves (with one exception). Bears are hunted heavily in Scandinavia, with dogs. It’s a very popular hunt and any bear incautious enough to be curious about, or bother with humans, is quickly dispatched by hunters. They use the same dogs that are used to run down and hunt moose. Now that’s a big difference from North America. Wolves also are hunted heavily and avoid people as a result. The one exception to large wolf populations is where Sami people roam with their reindeer. The Sami exterminate wolves whenever and wherever they find them. As Indigenous People, they can do as they please. Big smirk on my face as I observe that the Sami are living in harmony with nature whereas white folks exterminating creatures to protect crops and stock are murderous depredators.

So there is a bit of the situation in Europe, which is not one place any more than the USA is one ecosystem. Where predators are allowed to predate at will, there are problems, where they are not, there is coexistence. In some places the predators were removed long ago and have not returned. The more you know about it the more it sounds just like the USA.

Rather than tell hikers to stay off the trails we should hunt bears and wolves. Those that habituate the trails and areas of human use will quickly expire. Those that don’t will prosper.

Actually there are states that limit all recreation in elk calving areas.

Here's my question... If there's seasons for activities such as shed hunting in some states to limit disturbance of wildlife why can't there be seasons for other outdoor recreation such as mountain biking in this case? Hunters manage their time spent in the wood for the good of the wildlife why cant all other outdoor enthusiast do the same? Is this a question of selfness or something else? Just one fella's opinion though.

We have wolves in Eastern Germany, and bears in the Alps, Spain has both. Sweden, Norway and Finland all have both bears and wolves, and wolverine.

Bears and wolves in Western Europe have the full protection of the endangered species act and are not a game animal.

Almost every nation in Europe has wildboar.

It is also important to remember that most European union nations have population saturation that greatly exceeds that of any state. Germany has 83,000,000 people and is the size of Montana.

Seth, I have a friend who is a hunter in Germany and has hunted all over Europe. I vetted your comment with him and he agreed, where there is public land there is multiple use. And in Sweden, for example, the law Allemansratten, allows one to cross, collect certain flora and pitch a tent on private land. However, he also told me that dangerous predators are extirpated or managed so aggressively as to preclude human interaction. You are comparing apples to oranges in your comment on this article, this problem and the situation in the USA.

By the way, thank you very much for your suggestions on lotteries in the Wyoming article.

I have spent almost 7 years of my life living and hunting in Europe. All Europeans have the ability to hike, ride their bikes and ride horses on public and private lands. Some nations even allow people to camp for 48 hours on private lands.

Multiple use management is what the future holds. We don't have the vote to control the wild, it is important that everyone understands that.

i do not want go hunt right now . thank you larry