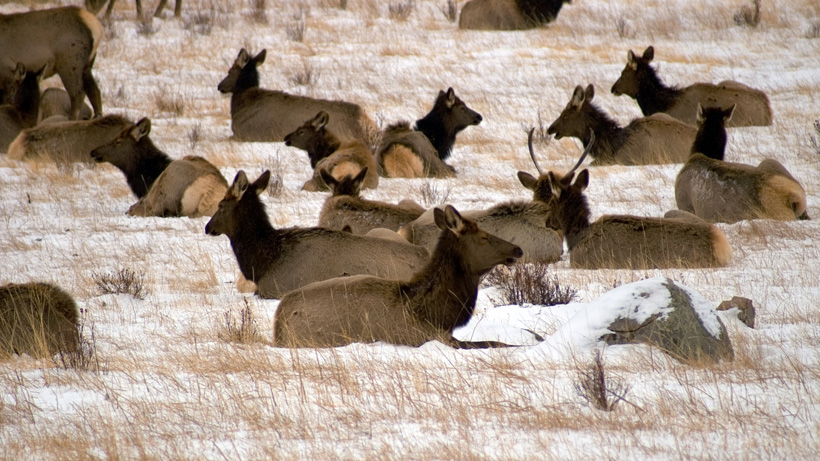 The first case of chronic wasting disease (CWD) was confirmed in a cow elk last week after a hunter harvested the animal on Dec. 2 in Grand Teton National Park. It took two weeks to receive the lab results, but the lymph node extracted from the elk tested positive for the fatal disease, resulting in concern from wildlife disease experts since the elk was killed only a few miles away from the National Elk Refuge, according to the Jackson Hole Daily.

“This is not going to be good, that’s my gut feeling,” said Wildlife Disease Supervisor Hank Edwards. “How bad it’s going to be? I don’t know.”

The controversial feedgrounds provide supplemental alfalfa pellets for elk during severe winters and, according to Jackson Hole Daily, roughly 20,000 animals congregate each year on 23 state and federal feedgrounds in Wyoming. However, the Wyoming Game and Fish Department (WGFD) doesn’t plan on halting the supplemental feeding program despite the presence of CWD. Prior to this recent positive case, the only CWD-positive elk was harvested in Hunt Unit 66 – though the disease has previously been found in mule deer and moose.

“We’ve been speculating when it would arrive for a long time,” WGFD Regional Supervisor Brad Hovinga said. “It’s extremely difficult to predict.”

And it’s also difficult to predict how fast the disease will infiltrate elk populations within Jackson Hole and the rest of the southern Greater Yellowstone Ecosystem, despite modeling completed by wildlife scientists. Some peer-reviewed research says CWD prevalence “could reach 10% within five years” and predictions are worse for other areas in the Rocky Mountain National Park where scientists predict “populations [of elk] decline once prevalence tops 13%,” according to the Jackson Hole Daily.

Based upon this information, critics don’t want the supplemental feeding programs to continue.

“We know what’s going to happen,” said Connie Wilbert, the Sierra Club’s Wyoming Chapter director.. “The idea that they’re going to be feeding this coming winter is crazy and totally insane. If this isn’t a wake-up call, I don’t know what is.”

The Wyoming Outfitters and Guides Association (WOGA) has similar views.

“It would be a fool’s errand to think that it’s not going to go through all the big game units in Wyoming, eventually,” said Sy Gilliland of WOGA. “Anybody who’s dealt with it knows that.”

To address the issue, WGFD has updated its CWD management plan and is currently collected comments on how to best manage this particular issue.