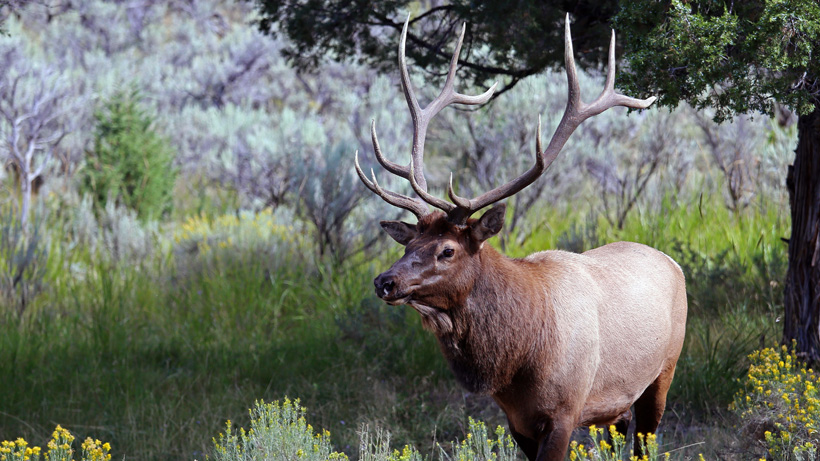 If you were successful during New Mexico’s big game drawing in the last five years, your contact information will be released to James Whitehead and Aubrey Dunn. This week, a First Judicial District Court judge ordered the New Mexico Department of Game and Fish (NMDGF) to provide “the names and addresses of all successful big game applicants for the years 2015 through April 23, 2019” to Whitehead, according to the agency. Further, email addresses for anyone who applied for state hunting licenses between 2015 and 2016 will be provided to former Land Commissioner Dunn per the New Mexico Court of Appeals.

According to NMDGF, Dunn asked for names and email addresses of more than 300,000 applicants for the state’s hunting licenses while Whitehead asked for “detailed draw results, names and addresses of all successful applicants, units applied for and units drawn.” While the agency initially gave names to both Dunn and Whitehead in 2017, NMDGF said that they do “not give out addresses of license buyers pursuant to the Cox Rule,” according to the Los Alamos Reporter. Whitehead responded with, “How do we as citizens verify that Game and Fish are conducting the draw fairly?” and filed the lawsuit, which made its way to the First Judicial District Court. 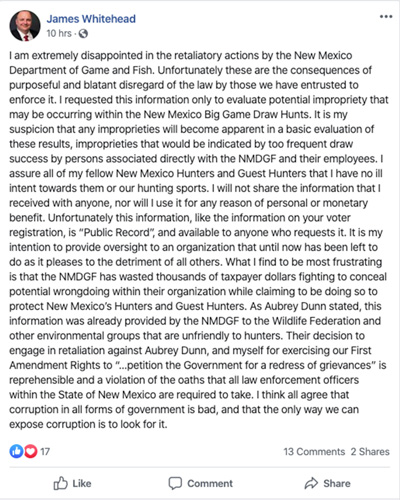 The requests have to be honored because the information is considered public domain. Both requests were filed using the state Inspection of Public Records Act (IPRA), which requires the disclosure of public records, according to the courts.

“The Department argued against the release, but ultimately lost,” said Director Michael Sloane. “We value the privacy of our customers’ personal information but recognize that is the courts' interpretation of the current IPRA law.”

The information was released yesterday, March 19. If you feel you are being harassed because of the release of this information, you can file a complaint here or call 1-844-255-9210.

"I will not share the information I received with anyone......." well then, what's the point? "improprieties that would be indicated by too frequent draw success"....what exactly would constitute too frequent draw success? I'm not familiar with this guy - is anyone else? Is he positioning this to the benefit of a broader sportsman's or conservation group?

For those who say your draw apps info is public info, please go ahead and post your full name, home address, email address, cell phone, and the last five years of your draw application for all states you've applied in, species and specific units you've applied for right here on GoHunt. Bet there won't be any takers on that offer.

I'm not an outfitter and actually irritated myself with the muscle some outfitters exercise in some states. But those saying a list of 300,000 names, emails, addresses, and five years of hunt draw information is public information are incorrect. In the business world this type of information is called a proprietary list of customers that is one of, if not the most, coveted pieces of information a business has. Most courts view this compilation of information as a trade secret. From a privacy perspective, states and the federal government do in fact consider customer information transmitted in a commercial transaction as private information. The information disclosed to James Whitehead is regularly sold over the dark web to hackers, spammers, identity theives, and unethical marketers. Forgive me for not believing hook line and sinker in the motives of a white knight that ripped off our personal information with the help of one judge with no appellate review.

I think this is great! You wonder how many Western States have any checks-n-balances to make sure things are legit?? With all the outfitters out there paying tons of money to ranchers and their ridiculous fees they can charge – you have to wonder how much is legit and how much is under the table.

Really? This is an issue? All of our info is everywhere already anyway. The fact that the NWF has the info should "outrage" people, but regardless, it's public all info anyway unfortunately.

Wow...bad on me for not knowing that my name, address and email were public record on a state run application. I would have thought they they could have completed their investigation of wrongdoing with just the names of applicants vs those who drew tags?
Also, I saw no mention of them getting SSN's and CC information.

I would recommend that an Outside agency - that can be held liable - review the records for ill intent within the NM draw verses two individuals like Whitehead & Dunn. I consider it healthy for a "check the checker" to have the ability to review and ensure fair and transparent processes. Our government was established with checks and balances in mind. By NO means should they get our SSN, DOB, and CC info, however addresses, names, phone numbers, etc. are fair game...this info is public knowledge. The 6% draw rate of outfitters is something that should be checked given the small numbers, but with huge potential gain for some...monopolies are illegal (especially with insider trading). Additionally, I don't have a dog in the fight, save for this year's draw. I haven't been close enough nor free to hunt. I am a New Mexico resident & active duty military (30+ years).

Clifford J., to be clear, I'm not saying Whitehead got SSN, DOB, or credit card information. He did get draw information, names, address, phone #s, and emails. There are federal privacy laws enforced by the FTC. I urge all to report the disclosure of their private information to the FTC.

I'm wondering if (A) there's some corruption going on between NM G&F and the Outfitters there etc. (B) I'm also curious why Mr. Whitehead needs SSN's etc., credit card data to vet individuals for corruption suspicions.

@ Jay K., his post is the classic misdirection of casting himself as the white knight who's been victimized.

So is the NF&W managing public animals or public humans? I thought there was a difference. Animals don't have email/phones/addresses. Anyone that disagrees, post your full name, DOB, SSN, credit card info, email, phone, addresses, and NM draw application information and results when you reply. Thx

These are public animals. The agencies that manage these animals do not own them. It is the public's right to know if they are following the agencies published drawing practices.

Personally, I don’t believe a word that Mr. Whitehead wrote in his post.

@Arron J. According to his facebook page, he applied in the draw as well, so I guess we could get his address from there!

I would like to know James Whitehead's, Aubrey Dunn's, and the district court and appellate judges' home addresses, personal phone numbers, and emails. If anyone can look that up in New Mexico, I encourage you to share here on GoHunt and other social media outlets.

They are probably trying to locate dead beat dads and people who owe child support to collect the money. Also verifying that people who are applying are legal citizens of the state.....

As long as they are not selling my information I am cool with it.

I bet you people are going to shit when they see the results of how many people are drawing tags and where they are from and who they are connected to.