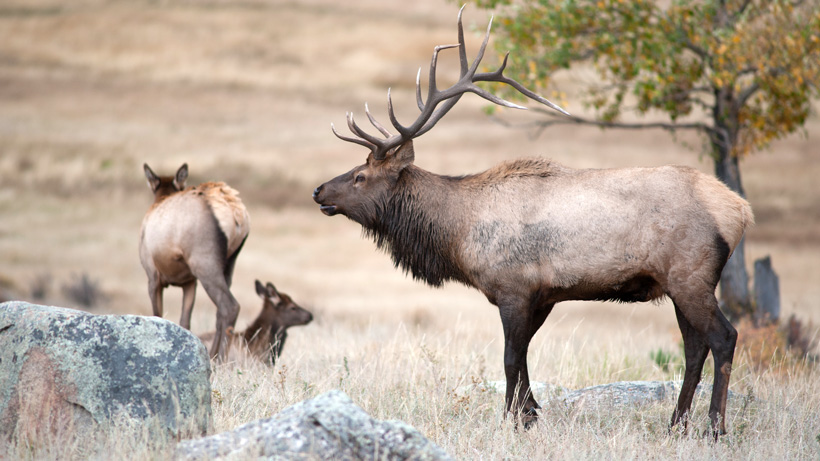 Cow elk are in the process of being collared in Colorado as part of a statewide project geared toward determining how much outdoor recreation affects herd health. The study, which is a collaboration between Colorado Parks and Wildlife (CPW), the University of Wyoming and the U.S. Forest Service, will target resident elk in Routt County. Researchers used helicopters to net cow elk between Catamount Lake to Mad Creek this week, the Steamboat Pilot & Today reports.

Once captured, elk are lowered to the ground where GPS collars are placed on the animals, blood samples are collected to determine pregnancy and each animal has its weight, age and general health assessed before it is released back into the wild. Kyle Bond, a local district wildlife manager with CPW, said that they “hope to collect data on about 30 female elk in the area” for the study.

Across the state, elk herds have dwindled where outdoor recreation has increased, particularly around the Vail and Aspen areas, according to the Steamboat Pilot & Today. However, the outdoor industry “generates $28 billion in consumer spending” each year, pitting wildlife recovery and herd health against the state economy. And, as goHUNT has previously reported, while habitat encroachment, fossil fuel development and predators are often to blame for a dip in wildlife population, this time it appears to be mountain bikers, hikers, backcountry skiers, ATV and Jeep enthusiasts and motorcycle riders.

To help herds that may be affected by this influx of outdoor recreationists, the Forest Service has approved seasonal closures on Routt National Forest. According to the Steamboat Pilot & Today, mandatory closures include the Spring Creek, Mad Creek, Red Dirt and Hot Springs trails, foothills south of Steamboat Resort to U.S. Highway 40; voluntary closures include several areas in Routt County like Sarvis Creek and Silver Creek trails south of Steamboat.