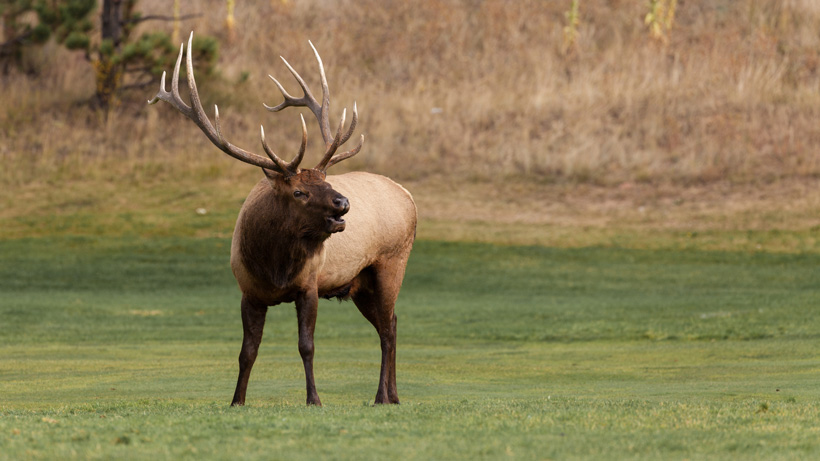 Last Saturday, a Colorado golfer was gored by a bull elk after the animal charged the golf cart on the Evergreen Golf Course. Zak Bornhoft, who is currently in the intensive care unit at St. Anthony Hospital, is recovering from where the antler “left a 5-inch gash in his side and split his kidney into two pieces,” CBS4 Denver reports.

Bornhoft’s wife, Megan, shared details of the incident with CBS4 Denver. She says that elk were roaming about the course, but the golfers managed to avoid any conflict until they neared the end of their game. At the 17th hole, a large bull elk advanced upon the golf cart.

“They kind of stopped because there was a herd of elk and one elk kind of came up and nudged the golf cart,” said Megan.

Bornhoft was sitting in the passenger seat and, despite trying to drive away from the animal, it charged.

“At that point, the horn went into the back of Zak’s right side, his right hip, and we found out that it then went through to his left kidney,” said Megan.

After the incident, the golf cart driver sped back to the clubhouse and an ambulance was called.

“The urologist told me 3 inches higher and we wouldn’t even be sitting here,” said Megan. “I’m just so thankful he’s here with us and this isn’t worse than it could have been.”

According to Colorado Parks and Wildlife public information officer Jason Clay, keeping as much distance as possible between elk – especially during the rut – is a good idea.

“During the rut, the bulls collect their harems and very aggressively will defend them, so it could definitely see a golf cart or people nearby as a challenger,” said Clay.