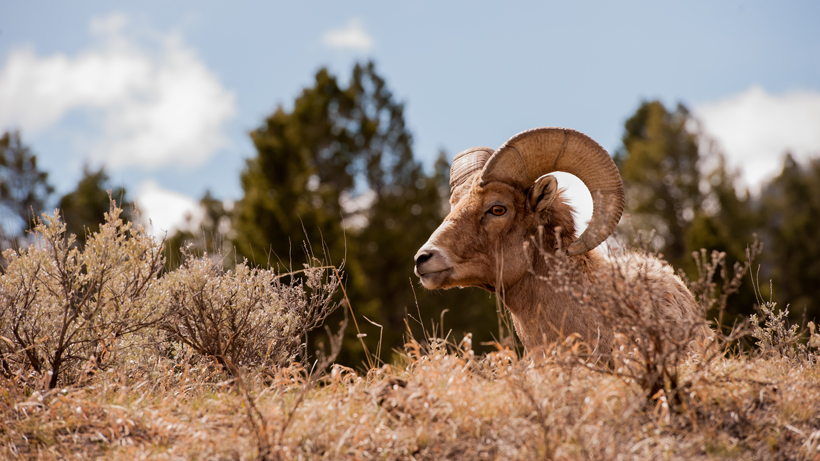 Bighorn sheep are back on Antelope Island in Utah! On Jan. 29, the Utah Division of Wildlife Resources (UDWR) successfully released 25 bighorn sheep in order to reestablish a healthy herd. While nearly 250 bighorn sheep once roamed the island, a respiratory disease caused a massive die-off among the herds in 2018 and, last January, UDWR officers were forced to euthanize the remaining members to “avoid chronic respiratory disease,” according to the agency.

The effort was a collaboration between UDWR, Utah State Parks, Utah Wild Sheep Foundation and other conservation groups, laboratories, Wildlife Services and KUIU, a western-based hunting gear company. KUIU and KUIU customers were responsible for purchasing the bighorn sheep, directing “all the logistics at Rocky Boy’s Reservation” in Montana where the sheep came from, and funding the “capture and relocation from Montana to Utah,” according to UDWR.

“This is a huge win for bighorn sheep in the West,” said Brendan Burns, KUIU's Chief Hunting Officer and Conservation Director. “This project shows the power of what's possible when the hunting community works together toward a common conservation goal to drive real results.”

Relocated bighorn sheep will be contained via a special wildlife fence constructed on the southern end of the island. This fence will keep the animals from leaving the island and stop other animals that may carry potential pathogens from mingling with the wild sheep. This precautionary measure will hopefully prevent future disease outbreaks. Regardless, the relocated sheep will be carefully monitored. Prior to being released, each sheep was outfitted with a GPS collar and UDWR biologists plan on performing “periodic health assessments” to keep tabs on general herd health.

“Antelope Island is thrilled to once again be a home for bighorn sheep,” Antelope Island State Park Manager Jeremy Shaw said. “We are excited that visitors will again have the opportunity to see these animals in the wild when they visit our park.”

Other relocation efforts are in the works with the hope that 125 bighorn sheep will eventually live on Antelope Island.

“Antelope Island has already proven itself as an invaluable resource for bighorn sheep in Utah, due to its ideal rugged habitat and relative isolation,” said UDWR Bighorn Sheep Biologist Jace Taylor. “Even though the previous Antelope Island bighorn herd was lost, there are currently more than 600 bighorns in Utah that are descended from the 29 bighorns brought to Antelope Island in 1997. We hope this new bighorn herd will be even more successful and help provide a bright future for bighorn sheep across all of Utah.”