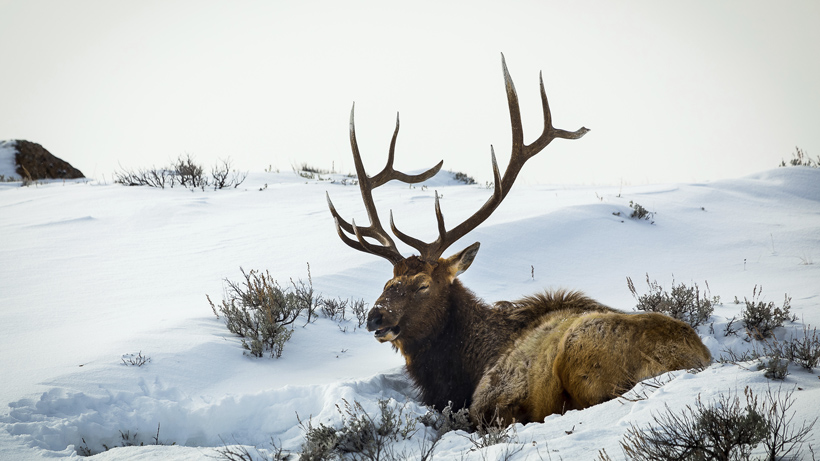 Biologists with the Idaho Department of Fish and Game (IDFG) began prepping for their annual helicopter elk surveys last week. Once the weather permits it, biologists will take to the air, tallying up the number of elk that stretch from the North Fork of the Coeur d’Alene River to the St. Joe River drainages in Idaho. This is the fourth consecutive year biologists have conducted this survey and, this year, it’s a bit different as they plan to collar calves in Units 4, 6, 7 and 9 to monitor calf and adult populations, The Coeur d’Alene/Post Falls Press reports.

When the study first began in 2014, the overall cow elk survival rate was a steady 94%; however, IDFG Regional Biologist Barb Moore said that “calf survival has been lower and more variable,” ranging between 40 to 80%. By collaring calves during the survey, they’ll be able to keep tabs on their movement and, if they survive, monitor their migration to summer and fall ranges.

It’s a slightly different method than IDFG has used in previous years. Before, game managers would have to search for elk during inclement weather, counting visually how many were in the specific units, according to The Coeur d’Alene/Post Falls Press. This way, biologists can stay on the ground and still keep an eye on the elk.

IDFG Biologist Kiira Siitari hopes that by tracking calf movement this way, they’ll be able to use the data for the future. So far, the team has collared 160 calves since 2014; 60 additional calves are set to be collared this winter, The Coeur d’Alene/Post Falls Press reports.

“We’re building a database of where elk hang out and where they move over time,” said Siitari.

The study helps biologists understand what affects calf mortality the most: predators like wolves, mountain lions, and bears or other factors like disease, parasites or low-fat stores.

“The long duration of snow in low elevations the last two winters caused some calves to burn entirely through their fat reserves, which also increased their vulnerability to predators,” said Moore.

I feel like IDFG does a pretty good job on my side of the state but we have some pretty great winter ranges that make counts easy. Funding and staffing is always an issue it seems. Also, up where they are counting, as you probably know, its pretty rugged timber country and hard to count.

If you don't agree with what they are doing you or have constructive input, can always volunteer and become part of the solution and process. It's your right (or privilege) as a citizen of this great state to know what's going on.

IDFG notoriously have no idea what Elk numbers in Idaho are. They know what they want the numbers to be..