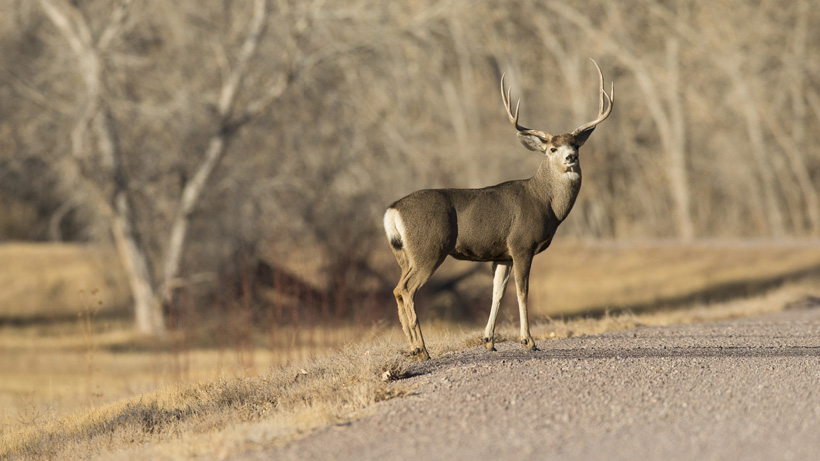 Over the past few years, there’s been a steady increase in wildlife-vehicle collisions in Wyoming, resulting in a collective decision among state departments, wildlife organizations and nonprofits to come up with a solution. Last April, during the Wildlife and Roadways Summit, conference attendees discussed ways to reduce collisions, increase motorist safety and keep wildlife migration routes easily assessable. The hang-up? Determining a funding source for these specific conservation projects.

Enter House Bill 39 (HB 39). HB 39 “would authorize the new [license] plates and direct the one-time $100 application fee to the Wildlife Conservation Account within the Highway Fund” – a fund that would be established through creation of the bill, the Rock Springs Rocket Miner reports. These special plates, which would directly fund conservation efforts, are a result of Muley Fanatic Foundation Director Joshua Coursey contacting Rep. Stan Blake (D-Green River). Blake is a member of the House Joint Transportation, Highways, and Military Affairs Committee; the Committee endorsed HB 39 on Friday. Now, it moves onto the Appropriation Committee.

As goHUNT has previously reported, Wyoming has worked to create safe wildlife migration routes over the past few years, partnering with various state departments and nonprofits to help with these efforts. Between 2013 and 2016, wildlife-vehicle collisions have increased 37%, according to the Rocket Miner. Not only have they considered a public safety hazard, but these collisions also greatly impact wildlife populations, particularly mule deer. In fact, according to the Rocket Miner, the Wyoming Department of Transportation says that “deer-vehicle collisions total approximately $24 million to $29 million per year in Wyoming in injury and damage costs” with “an additional $20 million to $23 million per year in wildlife costs.”

While Coursey doesn’t believe that the new license plate will be “the fix-all to this,” he is positive that it can help.