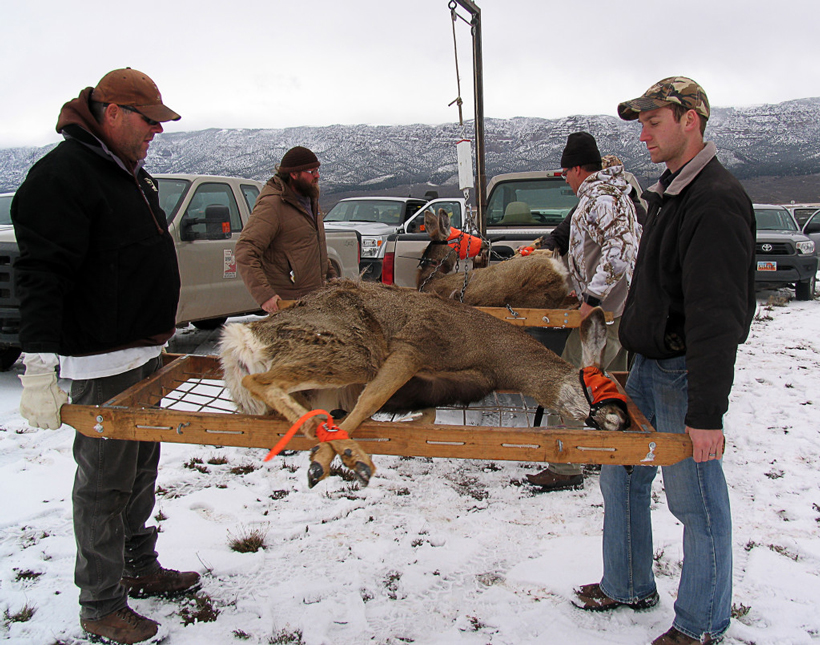 Mule deer populations in Utah have been steadily decreasing and researchers want to know why. For the past four years, a collaborative team comprised of biologists from Utah’s Division of Wildlife Resources, BYU and Utah State University students, and Helicopter Wildlife Services’ pilots has been studying the link between mule deer populations, predators and fawn survival.

The study is in its fourth and final year, and researchers are beginning to draw some conclusions. According to BYU Professor of Wildlife Ecology Brock McMillan, 55% of new fawns that they have studied have lived to be six months old. Of the 45% of fawns that have died, half of the deaths were caused by predators like coyotes and the other half died from a variety of health issues or abandonment. Previous studies have focused only on mortality rates in the adult population. This study is the first one to examine fawn survival and its relationship to herd population using a controlled and uncontrolled predatory environment to see the effect of predators on overall mortality.

“There are knowledge gaps in our understanding of fawn survival and fawn recruitment into the population,” says McMillan. “One of the leading ideas is that predators limit recruitment. We have a lot of fawns, all of the does are pregnant, but do they get eaten before they even make it to the age of recruitment?”

In order to gather the necessary information to draw appropriate conclusions, DWR biologist Vance Mumford said that it was “necessary to collaborate with as many entities as possible throughout the four-year study.” Researchers, students and helicopter pilots teamed up to work quickly and quietly to lessen the stress on the animals brought in to study. Predators like coyotes were examined to determine age, weight, body length, shoulder height, wear on teeth, and general health and were fitted with GPS collars before being released. Researchers implanted a GPS tracking device in the does’ birth canals in order to locate the new fawns easily; does were also outfitted with GPS collars and had their ears tagged, blood drawn, teeth checked, and were given ultrasounds to determine the health of the fetuses and the fat reserves left on the mothers.

According to McMillan, the end goal of the study focuses not only on finding out how mule deer populations are impacted by both fawn survival and predator control, but also figuring out a way to secure continued survival for the deer.