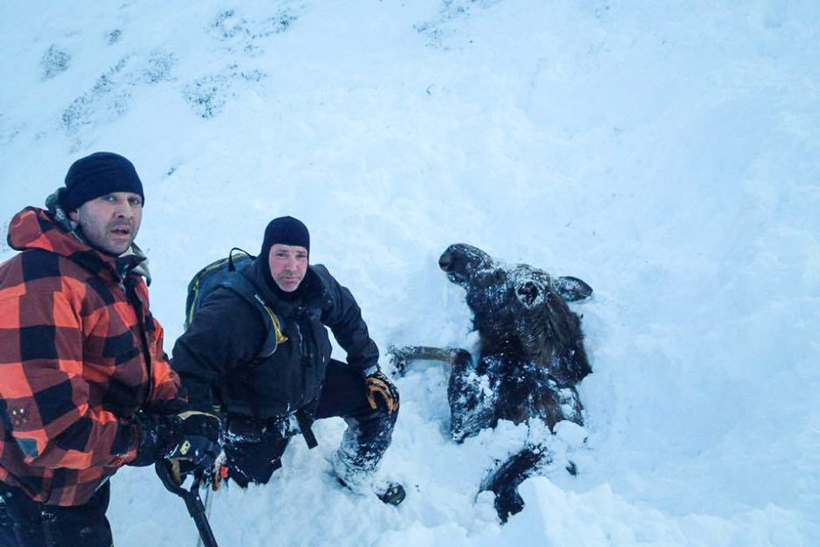 Thanks to three local snowmobilers, another moose is alive and freely roaming the Alaskan wilderness. Last week, three residents of the Matanuska-Susitna Borough near Anchorage, Alaska went riding, wary of avalanches often brought on by the warmer weather.

As the three men came upon a hillside, they noticed both ski tracks and moose tracks, noting that skiers do not often ski in the area. An hour later, they circled back and saw that both sets of tracks were now completely blanketed by heavy snow due to an avalanche. Concerned that a skier may be trapped, the three stopped to investigate, knowing more snow was on its way.

"We had about 2,500 feet of mountain above us still," says Marty Mobley. "Half slid, half didn't, so we didn't want to screw around a bunch there.”

As they approached the avalanche debris field, they could see something brown and moving above the hard-packed snow.

"It looked like a guy's arm at first because we were expecting to see a skier," says Mobley. "But it was moaning and groaning and moving and we realized it was a moose, even though only his ears and some of its snout was sticking out of the snow."

Grabbing shovels, two men began to dig the moose out of the snow while the other kept watch for another avalanche. The moose, obviously distressed, stayed calm as they cleared the snow away. After about ten minutes of digging, the men had uncovered about three-quarters of the moose and were unsure if it was injured. One of the men gently poked the moose’s backside with a shovel and it stood right up, towering over them before taking off “at full steam” down the mountain.

Mobley believes the moose caused the slide that swallowed it and, without the help of Mobley and his friends Rob Uphus and Avery Vucinich, the moose would not have survived.

"I am an animal lover, and I couldn’t leave it there," says Mobley. "Besides, we deal with a lot of avalanches and a lot of snow. That kind of karma is something we don’t pass up."