Will the winter kill of 2017 be one for the records? 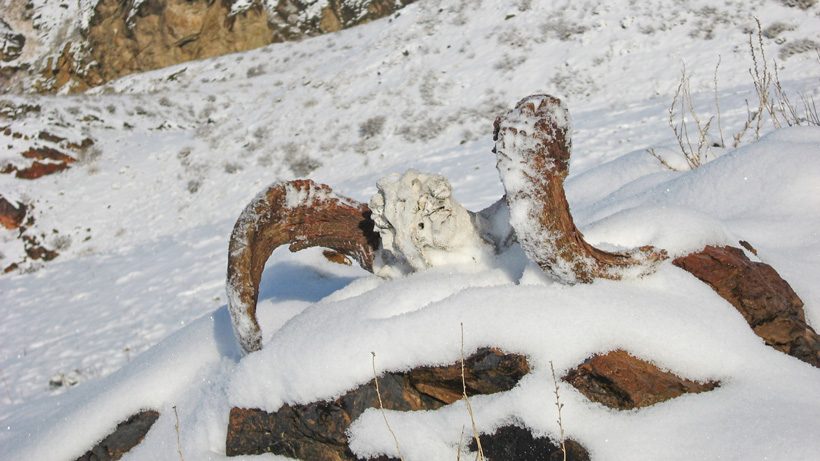 As the 2016/2017 winter continues, many sportsmen across the country are becoming increasingly concerned with the condition of the wildlife. Along with heavy snowfall across much of the West, many locations have also set record low temperatures with some places reaching -50℉. At this point, this winter has been more severe than previous years and the impact of this severe weather on animal populations is still unclear at this point. With us midway through March and spring right around the corner, that doesn’t mean we are in the clear.

With deadlines for many nonresident applications quickly approaching, hunters looking to cash in on their hard-earned preference or bonus points are playing a modified game of Russian roulette with their wallet and Mother Nature. In the following article, we take a look at current snowfall data for several locations around a state and discuss the outlook for the 2017 season. 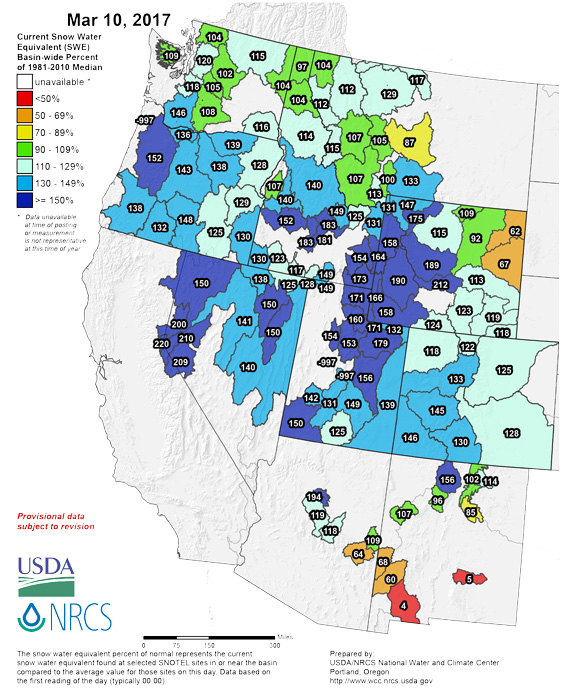 Below is an interesting view comparing snowpack images from Dec. 28, 2016 and Jan. 24, 2017 of western Nevada and California. 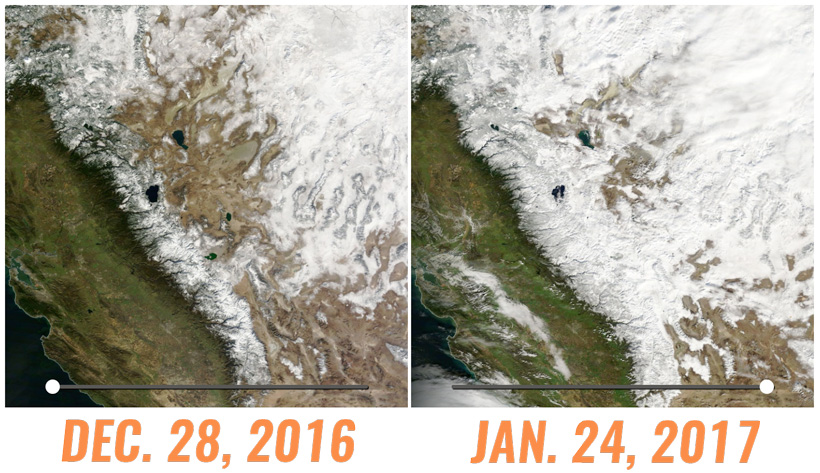 How does snowfall effect wildlife?

During periods of heavy snowfall, animal populations can be greatly affected due to many obvious and some not so obvious reasons. Heavy snowfall can quickly bury ground vegetation, which forces animals to transition to browsing on bark, twigs, and remaining leaves. For animals not adapted to browse feeding, the loss of caloric intake can lead to lower energy levels, which are paramount when it comes to navigating deep snow and withstanding cold temperatures. Another direct result of deep snow is easy picking for predators that are uniquely adapted to deep snow conditions and have little to no problem covering ground fast during these conditions.

Human interactions through snowmobiling, shed hunting, and snowshoeing also pose survival risks if animals are pushed too hard during these times. Most states will generally close down historic wintering areas to any recreational activities during these periods, but anyone venturing out at this time is encouraged to use caution and good thinking when encountering animals.

Feed programs have been setup across the west to either help wildlife get through the winter and/or to move them away from major road systems.

Does March mean we are in the clear?

Big game animals are getting a huge boost from some early spring weather, but keep in mind that their survival is not over, and the next 1.5 months is a critical time. People should continue to avoid disturbing wintering wildlife.

While warmer weather is on the way, all of that can change in an instant with spring snowstorms or unseasonably cold weather during early spring. Keep in mind that it takes time for deer and elk to build back up their body weight, so stress during this transition period can be fatal. 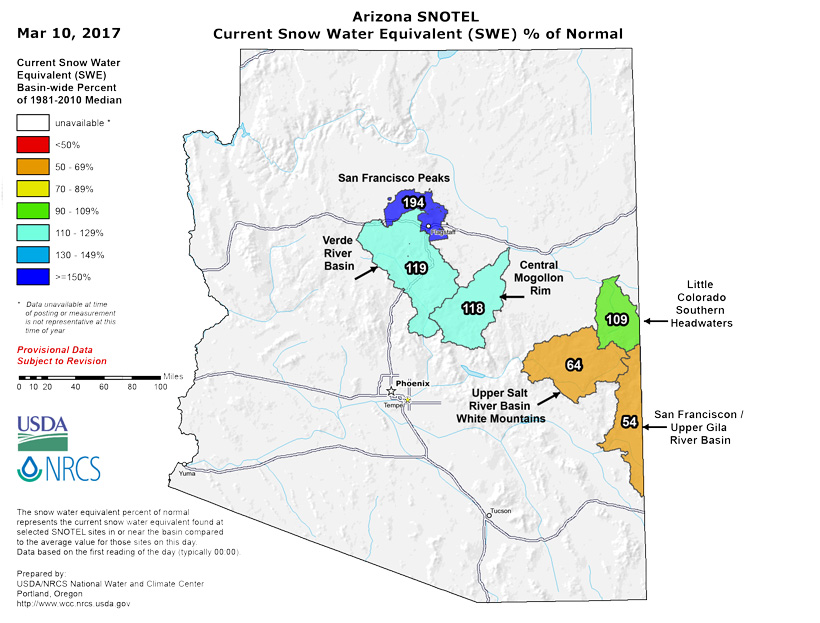 Data is fairly limited for Arizona as the state obviously receives very small amounts of snowfall and what does fall is in very isolated locations. Throughout nearly all of the state, snow levels are slightly above average compared to previous years; however, the area north of Flagstaff in the San Francisco Peaks area is seeing some incredible snowfall for this time of the year. Most of the animals that inhabit this region easily migrate into lower country where feed and less harsh living conditions are found. Hunters can expect little to no impact on animal populations. 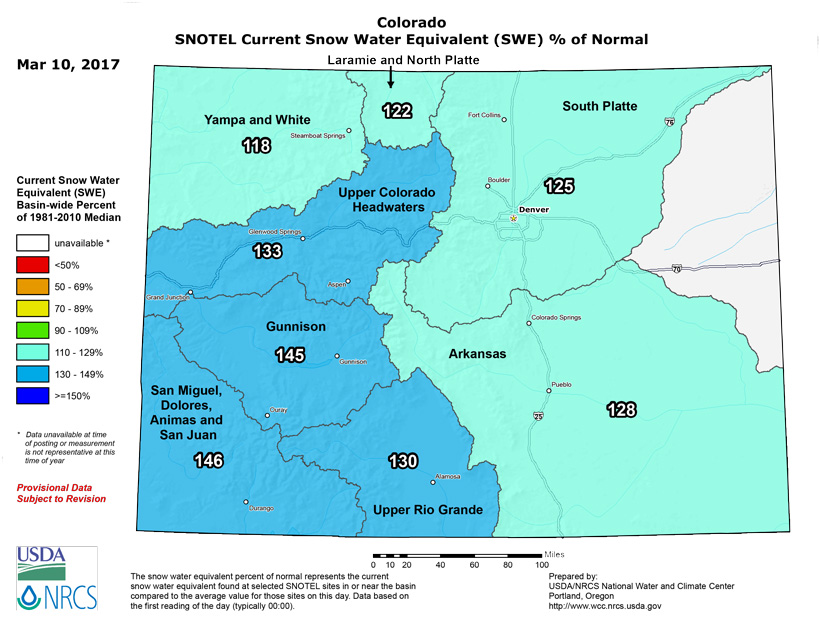 Colorado is seeing above average snowfall for most of the state with the areas around Aspen, west of Estes Park, and northwest of Durango seeing some of the highest percentages. While the animals on the Front Range in north central Colorado should have little problem escaping the deeper snows, the populations of deer and elk found in the San Juan will experience more trouble. Depending on how the rest of the year plays out, hunters applying in the southwest corner of the state may consider saving points for another year or cashing out in other regions of the state. You can read a recent Colorado news article we covered here that talks about their baiting program.

Recently Colorado put a temporary emergency shed hunting ban in place that impacts units in the Gunnison Basin (Units 54, 55, 66, 67 and 551). This closure is in effect from January 22 to May 15, 2017. The emergency order closes areas in the basin below 9500' to all recreational small game, predator, furbearer hunting, mountain lion hunting, and to the collection/possession of shed deer and elk antlers, bighorn sheep skulls and/or horns, and pronghorn skulls and/or horns. You can read more information here. 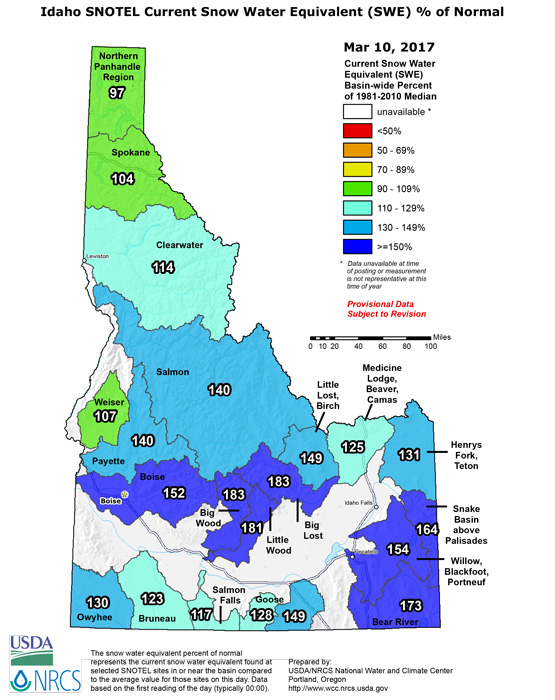 Nearly every Snotel site in idaho is currently trending far above average with every station trending at least 50% higher than normal, and in most cases much more. The panhandle region typically sees a high rate of snow and, due to it’s incredibly thick groundcover, could see high rates of winter kill this year. Another concerning area is the Bitterroot range, which house thicker vegetation and some very rugged country. South central Idaho has been hit the hardest with most of the data sites recording snow levels 100% above the normal range. In these areas, winter kill is a very real concern and something that will be monitored closely throughout the rest of the winter. With Idaho’s lottery system for drawing tags, it can be a very difficult decision for applicants this season; however, it could also end up being a great year to draw. Be aware, though, that trophy potential and populations may not be there to support a great hunt. 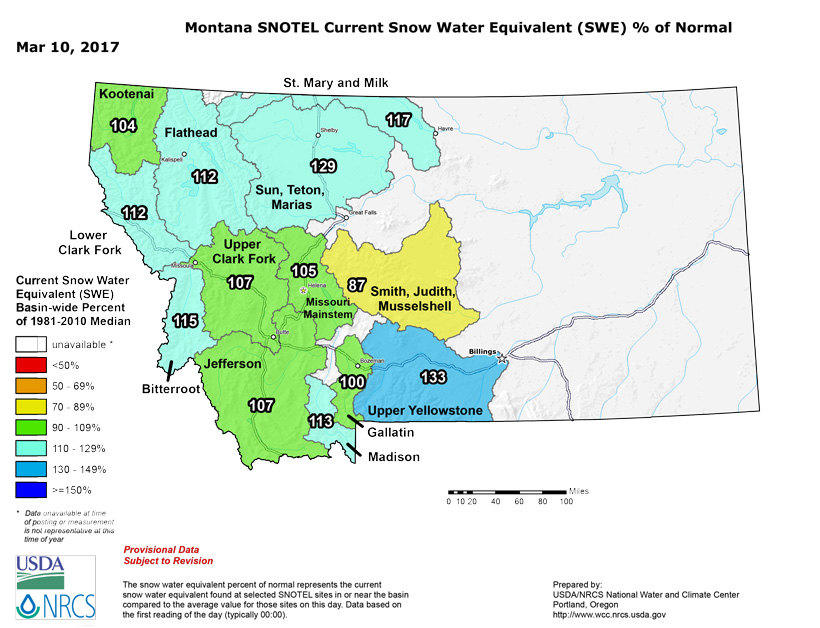 While not quite as bad as the neighboring state of Idaho, Montana is also experiencing a year of record snow levels with most sites recording above 50% of normal snowfall. For the most part, Montana has great wintering grounds for most animals and winter kill with be only in specific areas, including those in the extreme northwest corner of state around the Cabinet and Mission Mountains. This is  due to predation and lack of nutrient rich foods. These conditions may also prove to be prevalent in the Gravely range around Yellowstone National Park as well as in the Big and Little Belts though these areas have much better wintering grounds and historic migration routes. Hunters interested in hunting the eastern side of the state should experience little change in previous years’ animal conditions although there is some concern with antelope populations. 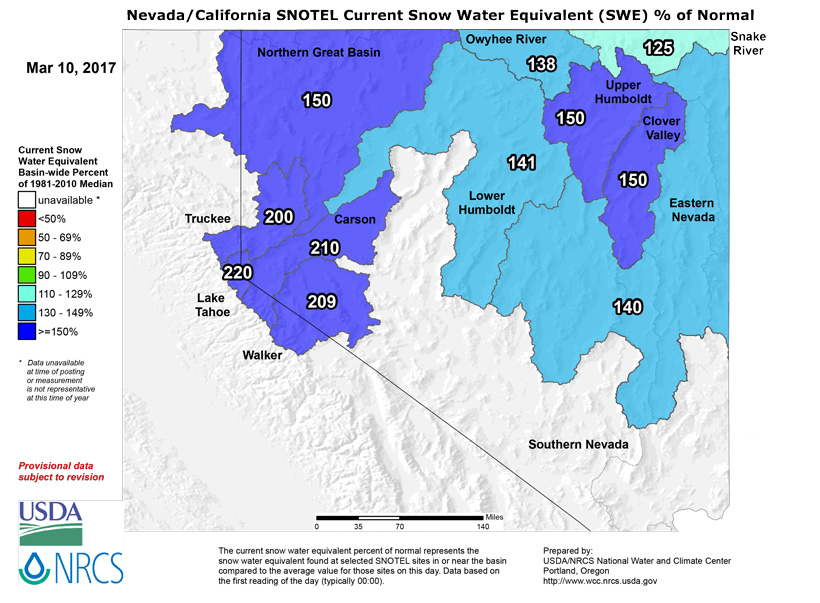 While some of the areas found within Nevada are experiencing severe drought conditions other areas are currently experiencing very heavy levels of snowfall. These areas, primarily found in the Ruby Mountain range and the mountains surrounding Lake Tahoe, are expected to bounce back with little impact to deer herds due to great wintering grounds surrounding the affected area. 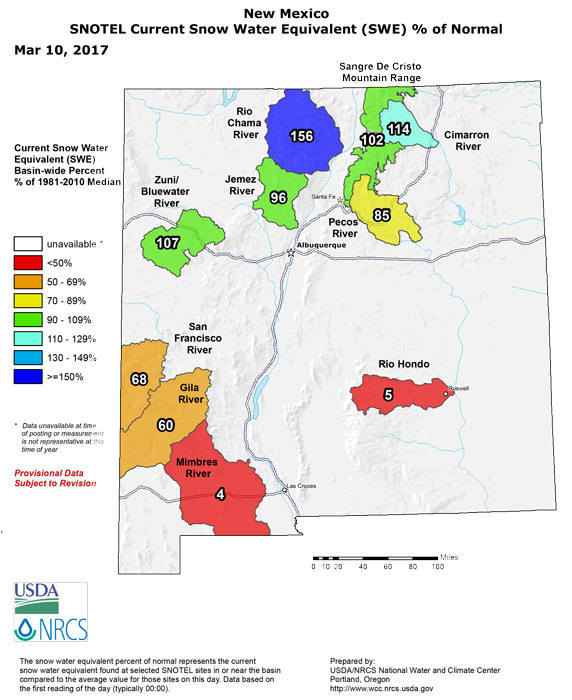 With it’s obvious dry climate New Mexico generally experiences very little snowfall; however, with the national trend this winter, it does have some areas that are being heavily impacted. In the north central region of the state, the Sangre De Cristo and San Juan Mountains have received the most snow with sites reporting anywhere from 90% to 187% of normal levels earlier this winter. Even with these extreme levels, populations in these regions should see very little effect in the way of winter kill and hunters should still see great hunting across the state. 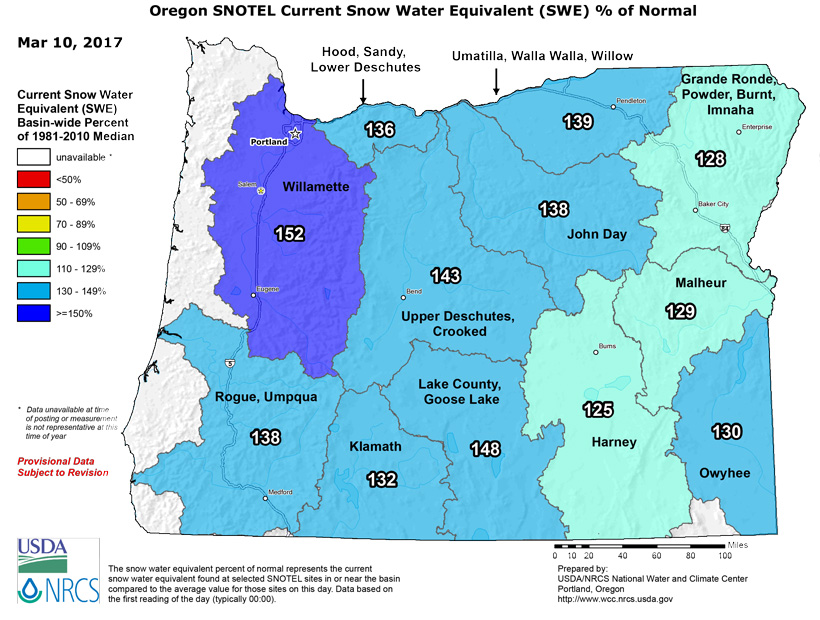 Oregon has been in the news a lot lately with the historic snowfall in the central portion of the state, which has caused serious issues for both animals and residents. Most of the state is trending far above normal levels and the Cascade region is experiencing some of the worst conditions. Winter kill in these areas will likely be significant because animals do not have any escape due to wintering grounds being completely consumed. Applicants looking to cash in points this year may need to seriously reconsider their strategy as many units will likely see major effects from this winter. 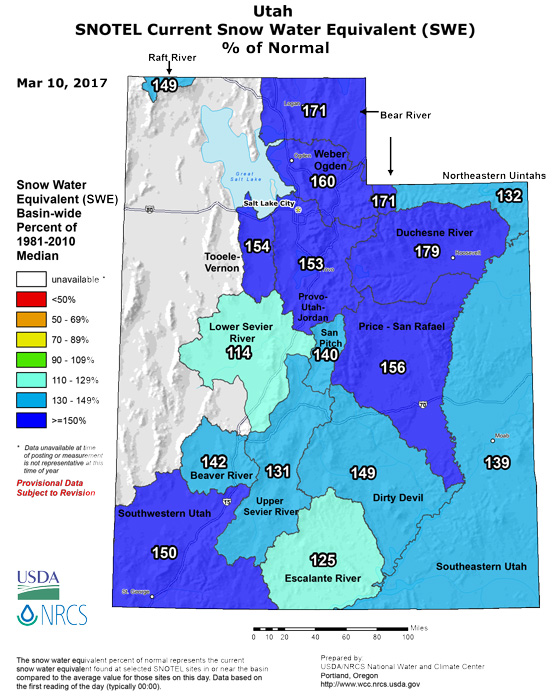 Utah has been hit especially hard this year with much of the central portion of the state seeing incredibly high levels of snow. Recently the Mule Deer Foundation implemented emergency feeding procedures for mule deer near Garden City in north central Utah. This region as well as areas found with the Uinta Mountains are seeing the bulk of the issues. High levels are also stretching all the way down to Cedar City in the southwest corner of the state. Deer and elk levels will likely be highly impacted this year with the final possible outcome difficult to predict.

As of February 2, the entire state of Utah is now closed to shed hunting on both public and private land until April 1. The order supersedes a Jan. 31 order that closed shed hunting in 11 counties. After the first closure was signed, concerns were raised about shed hunters moving to counties that were still open, which could put additional pressure on deer and elk in those counties. Read more here. 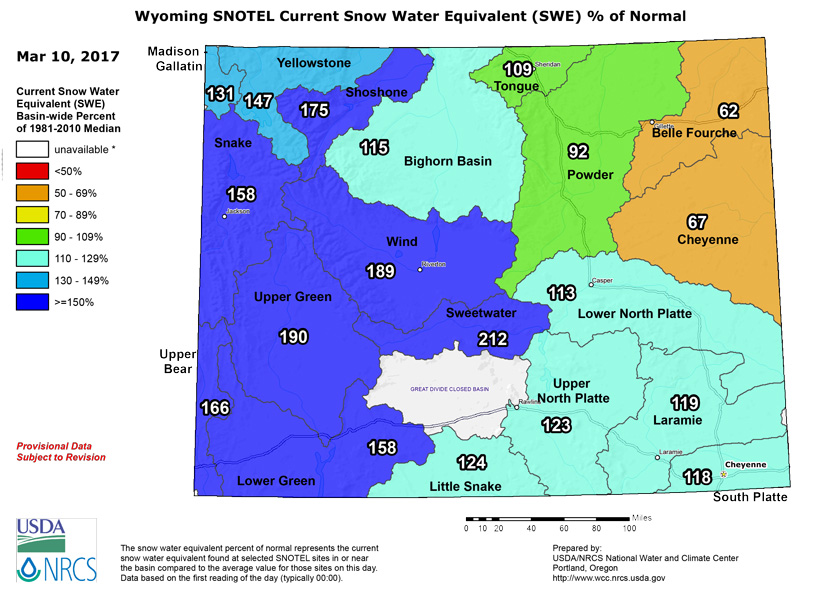 Wyoming is another state that has been hit particularly hard with snow this season with nearly the entire western half of the state reporting snow levels above 100% of normal levels with some areas even approaching 200%. Herd conditions in these areas are largely unclear at this point, but heavy amounts of winter kill are expected. The Bighorn Mountains in the north central portion of the state has also been hit very hard, which will undoubtedly lead to higher rates of winterkill. With Wyoming’s deadline for nonresidents to apply for elk already past (Jan. 31 was the deadline), this year may be a gamble as the extent of the damage is unknown. At least we will know more when the deadline approaches for deer and antelope on May 31. Hunters looking at areas taking only a few points to draw will obviously have the least amount to lose and should still see a good hunt, but hunters looking to cash out on some of the top premium units may need to consider holding off for another year or two. The downside to waiting, though, is that this period can allow point creep to catch up so, regardless, buying points is a wise move. You can read a recent Wyoming news article we covered here that talks about CWD concerns.