Why predators in the West need predators 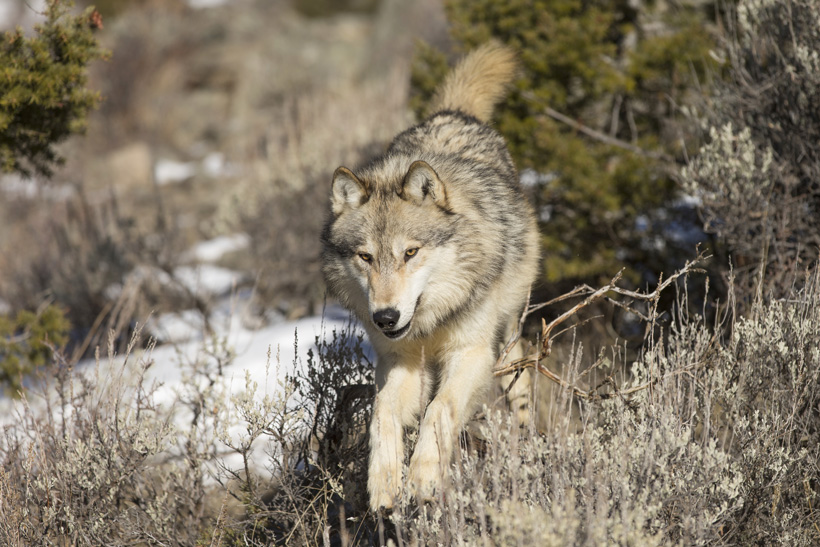 If you were to grab a piece of paper, crinkle and unravel it, you’d have the equivalent of a topographical map of central Idaho with elk living pretty much everywhere on those topographical lines.

I was recently in the region east of McCall, Idaho, hunting black bear by day and falling asleep to the roar of the Salmon River by night. Every inch of that area is alive with life from the fast flowing river to the elk and deer that are unsure of the sound of a diesel pickup; it's an amazing place.

On our second to last day, my father and I heard wolves howling in the distance while making our descent down a ridgeline. We both froze in our tracks and began scanning the backcountry.

“Those aren’t coyotes,” I said to my father.

The hair stood up on the nape of my neck. I was wide eyed, listening for the wolves to pinpoint their location and, most importantly, figure out how close they were. It was the first time I heard the chilling howls of the elusive Canis Lupus. Even as a seasoned hunter chasing bears in the backcountry, the sudden presence of wolves presented a different ballgame.

My encounter with the wolves was a surprise, but an expected one in terms of where we were. Wolves have been linked to the decline of local  elk herds, leading to a drop in revenue gained by local towns that  depend on business from nonresident hunters during hunting season. Wolves have been in the news a lot and goHUNT has recently reported the following stories about wolves in Idaho: killing of four bear hunting hounds, anti-hunting groups suing over the management of wolves and the Rocky Mountain Elk Foundation even stepped up to the plate with a grant to help keep Idaho wolves delisted.

The impact of wolves in Idaho

The great wolf debate is a sore topic for many Idaho residents. Some people view wolves as spiritual and majestic creatures that hold together the circle of life. Others disagree with their reintroduction; still others view them as a nuisance and creatures that kill big game, rendering them unable to provide food for their families.

Lorainne Munn, a year-round Yellow Pine resident (population, 32) told goHUNT, “We didn’t really hear about wolves until 2004 or 2005. Then we started hearing them around town,” she continued, “2008 is when they [wolves] moved into town. We had bad fires which may have had something to do with it, and that was when they [wolves] took a dog off a porch and killed an outfitter’s mules. Why would they introduce an animal that wasn’t indigenous to the area?”

People come to the small town less and less seeking hunting opportunities. If there aren’t any animals to hunt, why go? Munn has begun to see a slight rebound in the numbers, but it is still something to be upset about. The loss in elk hunting tag revenues directly affects the state. The revenue made from elk hunting licenses represent 20% of Idaho Fish and Game's overall license and tag revenues, and serve as match for federal funding sources that comprise another significant portion.

“We just don’t have the hunters we use to,” says Munn to goHUNT. Less hunters means less dollars for the local economy, and a town like Yellow Pine is greatly hurt by the lack of big game animals in the area. 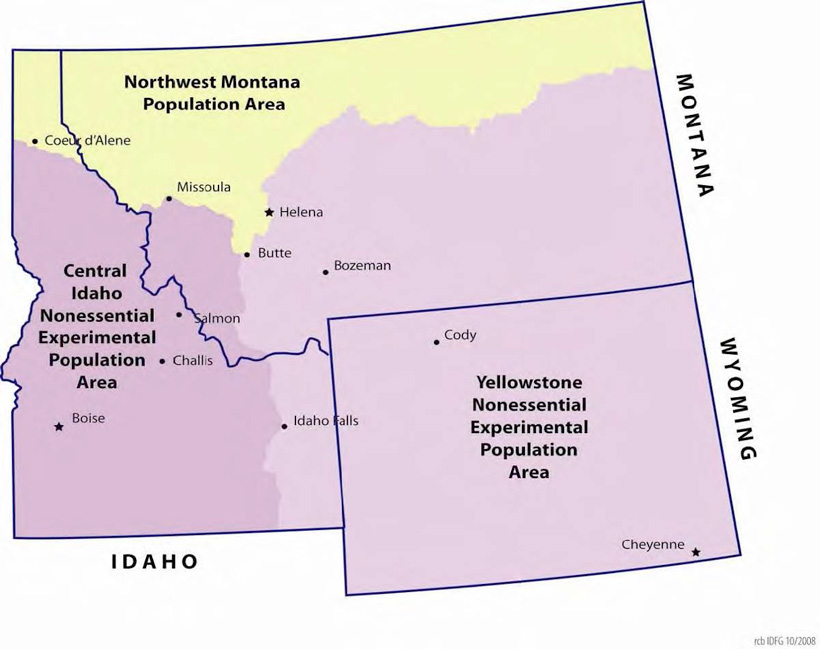 Recovery areas established by the U.S. Fish and Wildlife Service in 1994 to restore gray wolf populations in the northern Rocky Mountains of Idaho, Montana, and Wyoming. Source: USFWS

In 1995 and 1996, 35 wolves were taken from Alberta and British Columbia, Canada and reintroduced into central Idaho. Management plans were drawn out, redrafted, and inevitably failed until 2006 when wolf management and conservation was transferred from U.S. Fish and Wildlife Service to Idaho.

A total of 945 sportsman hunted Idaho's Unit 25 in 2005 and 98 elk were taken in the unit that year. The numbers were nearly cut in half in 2006 and hit an all-time low in 2011, when there were 504 hunters and 38 elk harvested. The trend slowed in 2012, three years after wolves were removed from federal protection (after two hunting seasons — in 2010 wolves were temporarily placed back under federal protection). The number of elk hunters in Unit 25 was 991 in 2015 with 104 elk harvested.

Trent Bullock, co-owner of Elk Creek Outfitters, a goHUNT Business Member, operates northeast of Unit 25 in the Frank Church Wilderness River of No Return — the largest piece of wilderness in the Lower 48. Bullock witnessed first-hand the devastation that wolves had on the elk population.

From 2006 to 2010, Bullock was able to see a clear lack of yearlings. Yet, due to the reintroduction of wolves, elk weren’t breeding as fast as the wolves were killing. At one point, he didn’t think elk would be seen again in Frank Church, but within the last two years, Bullock has found hope for the future of the elk population.

“Every elk on the ground right now was raised with wolves,” says Bullock. “They aren’t ignorant anymore.” The wolves aren’t as arrogant, either. Since hunters have been able to hunt and trap, the primary purpose of predator management has played an effective role. 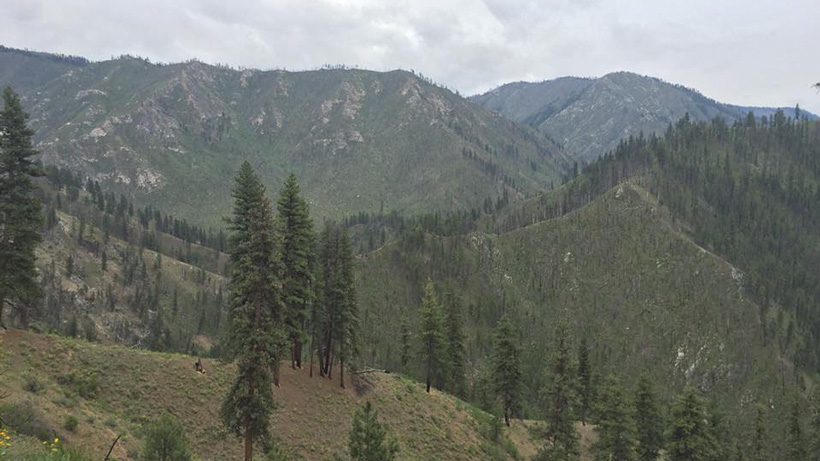 Weather and fires may also dictate a rise and fall in the elk population. Nathan Borg, an Idaho Fish and Game wildlife biologist in McCall, ID, says that wildfires, in terms of elk, are usually a good thing. “It takes a year or two for vegetation to come back, but it does create a more productive habitat,” says Borg. “There is an increase of nutrients found in new growth.”

Last year, the McCall zone biologists radio-collared elk near Warm Lake to research their response to fire. The data showed that the elk moved over a ridge or two but did not vacate the area entirely. Borg considers this past winter as average and, prior to that, the area experienced three mild winters with few winter kills. The calf survival rate has been higher and there has also been a consistent harvest of wolves.

A recent elk survey showed that recruitment (number of calves that are born and survive their first year) is the highest it’s been in the last three surveys with around 29 calves per 100 cows. Borg says that, ideally, they would like the see the number in the high thirties, but overall it’s a welcomed increase. Elk numbers in the McCall zone bottomed out in 2008. Since then, the biologists have flown the area twice. The most recent flight was in 2014 and provided great improvements: the cow count was around 3,652—close to the upper objective for the zone at 3,700.

The elk of the McCall zone remain, despite the reintroduction of a new predator (wolves). Sportsman played their necessary role of maintaining and restoring the herds through hunting and conservation efforts. Yet, the zone hasn’t been able to restore itself entirely to the balance that once existed. But there is hope. Hope exists in every calf turned cow that reaches estrous and each triangular notch a hunter cuts out of a wolf tag.