theBULLET - top 44: One weapon to hunt with the rest of your life 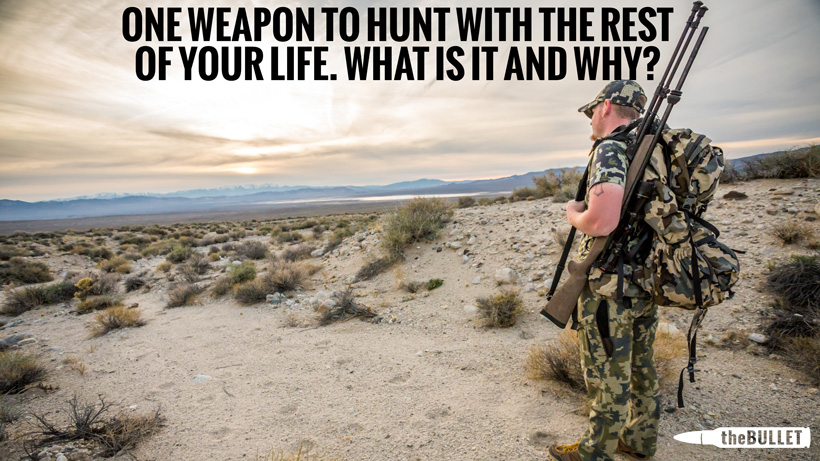 Two weeks ago we asked hunters on Facebook, Instagram and Twitter to answer a very important question: If you had to chose one weapon to hunt with for the rest of your life... what is it and why? This is what they had to say and a breakdown of the responses.

Here are our favorite 50 responses:

I don't consider them weapons. Just tools of my enjoyment. The first rifle my dad gave me or the bow I hunt with today. You wouldn't ask me to choose my favorite child. — Darren F. (Facebook)

Archery equipment, hands down. Intimate, personal and traditional. I hunt deer during rifle season so I can hunt the rut. I use my bow. Love it. — Robert H. (Facebook)

Compound bow - I started my hunting career with a bow and I will end it with one. I arrowed a mule deer buck before I ever even fired a rifle for the first time...smile emoticon. — Nick T. (Facebook)

12 gauge because of the versatility of being able to hunt anything between, for example, dove with birdshot and game as big as hog or deer using 00 buckshot or even slugs. — Francisco S. (Facebook)

Archery equipment, with the bow and arrow I can harvest every game animal in the world and it allows me the opportunity to get up close and personal with the animal I am pursuing. It forces me to practice the art of the stalk and allows me to make a silent kill. — Immanue R. (Facebook)

Bow becasue you can kill most anything with it without ruining meat. And the gov won't ban them. — @cburford_ (Instagram)

Ruger Guide Rifle in .375 Ruger. Best all around rifle and caliber/round I've found in over 60 years of hunting big game including worldwide for dangerous game to whitetail deer at home! — Larry W. (Facebook)

I choose my hand me down rifle from my dad Remington 700 in a 270. Next would be my bow. I love hunting Az Desert Mule Deer and javelina. — Ernie C. (Facebook)

A bow. The feeling you get being that close to an animal along with carrying on the traditions of early hunters. The challenge in being able to stalk great and honorable animals. There is nothing like it. — Bear T. (Facebook)

Remington .270. Just what I/ve grown up doing is using a rifle. Even with my rifle in hand, I choose to get up in close with the animal to make it more fun. Just like to see how close I can get. — Quincy R. (Facebook)

My .308 Winchester, reloading supplies are always out there and you can find used brass at a shooting range. I have killed just about everything except for a grizzly with my .308.... — Kels M. (Facebook)

I truly can't say once specific weapon..... Reason being there are entirely too many great options and the ever changing industry provides something different or game specific all the time. All I can say is grab what you think will get the job down and go Hit em Hard! Being out there is what it's all about.— HardLoadHunting (Facebook)

My .308 bolt... Howa, a mag fed .308 bolt rifle sub Moa out of the box which can defend my family AND put meat on the table. DOPE'S out reliable and easy on the wallet for both initial purchase and feeding down range. — Troy P. (Facebook)

Compound bow. Most of my best experiences hunting have involved it and it gets me more in touch with the world than other weapons. — @mrhansen9 (Instagram)

Traditional bow! Just because I would never be without arrows. — @alphahunter45 (Instagram)

In an only hunting bigger game situation it'd have to be a compound bow because it's the funniest in my opinion. In a survival or shtf situation a Remington 870 12 gauge due to versatility. You could shoot bird shot for birds and smaller game and 00 for self defense and larger game as well as slugs. Plus you could swap out barrels to a slug barrel if needed for longer shots. — Scott P. (Facebook)

My old FN Browning .338 Win Mag 98 Mauser action 20 inch barrel talley detachable scope mounts with a brockman peep sight 3X9 Swaro scope. Why? Because it ALWAYS works. Squirrels to brown bears it kills it all dead. Does not excessively destroy meat, slim easy to carry, it has been my primary carry rifle as Alaskan Master Guide #128 since 1987 and was originally purchased in 1963. She has been in my hands more months of the year than any other gun. It has saved my ass when a wounded bear was stopped close enough I had snot on my coat. When it came time to go to Africa I left the custom 450 Ackley and 30.06 Ackley Imp in the rack and took the old Mauser. Worn. No blueing left chipped paint on the old Bell and Carlson stock, I bedded the action into as a kid when they first came out, I picked up the "meatblower" (named by one of my hunters). Why?Because it works. Enough cartridge to do any job well. Manageable recoil. Short light fast handling. Easy to carry. MOA accuracy. Most importantly she ALWAYS feeds, ALWAYS ejects, ALWAYS fires. I can bet my life and anyone else's life on her. — Jeff P. (Facebook)

Remington 870 express magnum, black synthetic stock, 12 gauge, 26" barrel. I would like a full set of Carlson chokes and a good sling. That tool can be used to take any game species in North America bar none when paired with the correct ammunition. If you could change barrels then it wouldn't even be fair!! Any 3.5" pump would work depending on taste but I'd take a Remington. — @msu_taylor_hall (Instagram)

.300 wsm. Similar performance to .300 win mag but easier on the shoulder. A bit much for prairie goats or deer, but good up to all North American game. — Hampton Y. (Facebook)

A muzzleloader, it has huge opportunities seasons wise and when I'm 90, I won't be able pull a bow back but I'll be able to load a muzzy! — @travisbertrand (Instagram)

My Howa .308. Food on the table from smaller game to elk and a good defense rifle and I have reloaded enough ammo to last a while if there be a shortage. — Scott W. (Facebook)

Longbow. Reason being, I'm pretty competent with one, I can make my own arrows, strings, points, etc. And should the bow break, I can just make another. — Tom W. (Facebook)

7mm mag- best all around cartridge. Can be ethically used on anything from an antelope to a grizzly bear. Mine is a Remington 700, old school walnut stock (beat to hell) stainless fluted 26" barrel with a Swarovski 3x18x44. I haven't moved the sights in 5 years. It's 2" high at 100 yards and 6" low at 300. The damn thing is BULLET PROOF!!! I have other guns, but they just don't get used, I might love this gun a little too much! — @howell_jimbo (Instagram)

My bow because having the ability to drop an animal at 500 yards isn't hunting — Mike R.​ (Facebook)

Weatherby Mark V .300 Mag. Don't need anything larger than that as long as your shot is true. — Robert K. (Facebook)

Bow you can kill anything just about. — @countryblackman (Instagram)

Sling shot, because you can defeat giants with it! — Ben R. (Facebook)

Any solid 30 caliber that I can shoot 180 grain bullet. On a Remington model 700 platform. Lots of other factors would play into this choice. 300 RUM would work and it can handle anything thrown at but so would an old 30-06, after that ability and skill would take over (cool to read everyone's response to gohunt question) great discussion — @hunthard_ (Instagram)