The ethical dilemma of doing what is right 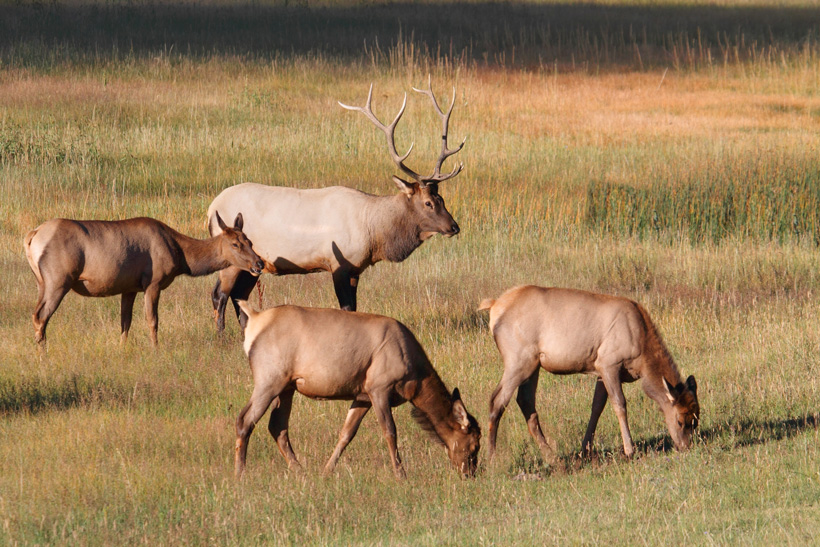 Sometimes the lines between ethics, politics and laws blur and it becomes difficult to determine the best strategy. Here is a story about a recent hunting situation that happened during the 2014 hunting season in Idaho while I was on a hunt with my daughter. As you will see, I had some difficult choices to make.

In 2014, my daughter had a tag for a doe antelope to fill. We headed south from Hill City, Idaho on Swamp Road. We planned to drive through Bliss, Idaho into country I have never been in before, but we only got a mile or so out of town before we encountered an elk bedded down in the ditch. I slowed down so that my daughter could look at it. I thought it was strange to see a cow elk there. 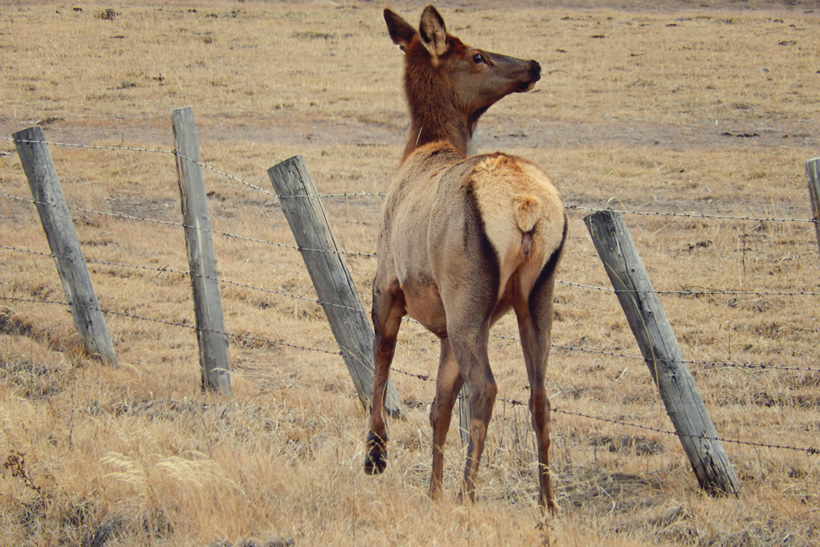 A close up photo of an injured cow elk. The left front leg was completely broken (can't see it in this photo). Photo credit: Brent Daley

The elk stood up, holding one leg up, as she trotted along the road. I could see that her leg was broken; it was basically flopping around all over. I managed to get some video of it which I sent to an Idaho Fish and Game officer. Then I decided to back away from her. She went out in the field and bedded down again. My daughter was in total shock at seeing this poor cow elk. Even though she hunts, nobody likes seeing wildlife in distress. I knew I could not just let this go without taking some sort of action and, luckily, I had cell service.

Call to Idaho Fish and Game

I figured that the state office would be closed on Sunday, but thought there might be an emergency hotline that I would be forwarded to so I called the headquarters. But there was no hotline so I decided to call the Citizens Against Poaching (CAP) number since I was pretty sure that line is manned 24/7. Fortunately, I had the number already programmed in my contacts. Yet, the person I spoke with at CAP told me that they do not deal with injured or distressed animals, only poached and dead animals, after I relayed the situation. The person offered me some other phone numbers for a place called Wildlife in Distress Society (WIDS). So I decided to give them a call since I did not have any other option.

When I contacted WIDS, Toni Hicks answered the phone and was able to offer me some guidance. She told me she was licensed and authorized by the Idaho Department of Fish and Game (IDFG) since 1987 and that I could shoot the animal. She said that she did not know about harvesting the meat, but she did have the power to tell me to shoot it to put it out of its misery. This caught me by surprise pretty quickly. The red flags went up. I am sure that you can see some serious issues with this like I did, but I will point them out anyway as I also had to explain them to my daughter.

You shoot the elk and leave it there. Someone comes along and says it has been poached. IDFG comes out and now there is a huge mess.

You shoot the elk and continue harvesting it so it is not wasted. Someone comes along and thinks you are poaching, calls the sheriff and there is a huge mess.

None of these scenarios seemed very exciting to me. So I called my wife and she got online to try and find some numbers or contacts in order to get this sorted out. I think she finally ended up talking to an IDFG employee on Facebook. He told her that the sheriff acts as a conservation officer in lieu of the IDFG officer when they cannot get to the scene.  I believe that he contacted the Camas County Sheriff and gave them my number. As I am making these calls and trying to figure out what to do, I am still hanging out about 100 yards away from this elk just in case someone needs me to do something.

Call from an IDFG officer

I finally get a call from an IDFG officer out of Twin Falls. He said that he was told to call me, asked what the situation was and where I was located. I described the scene and told him the precise location of where the elk was bedded down. He said he would contact the appropriate people and take care of it, then thanked me. I asked if there was anything else left for me to do and he said no. I responded, “OK. I'm heading back out to hunt antelope.”

I think this whole ordeal took at least one and a half hours making calls, waiting, and trying to figure out what to do.

We leave the area where the elk is bedded down with her head down. A few hours later when I come back through the area and she is still in the same spot, still alive. As I head out to the intersection to get back on the highway, a sheriff drives by me on the highway. Maybe they were not contacted or did not feel it was important. I am not sure of their situation. All I know is that I did what I could do. I headed back home, thinking that there was nothing more I could do about it.

Weighing in on the ethical and moral decisions 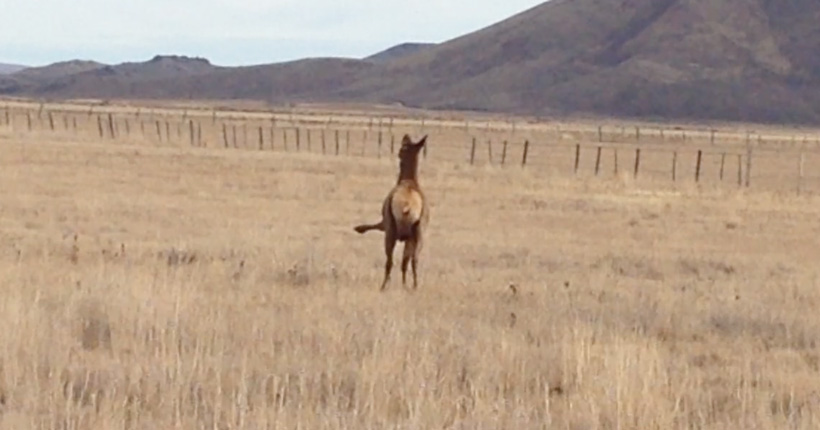 I know what the ethical and moral decision would be in that case, but politics and legality play too much of a part in that situation to take a chance on making the wrong move so I did what I was told. I am sure in most cases someone is very honest and forthright when it comes to a situation like this, but like anything there are those out there that would abuse the privilege. I do not know how that elk got injured. It could have been a poacher or  maybe a car. Either way, it suffered. Hopefully someone got out there to take care of it and it did not die an even more horrible death by being discovered by wolves or coyotes.

Hopefully, this account of the event can help put together some sort of strategy for state agencies in these situations. Maybe there should be a hotline on the weekend or afterhours for situations like these so that ethical hunters can contact an appropriate person to make a decision. In this case, Facebook was a lifesaver for me and Ben, the IDFG officer, played a huge part in being able to resolve the situation enough so that I could move on with the rest of my day.

Ben Studer, with whom you and your wife corresponded last weekend regarding an injured cow elk, shared your email with us, as we are familiar with both wildlife and enforcement issues in both the Magic Valley and Southwest Regions.

First of all, thank you for your perseverance in trying to help the injured cow elk near Hill City last weekend. We appreciate that many Idahoans really care about wildlife and make sincere efforts to do the right thing in tough situations. These types of situations may be difficult, but provide excellent teachable moments and we applaud you taking the time to teach your daughter the right thing to do even in the face of personal cost. Your efforts to ensure that the injured elk was dealt with promptly and humanely exemplify ethical hunter behavior, and we thank you.

Your correspondence highlighted the frustration of trying to get ahold of an appropriate Fish and Game staff person during weekend or evening hours. Relative to the size of the state, we are a small agency. With the exception of the Conservation Officers, most of our staff are centrally located around our Regional Offices. These limitations restrict our ability to be as responsive as we would like at times. That being said, we will work on a couple of things to try to make this better in the future. First, we’ll try to better publicize some information about who folks can call during odd hours to address Fish and Game issues. Generally, during weekend and evening hours, this will be county dispatch or sheriff’s offices. County dispatchers have the ability to contact IDFG enforcement personnel both by phone and via radio, who can then respond as appropriate. Within regional offices, we will also work with county dispatchers to provide contact information for other Fish and Game staff, such as biologists and managers, in the event enforcement staff are unavailable.

As you mentioned, the CAP line is well-publicized, but exists primarily for enforcement violations. The CAP hotline is a call center located in Utah. CAP is one of many customers that the call center services, and few, if any of the call takers are hunters. This is the trade-off we accept to ensure that someone answers the phone 24 hours a day, 365 days a year.  We will work with the contractors who take the CAP calls to ensure that they direct non-enforcement calls to more appropriate agencies. We appreciate your caution in the communications you had with the “Wildlife in Distress Society.” While IDFG staff can authorize someone to dispatch an injured animal, we are unaware of any instance in which we’ve given that authority to outside entities, and we’ll try to follow up with Ms. Hicks to clear things up there.

Properly responding to injured wildlife is something we struggle with very frequently. On a weekly basis, and sometimes more often, we receive calls about injured birds, deer, elk, badgers, foxes, and nearly every other wildlife species in Idaho. It is hard to see an animal struggling, and each person has a different response regarding what the proper thing to do might be. Frankly, we are unable to respond on site to every injured animal report – we simply don’t have the manpower, and sometimes have other priorities that preclude us from responding promptly. Furthermore, we’ve observed that in many cases, wildlife have a remarkable ability to survive even severe injuries, and are therefore careful about authorizing members of the public to dispatch animals without our staff ever seeing them. Your video certainly suggests that’s not likely the case with the elk you observed, and that her injury was likely to eventually be fatal, but it’s sometimes very hard to tell what is going on from a phone call.

All that said, we will work to make sure that the public and sister enforcement agencies all have better information about how to report Fish and Game issues during all hours. At least then an officer or staff person can communicate with the reporting public and evaluate the individual situation.

Again, thank you for your diligence with this elk, and for bringing these communication issues to light.

We are both avid hunters ourselves, and can absolutely sympathize with the emotions you must have felt watching that elk. The dichotomy of pursuing a creature with lethal means and caring enough to be distressed at their suffering is not something that is easy to reconcile, but is the root of hunting ethics. The fact that you cared enough to take the steps you did represents everything that is right with hunters as conservationists in North America. Please do not hesitate to call either of us at any time, should you have any other questions or want to discuss things further.