Managing a hunting season with a newborn 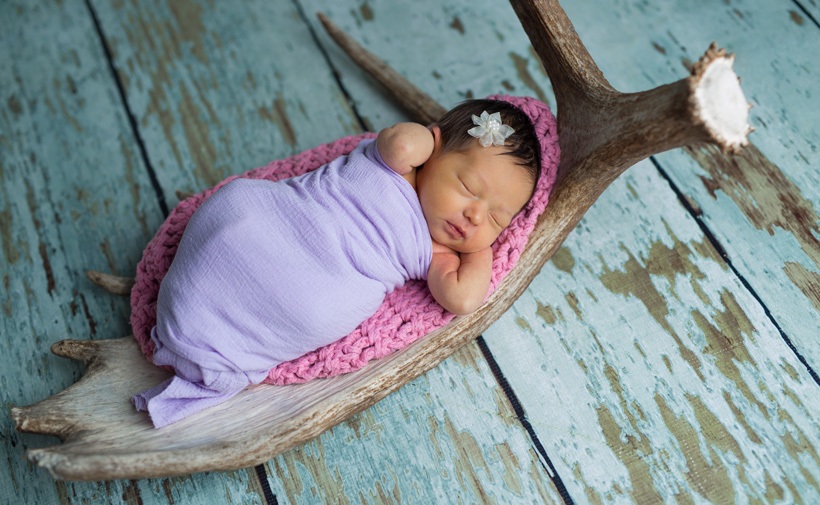 “Dave, I don’t want you to freak out yet but I just took a pregnancy test and it was positive.”

I stared at my phone for a few moments trying to absorb the text my wife had just sent me. This is something we had been wanting for a while but was this actually real? In a numb state of mind I clumsily began counting on my fingers, “...July, August, September…”. September, yep. Here I was, a guy who worked in a bow shop and someone who is absolutely obsessed with elk and I rolled the dice and had a kid coming in September! This was going to be an interesting season to say the least.

The comical factor of my impending predicament spread quickly through my circle of friends as the congratulation texts rolled in. Some offered solid advice while others joyfully offered to hunt my areas for me. How was I going to find time to chase my beloved elk while making time to also be a dad? How do you even be a dad? Help!

Once you’ve received the news that your new little bundle of joy will be arriving during the hunting season it’s time to sit down and evaluate your new and attainable goals. If you are a hunter who is building points in a state for a specific animal it may pay dividends to back off for a year or more. If you draw a primo tag, are you going to have the time to devote to the hunt to get what you want out of it? Obviously, this only becomes even more amplified when you factor in out of state hunts as well.

While most guys will admit that they would like to take the biggest animal on the mountain most will also admit that the game meat that sustains their families for the year is a major driving force. Looking into additional permits and tags that can be drawn in your "home" area can be a great way to increase your opportunities and potentially fill the freezer.

Scheduling your season out as you have in years prior will also become increasingly difficult. As we all know babies decide when to meet mommy and daddy on their own schedule and this can quickly throw a wrench into any plans scheduled around the due date. Keep an open schedule and hunt when possible.

Managing your time and expectations 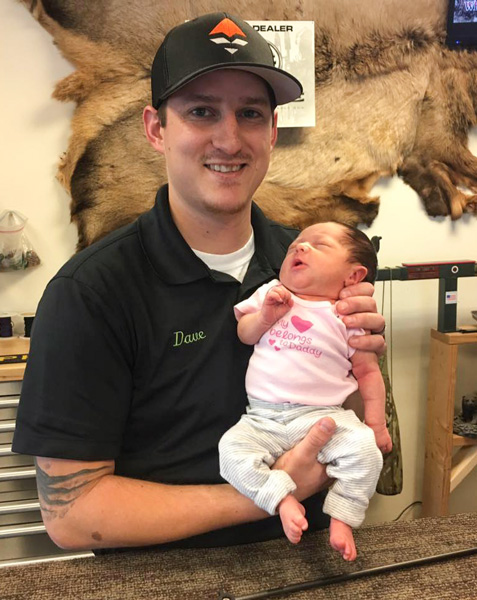 Dave with his newborn visiting the archery shop.

After you’ve began planning out your strategy for the season you’ll have a better grasp on where to set the bar in terms of expectations as well as how much available time you’ll have. Of these, time management will be the most fickle beast and one that needs to be managed wisely and carefully. You’ll now have many obligations that need to be met on the home front and it’s important that these are dealt with accordingly.

The simple and unfortunate fact is that your season will not be as intense and long lived as in previous years and you’ll likely lose a “free” day here and there to doctor’s appointments, family days or just simply giving your spouse a break. The sooner you can come to grips with this the sooner it will be easier to see the bigger picture and get the most out of your hunts.

Another aspect of this challenge will be dealing with your expectations for the season. Every year I like to lay out goals for the season which can include trophy size, exploring new areas or any specific adventure. Whatever your specific goals may be it’s important to note that you may or may not have the time to effectively achieve these and it may be necessary to shift your plans around. Personally, my number one focus for this season was simply getting some meat in the freezer and, by planning accordingly, I set myself up for a great season with some great eats for the winter months.

One aspect I really began to hone in on for this season was utilizing every ounce of daylight I had available. In a normal elk season I’ll generally spend 10 to 14 days chasing elk in September; whereas, this season I would be lucky to get five to six days. Backing out and waiting to see if my quiet elk would be fired up tomorrow really wasn’t an option anymore. For each one of my hunting days I made a commitment to myself that no matter how bad the weather or hunting was I would stay out and keep diligent. This can obviously become increasingly difficult as the season drags on, but remember that it only takes 30 seconds for your entire season to turn around. By staying out and making the best of your days you will only increase your odds of success.

Finally, the most important part of planning your season with baby: momma. Being a hunting family can be a two way street when it comes to the baby. If your spouse hunts they will no doubt want to run for the hills when given the opportunity, especially after hearing the heroic tales of your own escapades. While finding a sitter can be difficult at times, there is no better way to provide a relaxed escape for your lover than to wisp her away to the mountains to freeze, get dirty, and potentially punch a tag. 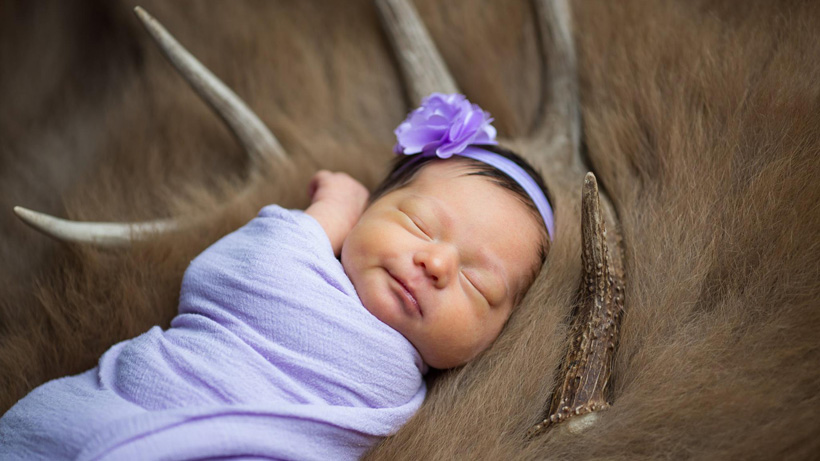 Even if your significant other doesn’t hunt they will still likely need a break. The amount of work my wife puts in on a daily basis to take care of our daughter is astounding and a little frightening. While it’s easy to get caught up in the “she’s the mom and enjoys this” train of thought it couldn’t be further from the truth. Babies are awesome when they are happy, smiling and loving you but flip that attitude into an unhappy, squirming and crying baby and you have a whole new experience. Sometimes, taking a day off when the hunting is slow to allow your spouse to sleep a few extra hours or maybe finally take a shower can pay dividends in the long run.

With every family having its own intricate set of nuances and dynamics it’s important to plan your season accordingly to follow suit within your given parameters. Not everybody will experience the same season with a newborn as different scenarios are likely to pop up unexpectedly.

By ensuring your new family's needs are met, planning your season accordingly and establishing realistic goals, success can now become an object well within your grasp. Originally, I thought the season would look something like a live minefield with success in punched tags being the prize on the other side. Yet, as the season progressed, I discovered that this really wasn't all that hard and a successful season wasn’t an outlandish thought.

The bottom line is this: don’t let traditional rules dictate your season for you. This is a precious time you will never have back and spending this time with your baby (even if they hardly notice dad for the first few months) is incredibly important. If the hunting is slow and and you want to see your family, then go home! There isn’t a sane person that would ever fault you for wanting more family time. Success for the season is defined by you and nobody else. 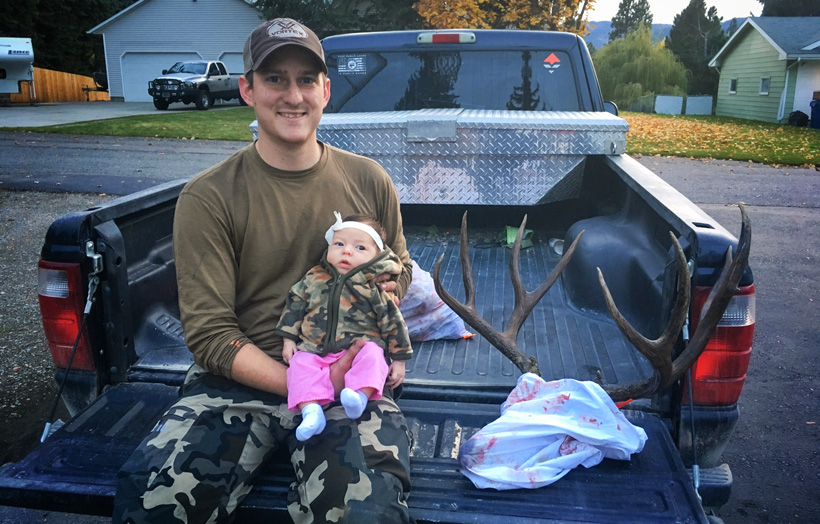 In the beginning, I was dreading my situation, but, now, as the season has drawn to an end, I can confidently sit back and say that the moment I got my trophy photo with my daughter and a hard earned deer made all of the struggles seem petty and small. After all, this is one season with some minor setbacks and I have many more ahead of me. Sure, ideally every hunter would love to have have their kids during the off season, but wouldn’t it be even better to spend their birthday with them in elk camp?