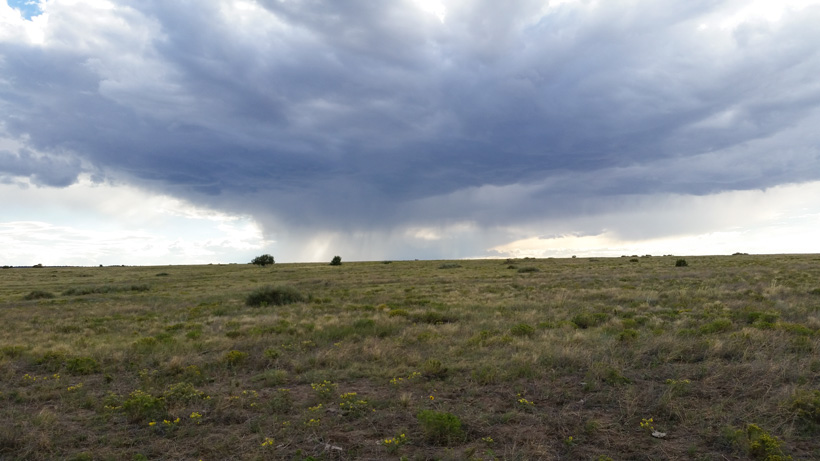 “You reap what you sow!” This is a saying that I have heard throughout my life whether it was from my family or one of the many sports coaches I had growing up. As cliché as it sounds, this is a saying that I often find myself repeating when the going gets tough and, on this hunt, the saying couldn’t have been more true.

This adventure began back in early 2016 when I made the decision to become a goHUNT INSIDER member and I’m glad that I did. After spending countless hours on Filtering 2.0, I narrowed down my selection to try to draw a Colorado antelope buck tag. Once June rolled around, I learned that my buddy and I had luckily drawn our antelope buck tags. Over the next few months, we spent a lot of time looking at the Unit Profiles and reviewing maps for Unit 136 and 143. 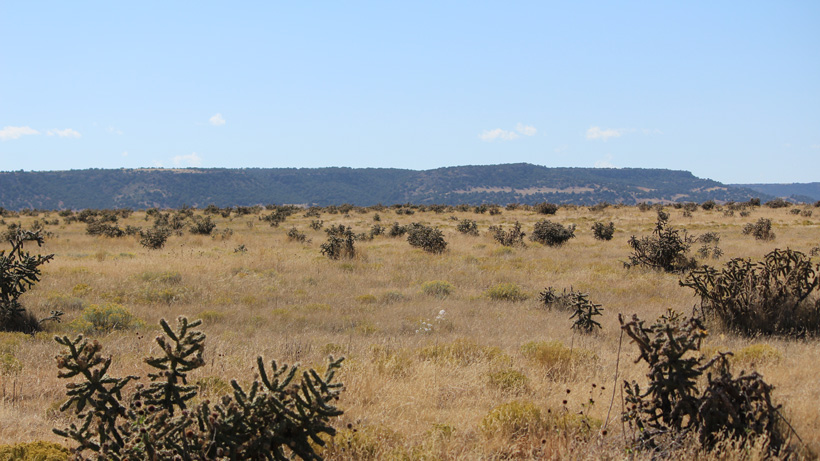 In late August, my hunting partner and I decided to take a quick trip up to our units to do some scouting. The scouting trip turned out to be very successful because it allowed us to get an idea of the landscape and terrain. 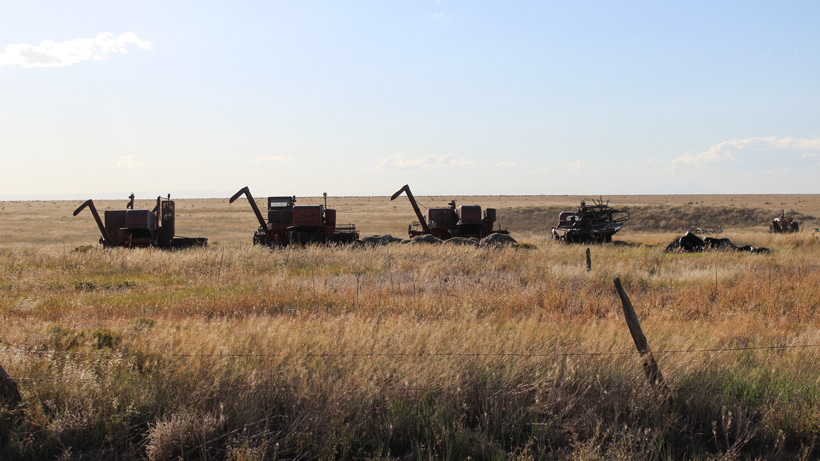 Some old farm machinery we found while driving around scouting one day. 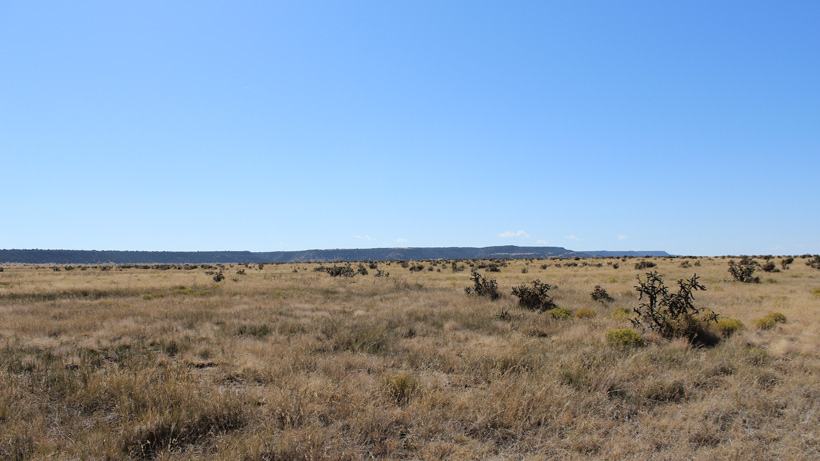 It's amazing how well an animal can hide in a landscape like this, but they are masters at hide-n-seek! 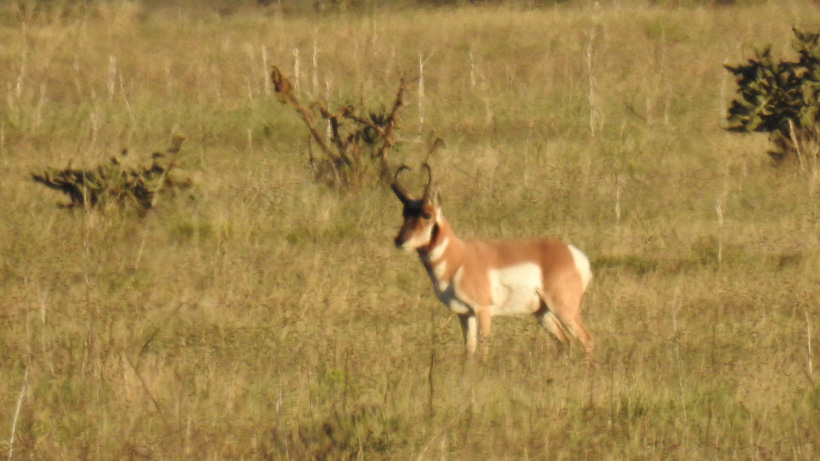 While scouting, we were able to locate many young bucks and smaller herds of antelope. 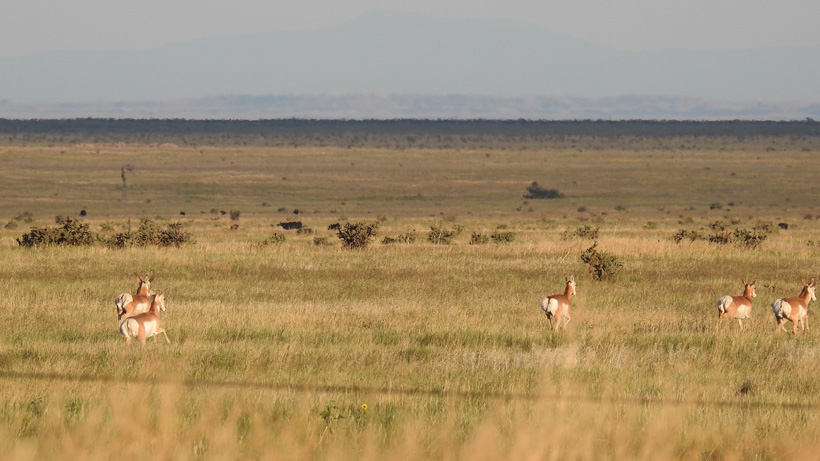 This became an all too familiar sight, not only while scouting but during our hunt as well! 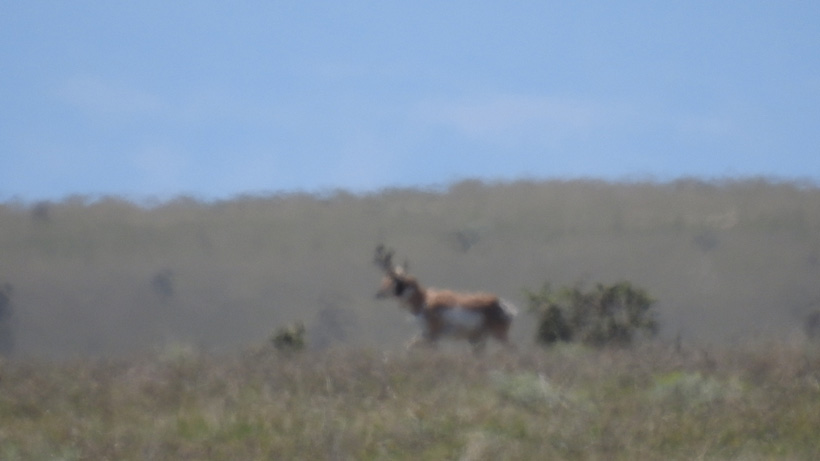 We definitely wanted to get a better look at this guy once it was time for the hunt. 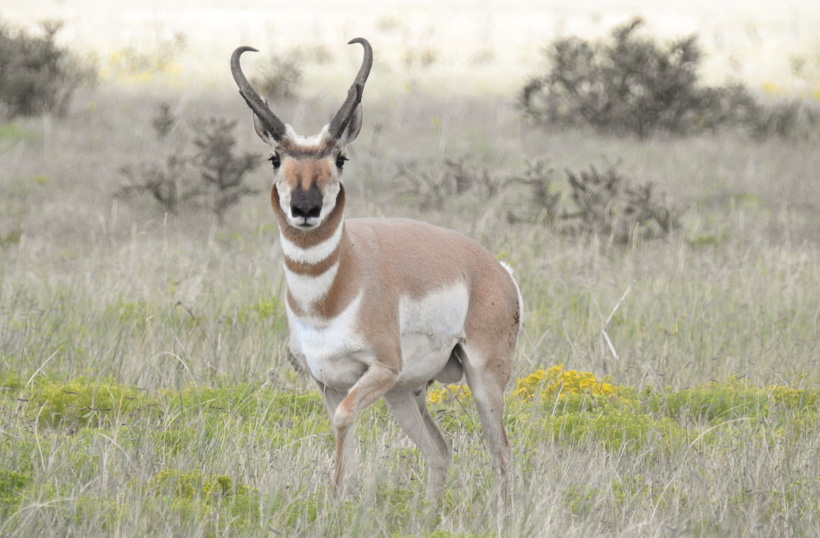 Another buck we found while scouting. He was very photogenic! 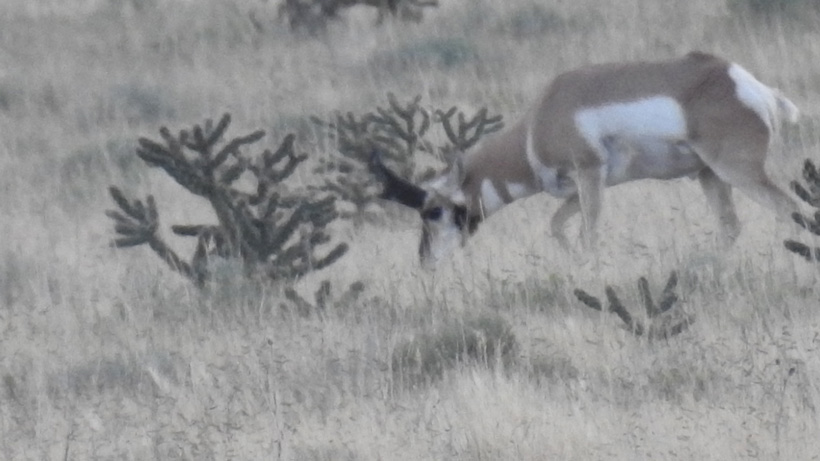 Just one of the many bucks that our scouting adventure produced. 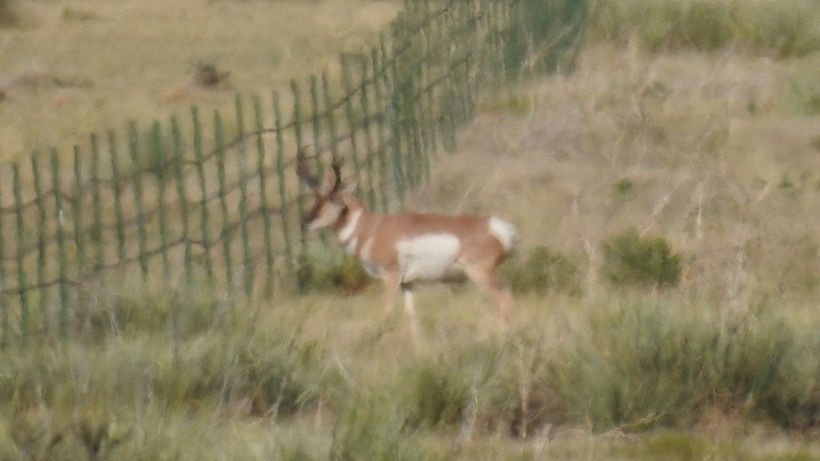 This is a photo of the actual buck I harvested just over a month later. Although he was in the general area of this location, he had moved onto predominantly private land until the day he made a mistake and ventured back onto the Comanche National Grassland! 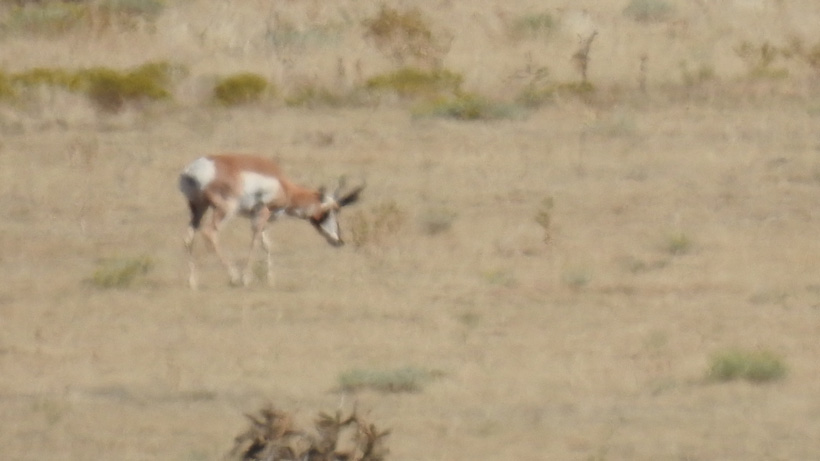 Many of the scouting photos are blurry due to the August heat and the far distances because getting close seemed to be a daunting task.

Scouting proved to be very successful and the trip back to Oklahoma had Michael and I beyond excited and full of confidence that once the season opened on Oct. 1, we would have very good odds in harvesting our first ever antelope and first game species outside of our home state of Oklahoma.

On the morning of Sept. 30, Michael and I finished loading up the pickup and began our journey toward Kim, CO. After stopping for lunch and groceries on our way, we finished our six hour drive, arriving just after dark. When we left Oklahoma, our confidence, and excitement was through the roof, but once we arrived to the area where we had planned on camping and saw camper trailer after camper trailer parked where we wanted to be, our hopes and confidence were quickly replaced by doubt and fear that we would be eating “tag soup.”

Nonetheless, we remained optimistic about our chances and excited at the opportunity that awaited us the following morning.

Opening morning came quickly after setting up camp the night before. We woke up with lots of excitement; this dream that we had hoped for was, finally, a reality. Just before daylight, we walked a couple hundred yards from camp to look off into a big bottom where we had spotted a group of antelope during our scouting trip. As it continued to get lighter, we were able to locate a good buck on public land and began slowly making our stalk toward him. As we zigzagged from Cholla plant to Cholla plant, we were finally in position but had to wait until legal shooting light to arrive. As luck would have it, a vehicle came barreling down the two-track road right toward the buck. The hunters jumped out of their vehicle trying to get a shot off before the buck was able to run back onto private property. Luckily, for the buck, he was able to make it across the fence before they were able to get off a shot. Once again, we were brought back down to the reality of hunting public land. While a little angry and confused as to why somebody would try to hunt like that, we remained hopeful and continued to look for antelope prior to making our way back to camp. 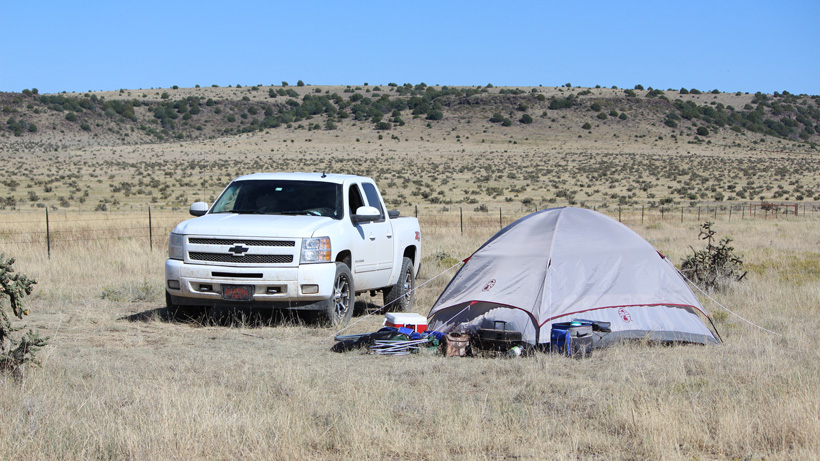 This is what we called “home” for the next week.

The remainder of day one included a lot of driving around and glassing other areas of public land. Unfortunately, for us, we were not the only ones with this strategy because it seemed there was enough orange covered bodies out in the fields and on the roads to fill up a Denver Broncos football stadium!

This day started off the same way as day one with Michael and I again spotting antelope close to our camp only to have them scared off of public land by the same group of hunters as the morning before, prior to legal shooting time. Day two ended with a few failed stalk attempts or stalks that resulted in finding bucks that were a little too small for what we were looking for this early in the hunt.

Days three and four resulted in doing a lot of glassing but not being able to find any good bucks or bucks of any kind on public land for that matter. They seemed to understand how the game was played and they were playing it at a much higher level than we were able to achieve.

The fifth day was a different story, though. Michael and I decided to switch tactics and, instead of hunting together, we decided to split up and hunt different areas to increase our odds of seeing some bucks. I headed to an area where the previous evening right before dusk we were able to locate a good buck on public land about a mile off the county road. I watched the buck and his herd of 23 does all day. Unfortunately, they stayed just on the other side of the fence on private land until right at last shooting light when they crossed onto public land too far away for a shot. After glassing this buck all day, I knew he was the one I was after. All I needed was a little luck on my side.

The sixth day started the same as day five, but, around 10 a.m., Michael called and told me that he was able to harvest a smaller buck. He was more than happy not to be eating “tag soup.” I went back and met up with him to help pack the antelope out and to take some photos of him and his buck. 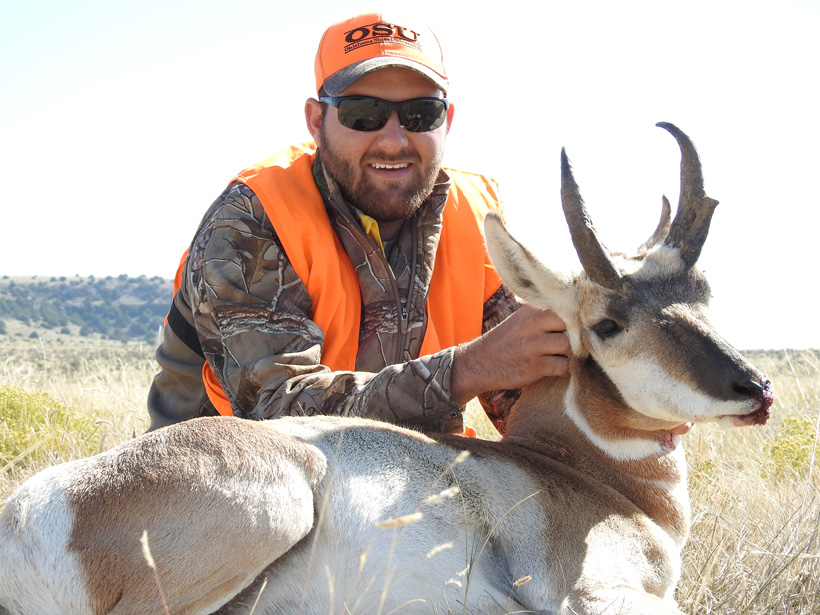 My hunting partner, Michael Hollie, with his 2016 Colorado antelope: his first antelope.

After helping Michael with his antelope, I headed back to the area I had been hunting earlier that morning. I quickly located the group of does—only this time the buck I was after was no longer with them. I watched them for about two hours and sat there confused and thought to myself that maybe the buck left and went to water. Knowing where the two closest watering holes were, I headed toward the closest one. When I was about half way there, I looked up and saw the buck standing approximately 300 yards from me. Unfortunately, he saw me first and took off in the opposite direction. I got my rifle set up just in time as he stopped broadside and I was able to get a quick range on him at 550 yards. Knowing this was a long shot, but also having the confidence in my ability, I looked through my Vortex Viper 6-24x50 and squeezed the trigger on my Savage LRP 6.5 Creedmoor. The gun went off and I watched the buck spin in a circle and run about 30 yards before falling over. The amount of emotions that came over me in that moment are inexpressible. Hard work does pay off! 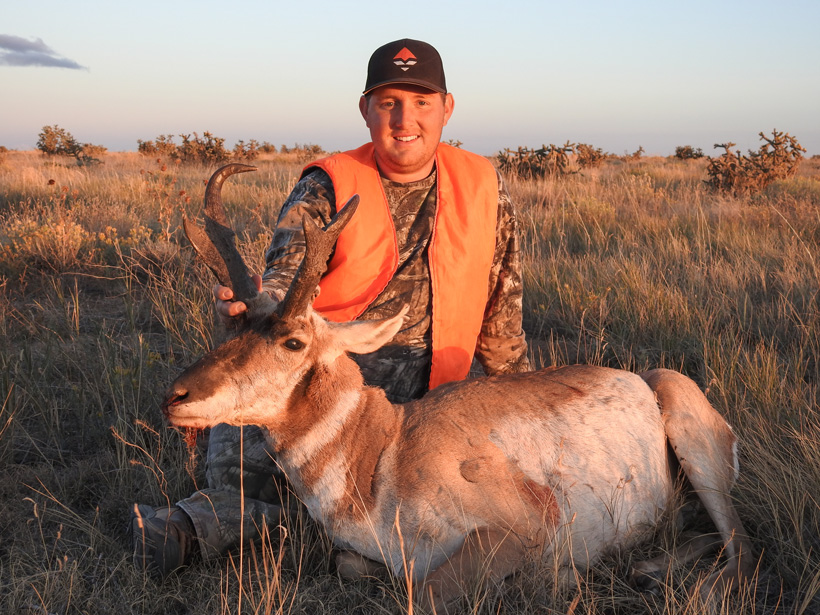 Michael headed over and we took some photos. We then loaded up and headed back to pack up camp because we were more than ready to be headed home. 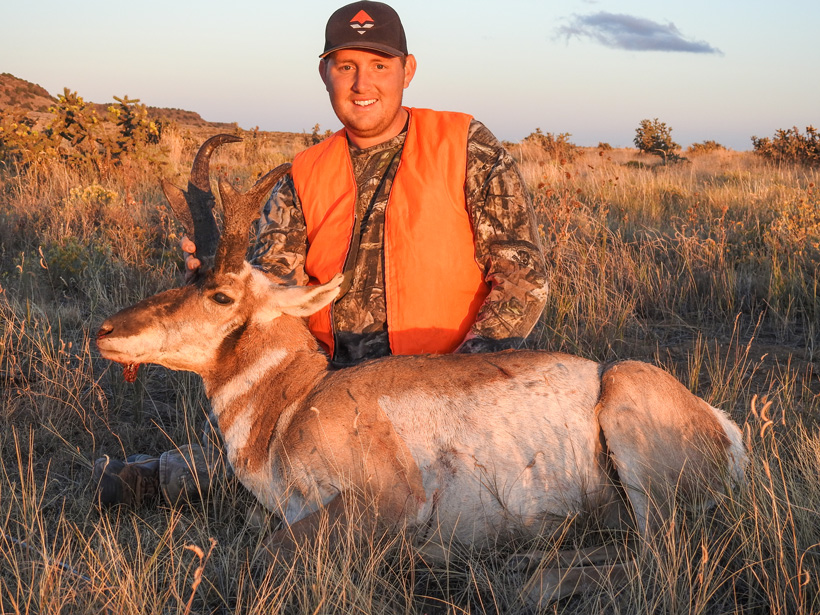 I couldn't be happier with my 2016 Colorado speedgoat! This buck has an unofficial score of 77 2/8”.

On our trip back home, we reflected on the highs and the lows of the whole experience, both agreeing that although it was a hard hunt, we will definitely be making more trips “Out West.”

While reflecting on this hunt, I can’t help but think back at how many times I was ready to call it quits. Instead, I kept reminding myself of the motto I live by: “You reap what you sow.” Hard work and determination always pays off in the end.

A one shot antelope kill shot at 550 yards says much about your hunting skill set.

Great story. Those are some awesome bucks and that sounds like a fantastic hunt. Congrats.