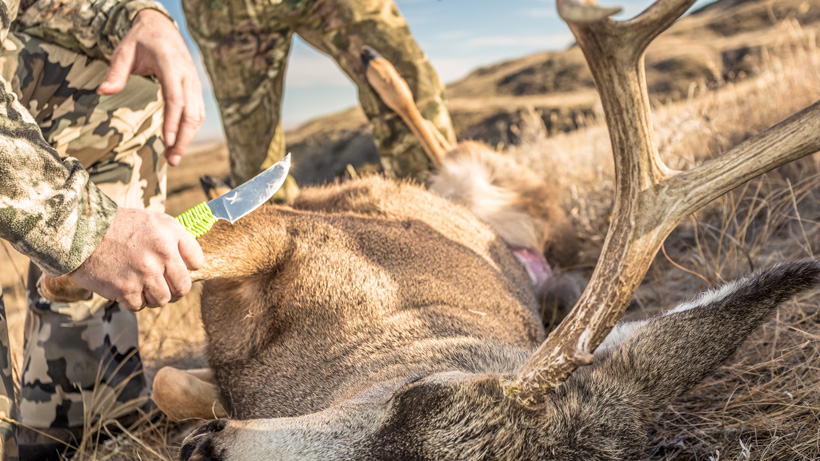 It all started in April of 2012. My dad called me for some insight into applying for a nonresident tag in Montana. At the time, I had been living in Montana for eight years and my dad wanted to join me out west to hunt mule deer. It wasn’t long before we had some information nailed down. There was just one small detail: his friend, Steve King, wanted to join us. To be honest, I didn’t know what I was getting into with more people joining us on the hunt.

Yet, after a few hours of talking on the phone with Steve (those southern guys can talk), I knew it was going to be a hunt filled with a lot of laughs. Steve was from Virginia and grew up chasing eastern whitetails; this was going to be his first Western hunt. After filling his head full of gear and rifle suggestions, and how we were going to hunt, Steve was ready to apply.

Steve was used to hunting deer from a treestand and his view of deer hunting was going to change in a big way once he stepped foot in Montana. What follws is the blueprint to the path of his his Western hunting addiction. 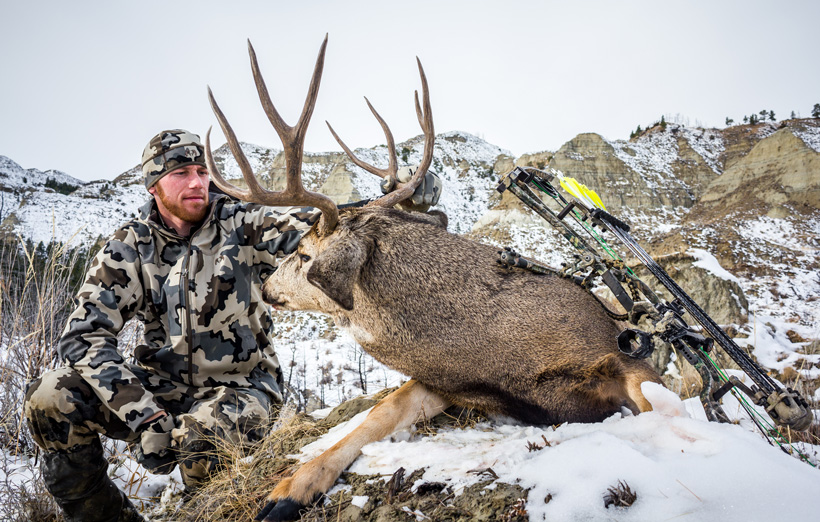 November finally arrived. I had just finished a week of bowhunting by myself before everyone joined up with me. I took a great buck with my bow and the story of my hunt made all of them eager to get started. 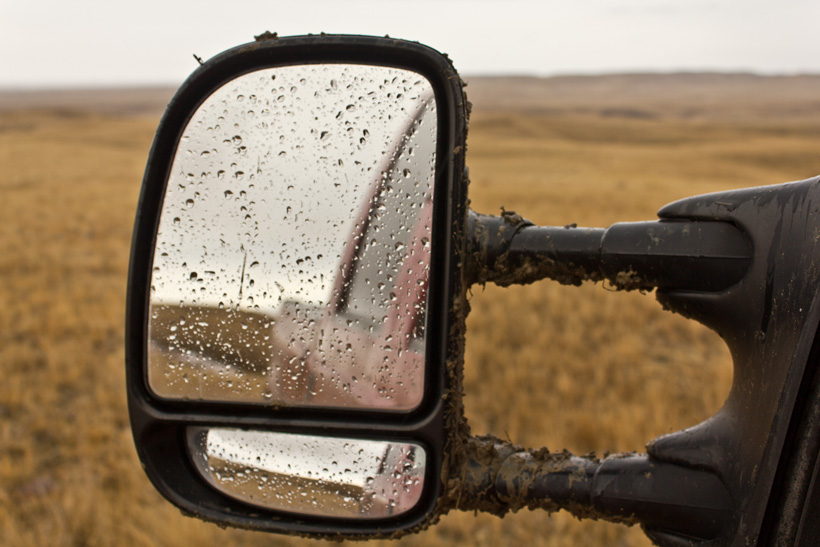 The hunt started off with warm weather and lots of rain. Weather like this in this area makes traveling around very difficult. 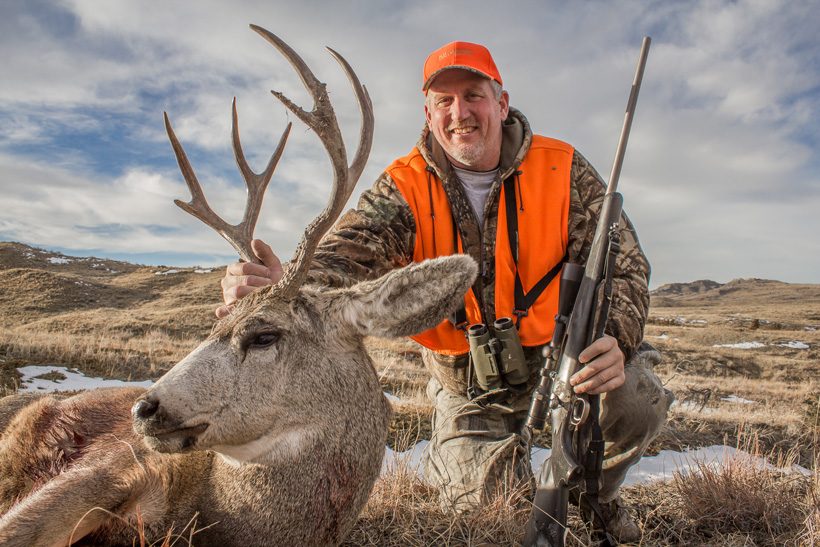 My dad took the first buck, which I will admit that — in the heat of the moment — we shot the wrong deer. After taking care of my dad’s deer and packing it to the truck, we had a little problem on our hands. It had rained a lot recently and the roads were battling against us. To make a long story short, it was a long night of gathering random tree branches and sagebrush to add some traction to the two-track road so we could slowly climb our way out of the hills. 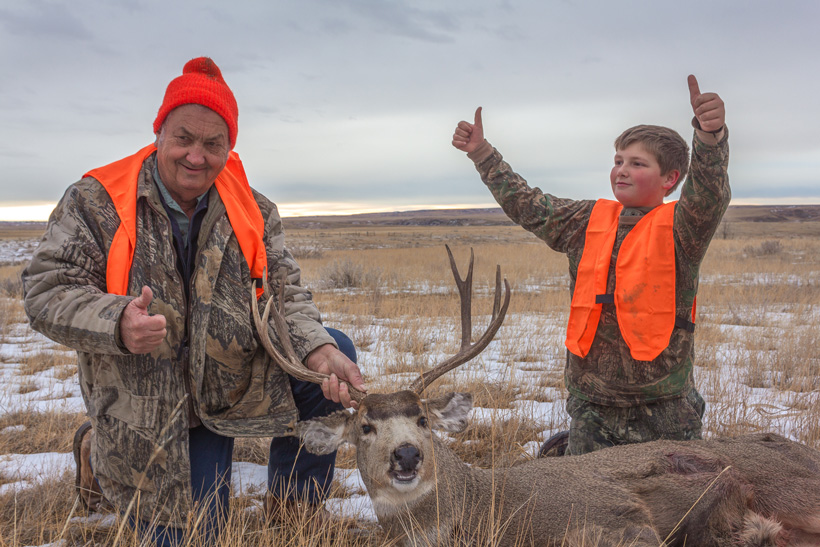 Over the next few days we managed to find a good buck for Steve’s dad, Jerry, to take. This was Jerry’s biggest buck and first mule deer ever. 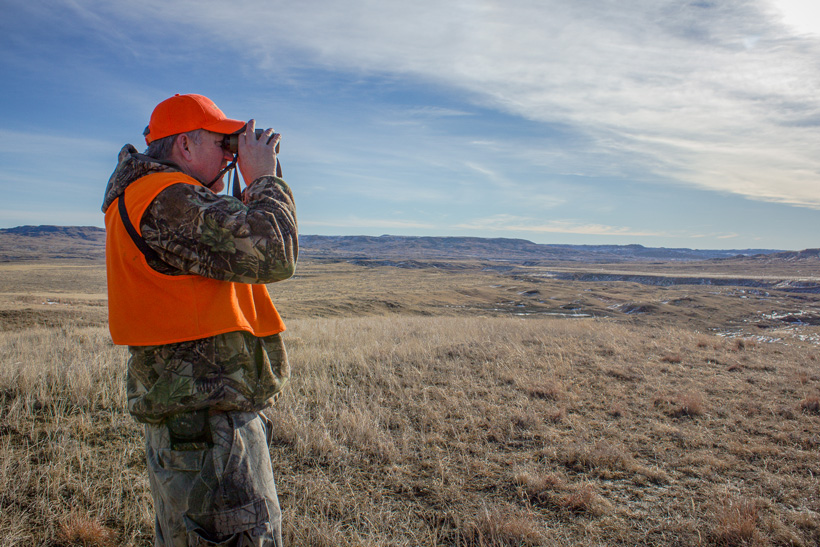 Earlier in the hunt, Steve had a few rough days. He had one afternoon where he was seconds away from throwing his rifle down a canyon after missing a great opportunity at a really nice 4x4 buck that was the biggest we had seen on the trip. A few quick words by me convinced him that we would find another deer. So the rifle was saved from a ride down the canyon. He was due to have some luck on his side. 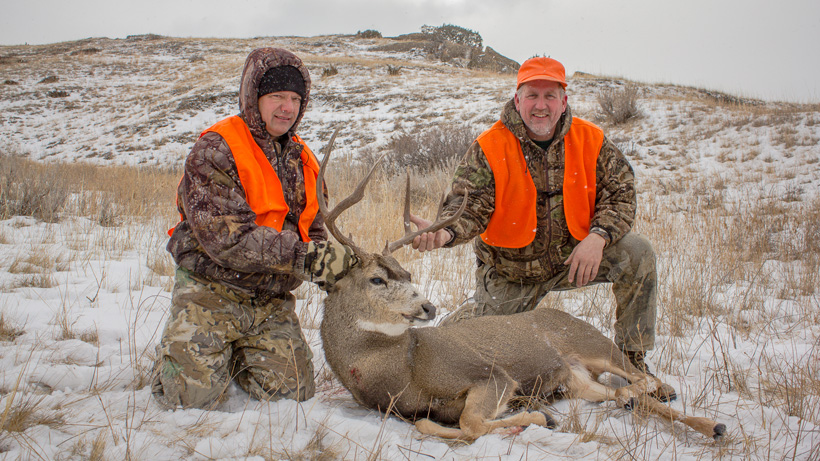 It was now the last day of the hunt and one of the coldest days we had. The wind was blowing hard from the north and it was snowing, which made sitting on a hillside glassing very difficult. After moving locations several times, we found a buck that Steve wanted to go after. The rut was in full swing and we watched as this buck got his share of doe action. Hunting Montana during the rut is a special thing. After a few other misses, Steve finally had his buck. We celebrated, took a bunch of photos and then the work began. 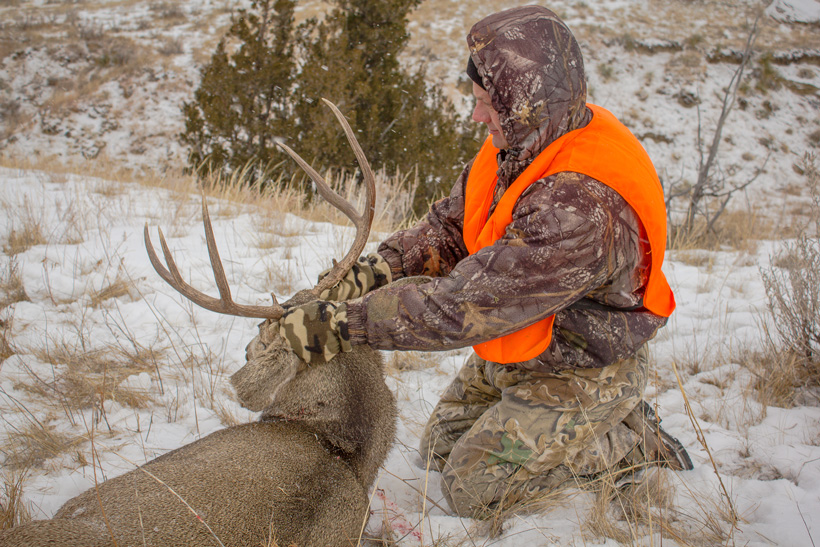 I wish I had some photos of Steve’s face as I told him we were going to quarter and pack this buck back to the truck. We had what I called a small hill with a steep section at the end to climb in front of us. Steve called it a gigantic mountain. When we finally got back to the truck, I had a full smile on my face and it was then that I think it clicked in Steve’s head; even through the pain of packing out a buck, he was now addicted and couldn’t wait until the next trip.

The 2013 application season had arrived. Once again, my dad gave me a call before the nonresident applications were due. Unfortunately, this year, Steve couldn’t make it due to his son starting to play more competitive basketball at school. Even though Steve couldn't join us this year, I still feel like this year adds to the overall story of why he got addicted to hunting out West. 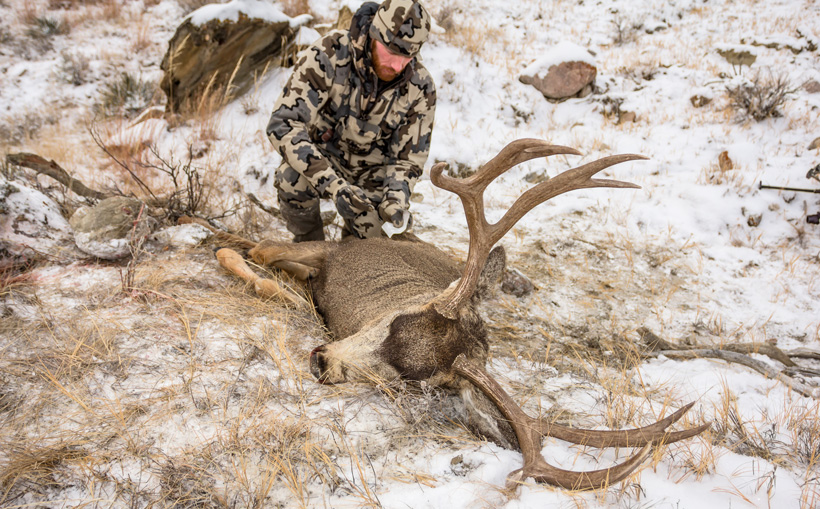 The summer flew by and November was finally here. Like before, I made my annual trip to bowhunt mule deer in the rut. This year, the weather turned for the worst. Brutally cold temperatures plagued my entire week, but after playing cat and mouse with a buck I watched for five days, I finally made a well executed shot and took my largest Montana buck to date. 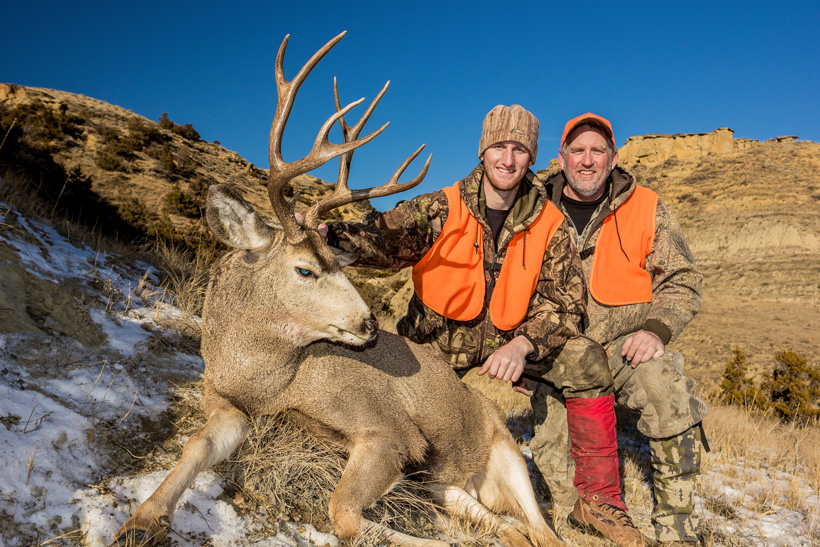 This was my brother Bryce’s first year hunting mule deer. After passing up numberous bucks, my brother set his sights on a good looking buck on day five of the hunt. 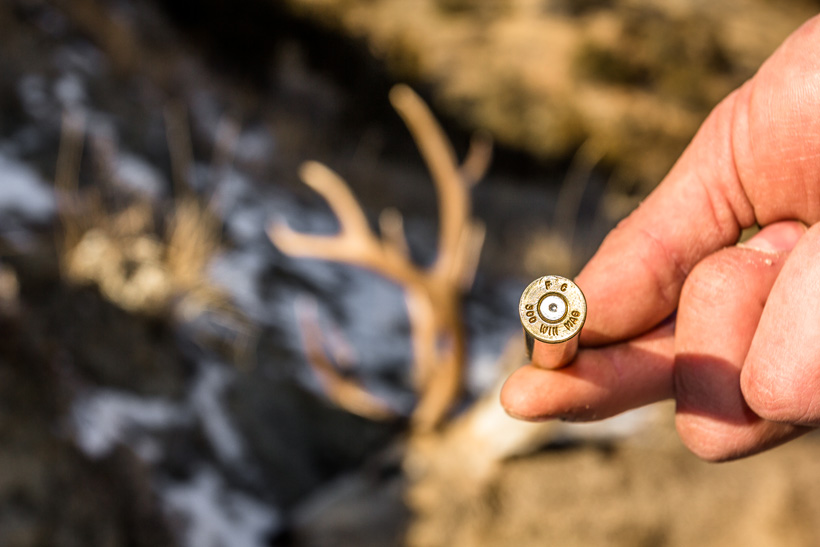 Like Steve, my brother was now hooked on hunting mule deer.

Another winter went by and the 2014 application season was upon us. This time, Steve was incredibly anxious to get back out west to hunt. Steve’s son, Bubba, was finally old enough to hunt big game in Montana and would also be joining us. We had a lot of work ahead of us with four buck tags in our group. Like clockwork, November was here and we were on the road.

This year, Steve knew what to expect and made a few gear changes. Mainly, he upgraded his weapon choice to one that was more friendly for longer distances and able to handle the wind. 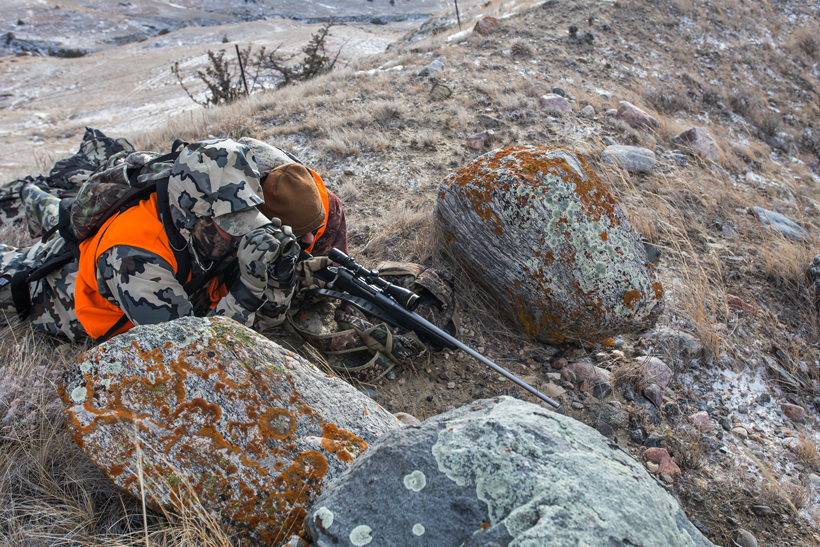 We didn’t waste any time on this hunt and found a good buck early one morning. After watching the buck push around a bunch of does, they bedded in the perfect spot for a stalk. The buck and eight does bedded below a steep cliff, which was perfect for an approach from behind. We made the long stalk and slipped out of sight. We got around the buck and climbed the steep ridge behind him. The winds were blowing extremely hard, forcing us to get close. After crawling over the ledge far enough so we could see the bedded herd, Steve carefully took a shot at 120 yards. 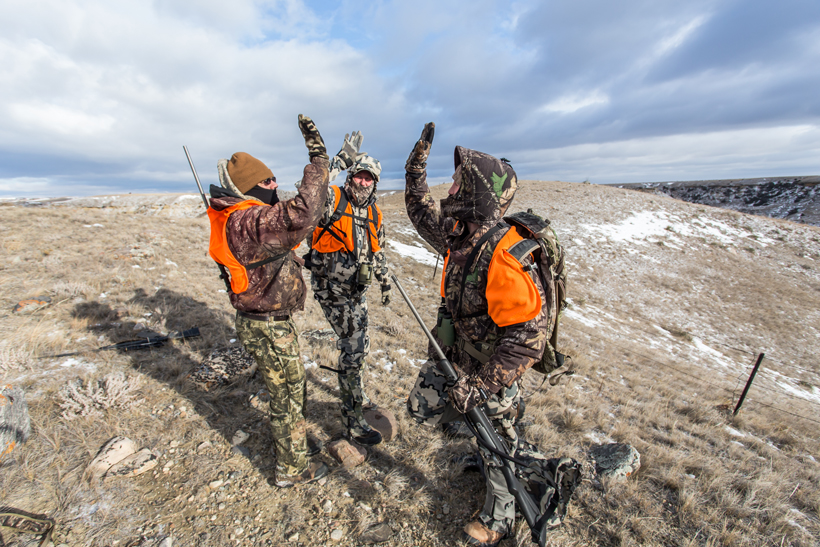 We had around of high fives and went down the cliff to get Steve’s buck. 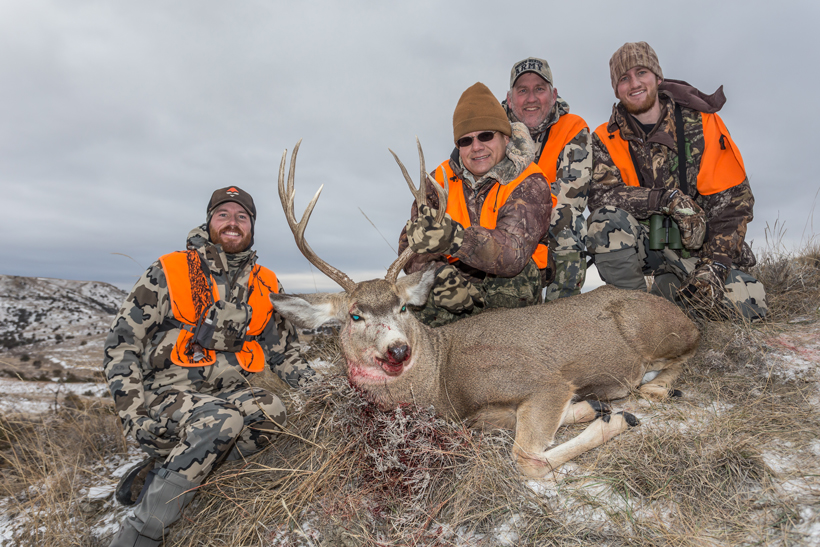 Nothing like great friends and rutting mule deer. Just like that he had his second ever mule deer. 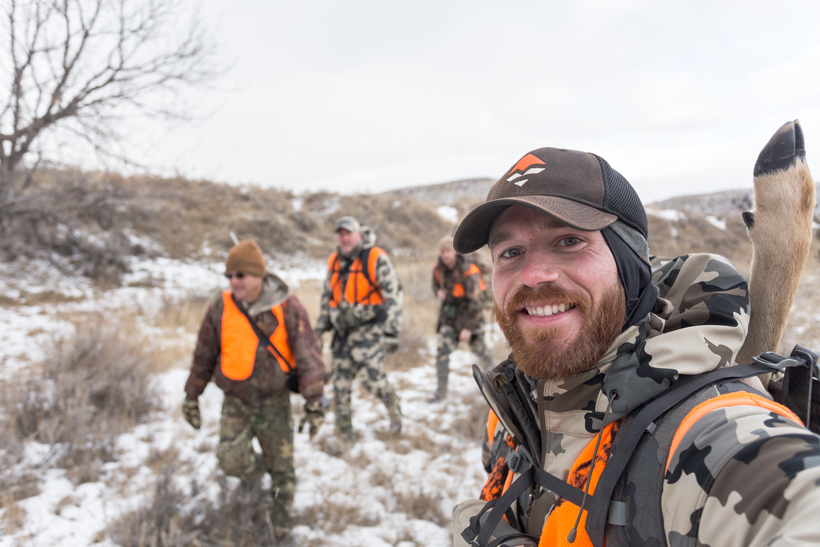 We had a great rest of the week on that hunt. My brother and Bubba both tagged out on bucks. 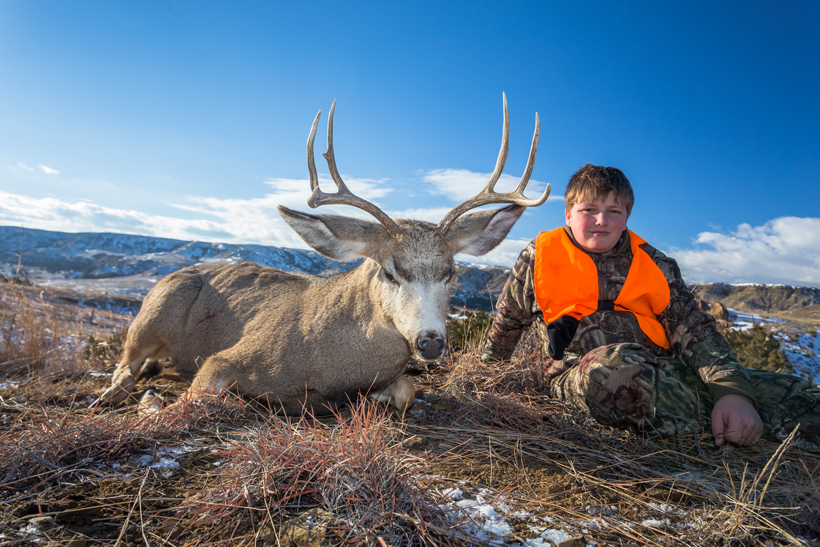 Bubba's first mule deer buck. He was all smiles as we made our way over to his deer. He passed up a buck earlier that morning because he wanted a larger deer so I would proud of him. Either way I would have been happy for him, but I couldn't help having a large smile on my face after I heard that. 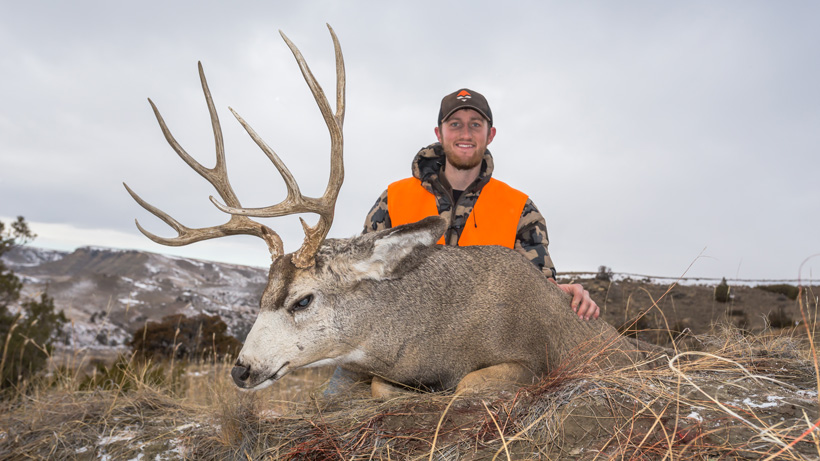 Here is Bryce with his giant Montana buck.

My dad elected to pass on several bucks and head home with a tag left unpunched. He’s the type of hunter who is happy just being on the hunt and seeing others take bucks plus he has a large room full of great mule deer and whitetails.

That was another end to a fantastic week of hunting with my family along with Steve and his son, Bubba. After his second year of chasing mule deer, Steve was already talking about returning next year and not taking a season off. You can read more about this hunt on a previous HUNT story here. 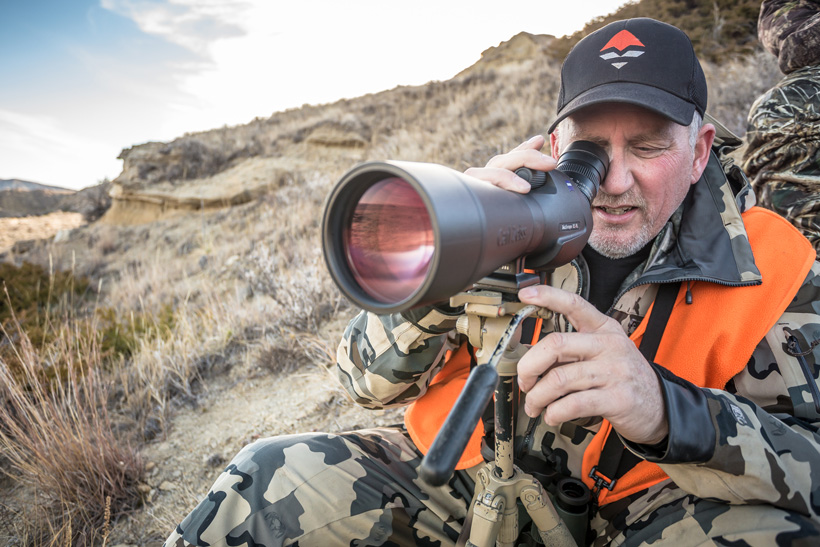 Fall rolled around and soon we were heading off toward the start of our annual hunt. It was now day two of the hunt. We hunted hard all morning, trying to find the buck that slipped by us the night before. At one point, we made a long stalk on a buck that we thought was the big one only to find out that the distance we spotted him at and the sun waves through the optics deceived us. 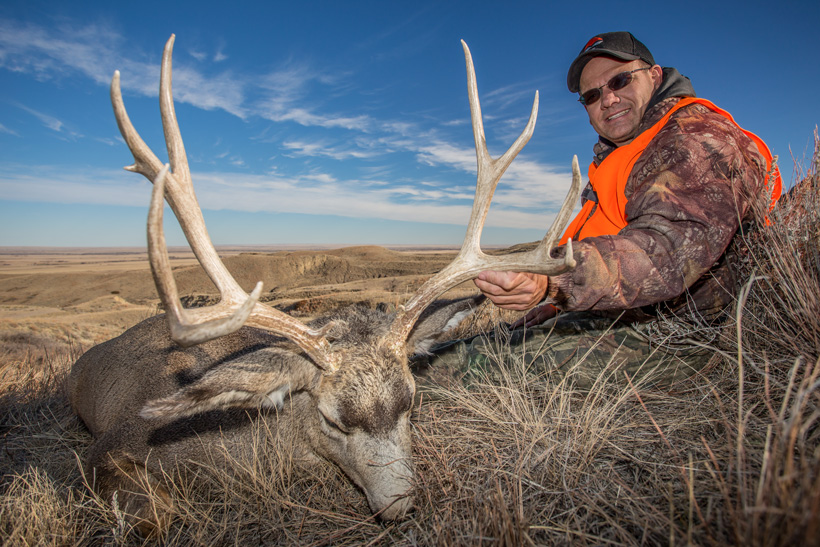 Around 11:30 a.m., we finally found the buck from the night before and Steve made a perfect shot at a great Montana buck. 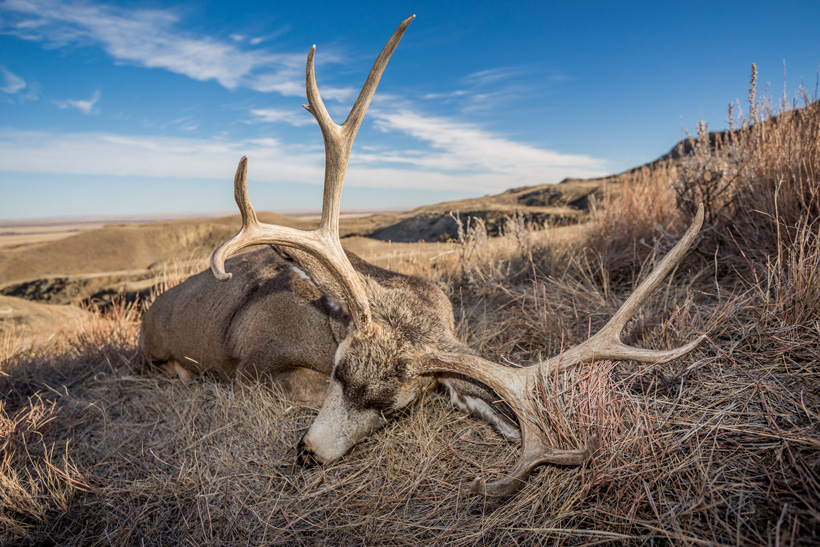 This is Steve’s largest mule deer to date and is a great 4x4 with eye guards and matching small kickers off of each side. Nothing makes me happier than helping others take deer. 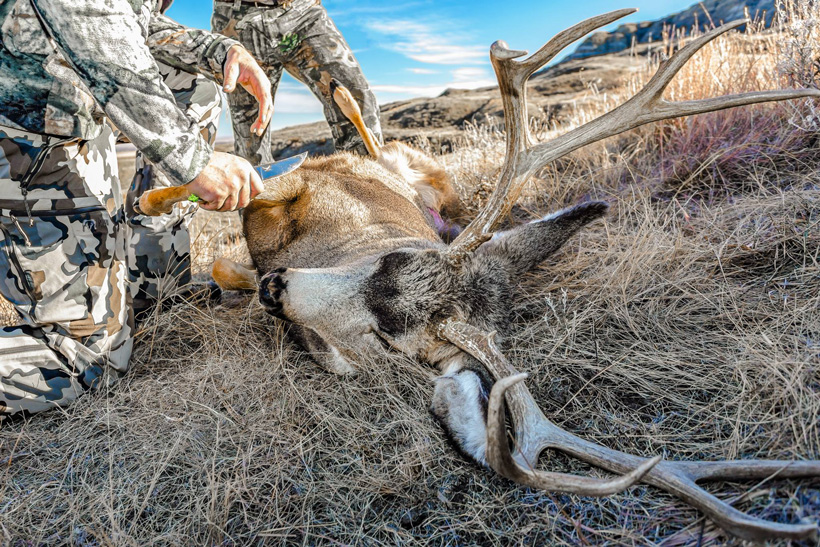 We soaked up the moment, took a bunch of photos and then began to quarter the buck to get it back to the truck. Without great friends and family, memories like this wouldn’t be possible.

We all shared the load of meat, which was great because we had a giant cliff area to climb up. Steve laughed because he was now getting used to hunting with me. He knows that when we leave in the morning, there is a good chance we will end up in some remote and nasty country. 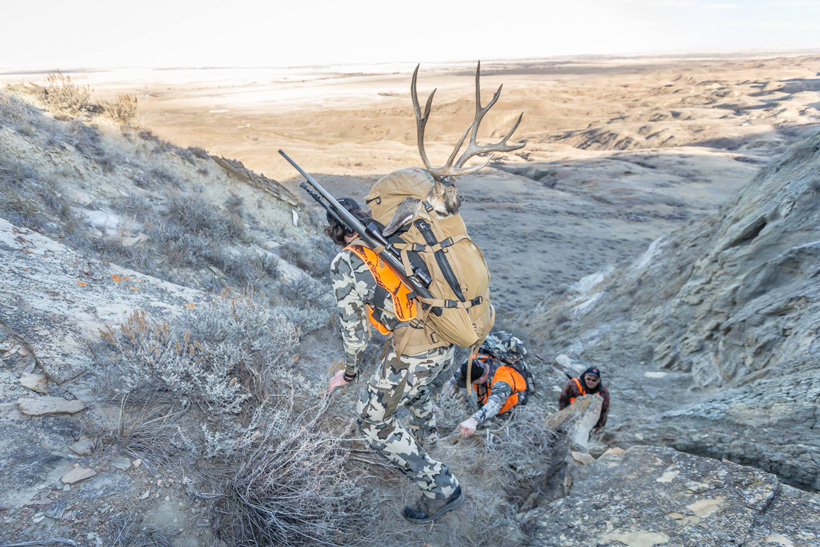 I was very happy to help pack out this buck from the bottom of that canyon for him. 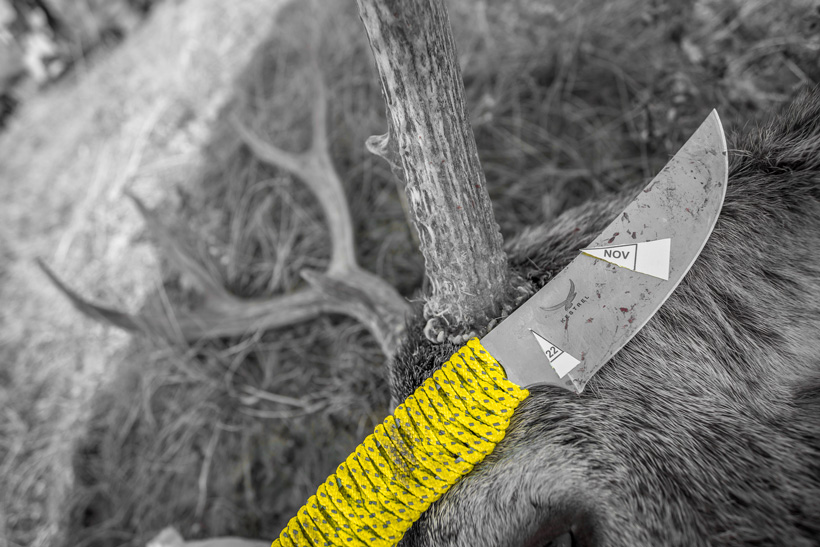 The rest of the week was one to remember, but I’ll save that for another time.

I’ve now hunted with Steve for three years. Every year he has taken a bigger buck and each year his addiction to Western hunting has grown. These trips mean so much more than bucks on the wall or meat in the freezer. I first met this guy in 2012 and since then I’m not sure I’ve ever laughed so hard while hunting. 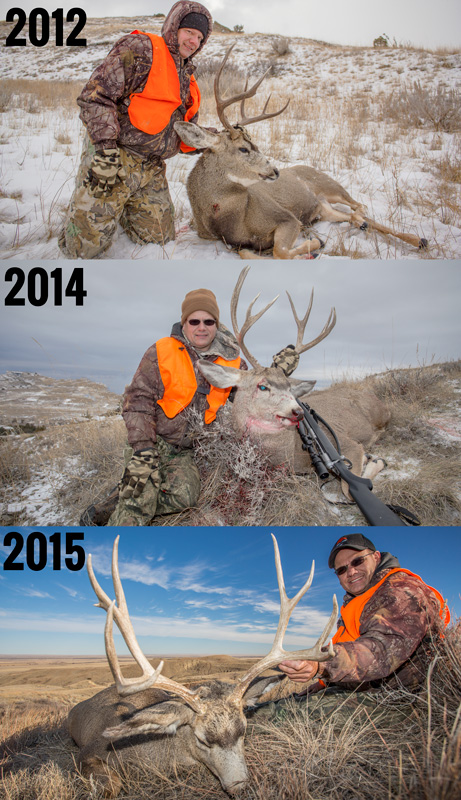 These southern guys not only love to hunt, but they also know how to make a hunt very memorable. Their food choices while hunting may seem a little odd to me — like potted meat, Spam, Vienna sausages, or pig that they call scrapple — but I wouldn’t trade their company for the world. What started out as a random hunt has now turned into an annual tradition.

With any luck we will be creating more memories this fall because we all drew nonresident tags again in Montana. It’s always a blast hunting with you, Steve. I can’t wait to hunt with you again this fall.