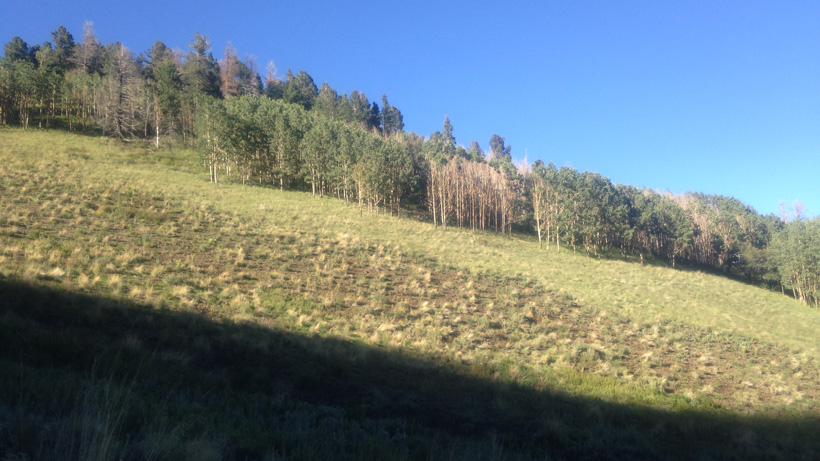 My name is Aaron Purdy and I am 36 years old. How appropriate that I drew a Unit 36 archery elk tag in New Mexico. I have been an avid hunter since I can remember, introduced to the outdoors by my father at a young age. I’m from Texas, which means that I mainly hunt whitetails and hogs and have been successful archery hunting over the years. In 2014, I went on my first archery elk hunt in Colorado with an over-the-counter (OTC) tag with my good friends, Bruce Palmer and Joe Sledge. Although we were not successful in harvesting an elk, I was hooked and ready to embark on my quest for the west. Chasing mountain animals with my bow soon became an obsession.

I envy those who live in the mountain states. In Wyoming, I participated in a 2015 do-it-yourself (DIY) archery elk hunt and, although it was one of the hardest things I had ever done both physically and mentally, I learned priceless lessons about elk hunting, elk behavior, tactics and strategies. While I had good opportunities, since I was archery elk hunting, many things need to occur in order to succeed. Fast forward to spring of 2016, where I learned I had drawn a tag for Unit 36 in New Mexico. It was game on from that point: preparing, training, shooting, hiking with weighted packs, and getting mentally prepared to hunt a great unit.

I was profoundly fortunate in this draw for several reasons. Being in Texas, the trip to the Ruidoso area was relatively close (only a seven hour drive). By comparison, traveling to other units in other states would take up substantial time from hunting/scouting. Also, my parents have a condo in the Ruidoso area, which meant that we could utilize their accommodations and hospitality. It also enabled my father, Bruce Purdy, to be able to enjoy and partake in my adventure. Being able to experience this hunt with my father was so rewarding and satisfying—it’s difficult to put it into words. Time is precious and spending any amount of time with him is priceless, but to be able to include him in my hunt is something I will always cherish. In addition, because I was close to New Mexico, my good friends, Joe Sledge and Bruce Palmer, were to be able to take some time off to assist me in my hunting efforts.

I should mention that I drew this tag in the guided draw outfitter pool, utilizing the two day minimum guided option. My good friend, Bruce Palmer, recommended JFW Outfitters, a goHUNT Business Member and after I drew the tag I was introduced to Joel Beer, who was familiar with the area and the guide for my hunt. I prefer a DIY approach, but with the drawing odds being what they were, I figured my best approach was to get into the guided pool of draw odds and utilize the two day minimal guided option to maximize my success.

I took advantage of many resources for my scouting, including goHUNT.com’s INSIDER, which was one of the resources I used for gathering intel on my unit. The Unit Profile information available to their INSIDERs was very valuable and full of useful data. I also used Google Earth and OnXmaps for boundary information and GPS chip technology. I contacted local U.S. Bureau of Land Management (BLM) and forest service employees for information regarding where I could hunt and which areas were closed seasonally for camping purposes. 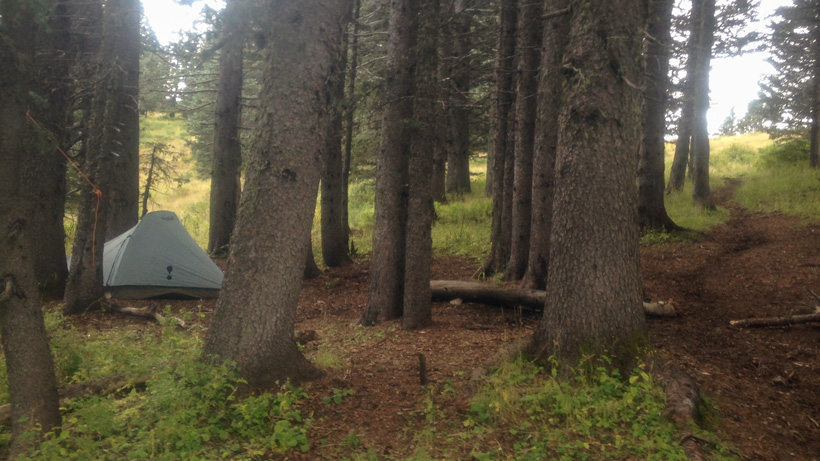 The season started Thursday Sept. 15. I left Graham, Texas on Tuesday afternoon and after resting that night, I set up my camps both high and low. One camp was high on the mountain and close to reservation land; another camp was low and close to some water. I had planned on hunting between the two camps during my week hunt, but plans obviously can change on a dime. 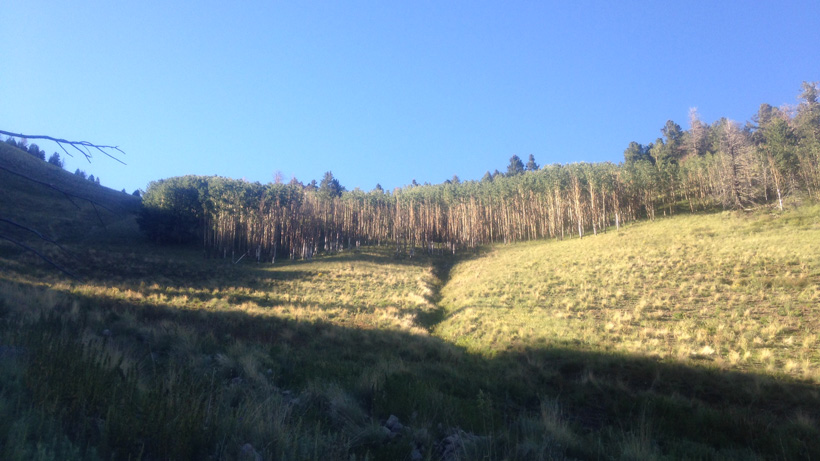 I started my hunt by hiking up onto a ridge and preparing to mainly just listen and get the lay of the land. That morning I was amazed at the amount of bugling and screaming that was going on down in the basin below me. It was insane! I am by no means an experienced elk hunter, but I do know that this bugling and screaming and vocalization of bulls was far from routine or normal. I had definitely found a special area. Deep, dark, steep, far from humans, and profoundly difficult to navigate. A huge fire burned this area four years ago, thus the sunshine pouring in after creating thick underbrush that was almost jungle-esque. A machete was needed. Needless to say, I was not prepared to venture down into the abyss on my first day. Instead, I backed out and made plans for day two into bull paradise, while still hunting a bit during my first day/afternoon. 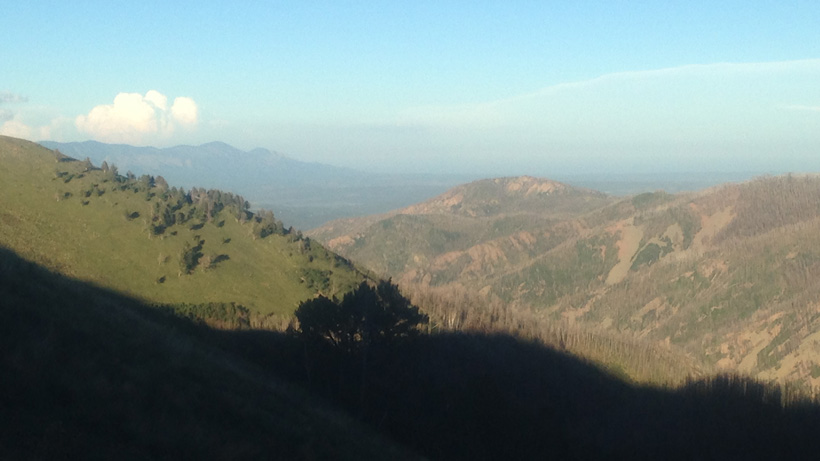 I began Friday, my second day, with a pleasant wake-up call from my wife. Cell service was surprisingly great during my hunt. I started hiking in the dark and had planned on hiking much further than I actually did. About a mile from camp, I found some elk down in a steep basin and I decided to make a play on them. I left my KUIU pack up top in the pines to minimize noise and increase stealth; this would end up being a mistake later, in my opinion. Eventually, I found myself buried in elk. This was steep nasty country and completely elk infested. I found myself basically going from bugle to bugle, sizing up bulls and passing on four bulls from 4x4 to 5x5’s. I was in the bottom of this steep basin when I blew a stalk on a 6x6 bull and I figured my morning was done after his bellowing bark. Around 11 a.m., I began to gather my thoughts and personal belongings to begin my ascent up the basin all while continuing to cow call with my diaphragm call. Just as I decided it was time to vacate the area, I realized a bugle I had been hearing was getting closer. Again, this was one of many bugles/bulls I had been hearing all morning. I hunkered down and waited in my natural ground blind created by fallen trees as a shooter bull began to come down into the bottom and basically stop broadside 20 yards away!

The wind was perfect for me, he couldn’t see me, I got down to my knees and released my arrow deep into his chest cavity, a perfect shot. I do not consider myself to be a great archer, but it would have been hard to screw up this perfect broadside 20 yard shot with all of my pins in his vitals. Fortunately, for me, it happened so quickly that I didn’t have time to panic and get elk fever. It seemed instinctual as the shot went off. He ran 50 to 60 yards and laid down as I tried to acknowledge what had just happened. It was truly epic. As I could hear him taking his last breath, I looked up and saw a bull up the hill from where he came from staring me down, turn and walk away. 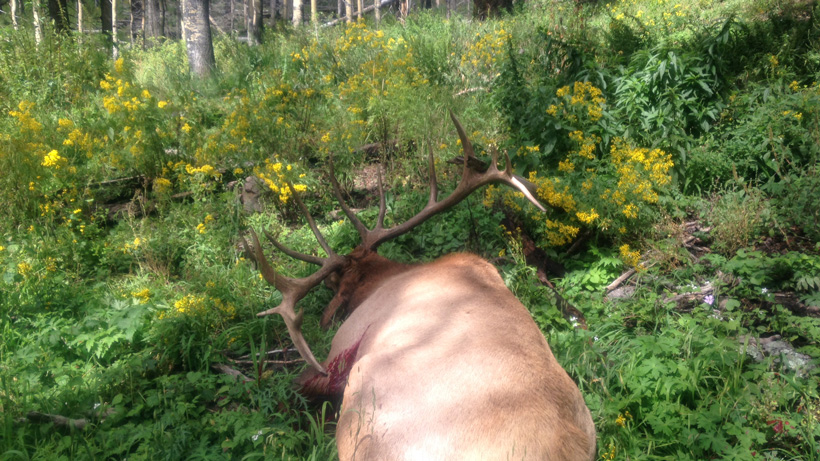 I had just shot a big bull. It was unbelievable. I didn’t know how big my bull was when I shot, just that he was a shooter. It was such an exciting and overwhelming experience to see him up close and realize he was huge, much bigger than I could have anticipated. 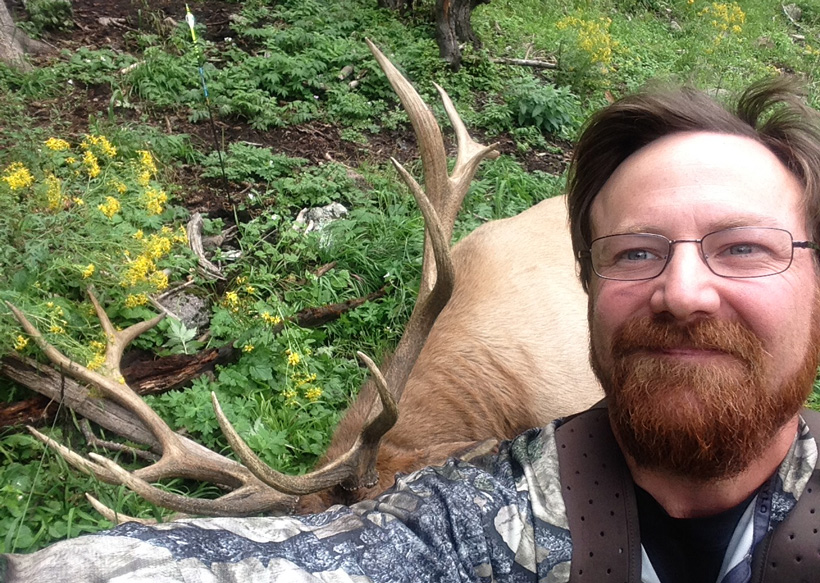 I called my father as I made my way to the bull. My dad was up on the ridge above scouting during this time. It was profound as I shared this experience with him, getting more and more excited as I was sizing up the bull on the phone with him. 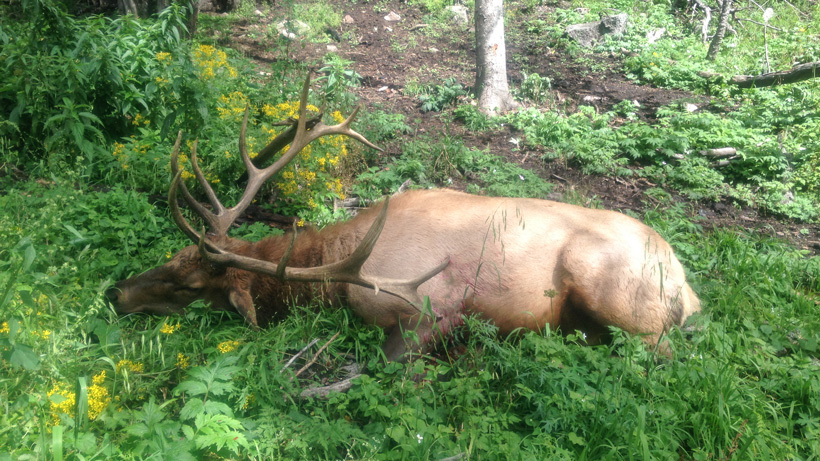 He was a true 7x7, enormous fronts and great width. After reflection and thinking about what I had accomplished, I began to realize that the hard work had only just begun. 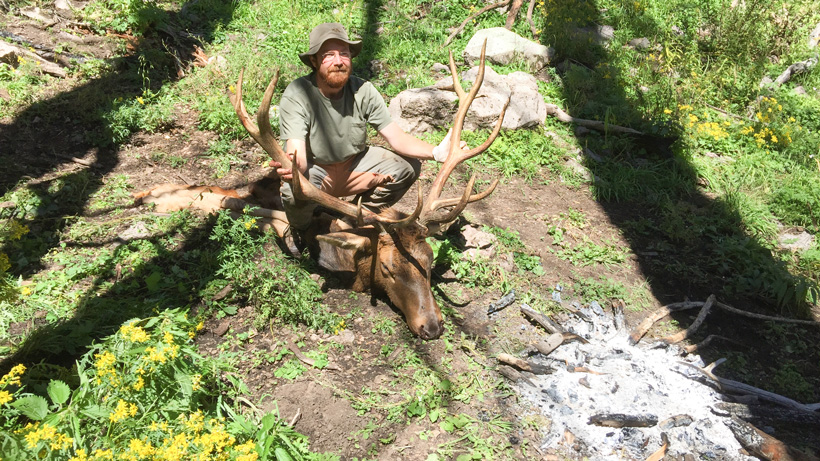 I hiked up the ridge to get my pack which had my knife and game bags. I met up with my father, hugged him, gave him my bow and hiked back down into the bottom to start quartering. I started the process at 3 p.m. This was my first attempt at taking apart an elk. I have seen many videos on the gutless method and thus proceeded in a stepwise approach. 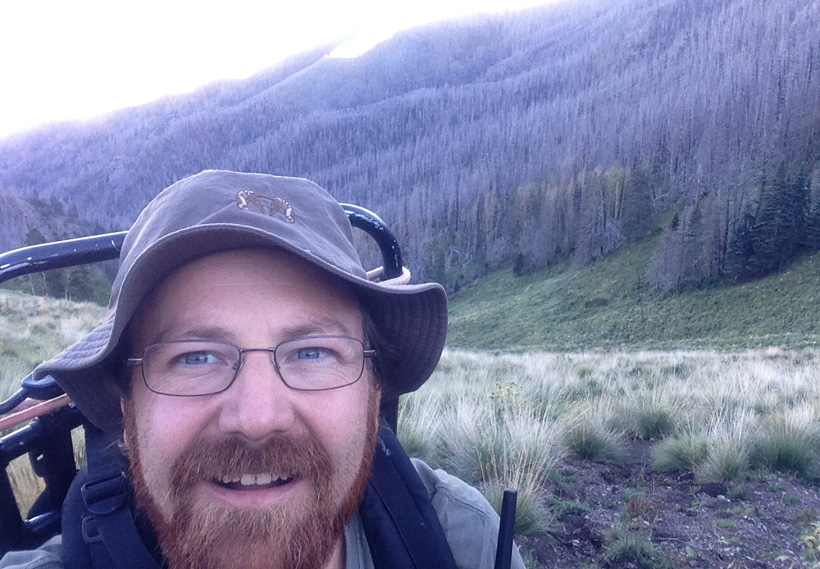 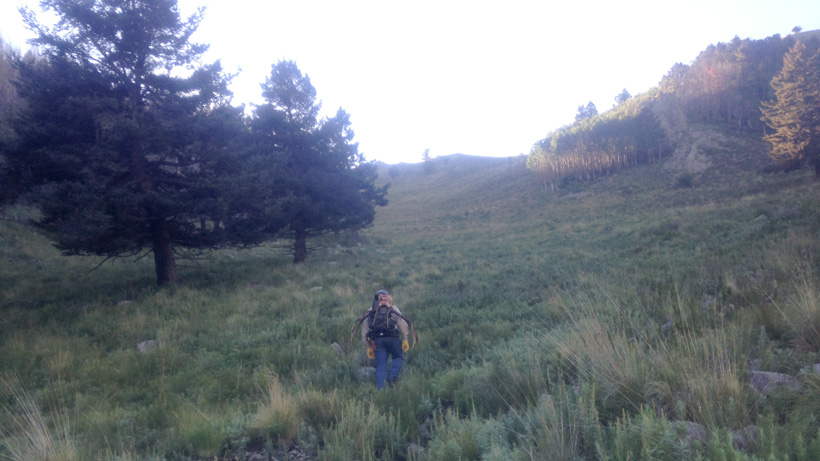 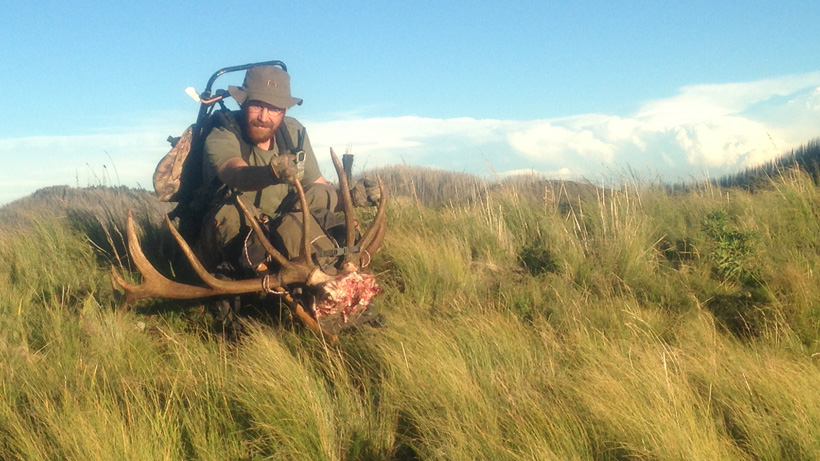 I hung up the quarters and backstraps and tenderloins in trees and left the basin tired and hungry at 9 p.m. I reached camp around 2 a.m. and got some rest for the 36 hour extraction ahead. After I shot the bull, I texted my friend Bruce Palmer of Wichita Falls, TX. He loaded up with Joe Sledge and drove throughout the night to arrive at the trailhead by daybreak. 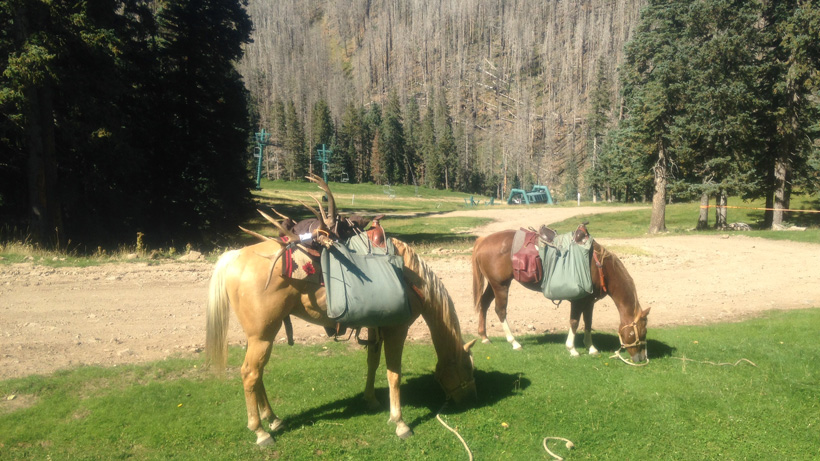 We went up with two Texas flatland horses and started getting the bull out early that afternoon. To say the extraction was difficult would be a huge understatement. My father, his friend Jim Helms, Bruce Palmer and Joe Sledge along with my guide, Joel Beer, assisted in this monumental task. I can’t thank them enough for their assistance. 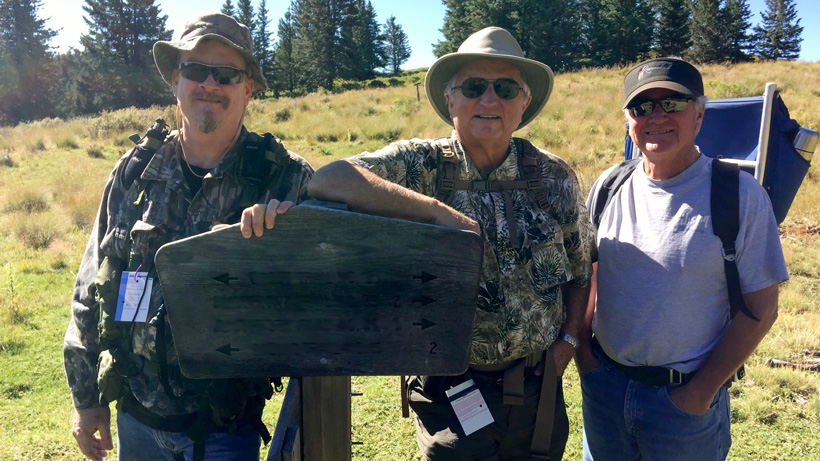 Great friendships and bonds were made on that adventure. So many things happened that I can’t properly describe the details in this condensed version for publishing. From nocturnal hypothermia and space blankets to horse rodeos and sore feet and aching backs, it was a trip full of memories and hardships. Jim suffered a broken finger after a fall, I fell and broke the quiver off my bow. The terrain was treacherous and I’m sure they might have been cursing me in their heads for shooting a bull in such rough and steep terrain. I again can’t thank these wonderful gentlemen for their heroic efforts. They truly are heroes to me for what they went through.

I shot the bull at 11 a.m. Friday and didn’t get it loaded into my truck until 5 p.m. Sunday. The meat was great and unspoiled; the hide survived. At times, we worried about the meat and hide, but lady luck was on our side. The rough scoring of the bull was 335". The official scoring after the drying period is still pending. Regardless of the score, it truly was an epic trip with memories to last a lifetime. 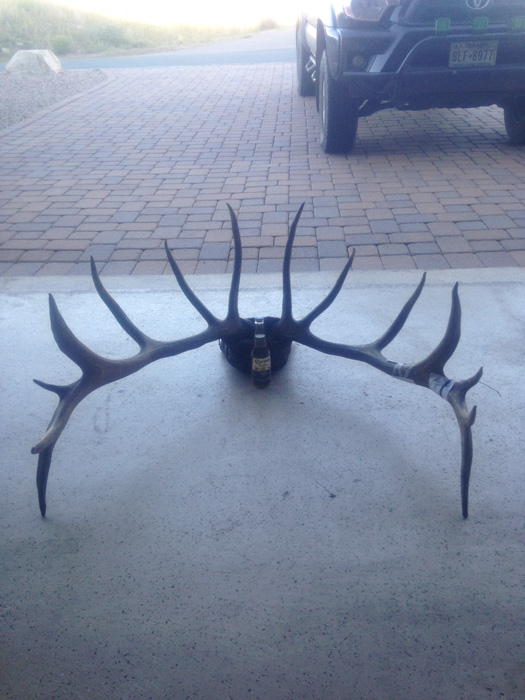 Chasing elk in the September rut is addicting and I am looking forward to my next adventure—after healing, of course.