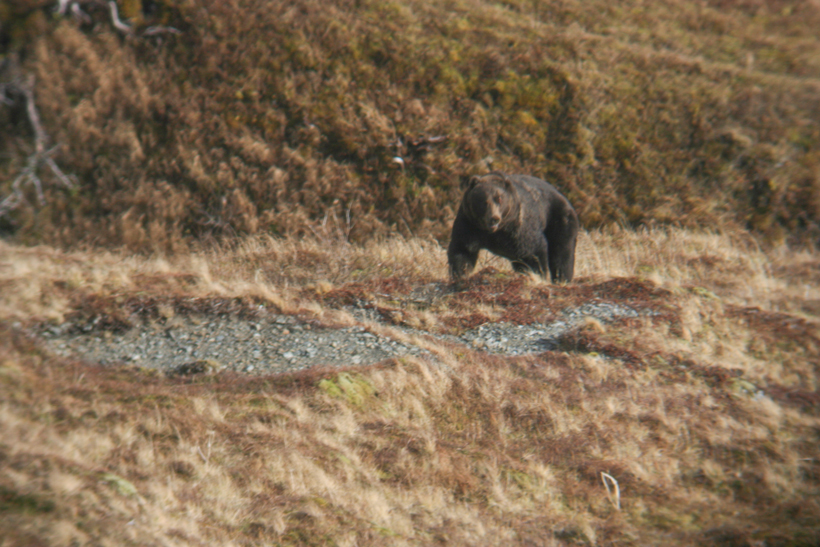 “Think we’ll see any Kodiak brown bears, Lorin?” I asked my good friend, Lorin Peterson.  We were sitting in the airport in Phoenix waiting to board a plane for Anchorage. It was 2004 and I was heading to Kodiak Island for a Sitka blacktail deer hunt with some friends. This was my very first trip to Alaska and I was full of anticipation. I had always fantasized about the giant bears that lived on the emerald island.

Lorin laughed and replied, “I doubt we’ll see a single bear on this trip so you don’t have to worry about being eaten!” He was a veteran to travelling around the world on exotic hunting trips while I had never hunted outside of the lower 48. During the trip, I was lucky to harvest a great blacktail deer, fox and sea ducks as well as pull crab pots and catch halibut. I even saw five brown bears on that trip, contrary to Lorin’s prediction. I was able to experience Kodiak Island enough to know that I would return one day. I just did not know when. 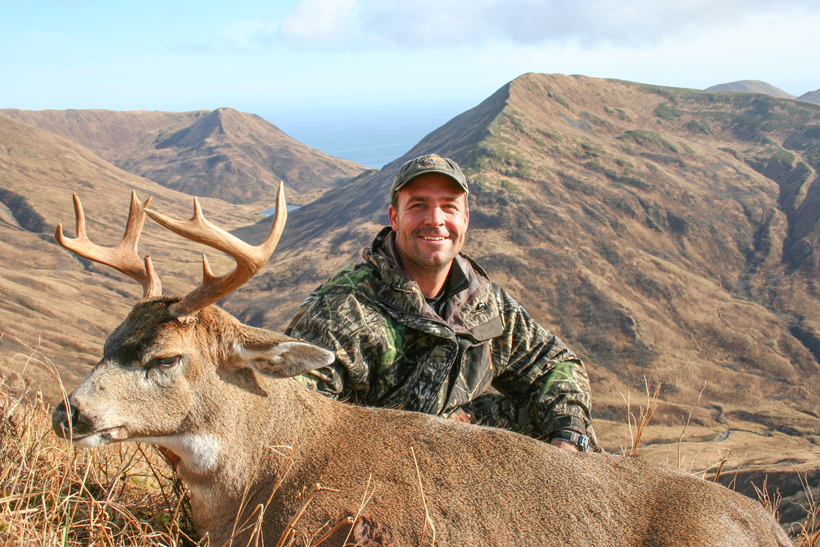 Dave’s Sitka blacktail that he harvested on his first trip to Kodiak two years before his bear hunt.

Lorin and I lived in the same town so we saw each other regularly and talked hunting more than our wives really wanted us to. We talked about our various adventures and he knew my interest in Kodiak — especially the brown bears that lived there. I knew the waiting list to book a brown bear hunt on Kodiak Island was long, and I was also aware that the cost would be more than I could probably ever handle, but I also knew that none of that really mattered. I wanted in. I wanted to hunt brown bears in Kodiak.

In 2005, Lorin headed back to Kodiak on a mountain goat hunt. He tagged out quickly and found himself sitting in the town of Kodiak for an extra day waiting for weather and a plane to take him home. While waiting, he learned through his mountain goat guide that a very reputable brown bear outfitter had a cancellation hunt for the coming spring of 2006. Lorin, being the kind of guy that really cannot sit still and loves to talk hunting, decided to bother Dick Rohrer of Rohrer’s Bear Camp that night. Little did I know that Lorin inviting himself into Dick Rohrer’s home would become my ticket to fulfilling a personal dream. Lorin returned to Arizona and told me that the spot was reserved for me, but I better be ready to go in six months.

I knew that I was going no matter what it took.

Six months seems like plenty of time to prepare for something, but I was heading on a dream hunt and did not want to overlook anything. I was able to talk with Dick Rohrer over the phone for the first time and he informed me of what to expect. Dick said that he has a comfortable camp with cabins and a cook and that they hunted out of Boston Whalers, glassing from the coast line or from small hills above the water. All of this sounded great to me! Then he went on and said, “But, Dave, one hunter will be flying into a remote location, camping in a dome tent, and climbing every day to glass. The food will not be like what we will eat at the cabin camp. Since you are far younger than the other guys, how does this sound for you?” Honestly. I was just happy to be headed on a brown bear hunt and told him that this sounded fine. Dick’s son, Sam Rohrer, would be my personal guide and camp buddy for my two week adventure. I could not wait!

Spring was upon us before I knew it and I was finally back on Kodiak Island. The weather was brutal and winter just did not want to loosen its grip that year. The lake I was supposed to land  on was still covered in ice! The only option available was to be dropped on the ocean. We had to hurry to unload the turbine beaver of our gear and supplies. It is hard to forget that feeling of standing on the dark grey beach in chest waders next to boxes of camp supplies and all of our hunting gear. We watched the plane battle the waves, finally lifting off and vanishing into the horizon. This was the first moment that I realized it was now real. The only sounds were those of the surrounding landscape. We were now standing on a remote beach ready to start this adventure. We hiked up a small creek to where a Barney’s Bombshelter would become our home for several days. 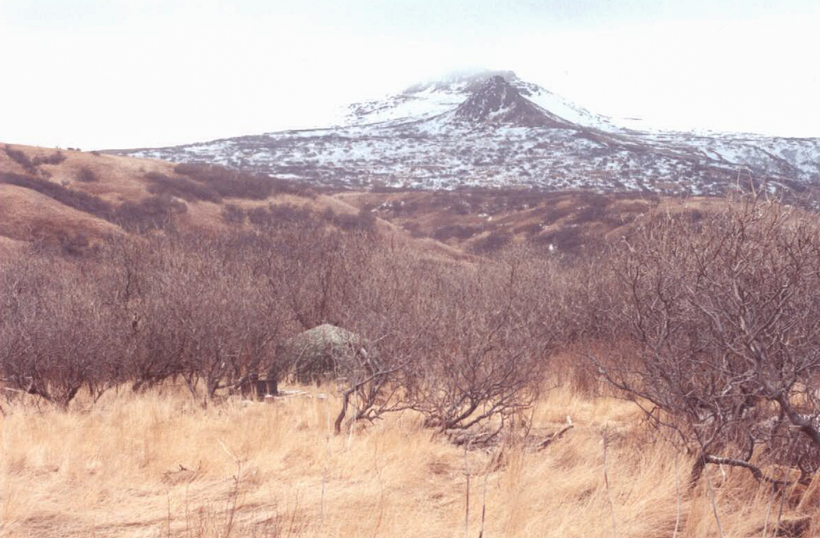 Picture of our camp and the glassing peak above

Once camp was set up and stocked, we were able to glass for a few hours before calling it a day. Being on Kodiak Island in May made for some very long hunting days. The short nights were only three or four hours of actual darkness. Because of this, I thought we would hunt all of the time with no regard to mealtimes or sleep. Although I was easily ten years older than Sam, I looked like the overly excited little kid while he seemed like the old seasoned veteran. I know he was laughing at me inside. He finally told me that this hunt was long and would require patience. He informed me that we could not run up every mountain because brown bears will leave the area if we spread our scent. I knew then that this would be different than chasing deer and elk back home. He pointed out a spot far above camp that he called the crow’s nest. That is what we would climb to daily. 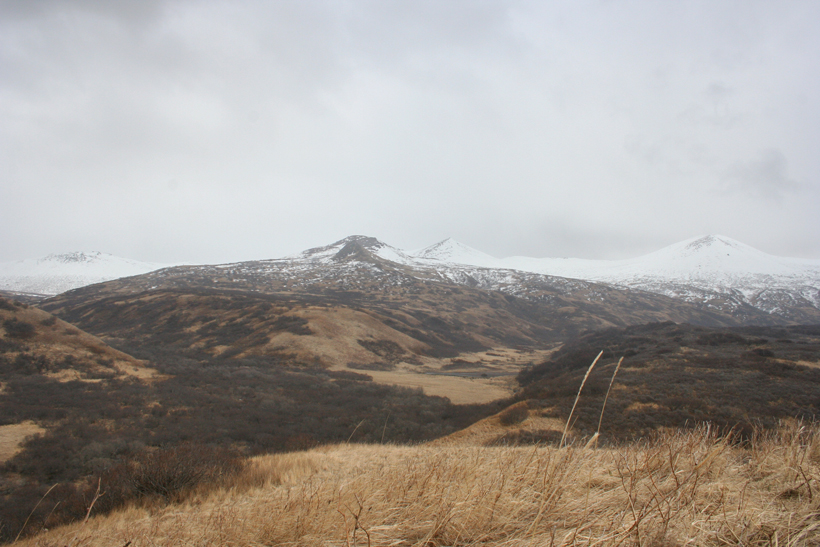 View of the Crow’s Nest from hill above camp. 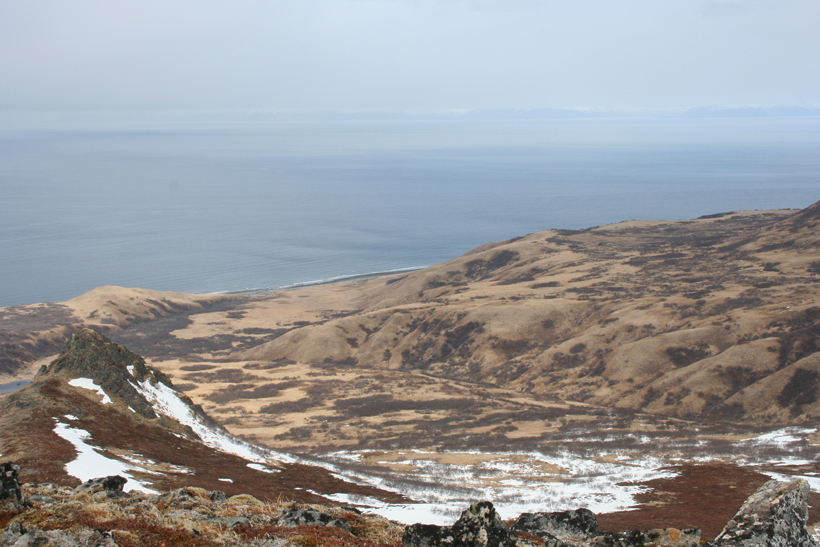 View from Crow’s nest back down to camp.

The daily climb to the crow’s nest was fairly long but the view was great. It offered a great vantage point. With the winter holding on as long as it did that year, Sam informed me that we needed to be more patient than ever because some bears still had not come out of hibernation. The first bear that we spotted was actually a sow and her cub that had just dug out of their den for the year. The sow was very lethargic and laid on the snow moving very little. I remember not wanting to move my 15 power binoculars off the bears because it was an awesome sight to watch.

The weather was extremely unforgiving. It snowed and blew for several days making glassing difficult and the conditions wet and miserable. 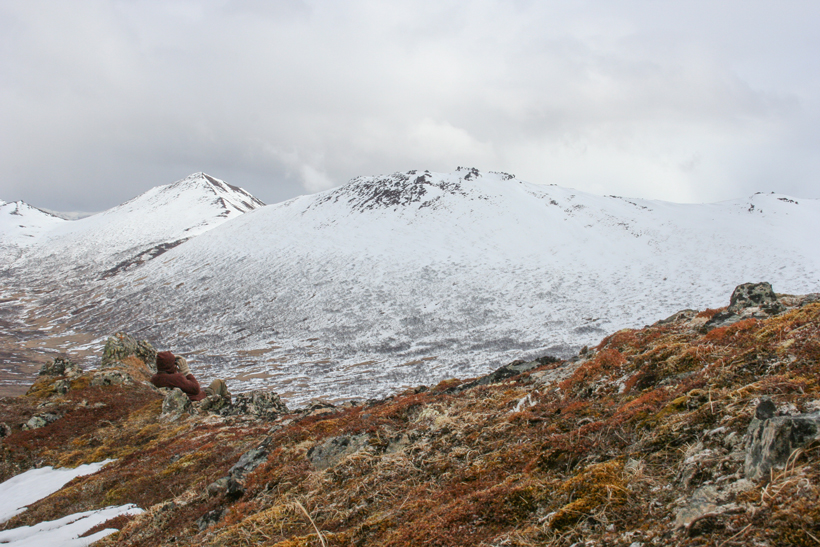 Sam glassing and trying to stay out of the wind.

At one point, we could not hunt for two solid days due to major storms. When the rain would stop for a short time, I would spring out of bed excited to get back to hunting. It was during these days that I found out what a “sucker hole” was; full of optimism, I would head out of the tent only to have the storm return, sending the sucker (me) running back to the tent. After doing this about two or three times, and noticing that Sam would just lay in bed and read and laugh at my lack of patience, I finally learned. Those days spent around camp were long. I learned the value of a few good books. When it rains on Kodiak, it really rains. The weather finally broke. When the sun came out, it was like spring had finally arrived and the bears started to move. 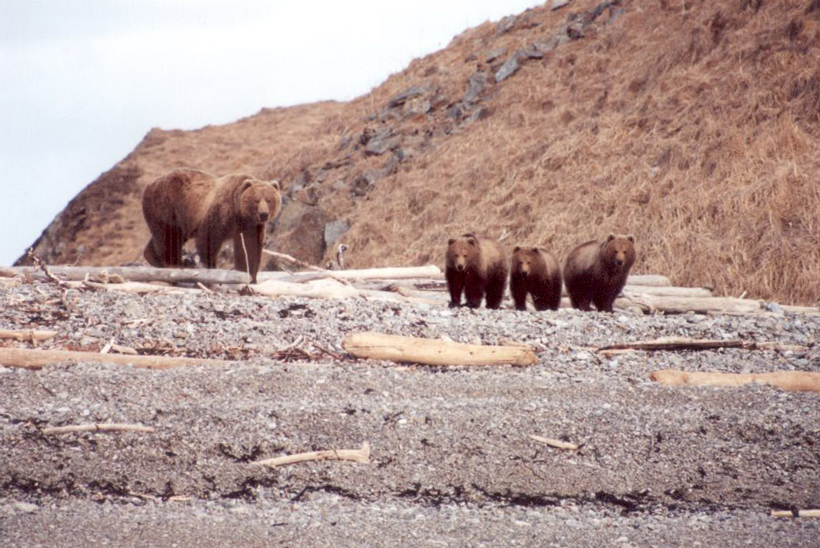 Photo of sow with three cubs.

While glassing one day we were able to locate a big bear far off in the distance that was walking uphill in a snow field, over a high peak and out of sight. Sam knew the valley where the bear was heading and after much contemplation —  and encouragement on my part — we decided to track the bear across the deep snow. Travel was going okay at first, but as we began to traverse a large snow field, we could see large cracks in the ice and snow below our footing. 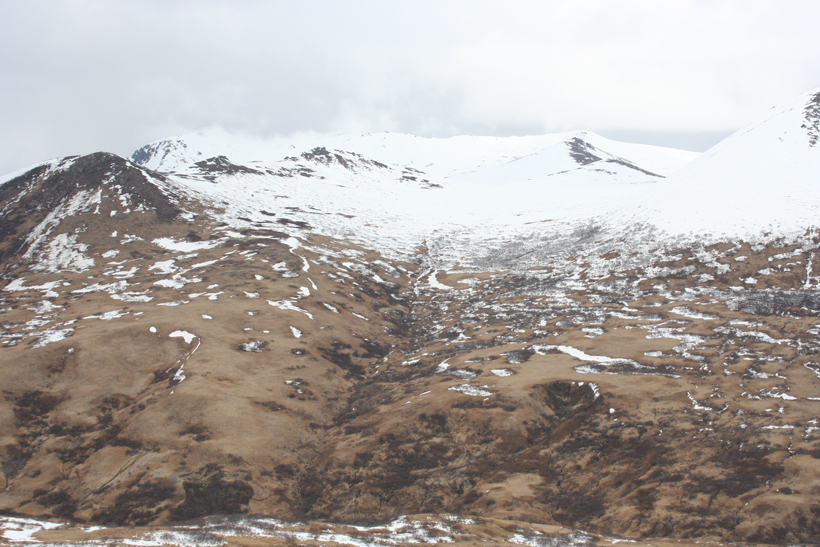 The higher we climbed, the deeper the cracks became as the snow field became deeper and deeper. After several hard hours of breaking through snow on uncertain footing, we made the call to let this bear have this victory. We hiked back to camp to return to the original game plan of patiently glassing from the small hill above camp and from the crow’s nest.

Finally on the ninth day of the hunt, we sat glassing and it happened. A big bear that was plenty big enough for me appeared. As I studied him through my spotting scope, I could see all the characteristics of a big boar: dished face, large hump on his back, long neck and ears that seemed to look like tiny bumps far down the sides of his head. As he walked, he had the telltale swing of his front legs. Everything about him seemed massive. I was dying as I waited for Sam to confirm that this bear was what I was after. Finally, he said, “That bear is big and has no rub. He is gorgeous. Dave, you need to shoot that bear.” 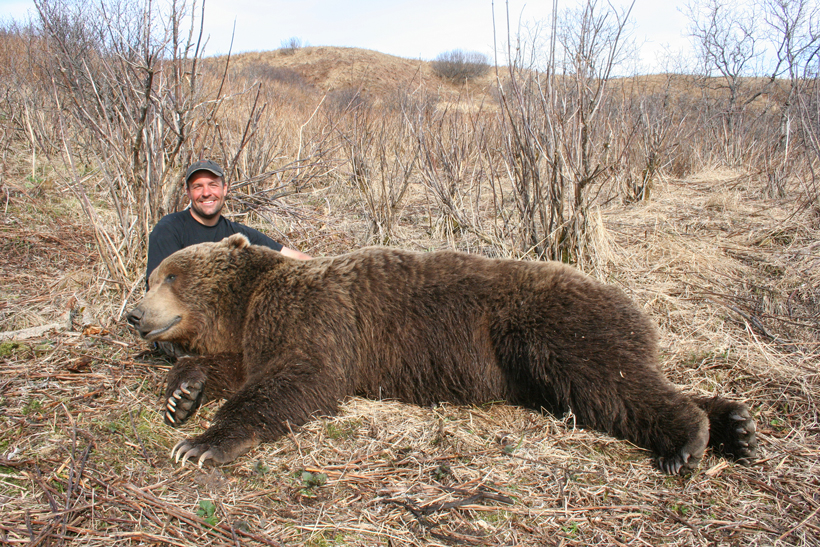 The bear was still over a mile off and working his way away from us. He seemed to move with his nose to the ground, searching for a sow. We ran in order to cover as much ground as possible. Crossing through alders and creeks, we finally relocated him across a small creek. I set up to shoot below the bear at only 150 yards away, placing the first shots to try to break his shoulder blade and enter the vitals. He went into a wrestler-style roll in an attempt to regain footing, snapping his teeth while rolling and running in our direction. 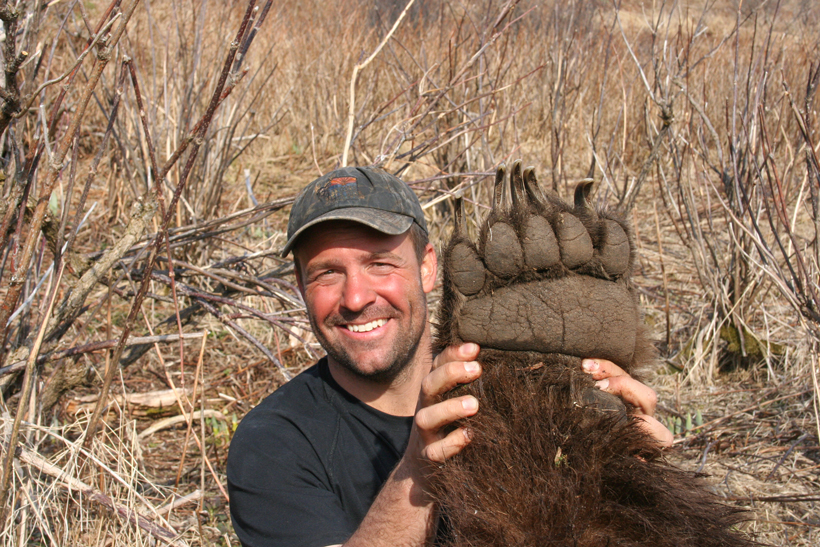 This was it! I hit the bear with every round that my gun could hold as he continued his descent in our direction. Finally, at around 100 yards, he stopped. He was not moving. 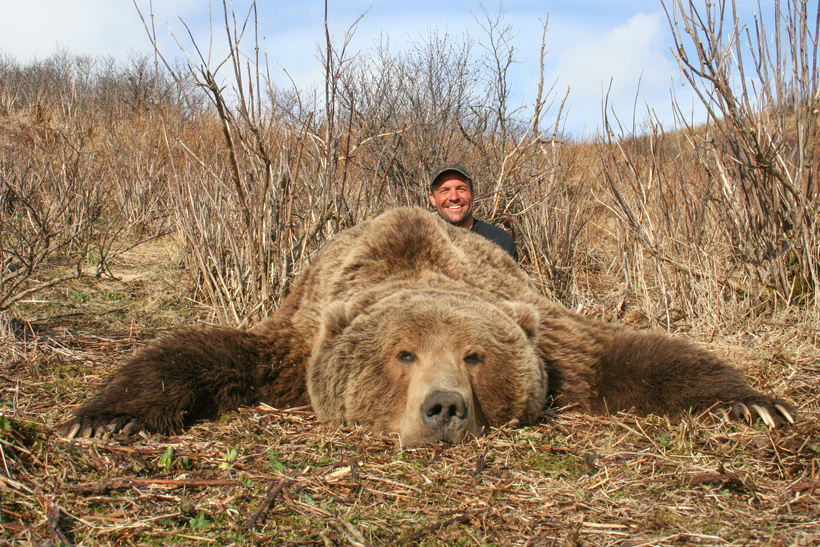 After getting the bear back to camp, we arranged for a super cub to pick us up and take us back to the main camp. Using the little super cub, this took several trips. Although the menu of spam and Mountain House meals over the previous ten days were all that I really needed, it was nice to sleep in a bed and get to experience the cabins and full menu the main camp allowed. 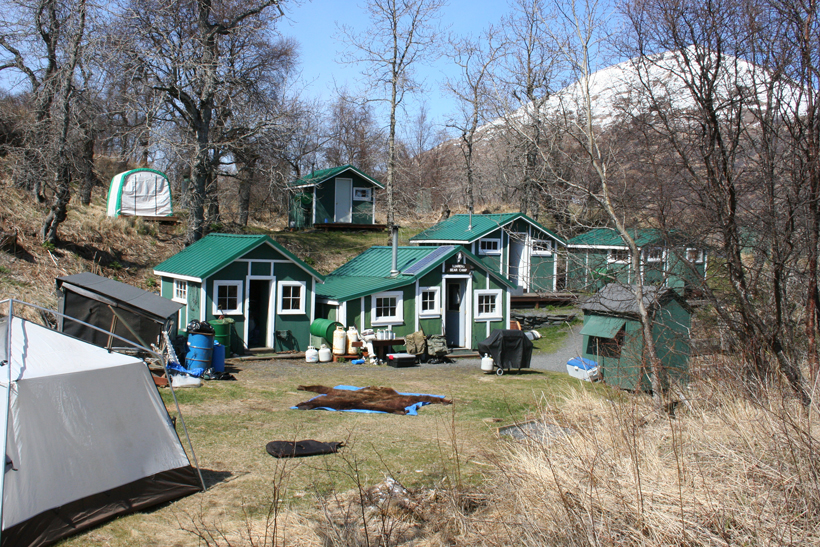 To be honest, the ending was bittersweet. Although I had just fulfilled a long term dream, I did not want it to end. This was not a hunt that I would be able to do again in my lifetime. I was full of gratitude for the opportunity to experience this. I was fortunate to have a friend that was thinking of me and my desires and seized the opportunity to jump on this cancellation. 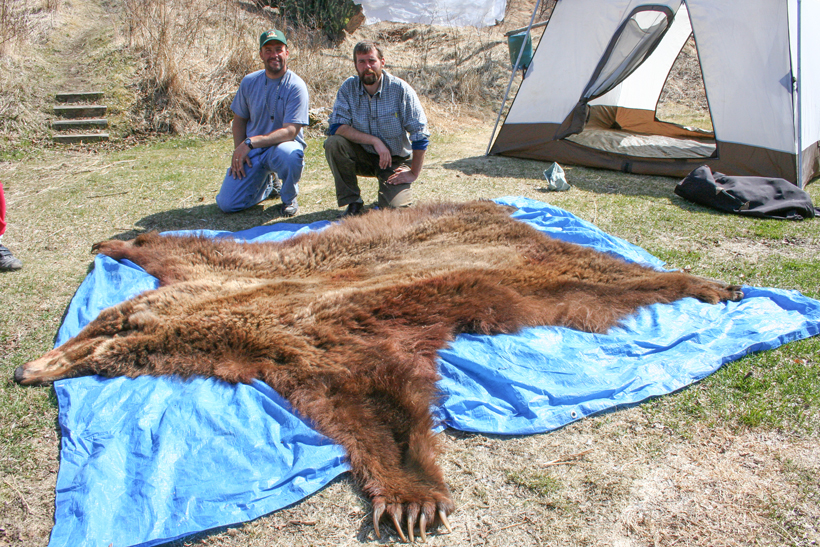 I cannot say enough about the Rohrers and all they did for me on this hunt. They are great people who are fortunate to live in one of the most beautiful parts of the world among awesome creatures. If only we all could be that lucky.