The daily death march in search of the one 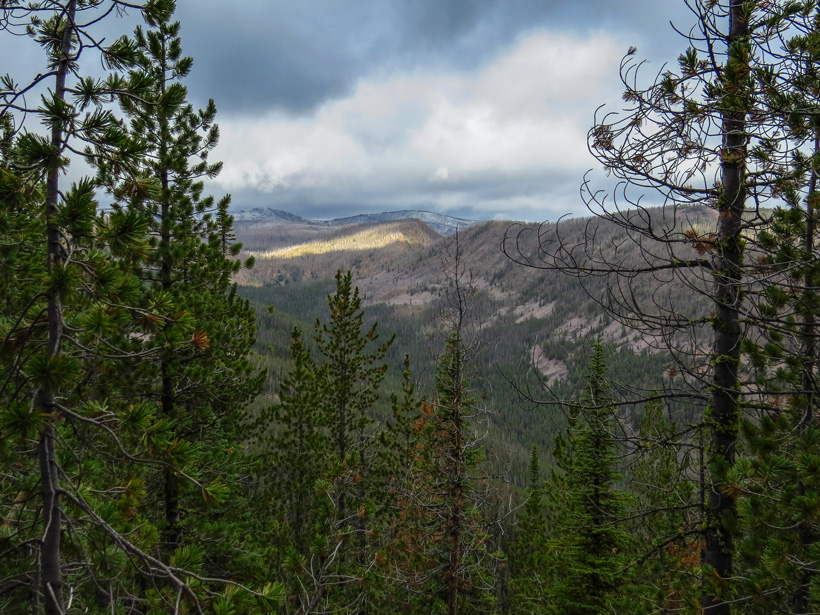 I threw another handful of trail mix in my mouth and mulled over the events that had just transpired. Three years ago, in almost this exact spot, we had our first run-in with a bull that would become lovingly referred to as “the Freak.”  We came to know him on a very cold and snowy day in late September. The rut had mostly run its course and the vocalizations had drastically dropped with this new cold snap. We were working into a totally new area when we found a rub that would eventually work its way into our every thought. 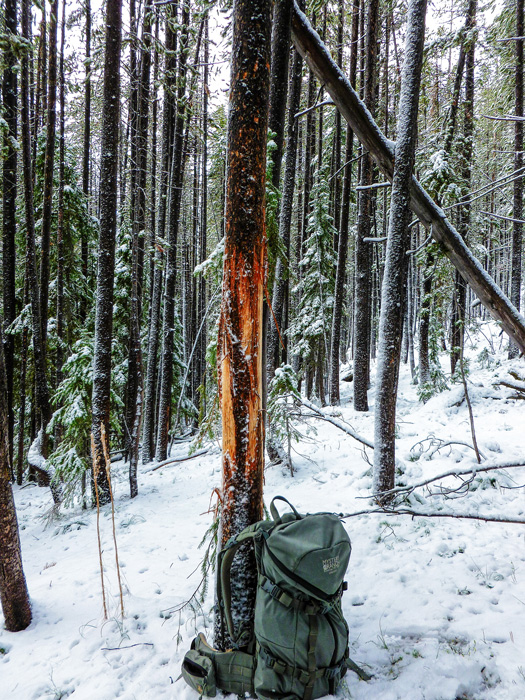 Long deep scratches wound themselves up a 10” lodge pole pine for nearly 8 feet. It was incredible. Eager and excited, we let out a lonely location bugle that was met with total silence. My hunting partner, Josh, and I continued on our path until we ran into the culprit and his bedded cows. What a bull! He had huge beams and fourths and fifths that were staggering; a true giant of a bull for anyone in the general units of Montana.

Over the next season, Josh and I learned a lot about the Freak’s habits, movements and characteristics. Every morning, as we began the death march into “his” basin, he would let out his scratchy bugle almost as if on cue. Several times we had him in very close but swirling winds or young satellite bulls would eventually give us away. 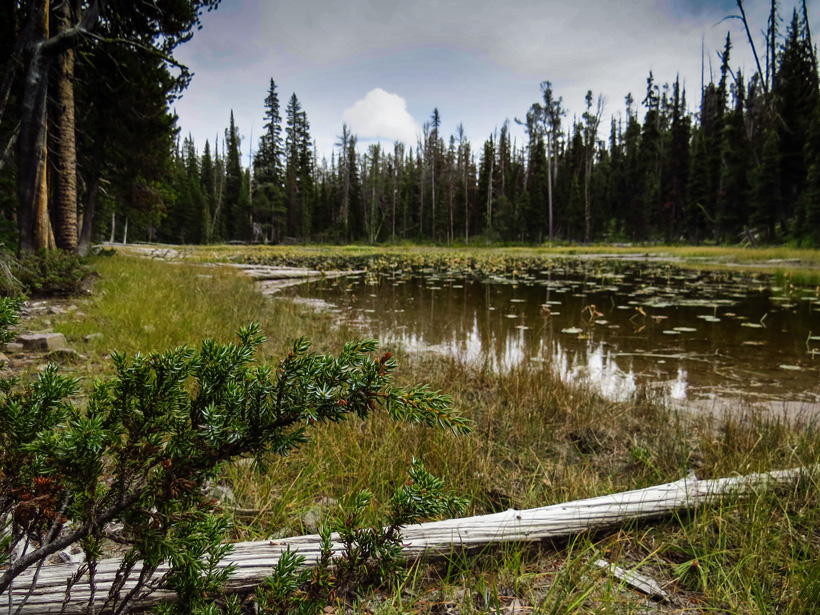 As I continued to chew on some trail mix, my mind went back to the present day, the realization of where I was began to sink in. It was opening morning in Montana and I had worked my way into the Freak’s bedroom. I had heard a few wimpy bugles up ahead and decided to work my way in. We exchanged a few half hearted notes and I could tell he was beginning to get worked up. Once I closed the gap to about 100 yards the bull screamed a nasty challenge bugle and I knew in an instant who it was. I jumped ahead a few yards quickly, got set up, and let out a bugle of my own. After ten minutes of silence, I grew impatient and took a step to gain a little more visibility up ahead.

Not 40 yards away on my upwind side stood the Freak. He had come in silent and instantly blew out leaving me with rattled nerves, heart break and awe. I blew it. The next few trips were spent in this same area but turned up very little in the way of sign, elk or opportunities.

Due to work schedule conflicts, Josh and I only had one weekend to hunt together this year and we were going to make it count. The first day was spent back in the old haunt looking for our bull. Unfortunately, a solid day of hiking, calling and exploring turned up nothing more than sore feet and despair. 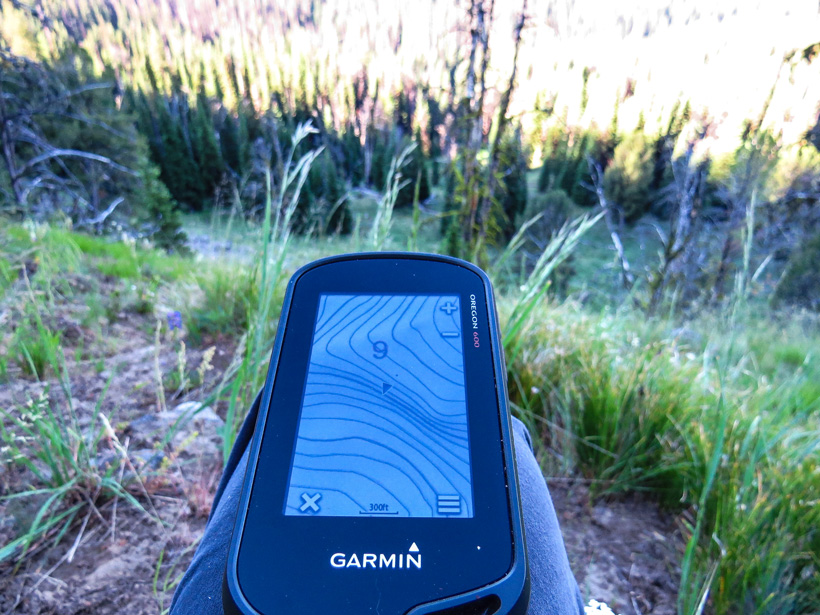 For the next day, we decided to hunt an adjoining area that we had encountered a few cows in the previous year. We arrived at our spot about an hour before daylight, threw on our packs and headed out into the darkness. About 20 minutes into our hike, we heard a bull crack off in the valley below us. Assuming he would head uphill toward a large saddle we were near we decided to stay put and let him make the moves. Most of our cow calls were met with resounding bugles yet it sounded like the bull was continuing to drop down the canyon. After glassing the area ahead and looking at the GPS, we decided to drop down after him. 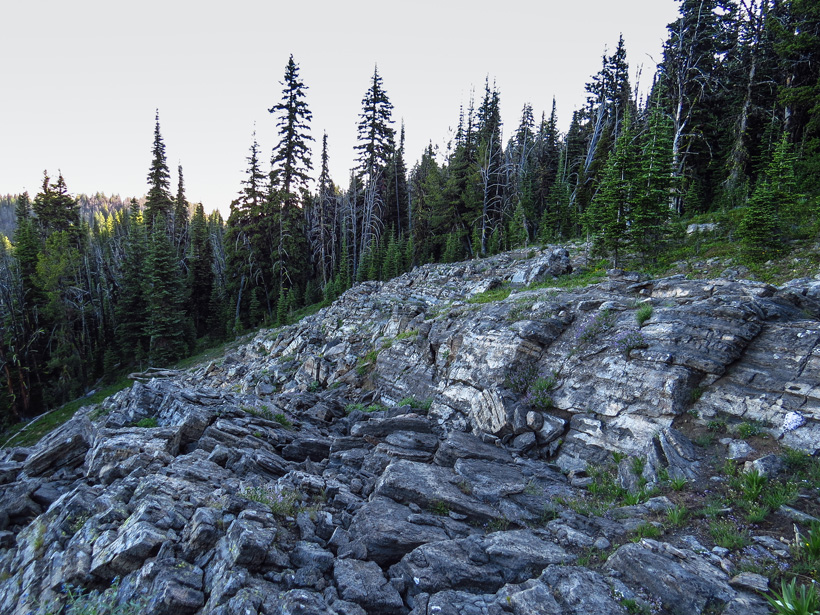 Down we went, exchanging calls with the bull until we neared the 100 yard gap. Josh let out a soft cow call which was immediately met with a scream and chuckles. I obliged to what the bull wanted and ran down the hill hoping he was there waiting for his “cow.” Once I reached where I was certain the bull was, I realized he was on the other side of a small creek and it was wildly apparent he was not crossing it. But he was fully expecting us to cross it. 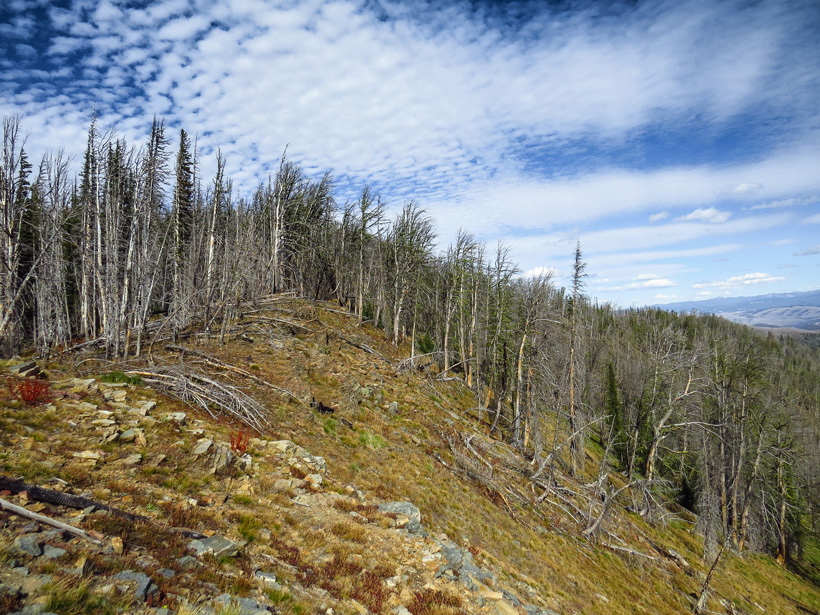 The bull moved up the other side of the drainage onto a small bench where he continued to sound off. With great and consistent winds all day, we quickly followed the bull. Once we were again within workable distance of the elk we split up. Josh stayed back and I went ahead silently about 60 yards before we began to move in. Up the hill we climbed with Josh and the bull exchanging bugles. I continued to close the distance until I felt I was within 50 yards. Josh sounded off one more time behind me and I heard the bull break and come down hill. I moved into position and got ready.

Through a thick tangle of trees I caught small patches of hair and legs as the bull closed in on 15 yards. I came to full draw as he came to a stop behind several branches, ripped off a challenge bugle and began to shred a tree. I moved forward and backward a few steps trying to get a shot to no avail. Finally, I had to let the bow down and prepare to draw again. After a few moments, he began to walk broadside toward me at  25 yards. I came to full draw, settled the pin and followed the bull until he stepped into my lane.

I only remember watching my arrow sink down to the fletching as the bull spun and took off. I quickly gave a few cow calls to slow him down. I felt confident in the shot but it was definitely a high lung hit. Josh met up with me ten minutes later. I quickly gave him the rundown on what had happened. We waited 45 minutes after the shot and then hiked up the trail only to find zero blood. I was halfway expecting this due to the hit, but it was still a blow.

After 30 minutes of grid searching, I heard a stick break out in front of me. Was it him? I took a few steps and could see Josh walking down below me. 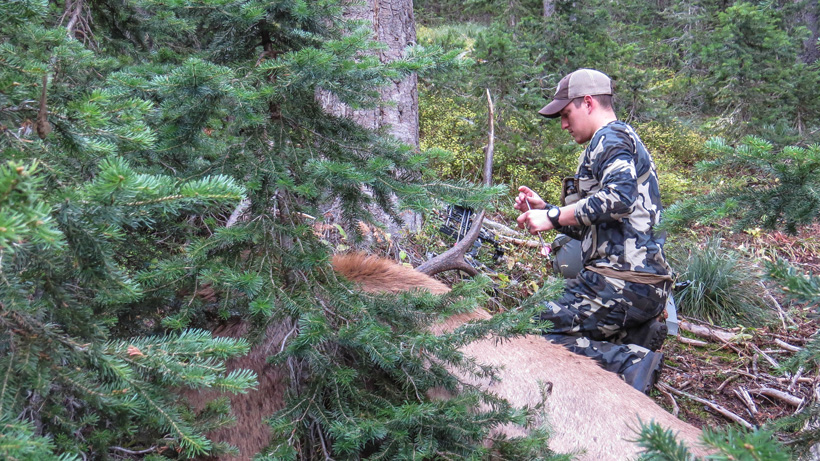 Losing even more hope at this point, I moved forward when I suddenly saw the unmistakable shape of an elk’s head. Josh found him! 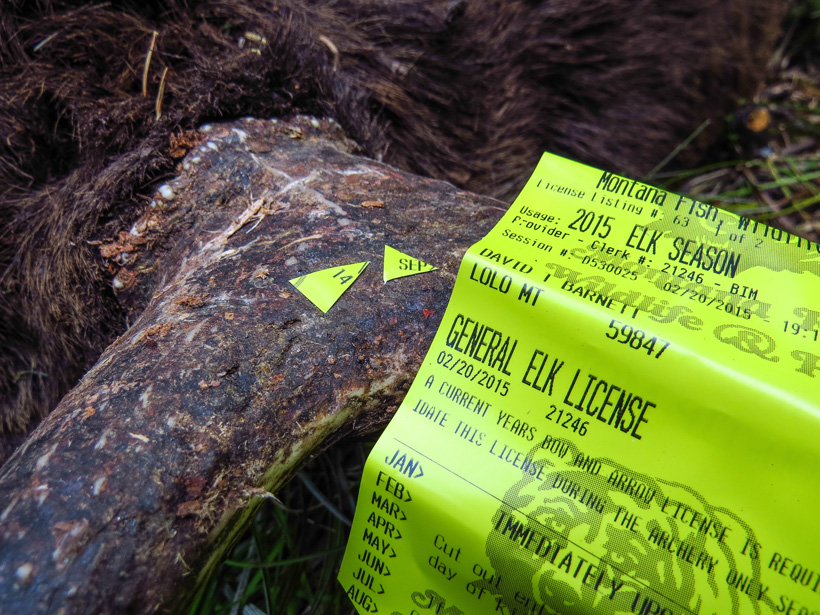 We hurried over to the bull to examine the shot and exchange handshakes. He was a beautiful 6x6 and a bull I am very proud of. 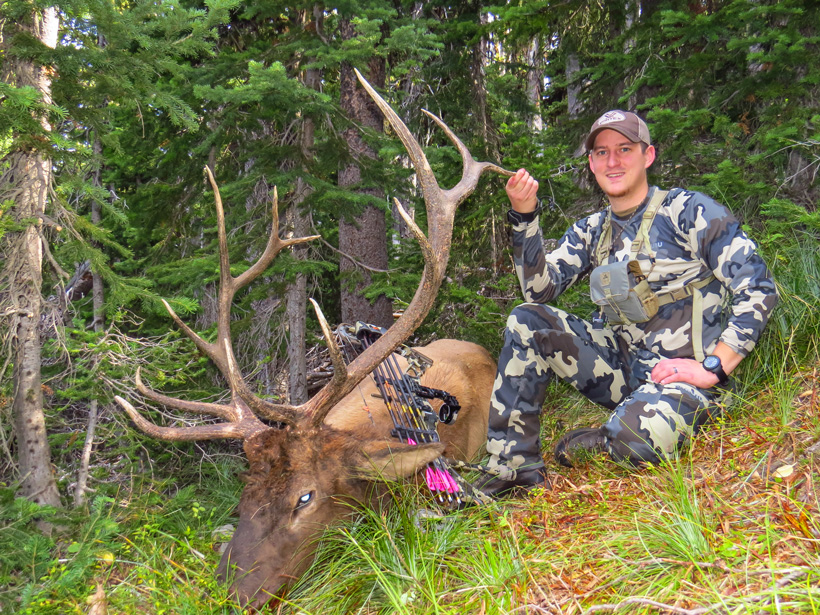 We have worked unbelievably hard over the last few years. To see it culminate into such a great hunt made it that much better. 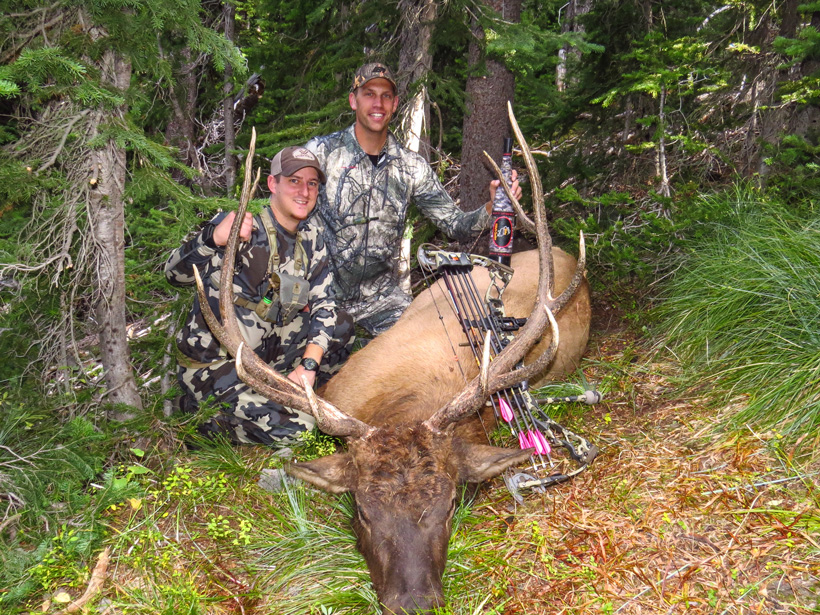 The next half hour was devoted to getting lots of pictures and then we began the quartering process. Once the bull was fully quartered, we loaded up our packs and made our way down to the truck. 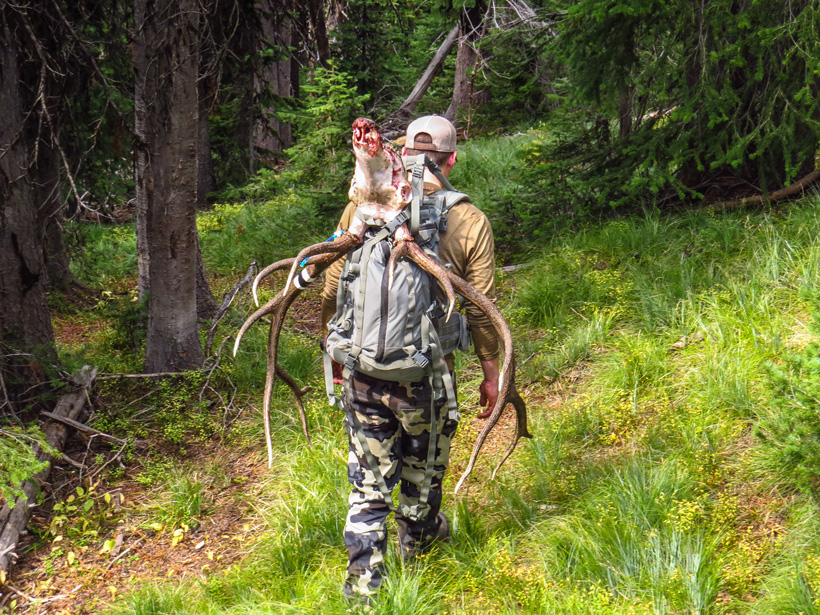 The most important part of this trip was Josh. Without his calling and willingness to climb into or drop down whatever hellhole we found, this hunt would not have had the same outcome. 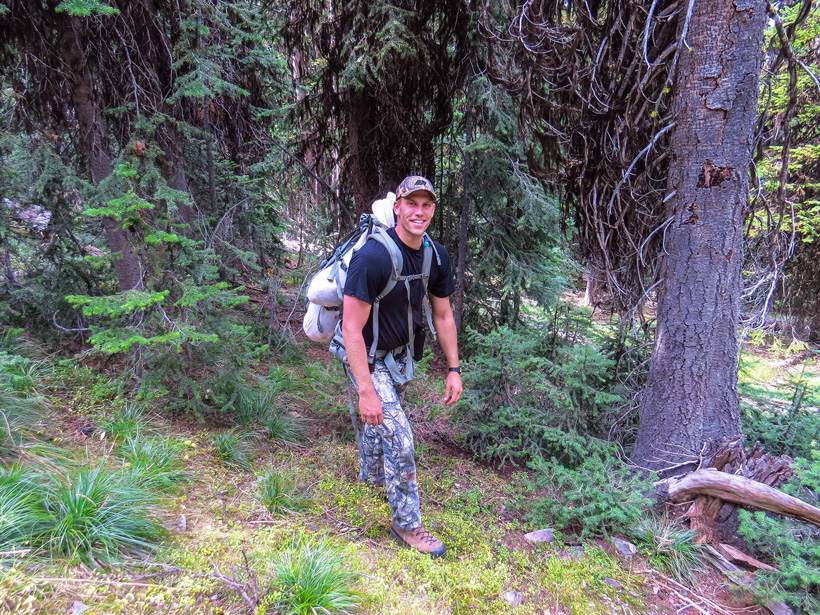 He works hard to find elk and even harder once they hit the ground. For that, I am forever grateful and appreciative. My bull was not the Freak we were after, but taking a mature bull on public land is far more than I could have ever asked for. 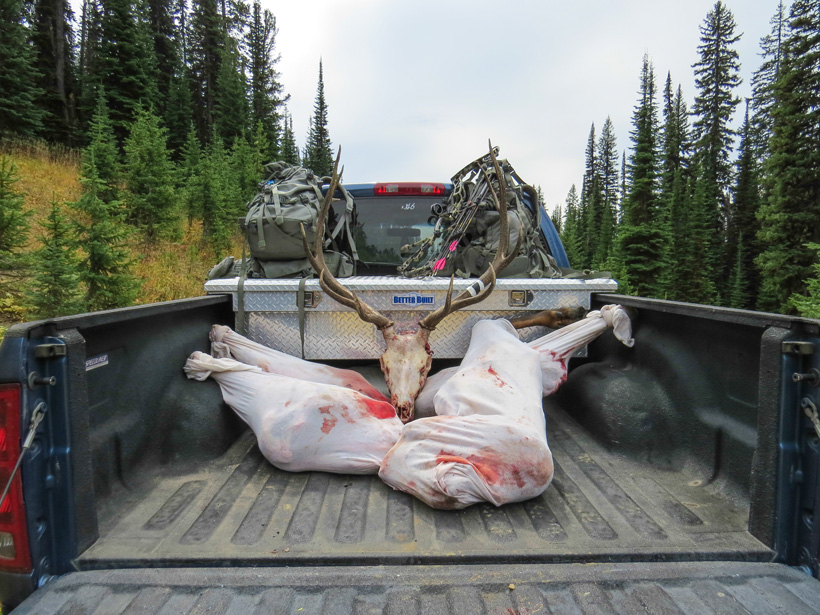 I find comfort in the fact that the Freak is still out there. While either one of us would love to have him on the wall, he has become a sort of living icon. He represents a lot of things for us: perseverance, hard work and a desire to explore. He’s the reason to get up every morning and return late every night. If he were to die an old bull, in his realm and on his own terms, I would die a happy hunter.