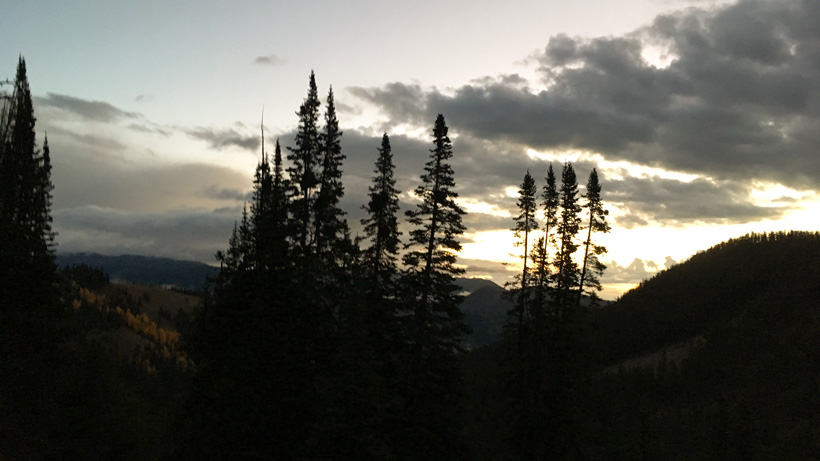 Leslie, Cally, Jessie and I have been raised (or mostly raised) in Wyoming. We are proud of our Wyoming heritage and believe that, for the most part, women that are raised in Wyoming are raised differently and with a different mind set. Now, we like to get dressed up and look gorgeous as much as the next lady, but we are also encouraged to be able to confidently handle ourselves in the wilderness (while managing a string of pack mules or horses) and we all have a fond relationship with weapons.

We started the tradition of an all girls hunt last year and had a great time. We successfully spotted several smaller bucks and a very nice black bear.

This year’s trip descended upon us quickly and, before we knew it, our second annual all ladies hunting trip began with a bang! We gathered for an after work get together to scope out Google Earth to determine our best route into the high country. Before we left, we downloaded our GPS coordinates and texted them to one of our local search and rescue unit members along with our anticipated return time. Cally, a search and rescue member, always says safety first. 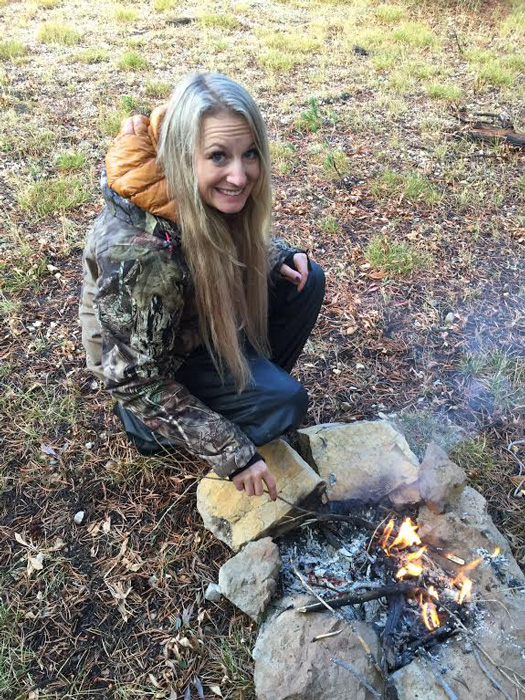 We decided to trailer up the night before and spend the night on the mountain so that we were closer to our hunt location. Camp was set up in the midst of a rain storm and, over campfire food, we talked about life and contemplated our game plan for the big adventure in the morning.

Alarms went off at 4:30 a.m. and, while our cowboy coffee was percolating, we saddled up our horses and filled our panniers. We headed out in the dark with nothing but a little light from our headlamps. The trail was wet and slick from the rain all night but our horses were rearing to go and pushed through. We came across the first buck of the day about three miles into our ride. Cally decided to take a shot at it, but due to the moisture in the air and her lack of a scope cover, her scope fogged up. So, instead, we watched the glamourous buck trot off into the dense pine trees. 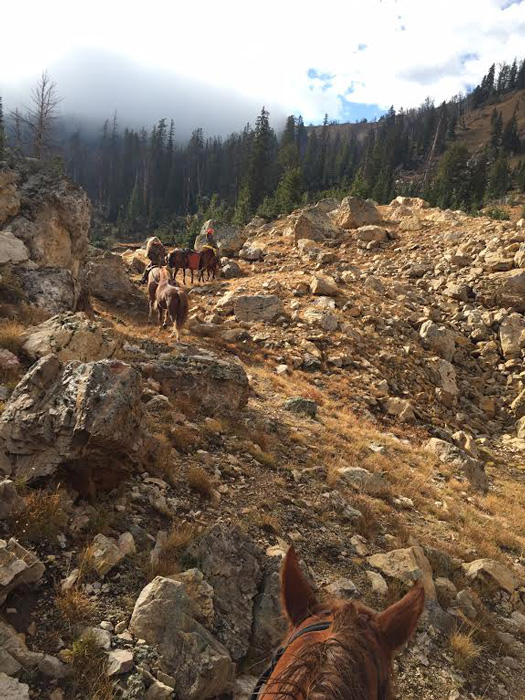 We continued climbing in elevation into a high mountain bowl. After securing our horses, we crept up over the top of a small ridge right at dawn, slowly glassing to ensure we weren’t seen first. Jessie and Cally set up facing the south rim of the bowl and Leslie and I went to the north side, hoping to push the trees in hope of moving out game toward the south and to spot for ourselves.

As we crept out to glass the north rim, I spotted two deer right away as the sun peered out of the fog for a brief moment—just enough to let me catch a glimpse. One was a small buck and the other looked to be a decent 3 point. I used my range finder to calculate the distance. They were at 520 yards, which I felt was too far for me to shoot. Leslie continued to glass them as I tried to sneak up closer. I was able to get 400 yards from them so I set up, took a deep breath, and aimed a touch high to account for the distance and elevation before pulling the trigger. Unfortunately, the elevation I held for was more than I had anticipated and I shot right under him. However, he didn’t know where we were and only ran a little ways into a small group of trees. Leslie and I watched for him to move out, but fog had poured in so we had to move closer to find a better angle. By the time we got into position, the fog had lifted and the sun peered out again. I was able to spot the deer right away; they had trailed back to the same location and were feeding again. This time, they were only 300 yards away. With a deep breath, I took another shot. Success! We watched him go down in a small group of pines and he never moved from that location. Leslie and I were so excited! We gave him a few minutes and then started to make our way toward him.

In the meantime, to the south of us we heard a shot ring out. Leslie and I hoped that we had scared something out for Jessie and Cally and that they had one down as well. 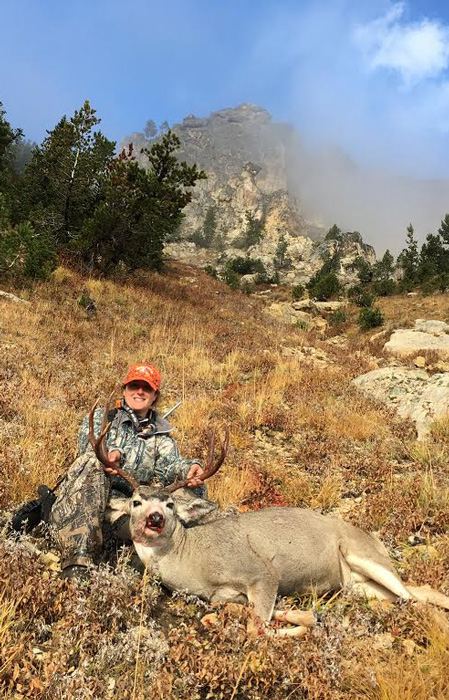 Leslie and I hiked up into the steep bowl. Eventually, Leslie found him wedged in the patch of pines. It was perfect—just as the sun peered out of the fog, we had the opportunity to admire the beauty all around. 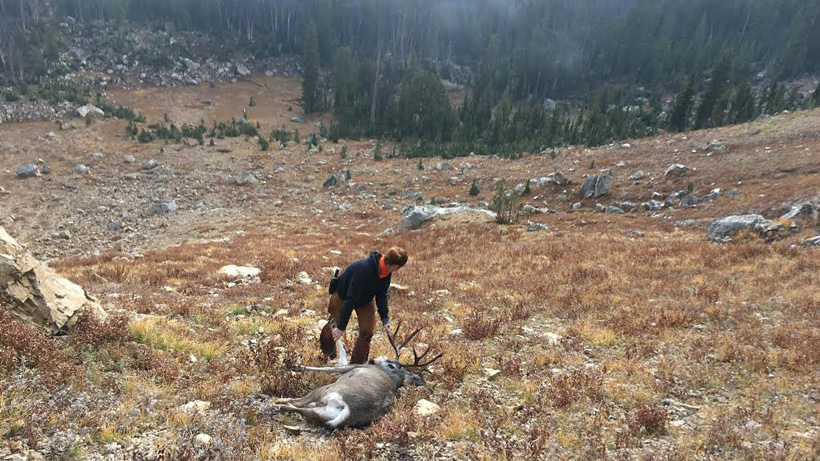 Leslie dragged my deer about halfway down, then we headed over to get the other girls and our horses. We were hoping to dress one out there and then to dress mine out. Once we were back to the south side, Jessie and Cally told us that my shots had spooked two other bucks out. They had run along the top of the rim of the bowl. Cally had one of the bucks in her sights but elevation again played a part in missing the deer. 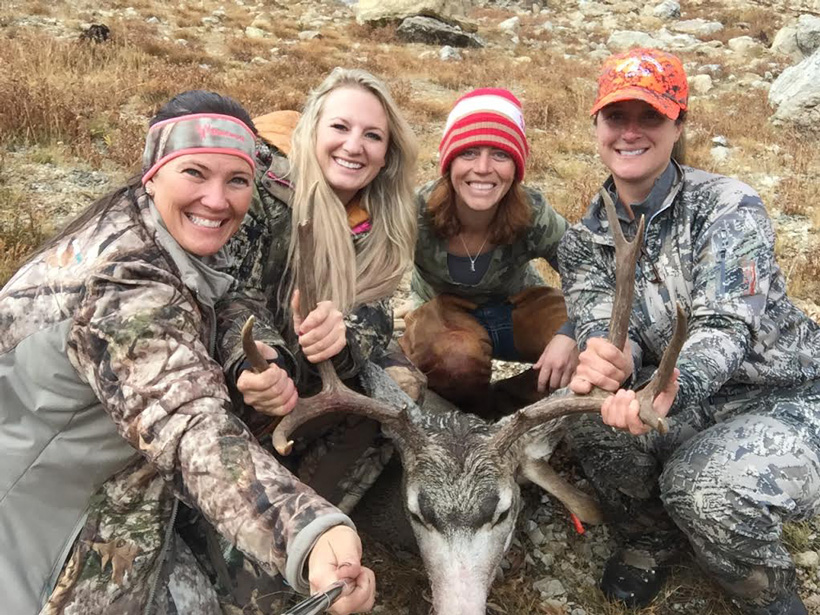 Tylee Williams and friends with her Wyoming mule deer. 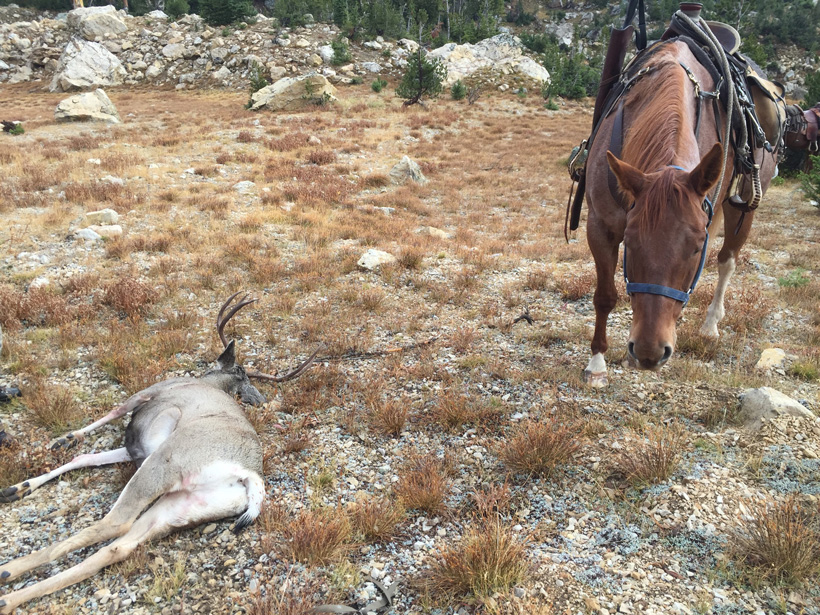 We rounded up our horses and headed over to where we left the buck. Jessie had her horse drag it down closer and we all worked together to quickly dress the deer out. Some of our horses were a little timid around the dead animal so we used a technique to help them overcome their nervousness. 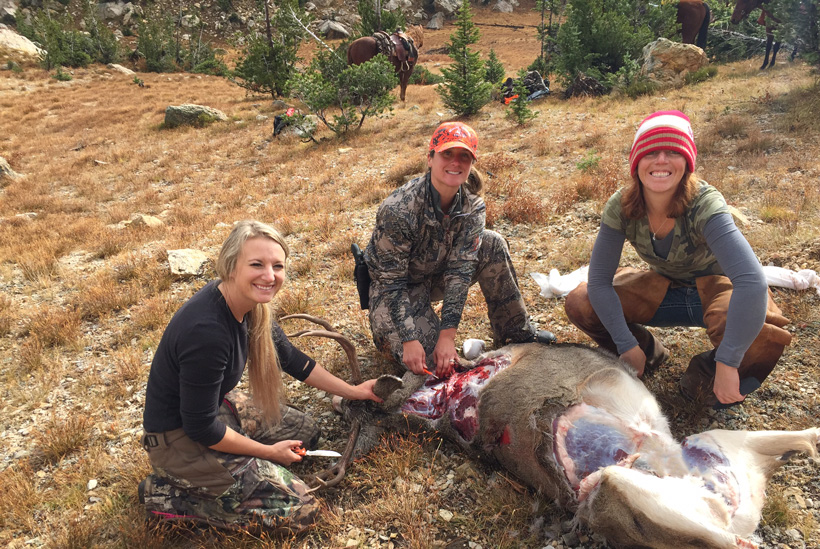 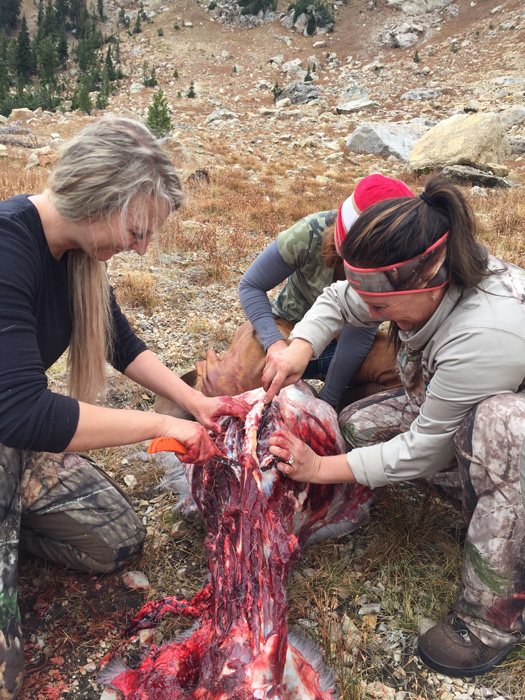 The pack horse, which is a mustang, was calm and collected and gave us no trouble at all. We put all the quarters in game bags, packed it in the panniers and loaded them on the pack horse. 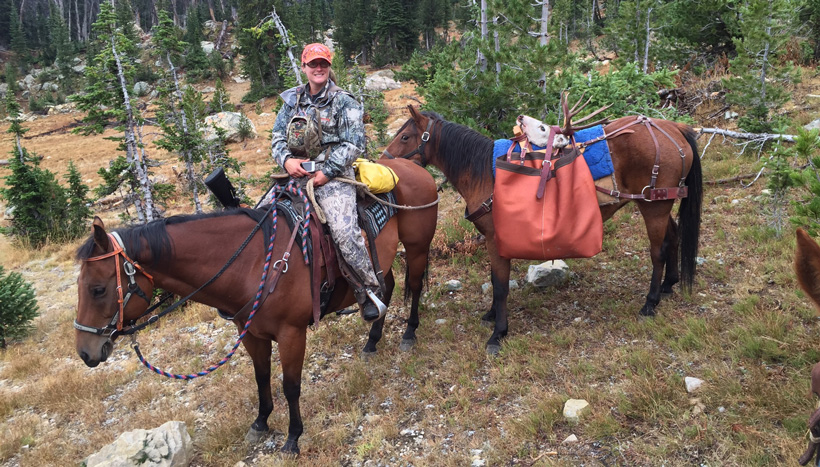 We pulled out of the high country around mid afternoon, packing out a very nice 4 point buck. Our grins were a mile long. 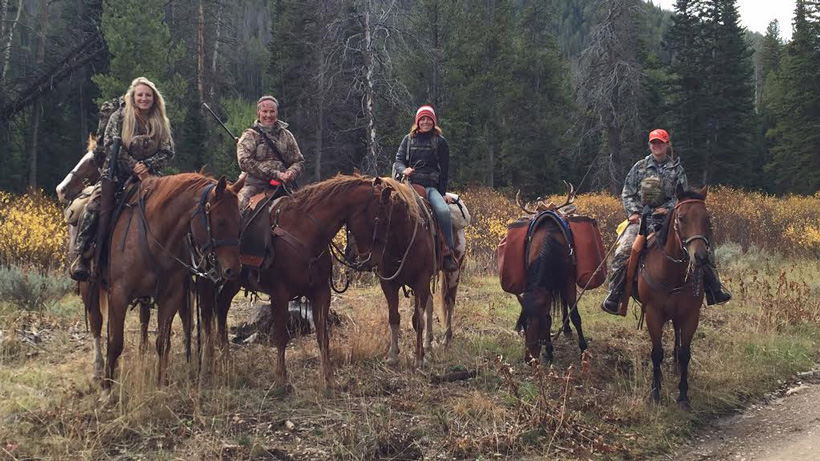 What an awesome day. Thanks, girls, for all your help! I look forward to next year’s adventure.