Proof that second time's the charm for Arizona elk 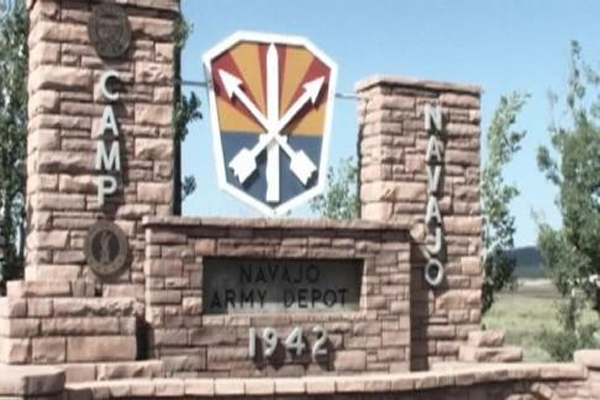 This hunt was a sort of redemption for me, since I drew the same tag in 2011 at Camp Navajo and got skunked. I drew a Wounded Warrior tag to hunt any elk (cow or bull) on Camp Navajo in Arizona (previously Navajo Army Depot). Our hunt was from Sept. 12-18. On opening day, I passed on a handful of smaller bulls. We were on elk right at daybreak, but I didn't want to jump at the first thing I saw. One of my buddies that also had a tag was on his first ever elk hunt, and he killed a nice cow on opening day, right at dusk. 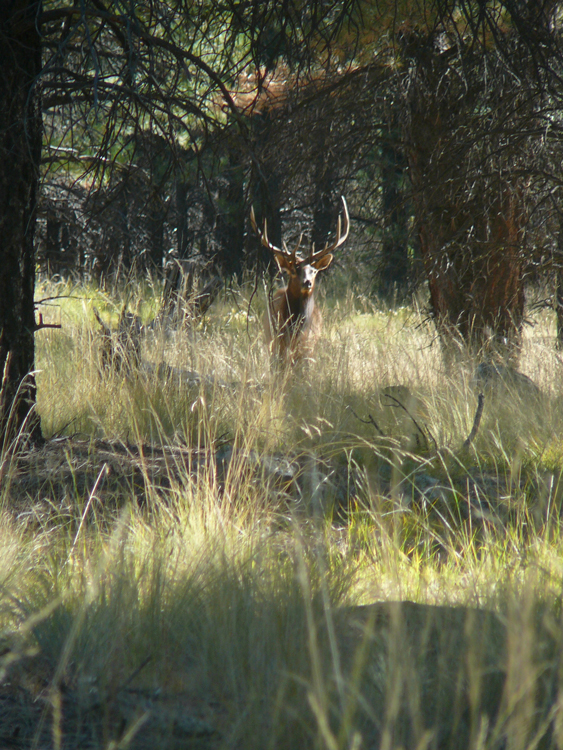 Saturday morning at daybreak, we saw a bull up on a hill about 60 yards away. To make a long story short, I didn't take the safety off, and watched as a great bull ran away from me. We didn't see much else on Saturday, and it rained most of the afternoon which basically ruined the rest of the hunt. 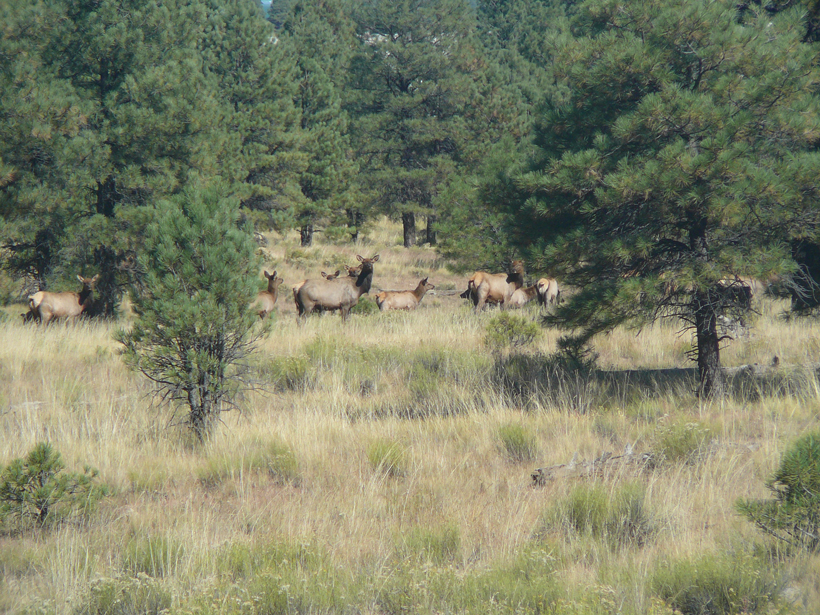 Sunday morning, we were on them again right at daybreak. After hearing the bugles my cousin, Cody Bradshaw, and I went out after the elk. Every time we would get close, they would go quiet. During our last trip stalk, we heard what we thought to be a big bull really letting loose with his bugles, but we couldn't catch up to him. We took a break and were going to call it for the morning, as it was about 8:30 a.m., when Cody asked me which way I wanted to go. Randomly, I said, "Let's go toward where we heard that last bull." We broke out of the trees and at the same time, we saw a handful of elk in a tree line to our right, moving parallel to us at about 350 yards away. Then, that’s when we saw a bull pushing 5 or 6 cows.

Cody immediately grabbed a cow call and started calling at the bull, while I took a knee and came up on my scope, but I couldn't find the bull. I kept seeing cows, and only got quick glimpses of the bull. If they had just turned to their right, they would have been gone, disappearing further into the trees, but for some reason, they turned left, came out of the trees, and crossed a big field right in front of us! I ranged the bull at just over 400 yards (probably 415 or 420 using my mil-dots). I knew I didn't have a lot of time to waste.

I got my first shot off, but didn't know if it hit him or not since he kept going. I saw my second shot hit him near the chest, but he was still trotting. My third shot also hit him, and still, he kept on going. He was getting toward the edge of the field, and Cody yelled in my direction to try another shot. 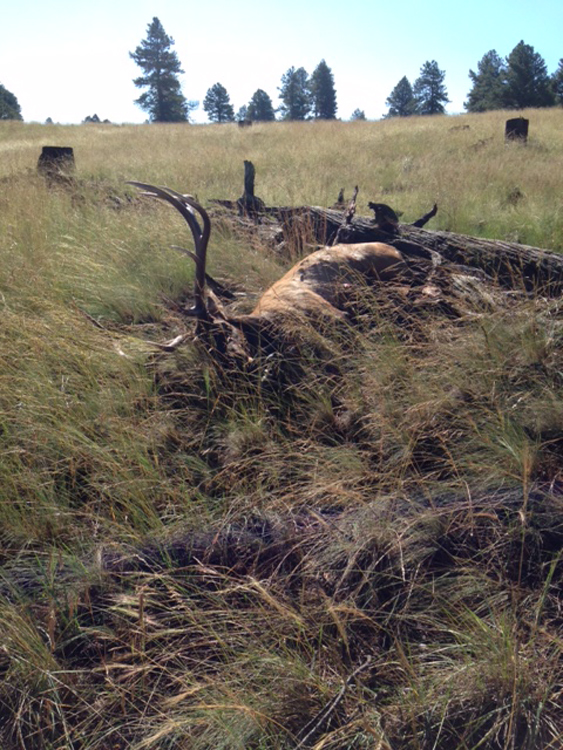 As much as I would have loved to keep shooting, I was out of bullets. After grabbing more shells, I slammed two into the internal magazine. My fourth round missed and I saw it kick up dirt. I fired my last bullet and Cody said, "He is down, you got him!" 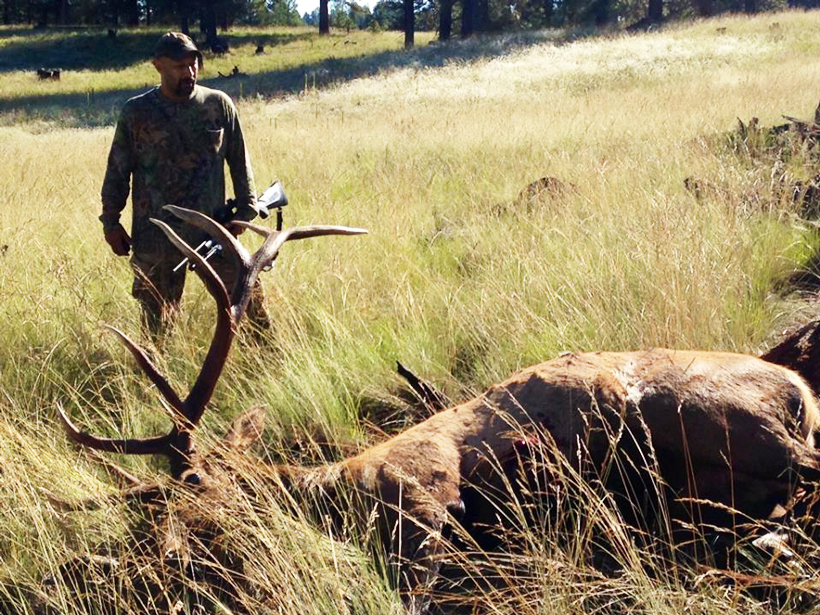 After a short wait, we took off after the bull. Neither of us could believe how big he was. 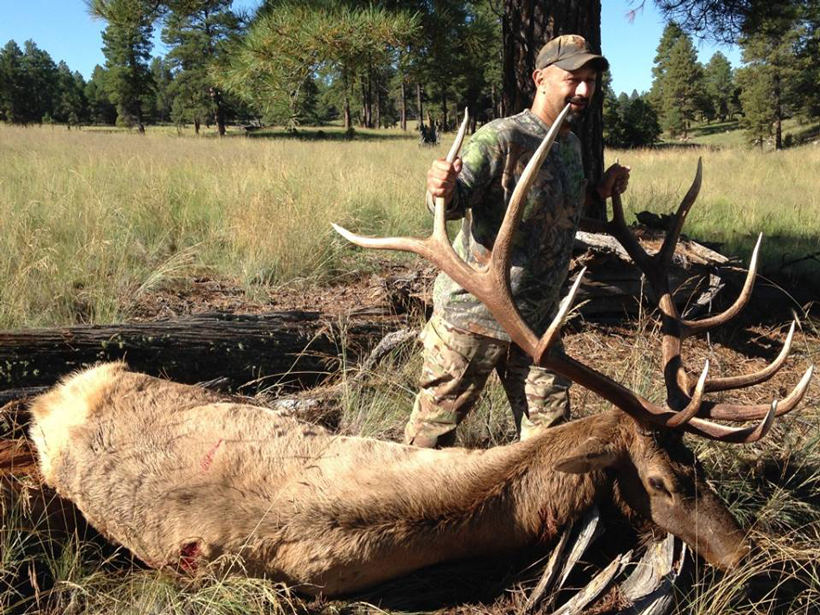 I knew when I first saw him that he was going to be a good bull, but I had absolutely no idea just how big he was until I actually got up to him. I also found that four of my five rounds had hit him. We even found one of my rounds still inside him (the one that hit his shoulder). 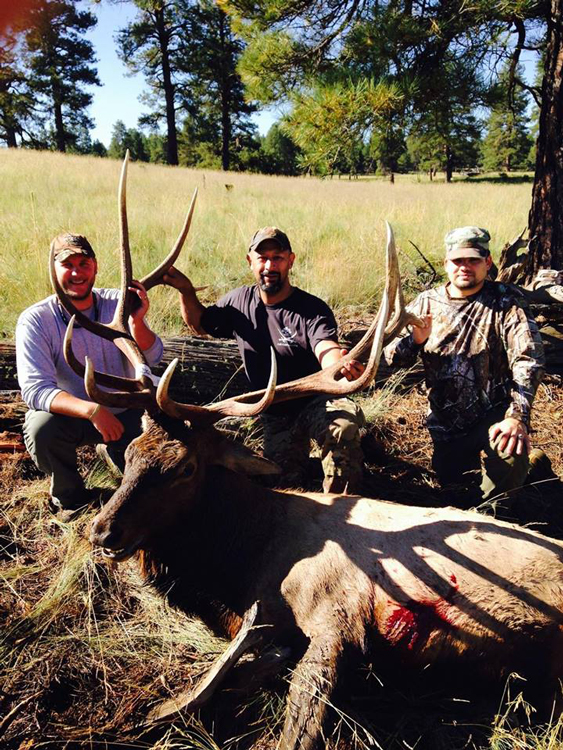 This bull gave us just over 400 lbs. of meat, and now, I'm getting him mounted by H&H Taxidermy out of Flagstaff, Arizona. 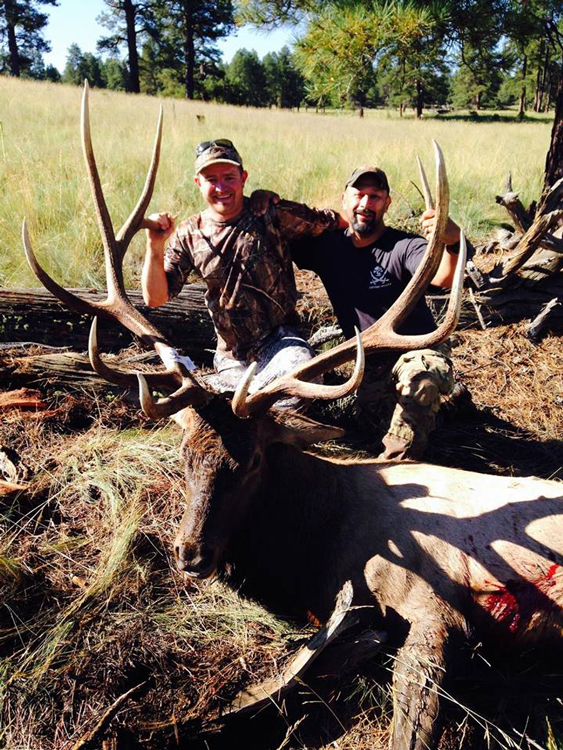 It was also validation for me, because even after being out of the Army for 6 years now, I am still able to make long shots count. 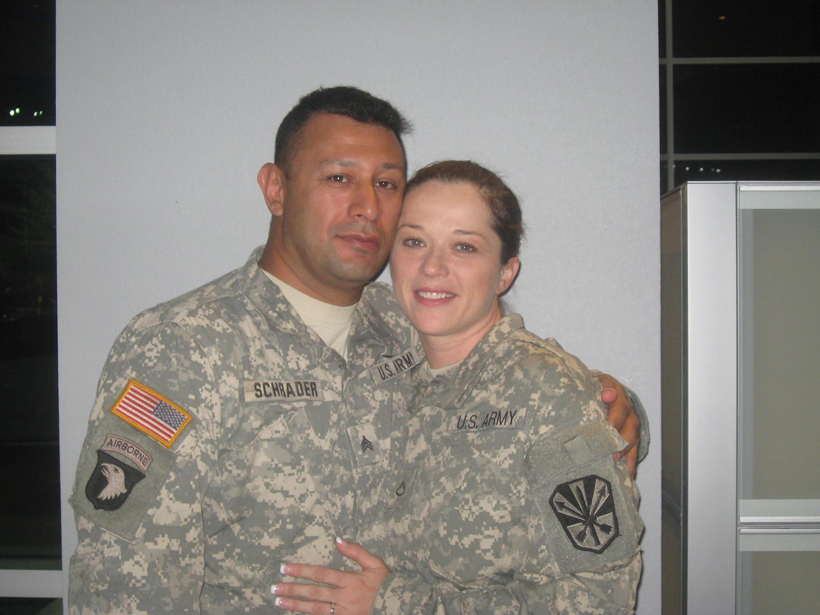 I started out as a parachute rigger in the Army for 4 years then switched over to Military Police. I also taught the MP Basic course. It may not mean much to other hunters, but having a close call in Iraq in 2008, shoulder reconstruction in 2009 and brain surgery in 2012, it means a lot to me that I can still bring my best game behind a long rifle.