Incredible father-son antelope hunt in the plains of Wyoming 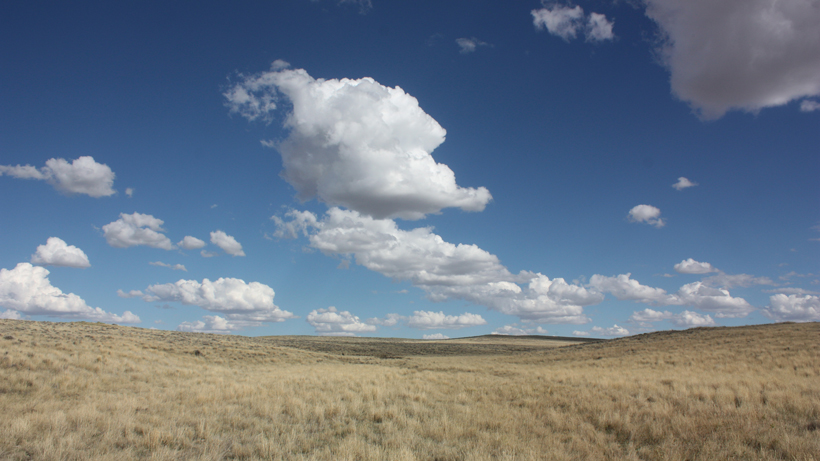 Traveling to Wyoming to pursue antelope with my dad is something that has been many years in the making. The purpose of this experience was, in part, to celebrate entering my 30s as well as sharing a memory with my dad that would, undoubtedly, last a lifetime. We decided on antelope as the goal because of their fascinating taxonomy and abundance of them in the West. 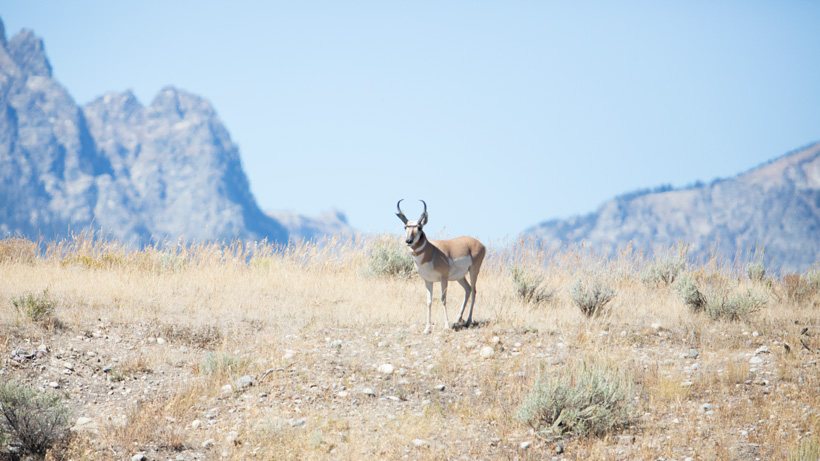 Once the goal became an antelope hunt, I made it my personal mission to learn everything I could about them. I read articles online, bought and devoured books, and enlisted the help of my grandmother to draw me a detailed pen and ink sketch so I could print a life-size antelope target. (Overkill, I know, but this was about more than traveling to Wyoming and shooting an animal that many of my friends couldn't identify by name.)

Thinking well ahead, I decided early on that I was going to field dress the animal myself because if I was man enough to shoot an animal, I'd better be man enough to field dress it myself. (Big thanks to Steven Rinella, Randy Newberg and others for your informative YouTube videos on the subject.)

Adding to the significance of this hunt was the unique nature of my equipment. For starters, I would be using a rifle that was gifted to me by my grandfather a few years ago. It is a knock-down, stunning Winchester Model 70, chambered in .270 WIN. Not only has my grandpa taken several game animals with this rifle, but it was handed down to him from his father.

My great-grandfather was the original owner of the rifle and he hunted with it dating back to the 1940s. (I did a serial number lookup online and the estimated date of manufacturing of this rifle was 1941.) 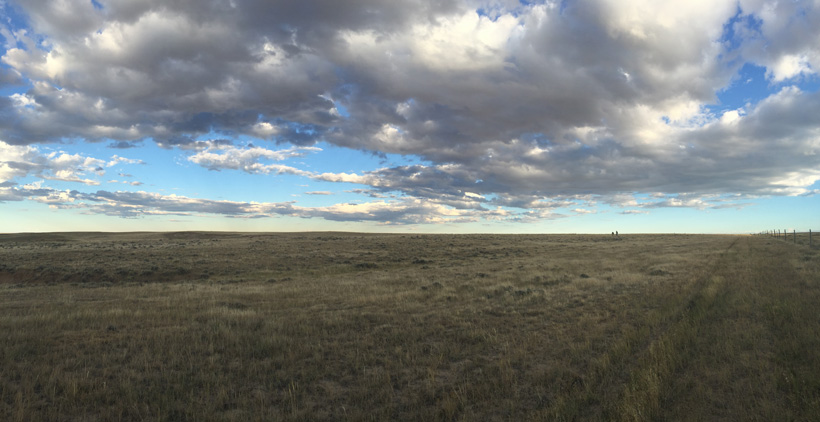 Landing in Casper, WY was the culmination of many months of dreaming and planning and practicing. It was also the very beginning of an entirely new shared experience for my dad and I. We came into the trip knowing that we would see a lot of game, but I don't think anything could have prepared us for just how many antelope we would see.

Jason Hill from SNS Outfitters & Guides picked us up from the Casper Airport in his pickup truck and, before we could even get to the highway to head towards camp, we were already seeing herds of antelope hanging out on every third hillside. We were pleased to learn that there would only be four hunters in camp this particular weekend, which made for a peaceful and more personal experience while there.

Unlike deer, antelope are active during the day and bed down at night. This meant that breakfast could start at 5:30 a.m. rather than 4:30 a.m. 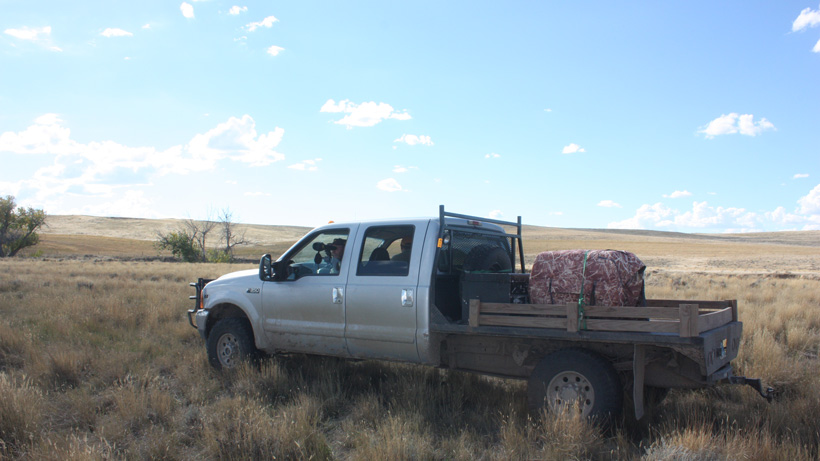 After our bellies were filled by our gracious cooks, we headed out the door in Jason's truck to roam the 60,000 acre ranch that we had access to and prepared to glass some antelope. (Sidenote: I am really glad that I invested in good binoculars; they truly are every bit as important to a successful hunt as a rifle or bow.) 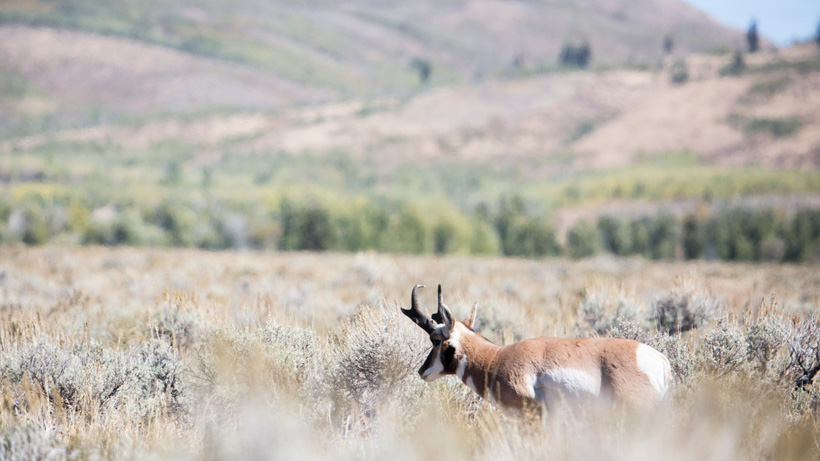 Once on the ranch, we were seeing tons of game from the get-go. Some herds seemed less wary than others, which gave us an opportunity to see plenty of heads and horns and begin to get a feel for the caliber of animals on the ranch. To some degree, all the bucks we saw looked very similar: mature but by no means exceptional.

Before too long, we spotted a buck herding his does up a hill, directly adjacent to the road.

This buck was substantially more interesting in the horn department than any of the other fellows we had glassed that morning. It only took a quick glance to recognize that he was bigger in both horn and body than what our eyes had grown accustomed to. 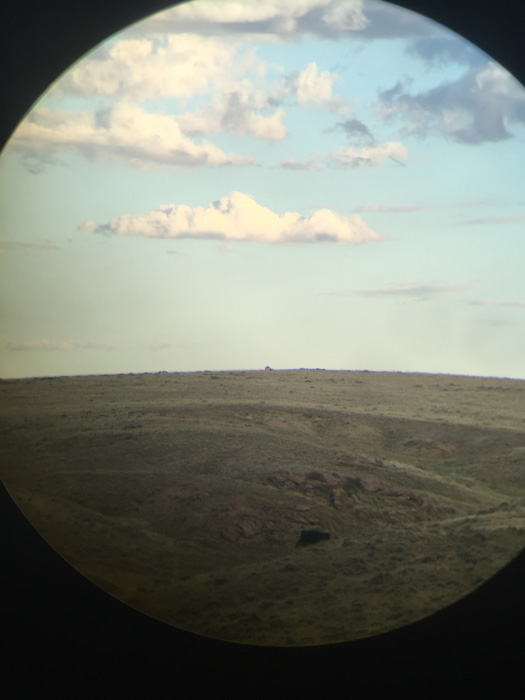 He headed off over the hill and out of sight with a group of about four or five does. One interesting thing about antelope behavior: this was the later stage of the rut and the bucks were still in mating season form. The bucks will accumulate a harem of does and physically herd them to keep them together. If one breaks away, the buck will chase her down and push her back to the herd. 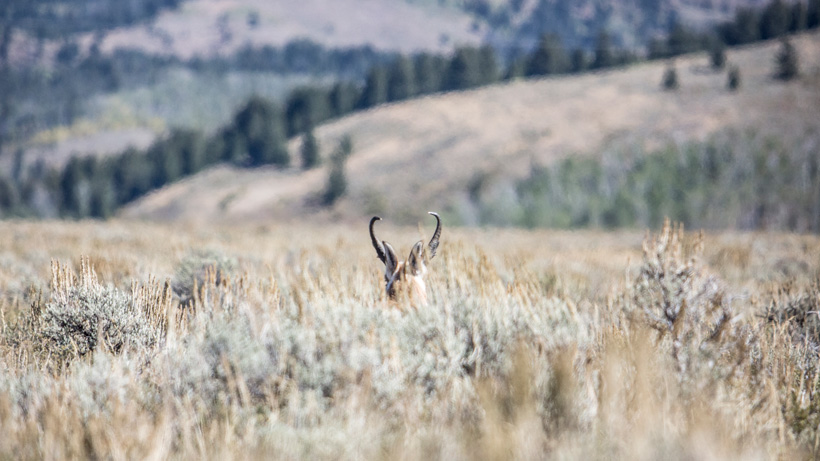 Just as it appeared our fellow was about to put a country mile between himself and our truck, he reappeared over the hill and descended back towards the road. He crossed the dirt track—a mere 80 yards behind the truck—and headed down into a deep ravine and out of sight. He had returned to herd another doe who had strayed behind to rejoin the group we had initially witnessed leaving town. 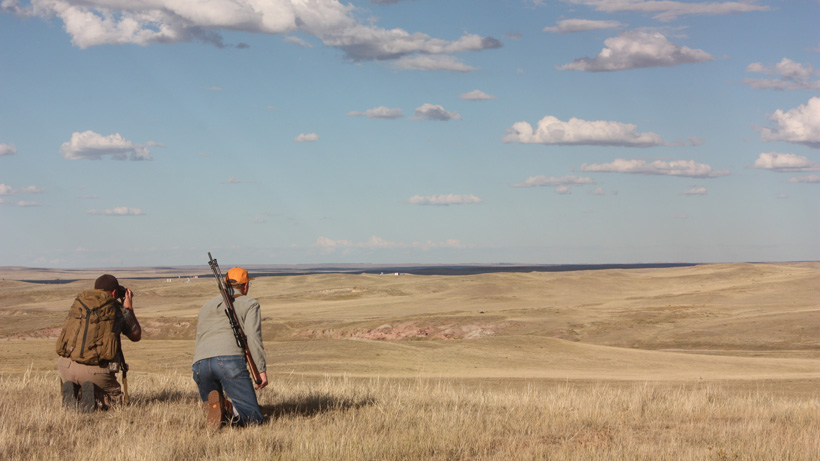 Since it was previously decided that I was going to be the first shooter, Jason turned around and said, "Well, get your stuff, let's go!" Honestly, it caught me a little off guard. The action accelerates quickly when hunting. I started tearing through my backpack, looking for my box of ammo so that I could catch up with the rest of what was going on around me.

Once I had my rifle loaded and in my hand, we crept toward the edge of the ravine to peak down and see where our quarry had gone. It had now been about a full minute since we saw him descend out of view.

To my surprise, the ravine we peeked down into dropped down sharply to a body of water. The perimeter of the water was lined with various sized hills that all sloped down from road level into the basin. Also to my surprise, our antelope buck was nowhere in sight. "Well, I've never seen one swim, so he has to be around that next slope," Jason wisely whispered.

We worked our way along the ridgeline to the next hill, knowing the antelope and his lady friend had to be below us somewhere. However, there was no telling which side of the hill he would be on or how far down he would be. Jason instructed me to dial back the power on my scope from 9X to 4X, which was a wise move considering this could be a short shot that required quick target acquisition. 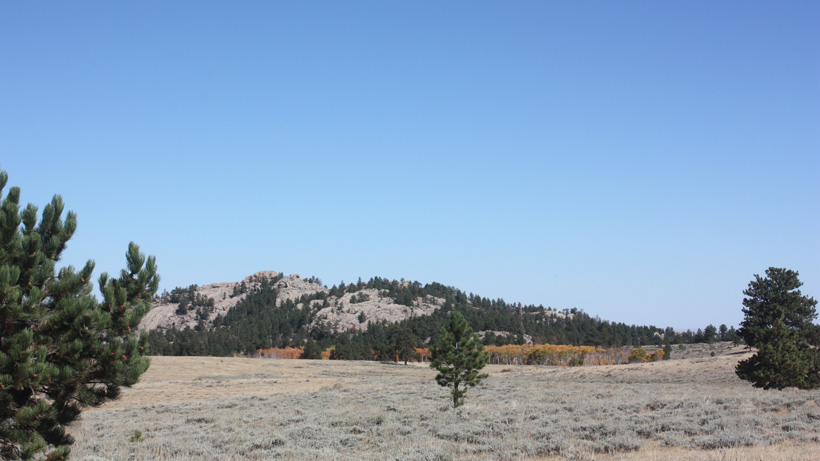 Since antelope have a tendency to continue their trajectory, we decided to work our way to the far edge of the hill upon which we currently stood. This would reduce the chance that he would make a straight run for it before we could catch up.

As we approached the edge again, we peered over, rifle in hand, ready to fire an off-hand shot if necessary. Jason had the shooting sticks ready to go in the event that we had time to set up for a shot.

Apparently we had beat him to the spot because the buck was not in this draw as we expected him to be. In fact, he was just rounding the corner of the hill, about three-quarters of the way down to the water's edge. All we could see was his face peeking around the curvature of the hill, looking un-trustingly into our eyes. Just then, the antelope doubled back and ran out of sight once more.

We started the brisk walk back to the ravine where we initially had looked for him, now approaching from the opposite direction and with a slightly better idea of where our buck was headed. (In the back of my mind, I was a little concerned that he could double back again and have a free path out of sight once he got back up onto level ground.)

Jason set up the shooting sticks. We had a clear line of sight down into the first ravine. 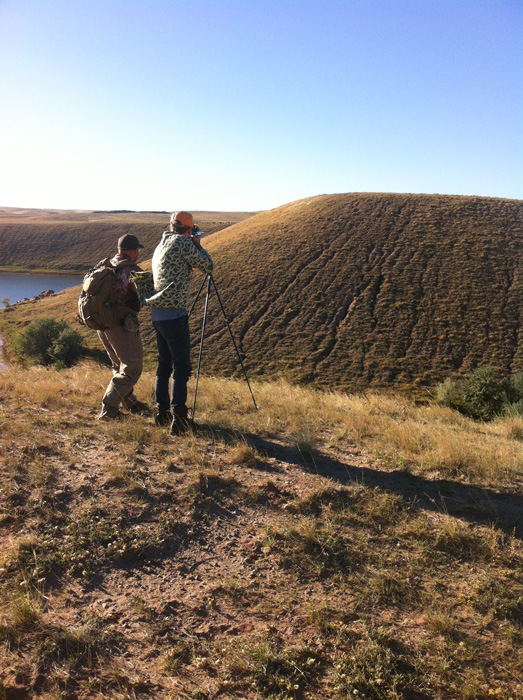 There was our buck, headed up the opposite slope with the lone doe he had gone back for. I fumbled to get settled on the shooting sticks and calm my hands and heart. I really, really did not want to gut-shoot my first big game animal. The buck was working his way up the hill. He paused for a moment to look over his right shoulder at us, standing perfectly broadside for a few moments.

Naturally, I was still swinging the hairs of the scope around like a drunken sailor on dry land, unable to slow my breathing enough to steady my aim, all the while still thinking, "Don't gut shoot this thing..."

Right as I was settling in on his shoulder, he turned and headed back up the slope, resuming his escape plan. Fortunately, this buck either saw the fear in my eyes or felt he still needed to give us another onceover to evaluate our threat level because he paused not once, but twice more. 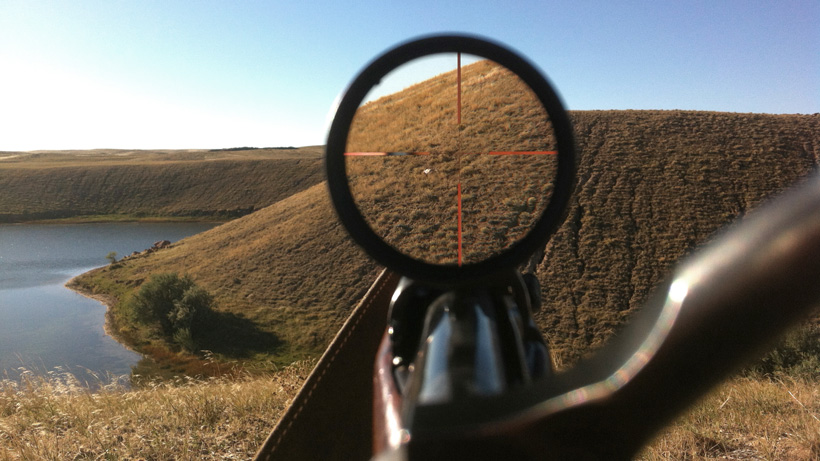 On the third (thank you, Lord!) pause and broadside turn, I finally got my head and hands working in the same direction and squeezed off a round with the crosshairs on his shoulder. The shot struck a little high and to the right, dropping him in his tracks immediately. 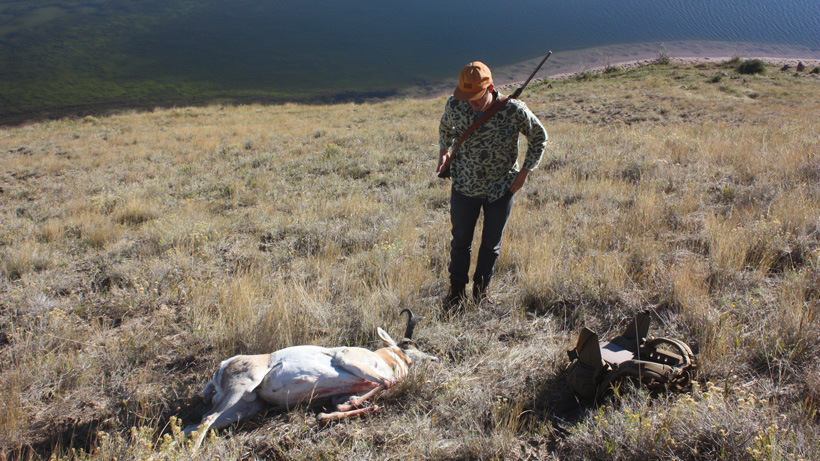 He slid a few feet down the hill and came to a final rest a quarter of the way down a grassy slope, 200’ above what I would later learn was an abandoned Uranium mine that had since filled with water.

Jason ranged the shot at 154 yards. We paused to take in the moment and the weight of what had just occurred. This was the first big game animal whose life I had ever taken along with the culmination of many years of reading and imagining what this would feel like. 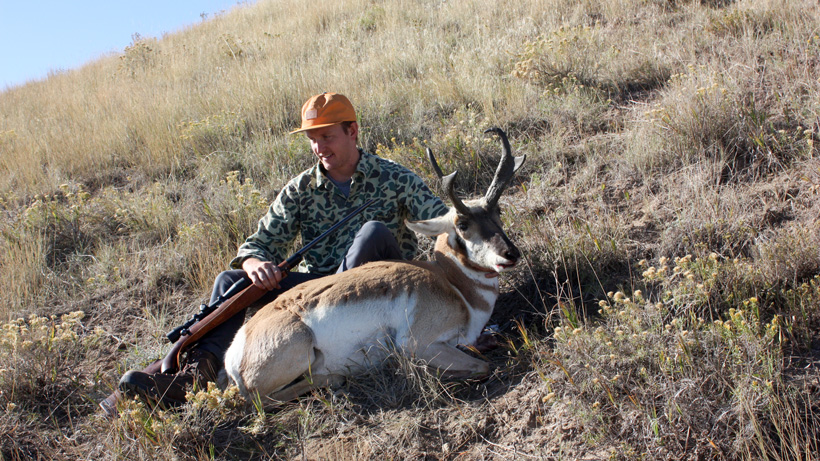 From a strictly "trophy photo" perspective, I have better photos than this, but I felt like this image captured the moment because the reality is that it's a bittersweet affair. 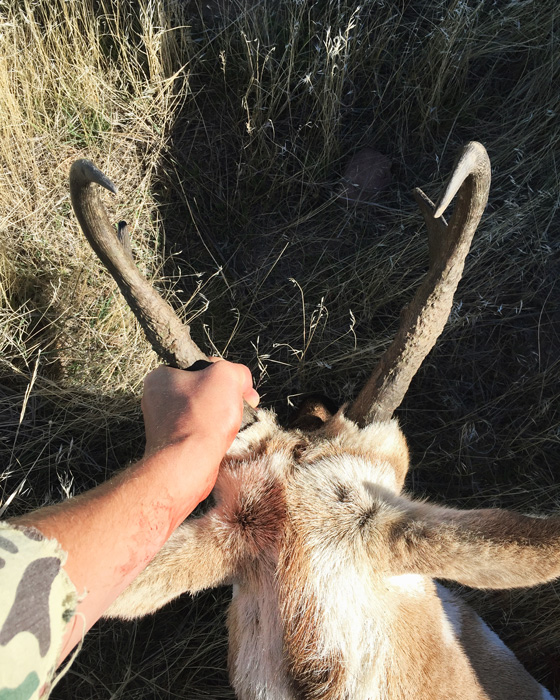 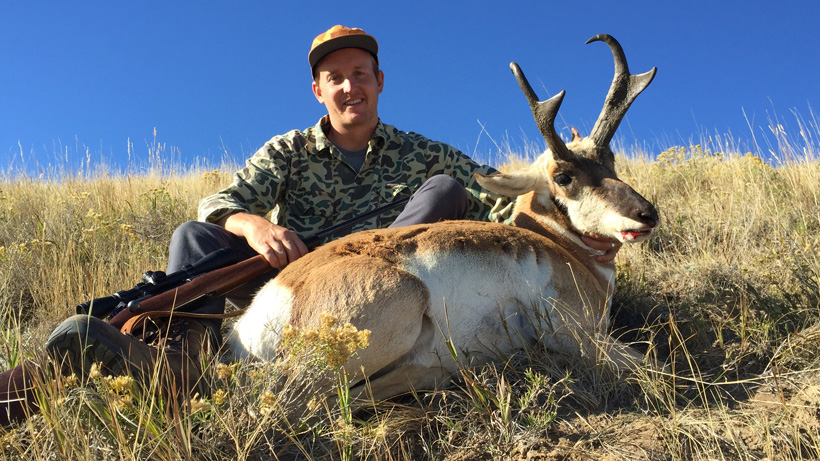 The antelope's life and the hunt are both now over. I am thankful to be headed home with plenty of meat and I am thankful to have been able to do so using a rifle with such personal significance, but there is more at play in this moment than simply those two things. 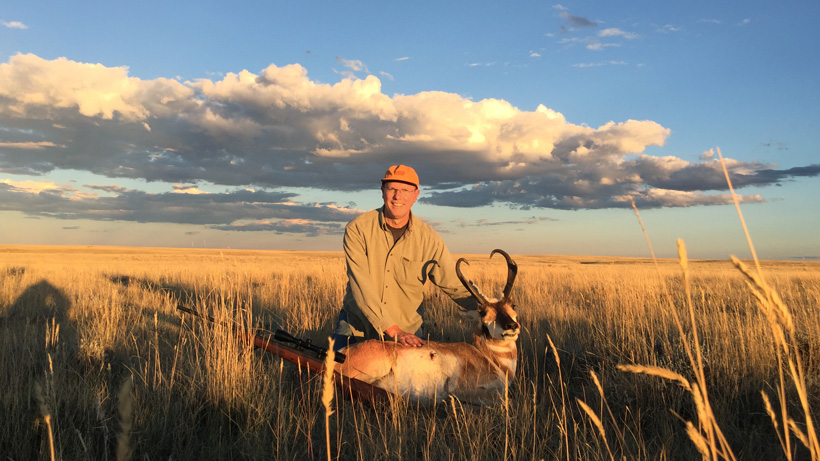 My dad also had success on this hunt. I think I was more excited about my dad punching his tag, than I was about my own. My dad had belly-crawled for about 100 yards to complete his lengthy stalk, right at sunset, with a backdrop so beautiful it looked like a painting. 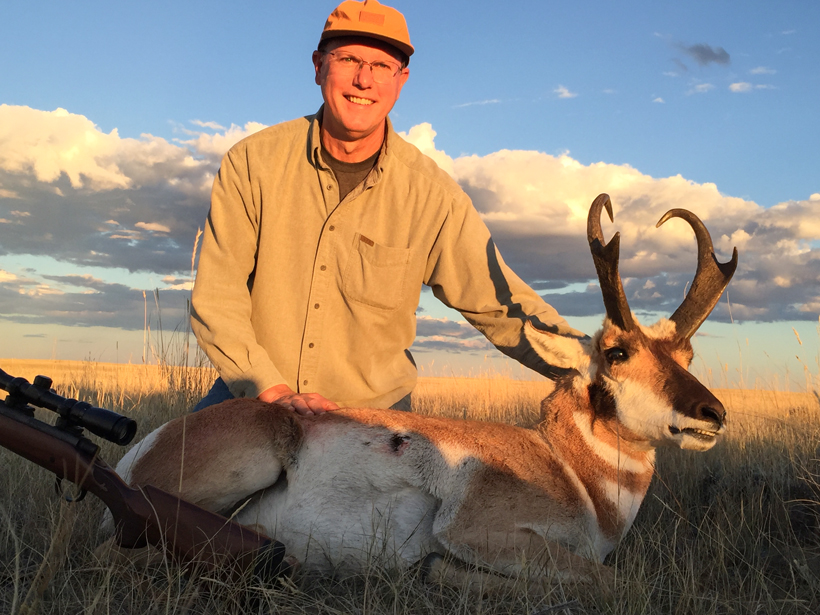 Just look at the hooks on that thing. It was a remarkable ending to a day that I will cherish forever. We were able to harvest the two most impressive bucks that we saw that entire weekend. What more could we ask for than that?

This trip lived up to every hope and expectation that we could have put on it. We each wanted to harvest beautiful representations of the species, and we wanted to do so respectfully and purposefully. The experience was well worth the wait, and was the conclusion of countless hours of discussion.