Hunting the white ghosts of the mountains in British Columbia

I’d always dreamed of hunting mountain goats, but didn’t think the opportunity would ever be possible because of draw odds and the cost of actually buying a hunt. Yet, the opportunity presented itself when my dad found a two-for-one backpack hunt in the steep hills of British Columbia with a fantastic guide, Brenden, in an area that hadn’t been hunted for 25 years. The other man that had booked the hunt backed out at the last minute, which gave me the opportunity to go with my dad on my dream hunt for the majestic mountain goat.

I prepared as much as I could during the few short months I had prior to the hunt by running to be in peak physical fitness and by reading all I could about a backpack hunt for goats in British Columbia. As the hunt approached my hopes were high. But, like previous hunts, I wasn’t sure what to expect or what would happen. Little did I know that the white majestic animal was in my future. 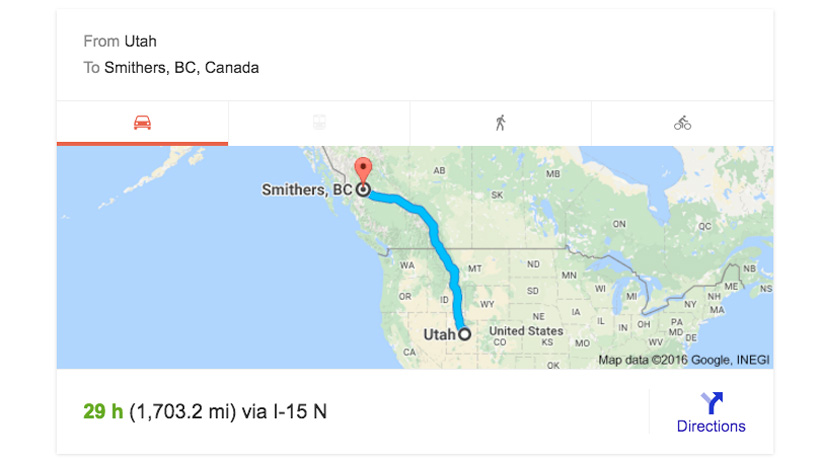 We drove 28 hours in a trip that took us from Utah to British Columbia. My hopes were soaring until we arrived in Smithers, B.C., and the rain, snow, and bad weather kept us grounded from our flight. Another plane had managed to fly the other three hunters and our gear out to another camp in front of us. Finally, after a couple days and many hours of sitting and waiting, there was a slight window to fly out. The pilots called us from the float plane base. It was time to make the hour and fifteen minute flight to our little lake that rested in the tops of the mountains. We made it safe and sound.

It was time for our hunt, but that night it snowed 4” to 5”, covering our tents and blanketing the mountains where, normally, you could easily spot a white billy goat. The snow, which was abnormal for the first day of September,would make the hunt very difficult.

The first day we spent cold and wet with lots of hiking and no animals except for a couple of cow caribou. That night, our guide, Brenden, sent in his wrangler to glass for goats on top of the steep mountain next to our camp. The wrangler was nicknamed “Denmark” because he had traveled all the way from Denmark to learn the trade and he was pretty fantastic. He came back to camp that night with a smile that I will never forget. He had spotted three billes across a canyon on a slide rock hill and they were feeding toward our direction. That night, my mom told me and my dad that we would have sugar plum fairies dancing in our heads. 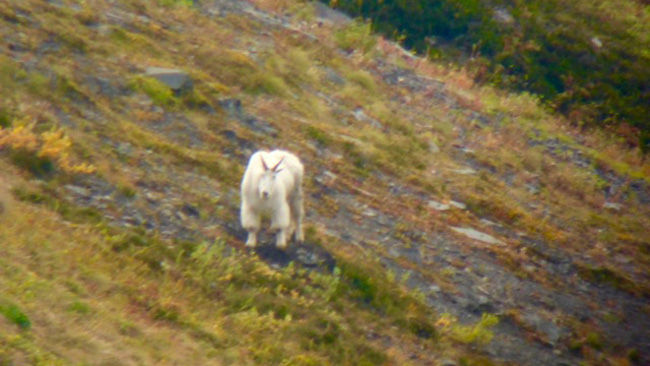 We woke early the next morning and ate little before heading out. We used a small float raft to cross the lake and hiked up the canyon to find the billies. Our guide, Brenden, located them not far from where Denmark had spotted them bedding down for the night. The giant billy was the lowest and the other two billies (one small; another large) were above him higher in the rocks. We waited for nearly three hours while the billies rested. It was a tough wait while the giant billy laid there, hoping that he wouldn’t be spooked off or smell us because our wind was headed his direction. 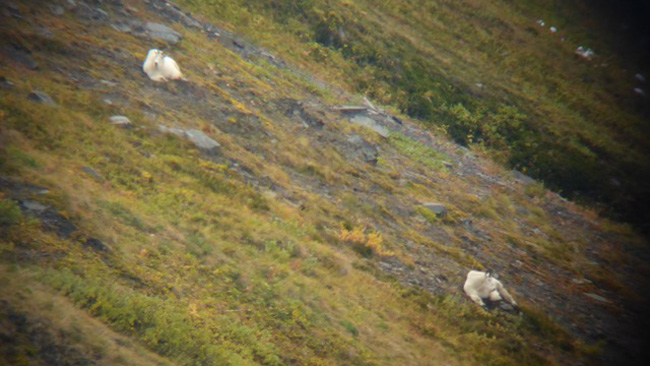 Finally, we had our shot. The small billy turned away from us and we headed up above the giant billy, hoping to get two of the three. Yet, as we approached the edge of the hill to see them again, the billies had decided to get up and move. Directly above us were the two smaller billies. They were only a couple hundred yards away, but the giant billy was nowhere in sight. It was time to make a move. 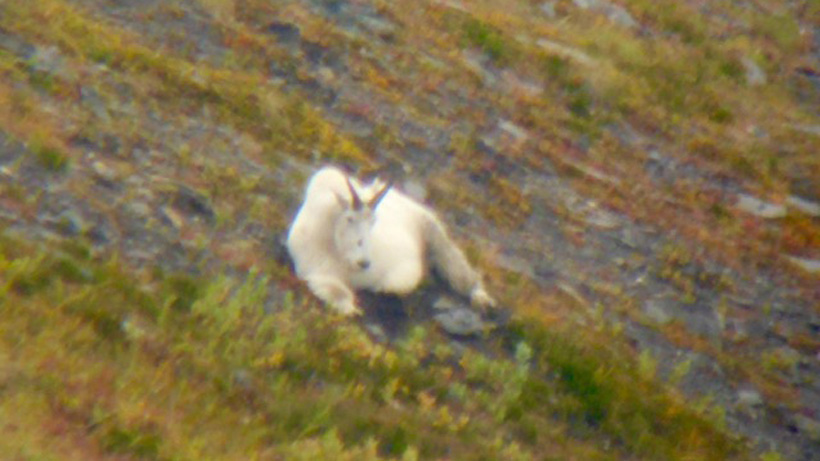 Our guide, Brenden, took my dad toward the two billies while I headed with the wrangler toward the giant billy. We hadn’t covered a hundred yards before I heard my dad shoot. The giant billy was nowhere in sight and I was pretty distraught. I looked and looked without seeing anything anywhere.

“Where had he went?” I thought over and over. He had simply disappeared.

Finally, Brenden returned. He said that he wasn’t sure if my dad had shot a billy. We decided to keep looking for the giant billy, but, eventually, we gave up our search and headed back to my parents to find my dad’s goat.

My dad was sure that he had hit it with a 285 yard shot while it was moving. We headed out to find it with my parents a bit behind, trying to keep up. When, all of a sudden, below us where we expected to find the billy that my dad had shot was, instead, the giant billy. I couldn’t believe he had somehow sneaked around and below us. I got three off hand shots at him before he rounded a hill. I was completely sick. How could I not have connected with one lucky shot at the goat? Little did I know that I had. I had hit him low and we took off running as fast as we could after him on a slick and steep rocky hillside.

Brenden kept telling me that if we kept going we would catch him and cut him off of the other goats. We did it and there he was below us, limping slightly. With two great kneeling shots he was done. Boy they are tough animals.

I was so excited. The hunt I had always dreamed of was finally a reality and little did I know what I would find at the end of the rainbow. 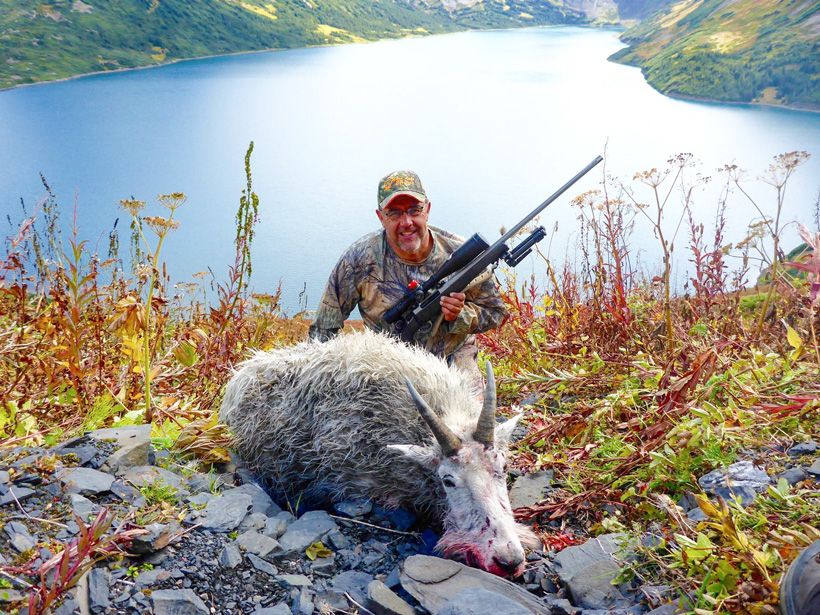 My dad ended up with a beautiful trophy, too! He had made a great shot; somehow he always has to prove his shooting abilities to me.

When we walked up to my beautiful giant billy all Brenden could say was, “Wow.” And “Wow, he is huge. Never in the 40 years of our guiding here have we ever found a goat as big as this.” 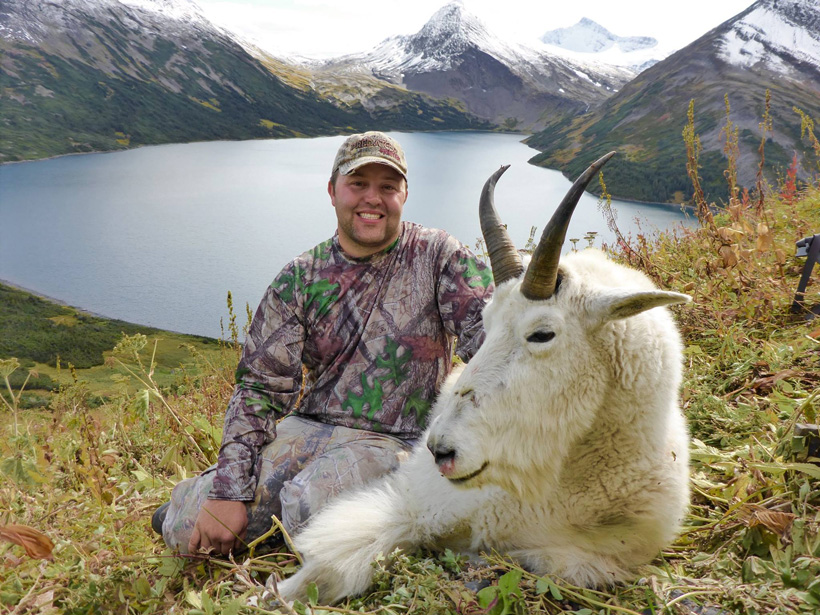 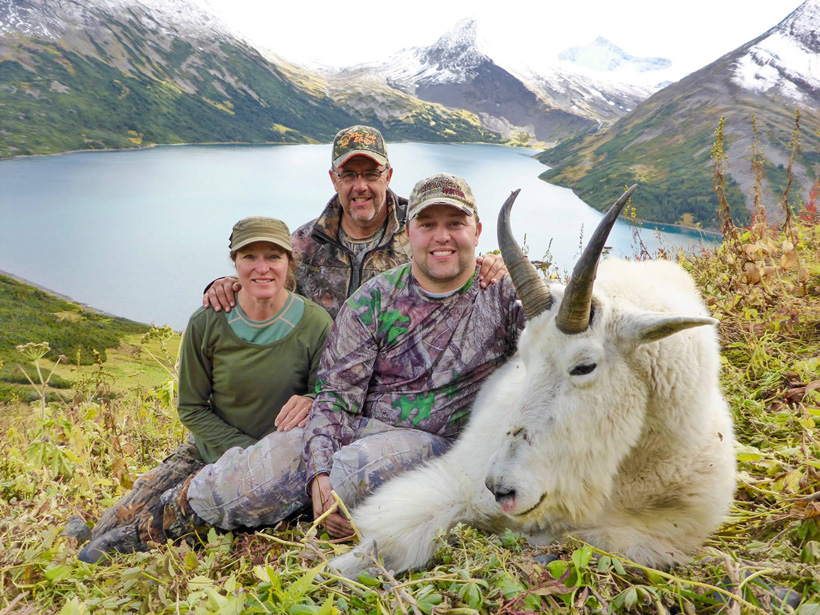 I feel so blessed to have parents that enjoy hunting as much as I do. Hunting, to me, is not only seeking animals to cherish and learn from, but also the beauty in the hardships, joys, and excitement. 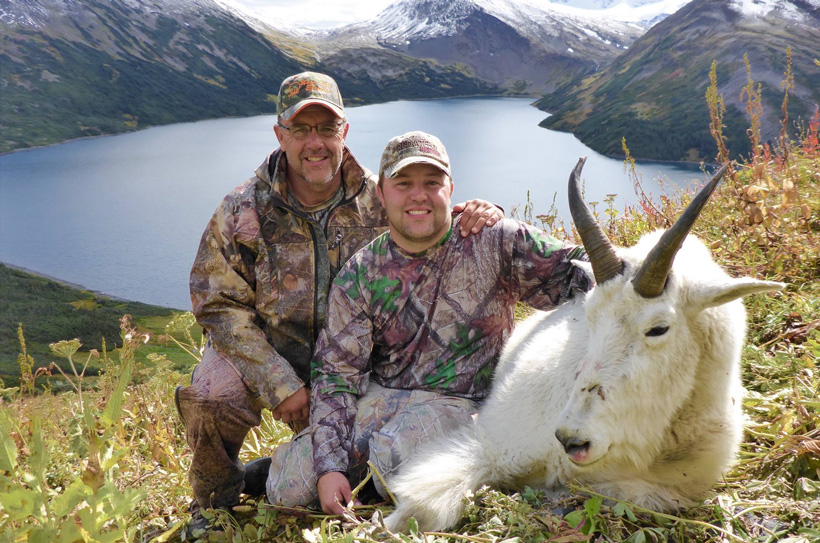 It is the mountains and the closeness to heaven and the luck, handwork of many, and blessings of the Almighty, which, to me, is the most important. I will never forget this experience and will cherish the memories as I tell them to my wife, children, grandchildren, and family for years to come.