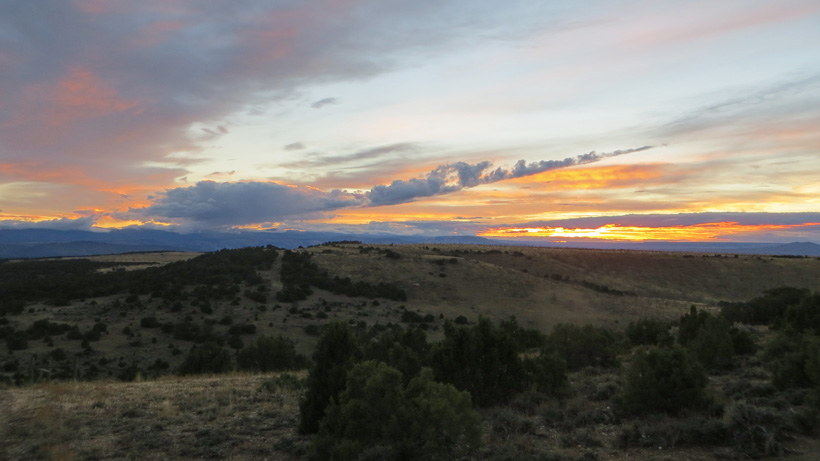 Elk have always fascinated me and I’ve often wished for the opportunity to harvest a big bull, accompanied by a great hunting story. This year, on October 16, 2015, the bull I’ve been dreaming of for years hit the dirt.

I was thrilled when I discovered in late June just after my birthday that I had drawn a great elk tag in an area full of big bulls. What a great birthday present! Except the only downfall was that I’d be going back to school in the fall, which is about 3 hours away from home. It has always been a struggle balancing school and my true passion of hunting. Yet, over the years, we have managed to make it work so I figured this year would be no different.

As the months passed, creeping closer and closer to opening day, I began arranging for my escape from school and into the high country. I decided to take almost a full week off of school and be ready to hunt opening day on October 1, and arrived late in the afternoon two days before the big day. My dad and I took off, set up camp and caught up over a wonderful meal, which always seems to be more delicious when camping.

We set out early the next morning to scout the area and come up with a game plan for opening day. We couldn’t believe how many animals we saw. Not only did we see a ton of bulls and cows, but we also saw an abundance of deer. We settled on what seemed to be a good spot that might hold bigger bulls and decided to start there in the morning.

Opening day was surprisingly not as hectic as we thought it might be. Hunters kept their distance from each other and we set off in search of a big bull. I decided I was going to hold out for bull in the range of 350” to 380”. The area we were hunting was quite large so knowing where to be, and when, was quite a task. It took us a few days to dial in on specific pieces of land where we could find bulls each day. Not having the sufficient amount of time to pattern the area proved to be our greatest challenge in finding a big bull; however, by the time it was all said and done, we knew the area like the back of our hand: every connecting road and every piece of the land.

After five successful days of endless glassing, and having the amazing opportunity to watch some huge bulls from afar, we had to bite the bullet, pack up and get home so I could head back to school. 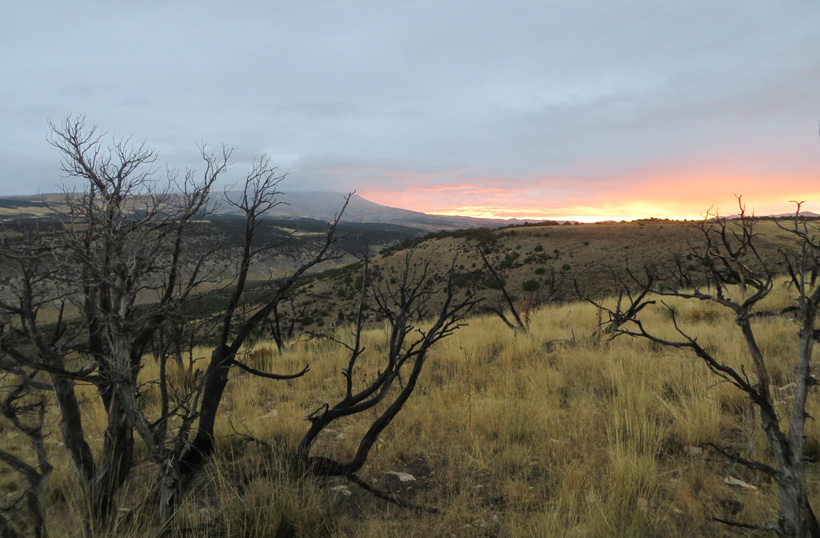 We planned for my return two weekends later in hopes that we could make it happen. We took off early on a Friday morning and decided to head back to a spot where we had seen many large bulls two weeks before. We weren’t that surprised to find that the animals had basically been completely blown from that area. Unfortunately, we were back where we started with no idea where the elk might be. We decided to drive to some previous spots we had seen bulls to glass in hopes of finding a group we could pinpoint and go after.

My dad was interested in a spot he had seen years back that held a beautiful canyon in the bottom. He thought it would be a great spot to glass and also take a closer look at the canyon he was so intrigued by. Minutes after we started glassing, he spotted a huge group of elk that were miles away, running down into a bottom. With over 50 head of elk, my dad could see what looked to be a few decent sized bulls. After a few minutes of watching, we decided to head off in the direction in which they appeared to be going. With our adrenaline pumping, we kept a close eye out for the animals.

We decided to head out on foot toward the bottom where we had last saw them. As expected, we found them traveling through the bottom while we watched hidden behind some junipers. We got a good look at some bulls, one of which was an absolute shooter. We hunkered down and watched until we were in a good position to pursue the big bull that we had spotted. As we eased down the mountain, we found that the bigger bull had separated from the group of elk with a few of his cows. This made our stalk a lot easier. Finally, an opportunity presented itself and I waited with my sites on the bull ready to take a shot. Unfortunately, the cows surrounding the bull refused to give me a clear shot and we watched as the big bull headed out of sight. We grabbed our things and took off in the direction that they were headed in hopes of getting another chance at him, but as we eased over the hill, the group was nowhere to be found.

Over the years, I have learned to appreciate the wonderful but unsuccessful opportunities I have been given while hunting the animals I respect so much. It always seemed that there was something better waiting for me and it just wasn’t the right place or time.

My dad and I jumped in the truck and drove in the direction that the animals had went, hoping to see them again. It wasn’t until we looked miles away that we saw a big group of elk head into the timber and bed down. It was midday and we decided to give the elk a break for a short time and grab some lunch in town.

As we headed out of town back to hunt, happy and full, my dad suggested that we take a different route that would put us on the back side of where we had last saw the elk. I said, “Why not? Every time you’ve suggested we do something different today, we’ve ended up seeing big bulls!” So off we went. 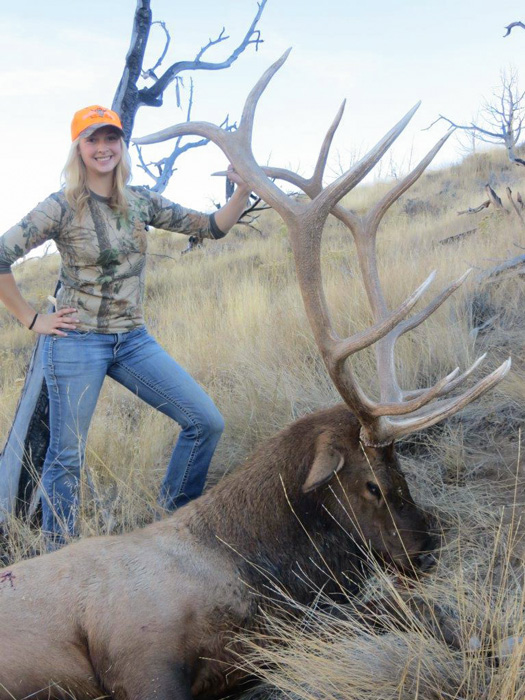 As we were driving the new route, I began dozing off a bit when all the sudden my dad slammed on the brakes and peeled off the road yelling that there were elk. I abruptly came out of my relaxed state, took one quick look at the bull through my binoculars and knew he was the one. I grabbed the rifle and off we went in pursuit of the bull. We finally got closer to the bull and I began setting up for the shot before my dad could even get a spotting scope on him. It was early evening around 4:40 p.m. and the elk were headed up the hill, where they would soon top and go out of sight. The sun was directly in my eyes and I could hardly see through my scope. Between my dad trying to shield the sun from my eyes and me trying to shield it from my scope, I finally got a good enough view and took the shot. 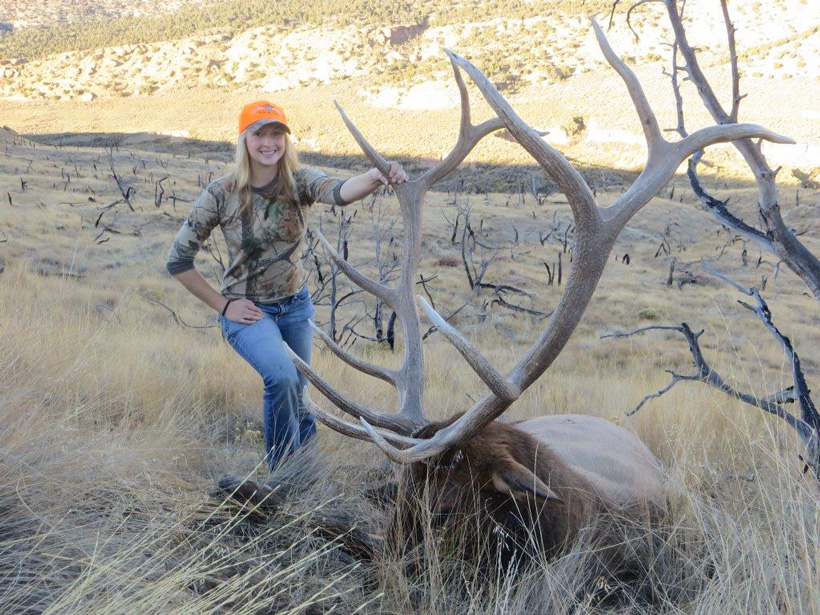 The moment I had been waiting for had finally come. Absolutely thrilled and excited, my dad and I celebrated, then packed our things to take a closer look at my trophy. As my dad positioned the truck better, I heard what I knew to be the awful sound of air spewing from the tire. Believe it or not, he had managed to run over a lone bush and its thorn pierced the tire. We decided to change it after we dealt with the bull. 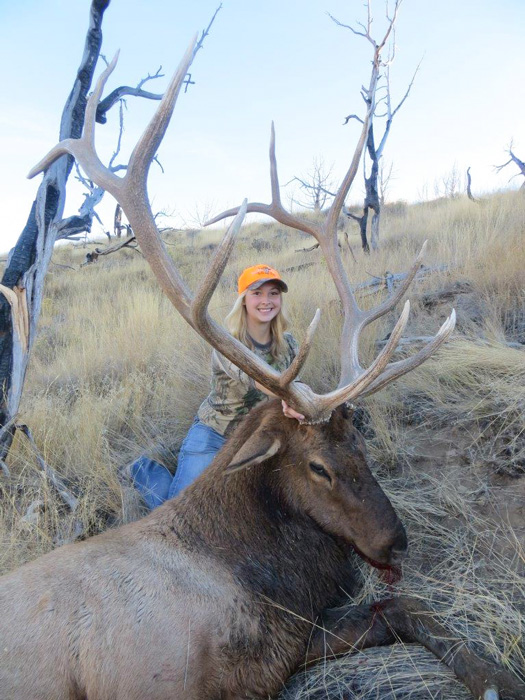 In the midst of all the excitement, and the deceiving looks of the land, we failed to notice the large canyon in the bottom between ourselves and the bull. After quite the hike through the canyon and up a very steep mountain, we got to my perfect bull. We began to realize just how much of a task it was going to be to get my bull home. We decided to take pictures, get the meat cooled off and, with dark approaching, head back to the truck to change the tire that had gone flat.

The next morning, we headed out early to retrieve my bull. It was a long five and a half hours of quartering and packing my bull down the treacherous steep mountain and through the very large canyon with the deep creek in the bottom. Thankfully, my father and I make quite the team and worked hard together to get the job done. Just as I desired, I had harvested a 345” bull at 500 yards and had an absolutely unforgettable story to go along with him.

Awesome story! I have a 9 month old daughter and I can only hope that she and I will share an experience like that one day!

Great bull, awesome that you were able to hunt with your dad.