Hunting is about more than just a kill 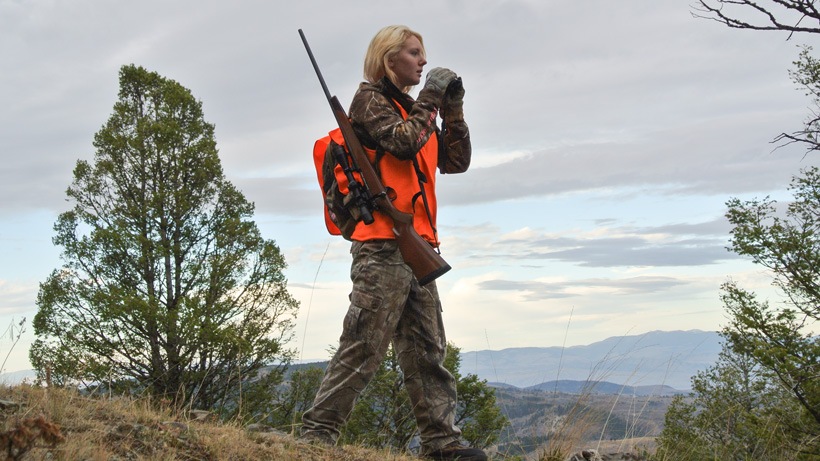 There is absolutely nothing that compares to hunting Rocky Mountain elk. Take one look at me, a 5’ 2” eighteen-year-old girl and you would never guess that to be my sport and lifestyle of choice. Raised in a die-hard hunting family, I caught the fever young and it is far from cured. Chasing elk alongside my father is sacred. Once that musky scent hits my nose or that distinctive tawny hide comes into sight, there is nothing that can keep me from the stalk.

Recollecting on every hunt holds a cherished memory and a story, including the hunts that resulted in no harvest. 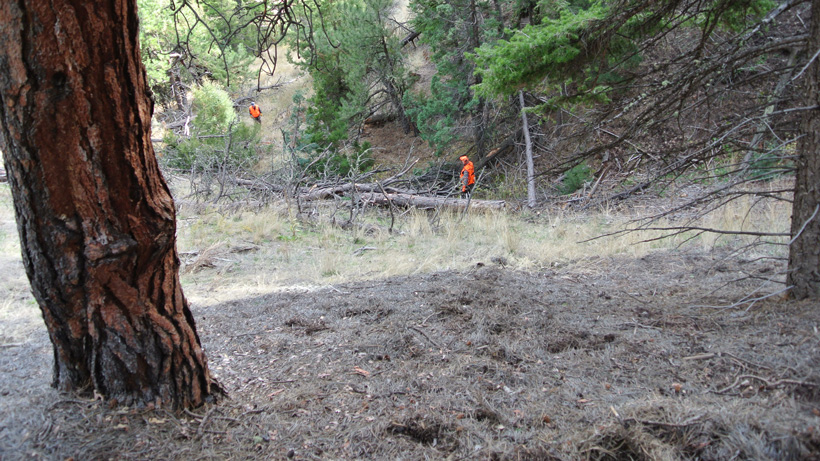 No different than any other opening weekend, my excitement to hit the woods was overwhelming. So much so, I had convinced my parents to let me skip school to stay in the woods an extra day. Opening morning of the 2014 general rifle season was an absolutely gorgeous day. My dad and I got on fresh tracks early and stayed on them all day. That unmistakable elk scent drifted through my nostrils on more than one occasion and the adrenaline never seemed to dissipate. We had hit our early morning lookout at sunup and dove off into the ugliest part of the mountain in search of the rugged and hearty creature. Come the heat of the day we found ourselves upon our favorite rock outcropping that looked perfect for an afternoon nap. In shifts, due to a decent number of mountain lions that call the same mountain home, my dad and I snoozed and glassed so often in the sun. We hung out through the heat and walked out at the end of the day. Despite seeing so much fresh sign everywhere, we weren’t able to see any elk.

Sunday, according to Montana standards, was the exact opposite of Saturday. It rained for most of the entire morning. We dropped straight out of the truck into the mountains, hiking for a muddy wallow no heady bull in the area can resist. From our lookout over the calm water held within the chaotic confines of the mud and elk tracks there wasn’t an animal to be seen and the hunt continued. About two hours from the truck, my dad and I were climbing a hill as straight up in grade as my usual stance. When I stopped to take a quick breather to glass the opposing down slope I instantly saw three bulls. We had seen these bulls during the preseason on a scouting trip and I was excited that they hadn’t left the area. I turned toward my dad and harshly whispered, “Ben,” and pointed towards the elk. His longer stride kept him a usual 15’ feet ahead of me, my dad sprinted back, his eyes searching for whatever I was pointing at. He stood next to me and we quickly devised a plan of attack and headed toward the bulls, adrenaline pumping through our veins. Of the three, we decided all were legal and one was a dandy.

We crossed one ravine after another, losing and regaining sight of the elk as they neared the top of the ridge they were on. Upon losing sight of them the last time, they must have gotten spooked because they were gone when we reached the saddle. We weren’t sure if they winded us or if they were jumped by other hunters but we chased their tracks down the other side of the ridge and quite a ways further. The tracks were sloppy and it was evident they hauled down the other side. Full circle we found ourselves back at the base of the ridge and the task ahead looked rather daunting on our tired legs. Neither side of the saddle is an easy stroll and this side is straight up. My dad made a joke that we had two options: "We can either zig-zag up it or we can zag-zig. Think about it on the way up." I giggled a little and we started the climb.

About halfway up, my dad hit the ground, binoculars in hand, and I followed suit. Through the low in the saddle came a small herd of elk and my excitement skyrocketed. My heart started pounding and I began the effort to control my breathing in preparation for a shot. It was a scene I will never forget. The fog hung low and thick in the trees and all I could make out were silhouettes as the elk made their way through the timber. I quickly got set up at an alley, leaned up against a tree and began watching the elk run through, looking for a bull. Finally, the last elk over the ridge was a little rag horn that I was more than excited to get a chance to shoot. My dad and I watched the bull and agreed that he was legal. We love a great bull as much as the next but at heart we are meat hunters.

I could tell I wasn't going to get a shot where I was so I got up and headed for another tree and alley. I dropped and set up and my dad got ready to hit the cow-call when the bull hit my shooting lane. It took a mere second and my dad hit the call. Dead in his tracks the bull stopped and looked back at my dad, about five yards behind my left shoulder. While the cow-call doesn't work every time, when it does, it gives that split second needed to get off a shot.

"Shoot," my dad whispered as he watched the bull stare at him, but I couldn't. The bull was perfectly broadside to my dad but right behind a tree from my alley.

"All I've got is guts," I replied as I looked at the pot belly and robust stance the young bull had and the tiny sliver of nose visible on the other side of the tree.

Thinking quickly, I got ready for him to step past the tree. The odds just weren't in my favor that day as the bull pivoted in his tracks pointing his rear in my direction and ran off. No ethical shot. We chased after the bull and his harem for a bit but they were long gone into the forest.

That sent us back for the truck. We ended up hitting the same trail we had come in on and our tracks had already been covered up by fresh elk. Unfortunately, we made it back to the truck without seeing anything more. I was still excited for Monday as there were plenty of elk in the area.

On Monday, we never got out of the snow. Unlike the past two mild days, this one was downright frigid and there wasn't an elk to be found. As any seasoned hunter will attest, the elk can just vanish in a heartbeat. Having covered the middle and bottom territory the past two days, we headed above the tree line into the sage. We found a good cattle trail from which the view was endless. Everything looked beautiful under the gray Montana Big Sky.

The hard packed and frozen rocky soil was noisy underfoot as we left our boot tracks in the snow on top of the mountain. Ours were the only tracks all morning so we headed back to camp for a little R&R. By mid-afternoon, my dad and I were sitting around the campfire, hot coffee in hand, discussing the fun we’d had that morning. 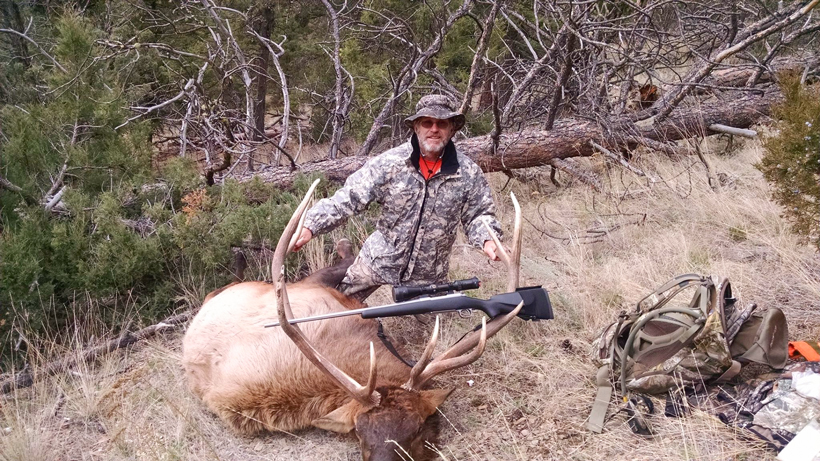 It wasn't long before Bill from the next camp down pulled up to tell us that Randy, a childhood friend of my dad’s, had harvested a gorgeous bull. We instantly asked if we could help on the haul out and Bill thought that we could. 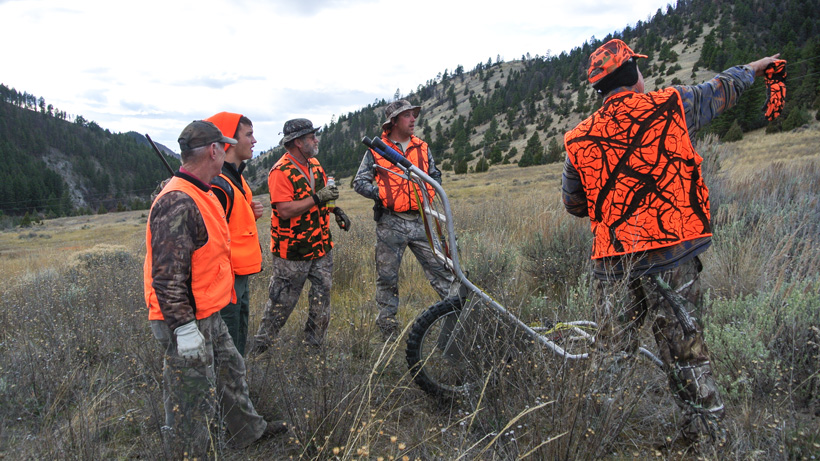 We loaded up the game cart and headed for their camp, the bull not far away. We figured with everyone helping we could get the bull loaded on the cart and back before dark. 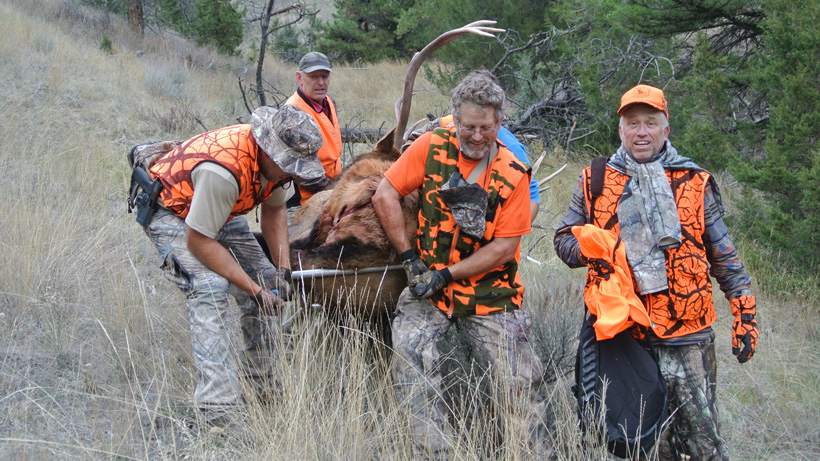 The haul out wasn't easy, with tough terrain and a decent amount of down timber before the open meadow. 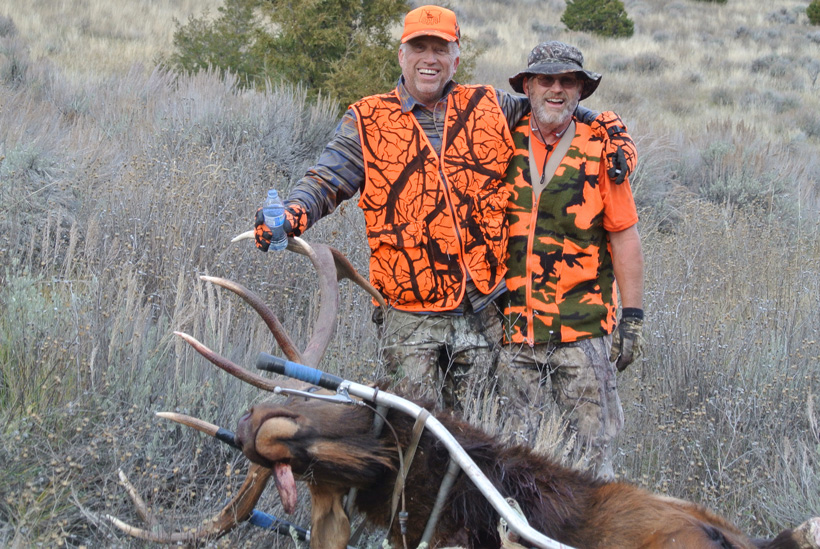 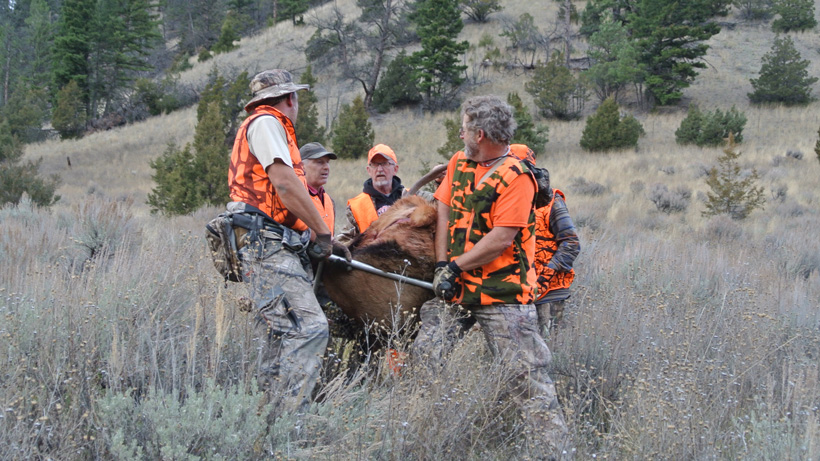 It was a ball of fun though and I am grateful to Randy and all involved for allowing me to be a part of it. 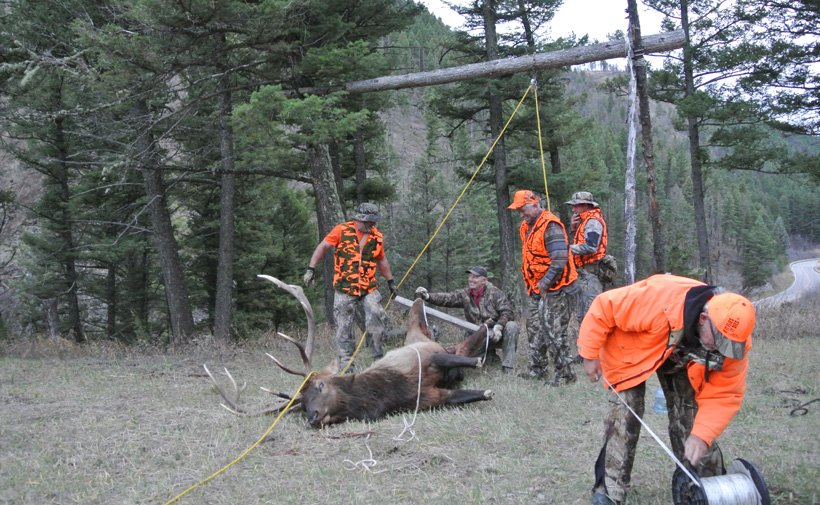 The crew wheeled the entire bull, all in one piece, back to camp and had him hanging in the tree before dark as planned. In the sport of elk hunting, the haul out is often a midnight chore.

Upon reflection of that opening weekend, it was one of the best of my life. To me, hunting is about far more than a kill. At the end of the weekend, my dad and I had three beautiful days in the woods and got to be a part of the retrieval of Randy's 5x6. We had a great time laughing and telling stories at camp and got within range of elk. Even a bad day of hunting is better than a good day of work; these were great days of hunting.