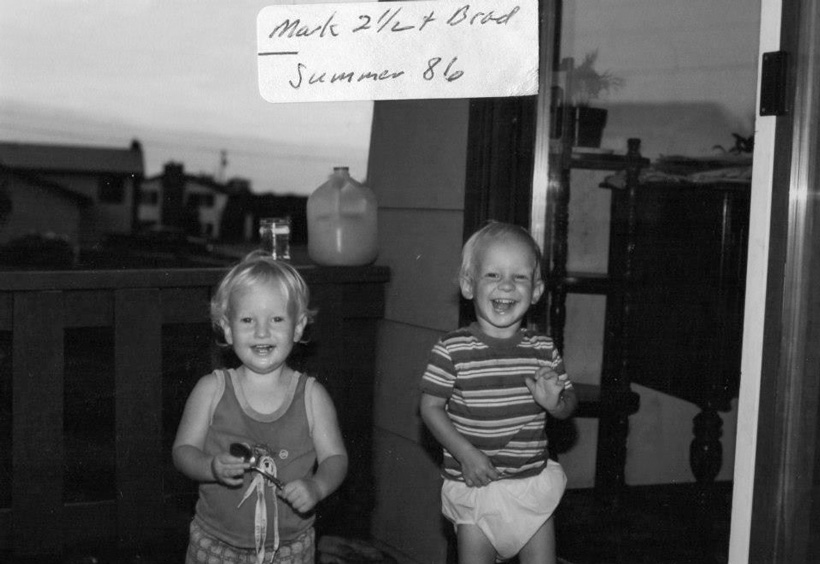 Mark and I have been friends for a long time. From the moment we were born, we became inseparable. We were constantly running around the neighborhood, playing in creeks and causing as much trouble as kids possibly could. As we got older, I moved away, but that didn’t change our friendship. We still found ways to spend time together.

As we both begin pursuing our careers, time spent together seemed to diminish. We made a point to spend every fourth of July together during our college years, catching fish and chasing women. The catching was much more successful than the chasing and we were fine with that. 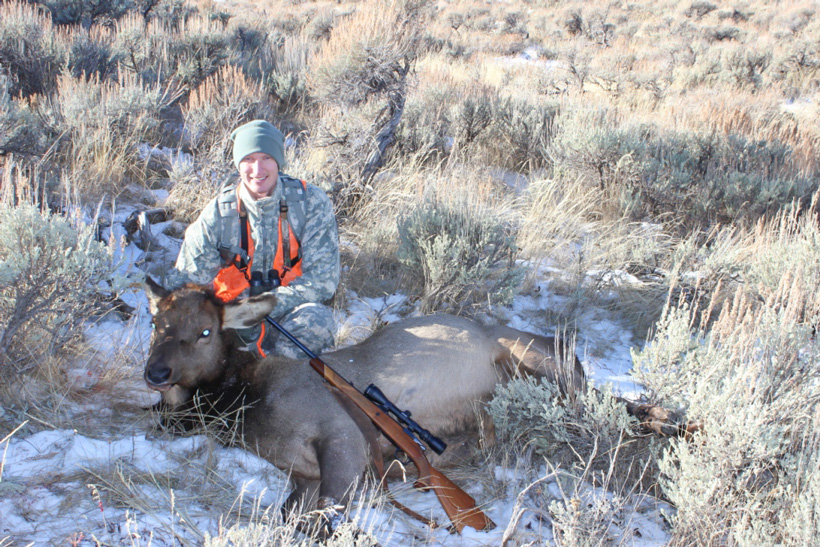 Once I moved to Wyoming it became easier for us to get together and spend more time in the outdoors. During the fall of 2014, Mark was able to harvest his first big game animal: a cow elk.

As the 2015 season crept closer, we made plans for Mark to come to Wyoming for the general deer season. Mark is a veteran of the Navy and currently serves in the Army National Guard. I was excited because I knew that Mark had the physical and mental capacity to put in the time and miles it takes to harvest wild animals. 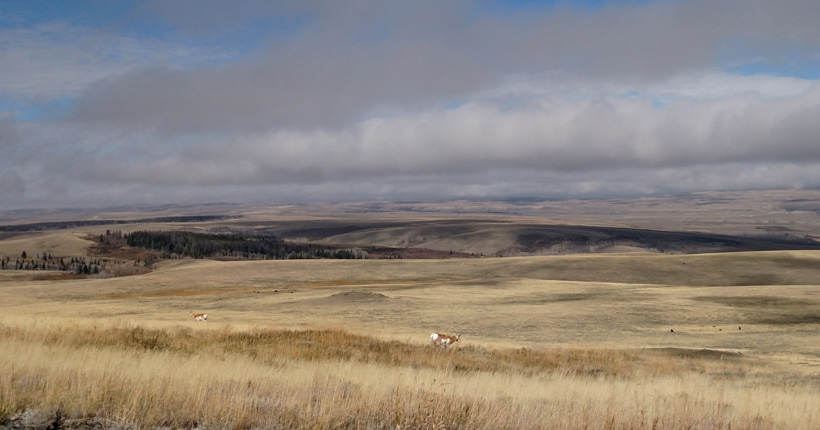 I am battle tested when it comes to the fiasco that is Wyoming general season public land hunting and we were up for the challenge.

We got up and were on the road long before the sun would rise. We rolled up to our spot, parked and started the hike into the area in the cover of darkness. As the sun began to come up it wouldn’t take long before we found deer. 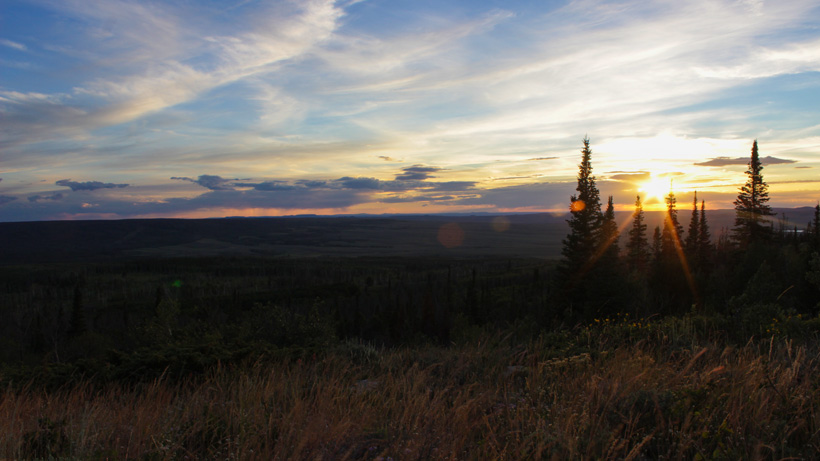 The first 25 deer we looked over were bald (all does). As we walked up to a ridge and peaked over, we spotted eight deer; seven does and one mature buck. They fed over another ridge and we quickly made a move. 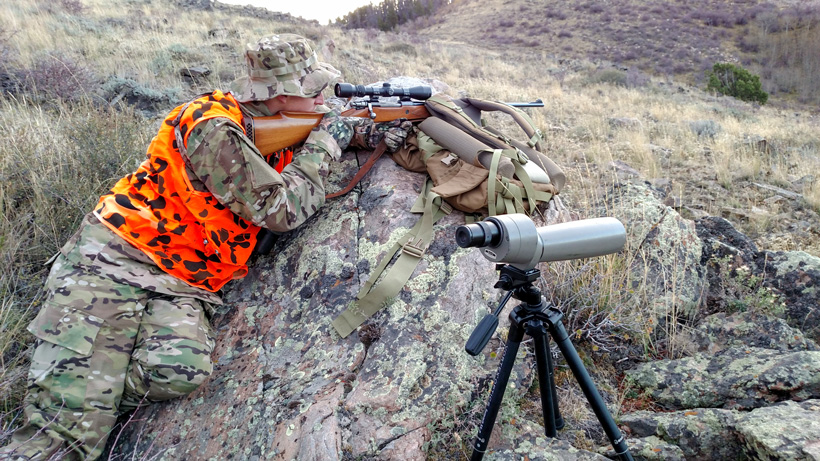 Mark got ready as the deer had no idea that we were there. The buck continued to feed in and out of an aspen stand. We waited for an ethical shot. After 15 minutes, he stepped out at 200 yards. With one shot, Mark had harvested his first deer. 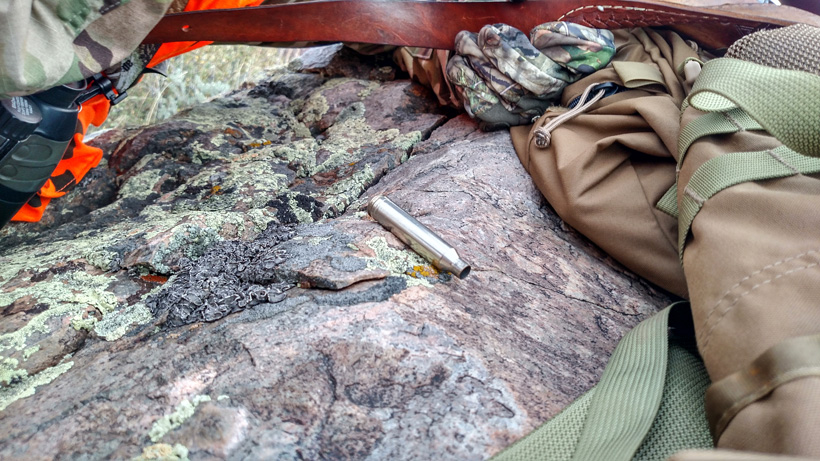 Mark’s buck dropped in his tracks. His sniper school training had paid off in the mountains of the West. After several high fives, hugs and two giant smiles, we grabbed our packs and walked up to his buck for the first time. 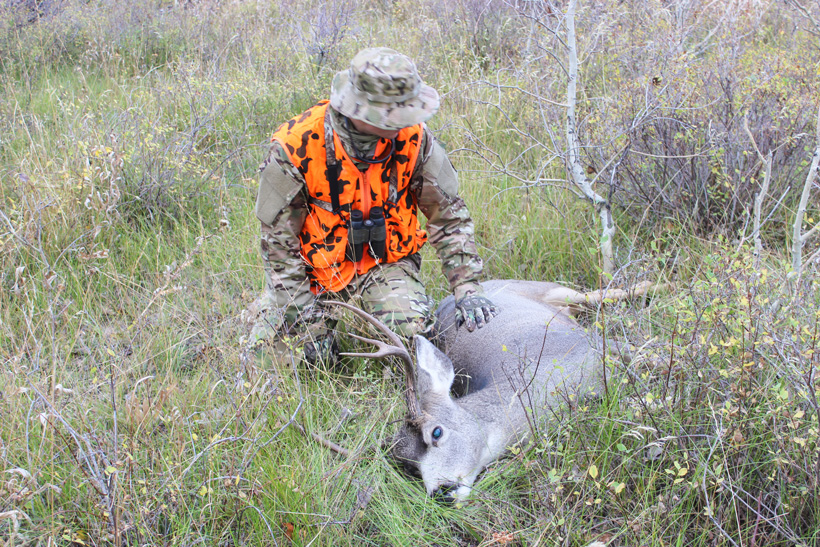 The moment when Mark put his hands on his first mule deer was amazing. It was incredible to sit back and watch him truly take in the moment and appreciate what harvesting a buck really means. 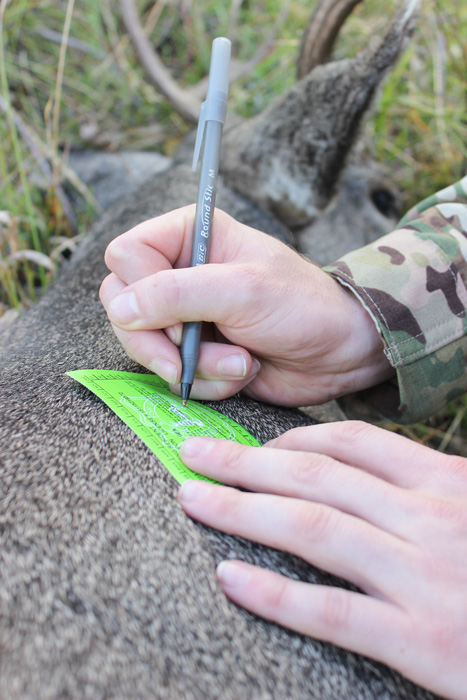 As per Wyoming Game and Fish Regulations, Mark signs his general deer tag upon kill. 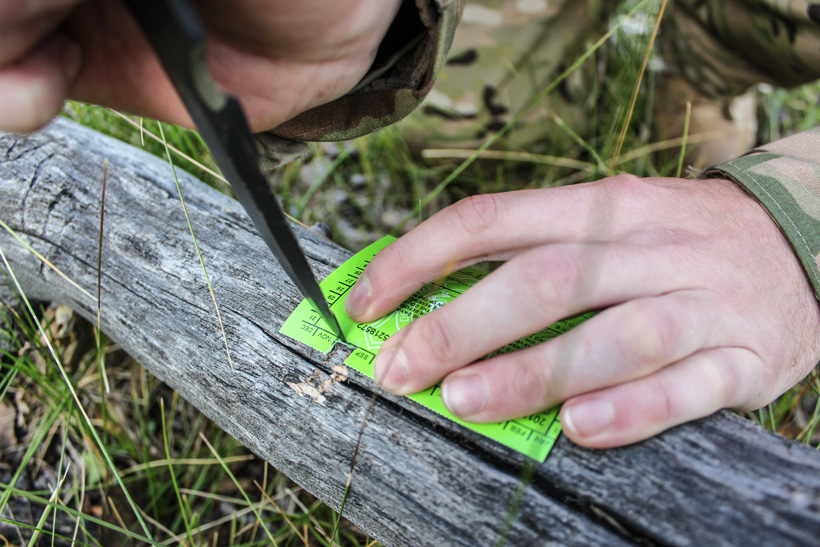 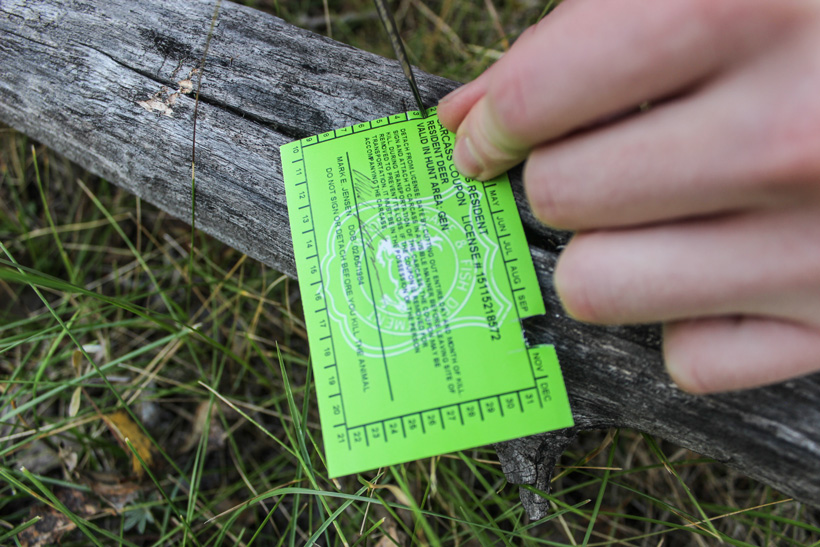 For the first time, Mark experiences the moment of notching the month and day on his deer tag; a moment all hunters cherish. 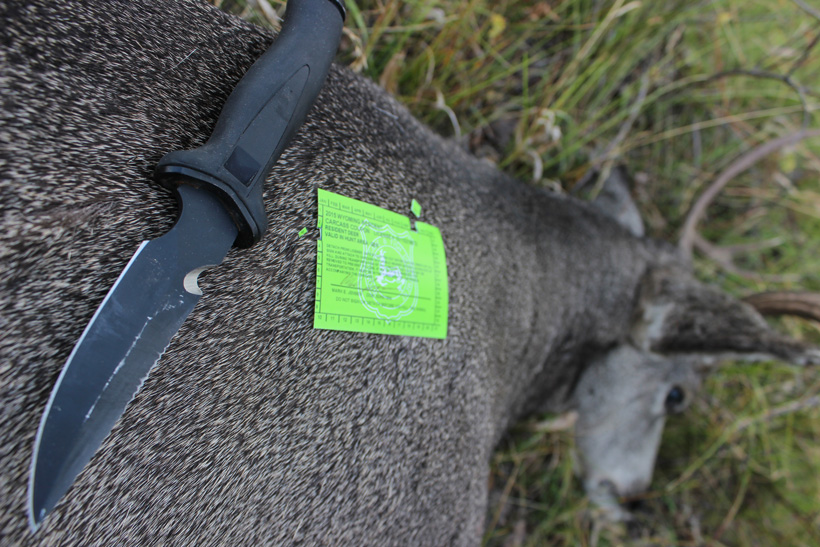 With the tag notched, the work began to prepare the deer for packing out. Mark was very eager to learn the gutless quartering process. 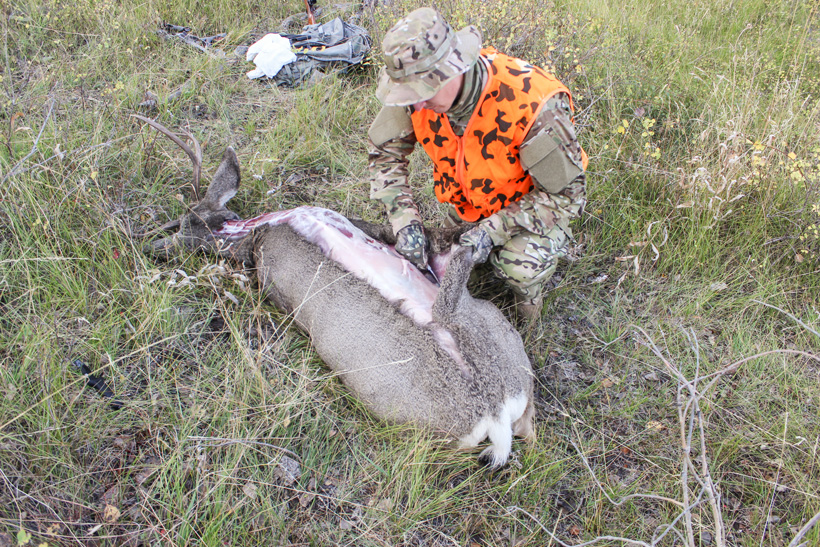 Mark started by skinning the first half of his deer. Once the neck and backstrap were removed, Mark removed the front shoulder followed by the hindquarter, the ribs and then the tenderloin. We rolled the deer over and repeated the process. This is much easier (and cleaner) than gutting the deer and then doing the rest of the process. 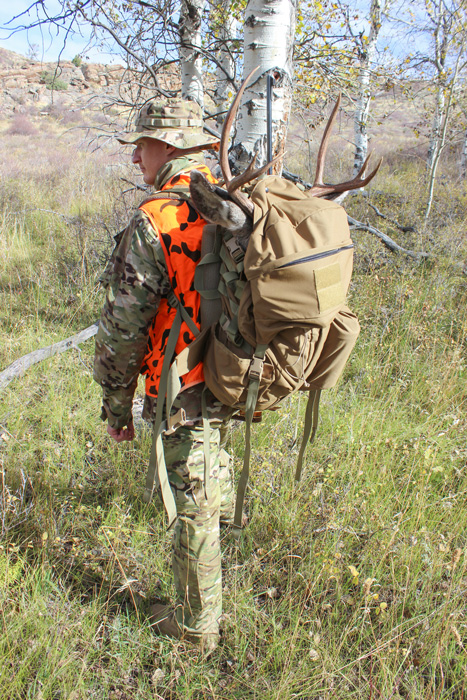 Once the meat was in game bags we were each ready to pack out this hard earned Wyoming deer. After a mile hike, we were happily back to the truck. 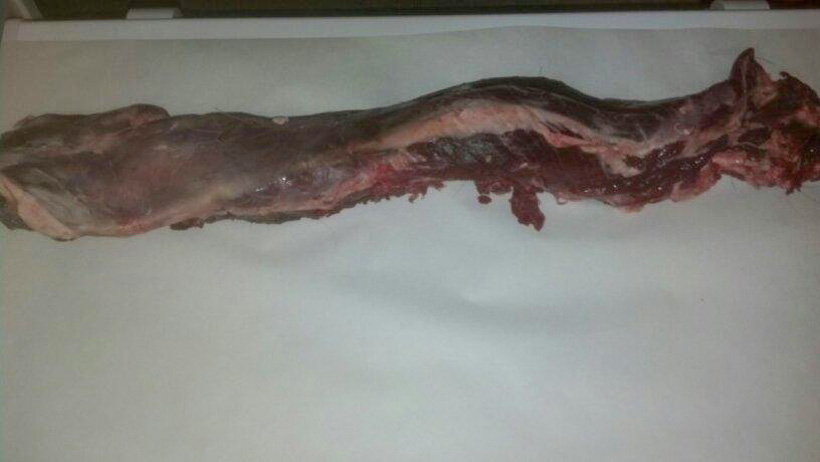 Later at home, Mark fulfilled the responsibility of being a hunter by cutting and wrapping his deer to enjoy the meals of hunting at a later time. 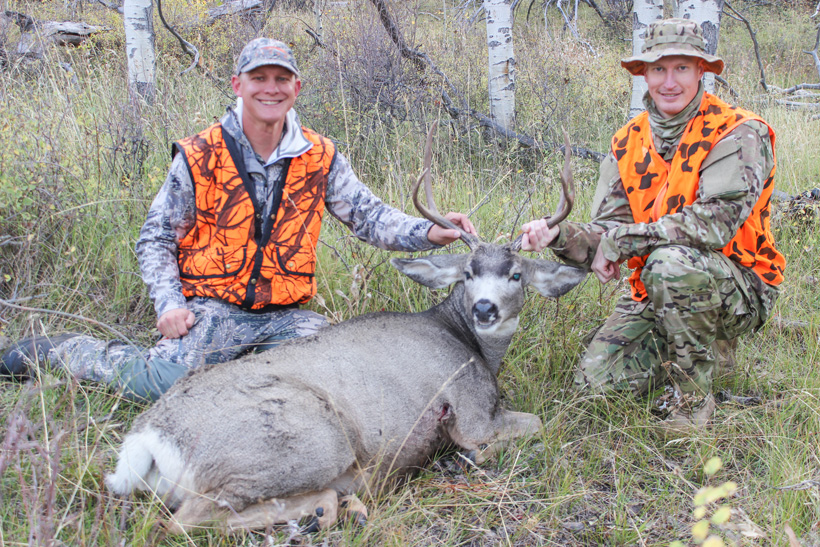 Mark successfully became a true hunter and I was happy to be by his side. He put in the work long before the hunt to be prepared. He hiked into public land and with one shot killed his first mule deer buck. He quartered and boned out his buck, hauled it out on his back and then proceeded to finish his responsibility by cutting and wrapping his venison. Mark will now enjoy venison over the course of the next year, and nothing tastes better than food you had to work for.