Getting close: Bear hunt at under 3 yards 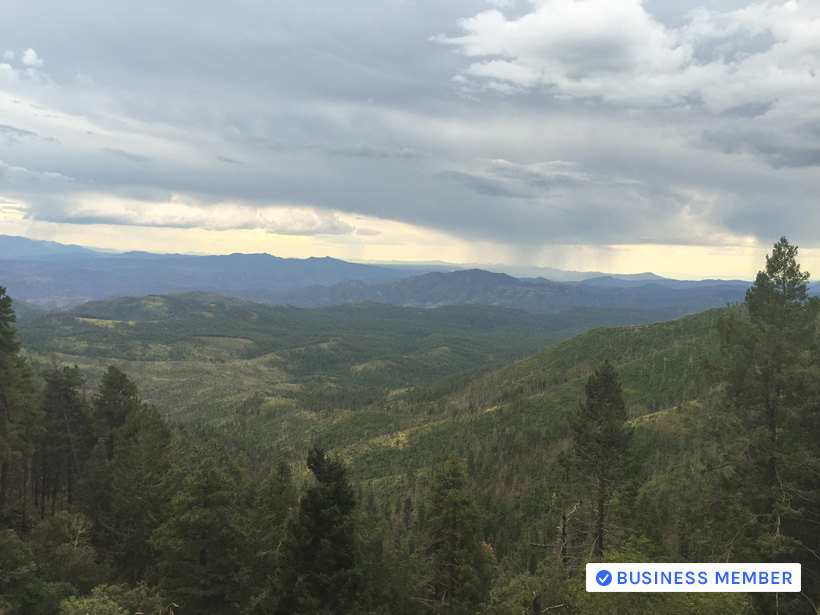 View from the Mogollon Rim, Arizona.

August was finally here. Excited, I packed my bags, my archery equipment, and my truck and headed for Springerville, Arizona. The great state of Arizona allows for amazing archery hunting opportunities in August – giving archery hunters the chance to purchase over-the-counter (OTC) turkey, buck deer (either a mule deer or Coues deer) and black bear. I would be hunting with Darin Emerald, owner of Emerald Xtreme Outfitters, a goHUNT.com Business Member. 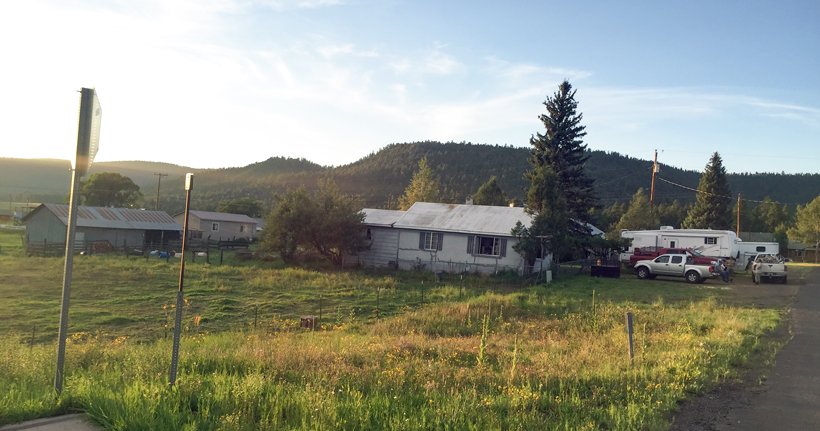 After arriving at Darin’s hunting cabin, and knowing my passion for deer hunting, Darin showed me trail camera pictures of several Pope & Young class mule deer and Coues deer bucks that he had located. We decided to rotate days from tree stand hunting to spot and stalk hunting. As luck would have it, day one ended with a thunderhead moving in and a downpour leaving me soaked. 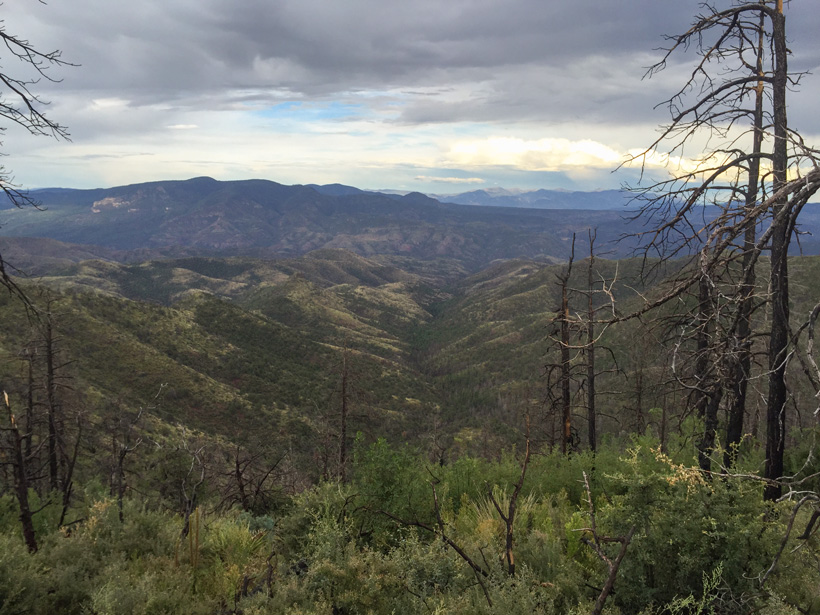 As the sun fought through the early morning of day two, Darin had us glassing several rolling canyons that wound into a roadless wilderness. After looking over several nice bucks, we noticed something surprising: a large black bear. Darin looked at me and smiled. He jokingly said, “We can catch that bear if you want it, but it won’t be fun.” Darin is known for running some of the best hound dogs in the country and it didn’t take me long to agree. Several hours passed as we rounded up hounds, collared hounds, and made a game plan. With the ruggedness of this country we decided that I would take two seasoned hounds down to where we last saw the bear and Darin would walk four hounds along a rim to where we thought the bear would cross. As we started, Darin said, “This is the best time to not try this – once we start we have to finish.” I responded by saying, “I’m in – game on!”

After walking down the first hill with two hounds and my bow, I realized the country was bigger than it looked in my binoculars. But there was no turning back now! After an hour of hiking, I made it to where we last saw the bear. Knowing Darin was above me by about one mile, I released both dogs. The dogs trailed slow in the Arizona heat, but moved faster as we continued. As we planned, the first two hounds trailed past Darin and he was able to turn in four more hounds. It was beautiful music listening to all six dogs scream through the deep canyons – until the bear didn’t stop. We anxiously watched Darin’s Garmin GPS tracking system, which tracks all hounds. Several canyons away, Bodey the lead dog had the bear treed. Seconds later the remaining five dogs marked treed as well.

As my heart pounded with adrenaline and my body shook with exhaustion, I rounded the last bend before looking up and seeing six hounds treeing a beautiful black bear.

Darin tied the hounds to surrounding trees to avoid any injury and gave me the go-ahead to shoot. I wasn’t expecting what would happen next. With the thick brush stripping two arrows from my quiver on the journey to the tree, I only had two arrows left. I pulled back and made what we thought was a perfect 20 yard broadside shot. As the bear moved into a better position in the tree my arrow fell to the ground on my side of the tree.

Darin yelled, “Put another one in him.”

I nocked my second and last arrow and made what I thought was another perfect shot at 20 yards. This time my arrow stayed in the bear. I will never forget what happened next; the bear turned, climbed on my side of the tree and looked directly at me, not the crazy hounds screaming at him or Darin, but at me, like he knew I was the one hurting him. The bear then started to climb down the tree, stopping every couple of seconds to look for me.

I looked at Darin and yelled, “I don’t have any more arrows.” I was so tired from hiking I knew I couldn’t run, we didn’t have a gun, and the bear was well on his way to find me. I remember where my first arrow had landed. It was directly under the bear that was quickly coming down the tree and about 15’ from me. Without thinking it through, I waited for the bear to look away and ran, grabbed my blood and fur covered arrow on the ground, pulled it back and shot the bear a third time, this time at 10’ to 15’. I backed up the hill towards Darin. The bear, having been shot three times now, climbed to the ground and turned, looking at the hounds, Darin, and specifically me. Darin quickly let a hound loose which challenged the bear. The bear angrily charged the dog and was drawn away from us. Luckily, after that, it expired. 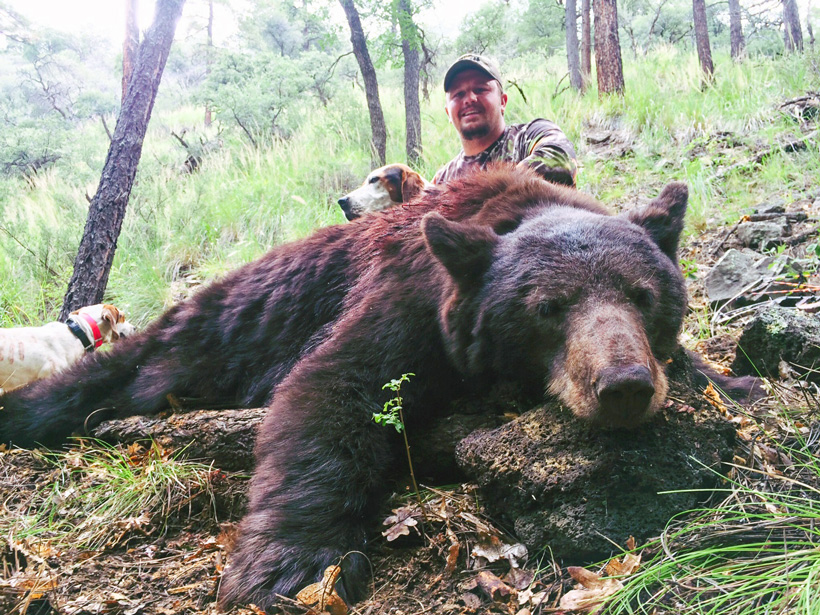 As I sat down next to my bear, I couldn’t help but sigh. We had spent all day chasing this bear, watching incredible hounds work, and it ended with the ultimate rush of a lifetime. It was the most physically and mentally challenging hunt I have ever experienced! 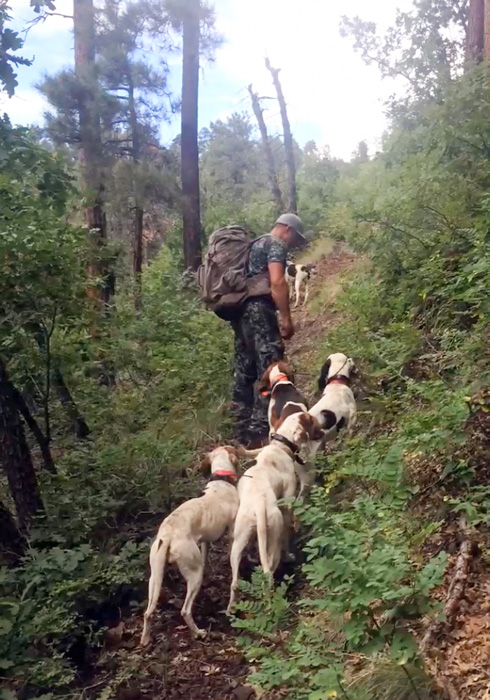 I need to say thanks to Darin for the unforgettable hunt! We always enjoy an incredible hunting experience. I drew a 2015 late Arizona bull elk hunt and have booked Darin - I can’t wait for my next experience with Emerald Xtreme Outfitters!