Dreaming big for the buck of a lifetime 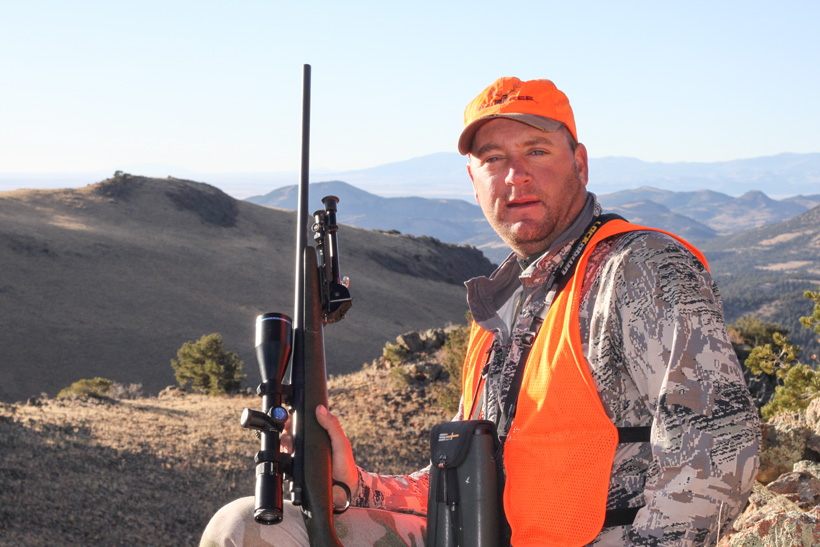 Winter brings short days and long nights, leaving a lot of time to dream of the trophy animals each of us imagine ourselves getting a chance to harvest. The most prevalent trophy in my dreams has always been a 200” mule deer! Each year I have believed that this is possible and always came home shy of my goal. Would this finally be my year?

A close friend, Gayle Eyre, owns and operates Gayle’s Chevron in Richfield, Utah. Most mornings, several of us congregate prior to going to work for coffee and to talk about hunting. Gayle and I try to hunt mule deer in as many states as possible and decided that this was the year to burn some points in Colorado. We chose a unit that we had not previously hunted but had heard it offered a lot of public land to hunt — often even a big muley! We submitted our application and it was just a matter of time until we would get confirmation of what we thought to be true — we were going back to Colorado to hunt giant mule deer!

Two of our good friends, Kim Anderson and Brad Davis, had volunteered to come and help on the hunt. Both are fanatics for mule deer and as good of help as you could ask for on a trophy hunt. Kim even doubles as Martha Stewart in his spare time and makes the best carrot cake you have ever tasted!

The months passed and we decided not to go scouting until just prior to the start of the hunt. Gayle and I relived some of our past hunts while driving to Colorado and talked about what it would take to make this one successful. Optimistic, we talked about how much fun it would be to take two bucks home bigger than 190” though, deep down, we both knew this was most likely a dream. We agreed that if one of us could get a buck over 190” then the hunt would be a success!

We arrived three days early and spent our time covering as much country as possible, trying to get a feel for the land and located where the majority of the deer sign was. We found an area that held a lot of deer sign and did not seem overloaded with hunters. The country we were in was set below the thick pine basins where the deer called home in the summer months and was a mixture of cedars and yellow grass across several small drainages that all seemed to have water running in the bottoms. We saw several groups of deer and a few smaller bucks. We also saw some better bucks not far from the does and it led me to believe the rut was not too far away. Immediately, we decided that this was where we would hunt opening morning.

Opening morning came early as we had to drive a bit to get to the areas we were going to hunt. Gayle and Kim went to one area while Brad and I headed in another direction a couple of miles away. As the morning light came slowly over the giant mountains many miles to our east, I had to stop and take in some of the natural beauty of the moment. It was a brisk morning and frost was readily noticeable on the grass as you walked. As soon as it was light enough to see, we started to see deer. Two small groups fed in the meadow above us, but there were not any bucks present that caught our interest. We glassed higher where the thick pines began and found a group of three 4x4 bucks. I used my spotting scope to check out the bucks, but none of them were what we were after. Brad and I moved on toward a ridge that we had decided to get on and hunt some basins to the east. We found deer in each new basin that we moved into, but nothing that was worthy of filling a tag on opening day. Noon came and we were able to talk to Gayle and Kim on our cellphone. They had good news. Kim had jumped a buck at 200 yards that he thought would be near the magic 200” mark. Gayle had gotten to Kim in time to see the buck disappear into the pines at 600 yards and chose not to try the long shot.

The next morning found all of us back in the same area where Gayle and Kim had seen the giant buck. Just after sunrise, I glassed a buck that I thought might be the same one that they had seen the previous morning. Gayle and I moved to get in a better position, but when we arrived, the buck had disappeared and we never did see him again. That afternoon, we spread out in the same area and hunted until dark with no success.

Back at camp, after a few drinks and a five star meal prepared by “Martha”, we decided that Brad and I would go back to the same area we had hunted opening day. Gayle and Kim would continue hunting where they had seen the elusive old buck.

Brad and I went out hiking early. We had spotted our first group of deer when a shot shattered the silence from the direction of where Kim and Gayle were hunting. I excitedly dug through my pack and retrieved my radio. Gayle came on and confirmed that he was the one who had shot and had gotten his buck! The buck had busted out of the thick cedars just as Gayle arrived, hurriedly trying to get out of the small basin. Gayle had to make a split second decision before the buck escaped and fired on the buck at the first offering. A few minutes went by as Gayle made his way to the buck. When he came back on the radio it was immediately apparent that he had not got the same buck from opening day. I felt my friend’s pain as Brad and I continued on.

About an hour had passed from when Brad and I glassed a basin we hunted opening day. A group of about ten does were feeding on the opposite hillside. As I glassed a little higher, I could see a good buck feeding not far from the does. We both got our spotters on the buck and decided we needed a closer look — we were about 800 yards from the deer and thought we could cut at least 100 yards without spooking it. We moved behind a rocky ridge and hurriedly made our way to the spot we had chosen to look from. 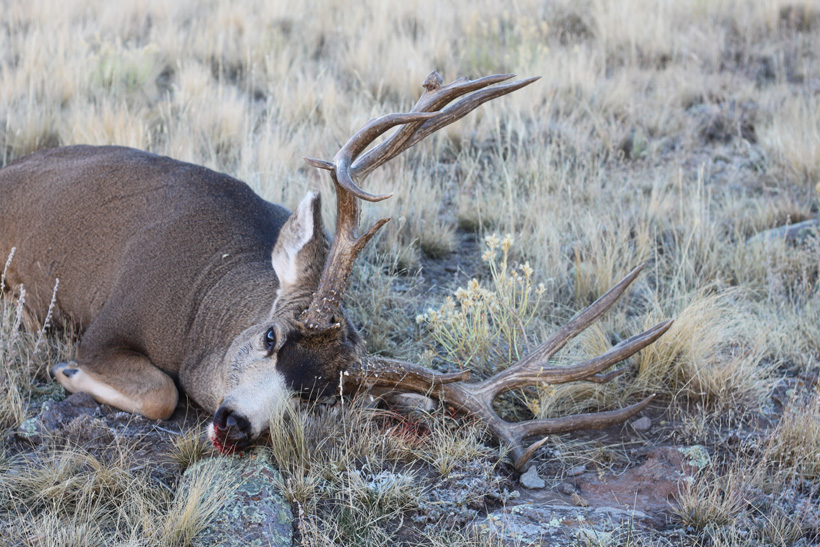 When we popped up over the rocks, we were 690 yards from the buck. Once again, we got our spotters on the buck and began picking him apart. I could make out a couple of extras on the buck’s left side and guessed the buck to be about 24” wide inside. 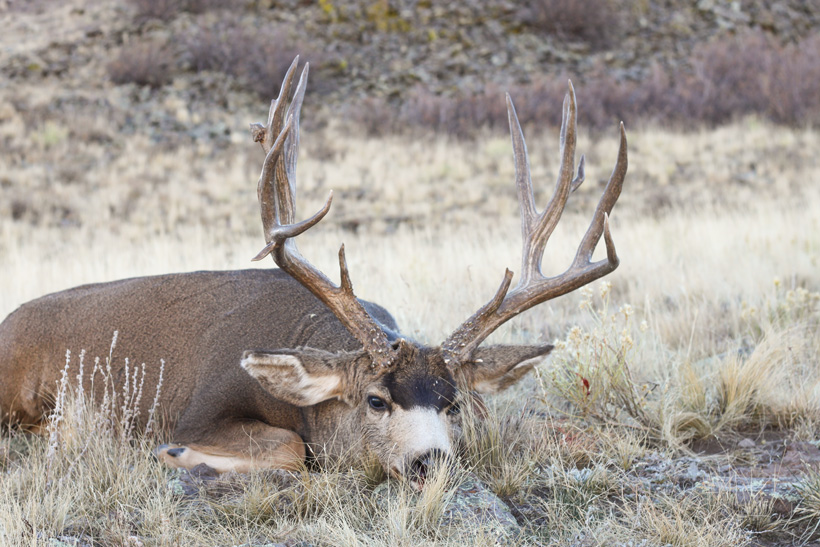 After a couple of more minutes, the deer turned and we could see a small acorn tine on his right side. We talked about what the buck might score while looking through our spotters. I told Brad that I thought the buck would go between 185” to 190” with the cheaters and asked him what he thought. Brad responded that the buck would probably go at least 180”. Brad is always very conservative when put on the spot! We kept looking and I was just about to pass on the buck when I saw another cheater on his right side. I looked to Brad again and asked if he could see the buck’s eye guards. He said, “Yes and they are good.”

Several things crossed my mind prior to taking the shot. I had built the rifle that I was shooting all summer for a long range shot; my father-in-law had an elk hunt starting in just a few days and could use my help; and I had the knowledge that my friend had also filled his tag. That was all it took! I let Brad know I was going to try the buck and got my rifle ready. I turned the Huskemaw turret to the 675 mark and the wind was right to left with a best guess of 10 mph. Using the built-in windage in the scope’s reticle, I settled in for the shot and squeezed the trigger. The 7mm reared up and I lost sight of the buck. Brad, who had been watching through his scope, saw the bullet hit home and whispered, “He’s dead.” I fired a second shot to make sure just as the buck fell over. We took in the moment while talking about the long distance shot and how accurate today’s rifles can be when fitted with highend optics. Little did Brad or I know that the true excitement was yet to come! 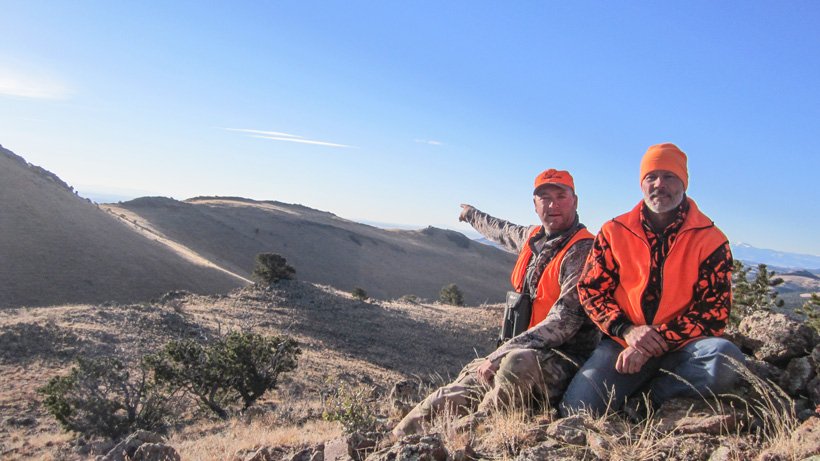 Gayle came on the radio to see if I had been the one who shot. I let him know it was me and that the buck was down. Brad and I took some photos from where I had shot and then made our way around the basin to what we knew was a very fine buck. As we approached the buck, we could see he had great mass and then at about ten yards we could see that the buck was a whole lot better than we first thought. 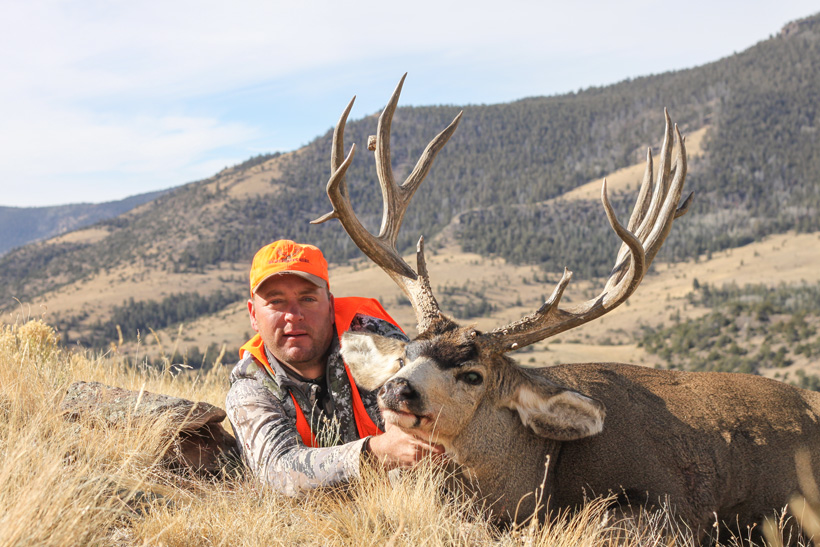 It is difficult to explain in words the emotions that took shape at that moment. During the walk over I had expected to walk up on a great 190” buck, but instead I was looking at a 218” giant! 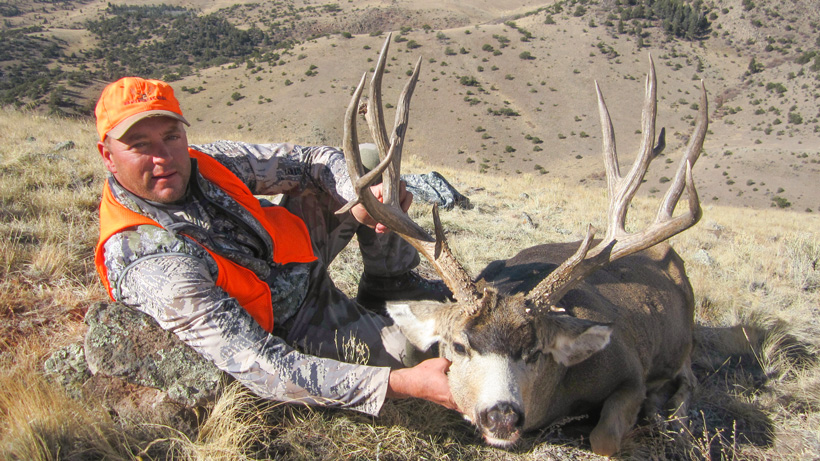 If you happened to be hunting the same area that day, I apologize, because anything within ten miles could probably hear me! Even today as I write this, it is somewhat embarrassing to think how close I came to passing on this buck. 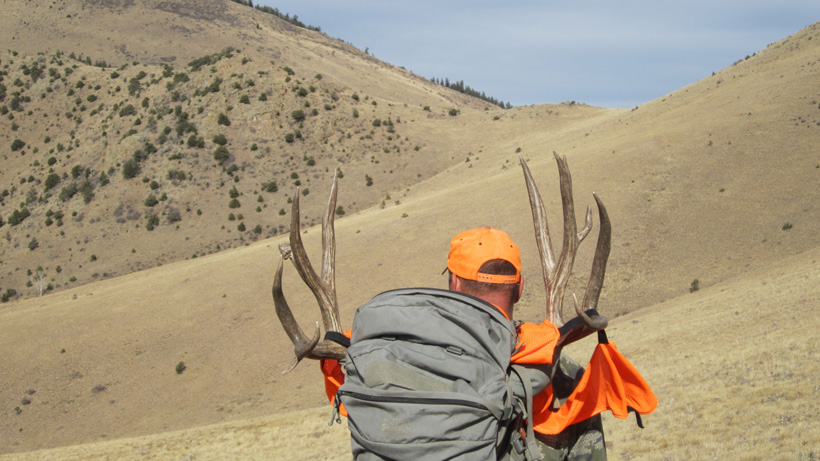 I guess it is times like these that keep us coming back to hunt year after year and shapes the stories we will pass down for generations. When Gayle and Kim arrived a few hours later to help pack the deer out, it only took one look and they let me know that this was the buck they had seen opening morning. 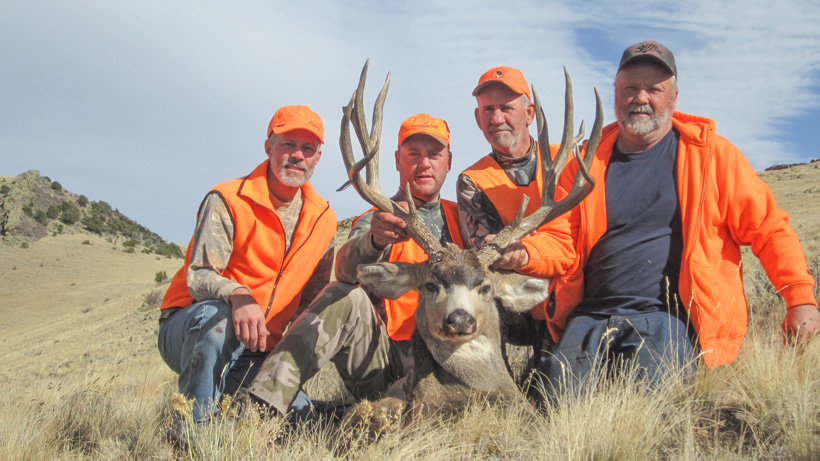 I need to say thanks to the great friends Gayle, Kim and Brad who shared this hunt with me! 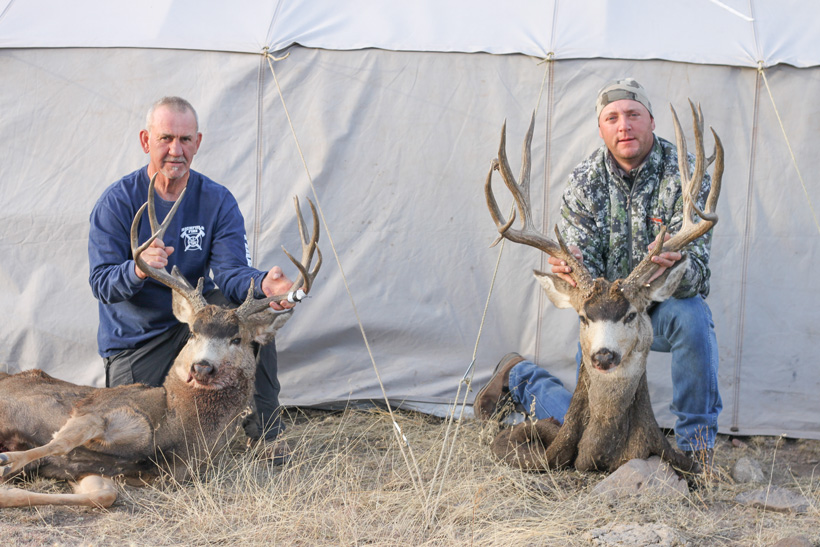 Gayle and Bryant with their Colorado mule deer bucks.

We always have a great camp and the memories will be cherished forever. Also, to my beautiful wife and daughters who are always willing to help when it comes time for me to go hunting!